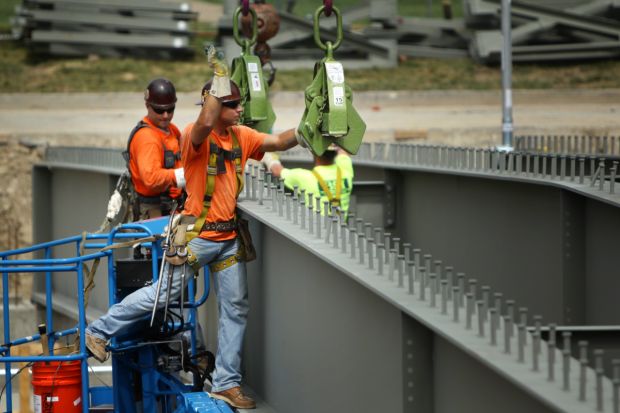 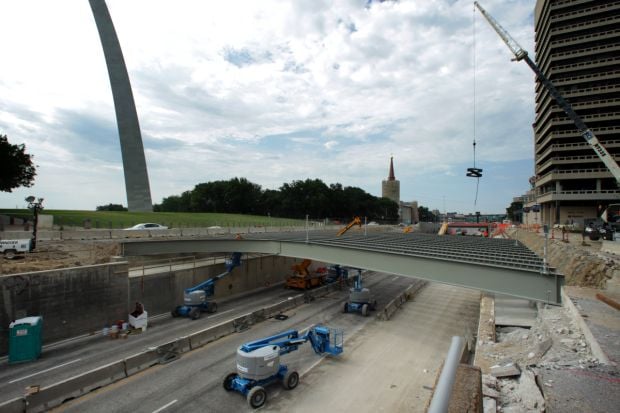 ST. LOUIS • Families who gathered in front of the Gateway Arch on Saturday peered with curiosity not only at St. Louis’ iconic monument but at workers who were planking down rows of girders over Interstate 44.

With Missouri Department of Transportation workers and a KCI Construction Company crew working around-the-clock this weekend, a key element of the $380 million renovation of the Gateway Arch grounds is finally underway.

MoDOT officials closed I-44 at 8 p.m. Friday to begin the process of placing 40 girders across the highway. The girders will support a park over the highway that will physically connect downtown St. Louis to the Arch grounds for the first time.

By 10 a.m. Saturday, 16 girders — each weighing 14 tons and measuring 100 feet long — were in place. The plan is to have all 40 girders secured in time for Monday’s rush hour traffic, when officials hope to have I-44 reopened by 5 a.m.

See a gallery of pictures of the construction.

John Grana, a resident engineer with MoDOT, said they hoped to begin the next phase of construction — pouring concrete over the girders — in a month or two. Officials aim to finish the bridge for the park by the end of this year. After that, officials would begin landscaping the park.

“It’s a beautiful thing to watch,” said Ryan McClure, communications director for the CityArchRiver 2015 Foundation, a public-private partnership that is spearheading the Arch grounds renovation, which includes public agencies like the National Park Service and the Great Rivers Greenway District.

“We’re really happy and excited with how things are going,” McClure said. “The physical connection is starting to happen,” he said, referring to the connection between the city and the Arch grounds that the girders are forming.

Although the park over the highway is a key element of the Arch grounds makeover, there is still much work to be done.

In fact, CityArchRiver 2015 has become somewhat of a misnomer. Officials readily admit parts of the project will not be completed until 2016. The project once had an October 2015 deadline, which marks the 50th anniversary of the Gateway Arch.

Officials now say that another part of the project, the remaking of the Museum of Westward Expansion, isn’t scheduled to be completed until the latter part of 2016. The museum is set to expand so that it reaches downtown with a new entrance facing the city.

Other aspects of the Arch grounds renovation include bike paths and pedestrian walks that will run through the park and down to an elevated Leonor K. Sullivan Boulevard. Leonor K. Sullivan Boulevard will boast two rows of bald cypress trees that will run the length of the road, one strip on each side. It will also feature a 10-foot-wide, two-way bike path, space for movable food carts and table seating with light towers that lean over it all.

The Old Courthouse is also slated to receive a face-lift, as is Kiener Plaza.

Private donations are covering the lion’s share of the cost of the renovation. Only about $69 million of the $380 million cost is public money, with an additional $90 million for the project coming from a sales tax approved in April 2013 by St. Louis and St. Louis County residents.

The CityArchRiver 2015 Foundation is still looking for about $70 million in private donations.

I-44 reopens 9 hours ahead of schedule

The work was part of the CityArchRiver Park Over the Highway project.

Mobin Khan is getting a doctoral degree in urban affairs

Missouri taxpayers may kick in $15 million for Arch museum renovation

ST. LOUIS • Missouri taxpayers may be kicking in an additional $15 million to help renovate the Gateway Arch museum.