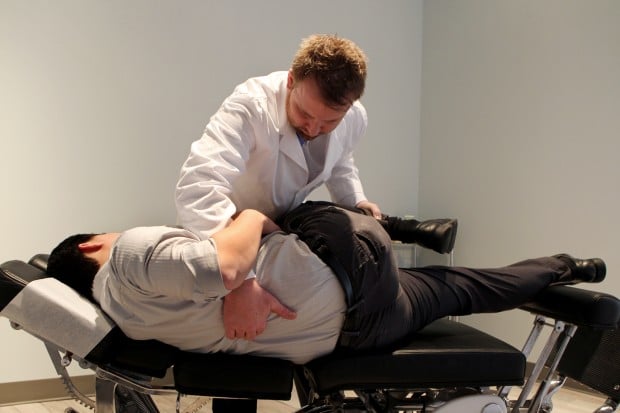 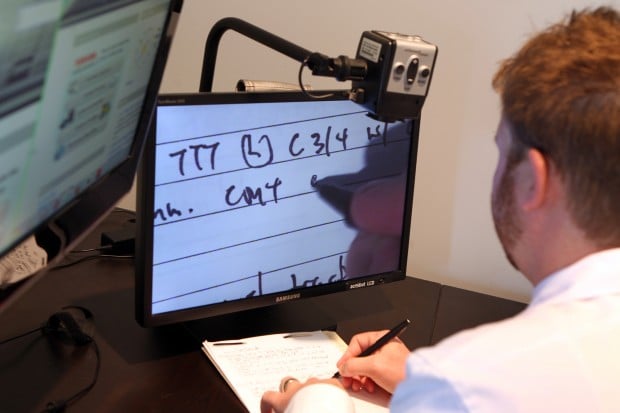 Dr. Terence Crowley uses a magnifier to read and write text in his office at the Midtown Back & Neck Center in St. Louis on Thursday, March 1, 2012. Photo by Johnny Andrews, jandrews@post-dispatch.com 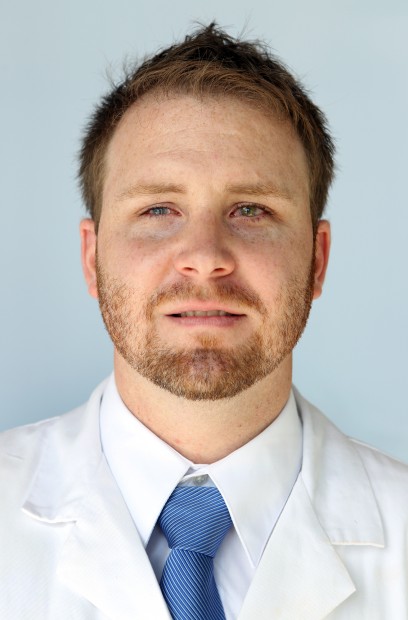 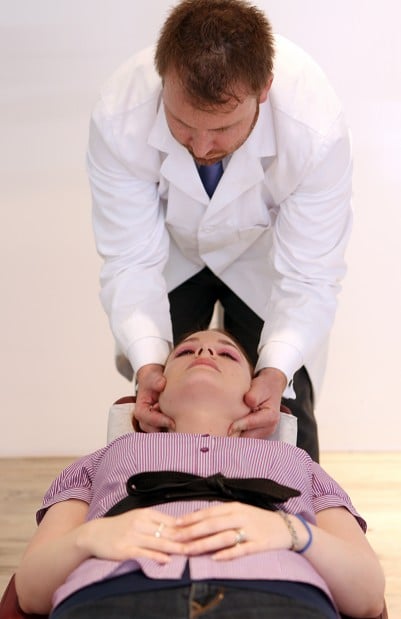 ST. LOUIS • The fact that Terence Crowley can see very little is not something he immediately shares with patients at his new chiropractic office in Midtown Alley.

If they ask, however, he is happy to talk about it.

"From a young age, I knew my vision was not going to be great," said Crowley, who began losing his sight at age 10 as a complication of juvenile rheumatoid arthritis. More than a dozen surgeries and a number of drugs were tried. His vision finally stabilized, but he was left legally blind, missing most of fourth grade as doctors tried to figure out what was wrong.

Fitted with thick glasses, Crowley was able to see well enough over the next 15 years to do most things, including driving a car. But in 2006, two years into the program at Logan College of Chiropractic, his vision began getting worse.

"It's a grueling program," said Crowley, 33. "My cornea started wearing down. A specialist said I should get it replaced."

Crowley agreed to a corneal transplant in his right eye and to have an intraocular lens implanted to improve visual acuity.

"It didn't go well," Crowley said. "The lens was not in correctly and they had to take it out."

He was told the surgery and recovery would force him to suspend school, about four to eight months.

Crowley's plight is unusual in that he pursued his doctorate of chiropractic with severe sight limitations and that he took such an extended break in the middle of the program. There are no national statistics kept on those with visual impairments becoming chiropractors, but those in the field say it is rare.

Professor Donald Christy served as Crowley's academic adviser. In his 30 years at Logan, Christy can recall only one other blind student going through the program.

"Terence was very good about his disability. He asked very little in the way of accommodations for it," Christy said. "That was one of the reasons every instructor, when you mention his name, has nothing but respect for him. We all worked extra hard to help him, but he didn't ask for much."

Sandra Perriello, associate dean of student services, said faculty members were told that all exams and other written materials needed to be in at least an 18-point font (the size of the body type in the newsprint version of this story is 8 points) and that Crowley would be using magnifying devices in class.

"He had the same exact requirements of any other student," Perriello said. "He had to have all the necessary knowledge and skills. It's not like he can bypass that."

What was once Crowley's strong eye now has no functional vision. In his left eye, "I can see OK between 3 feet and 6 feet. Really far away, I can't see. And really close, I can't see."

Crowley's peripheral vision allows him to see outlines of people, but he cannot see eye color or other details.

His wife, Rachel, works a few blocks away, at Hotel Ignacio. Walking to meet her for lunch, he has passed her on the street.

"I didn't realize who she was until she said something," Crowley said. The two carpool to work.

At his street level offices on Locust Street, in the burgeoning Midtown Alley neighborhood known for its cluster of small marketing firms, Crowley sees opportunity. There are many young, busy people who don't like to bother with appointments, so walk-ins are welcome at Midtown Back & Neck Center, he said.

Crowley finds himself starting a business as a debate heats up in Jefferson City on whether funds for a 90-year-old pension for the blind should be used instead for higher education. He says it's a shame cutting the pension fund is even under consideration. He's also starting the business at the same time he is starting a family. He and his wife have an 11-week-old son.

It's hectic, "but we have a pretty awesome support system with family," he said.

For Logan instructor Richard Reinhardt, Crowley first stood out for the way he took notes, "written out in a real bold way" with blue markers instead of the black ink pen other students used. But what impressed Reinhardt was Crowley's ability to work with patients.

Part of that could be that he cannot be dependent on vision, he said.

"A lot of what we do is assess by touch," Reinhardt said. "There are times when I'm assessing, I close my eyes so I have a keener sense of touch."

Crowley said his poor vision requires special equipment to read reports, and ordering supplies can be a challenge. But with the loss of any sense, you rely on other strengths to offset that, he said.

When seeing a patient, "95 percent of it is history taking," Crowley said. "I listen very well."

And he says it's the hands that end up being the most important tool when treating a patient. If patients do notice his impairment and mention it, he assures them he is fine.

"I say the only things that give me trouble are glass doors and cardboard cutouts of people," Crowley said. Humor helps put patients at ease and that's important in successful treatment, he said.

Crowley had to be assessed before being readmitted to the Logan program. Faculty members said there was little hesitation.

"When he came back, he still had the same positive outlook on life," Perriello said. "He takes whatever is dealt him, smiles and just goes ahead."

Only 3.9% of Missourians have received the initial shot as of Sunday.

The St. Louis region's four major hospital systems now have systems for residents to sign up for COVID-19 vaccines.

Experts generally now say the virus will spread, in lower numbers, for years to come.

Lumber Logs collects trees that would otherwise be mulched and thrown away, and mills the most unique and prized into lumber valued by woodworkers.

Where to get the COVID-19 vaccine in the St. Louis area

The crash happened on Highway PP and Highway 30.

Dr. Terence Crowley uses a magnifier to read and write text in his office at the Midtown Back & Neck Center in St. Louis on Thursday, March 1, 2012. Photo by Johnny Andrews, jandrews@post-dispatch.com