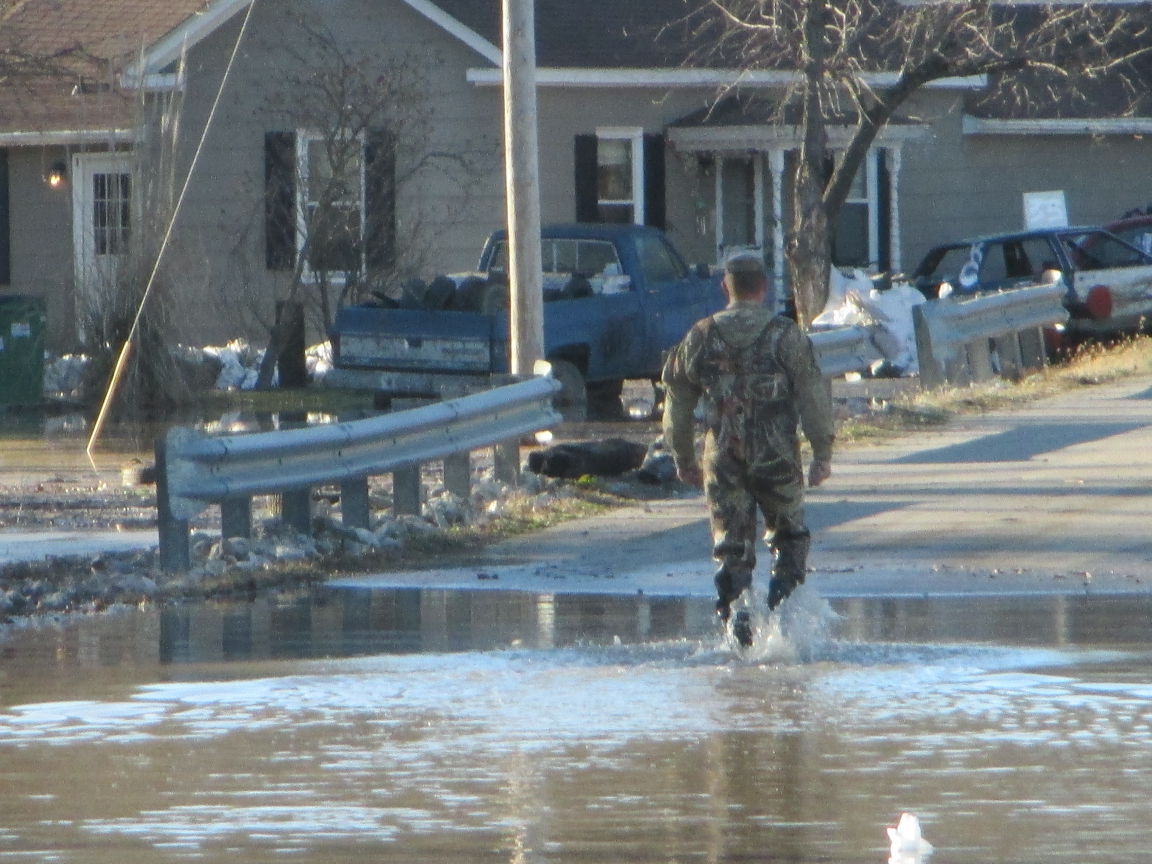 An army officer walks through St. Mary, Mo. on Friday 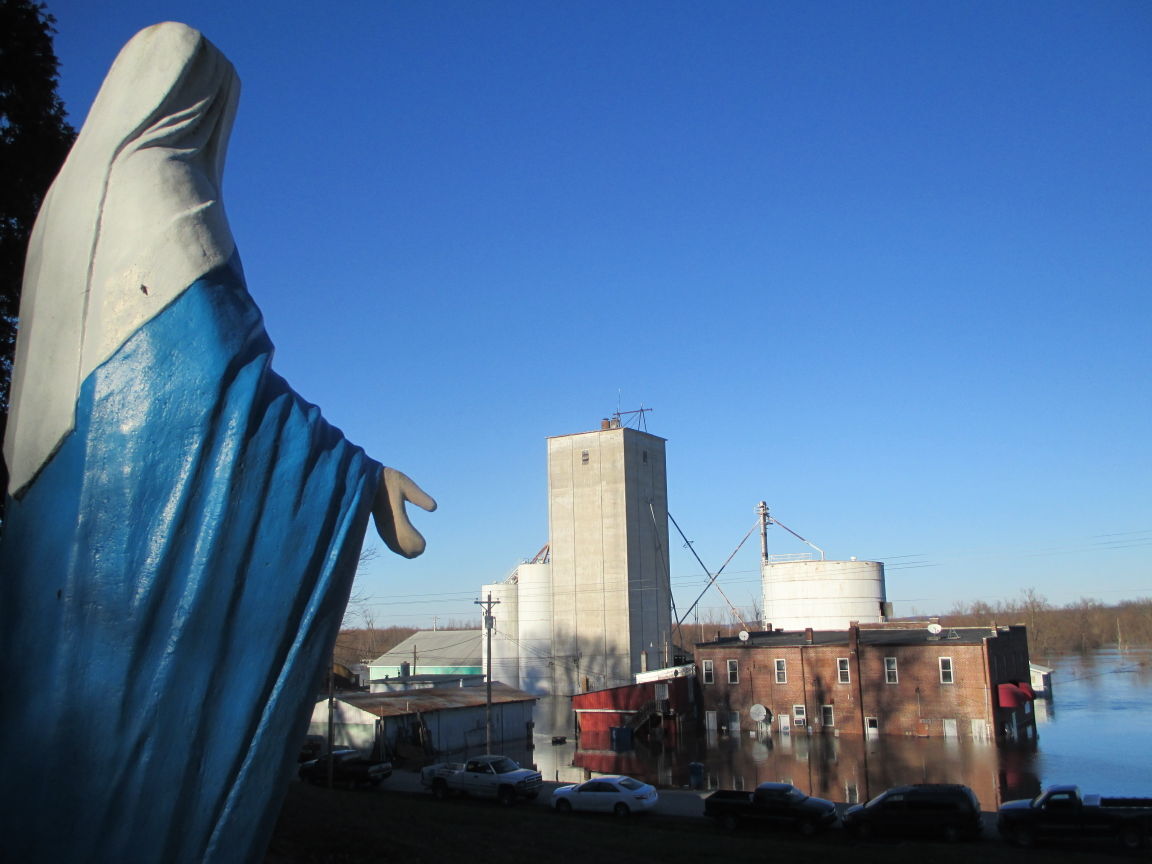 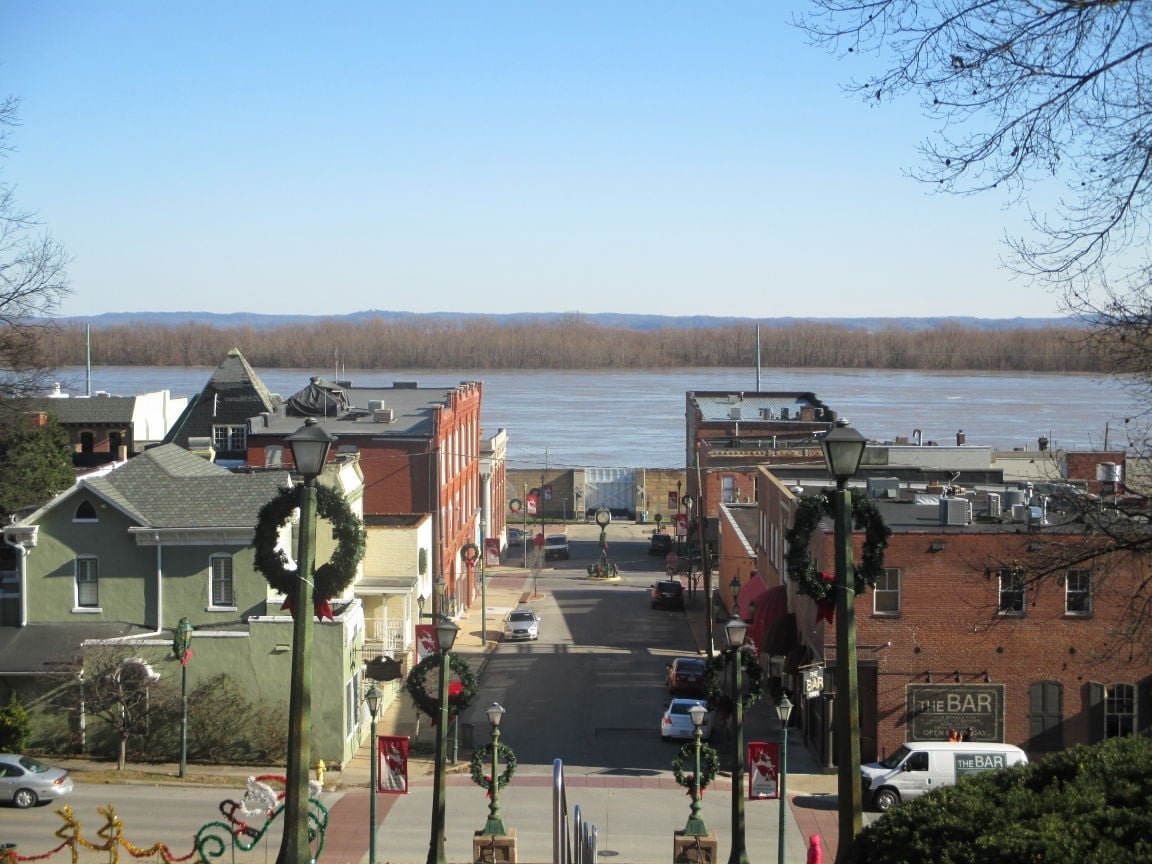 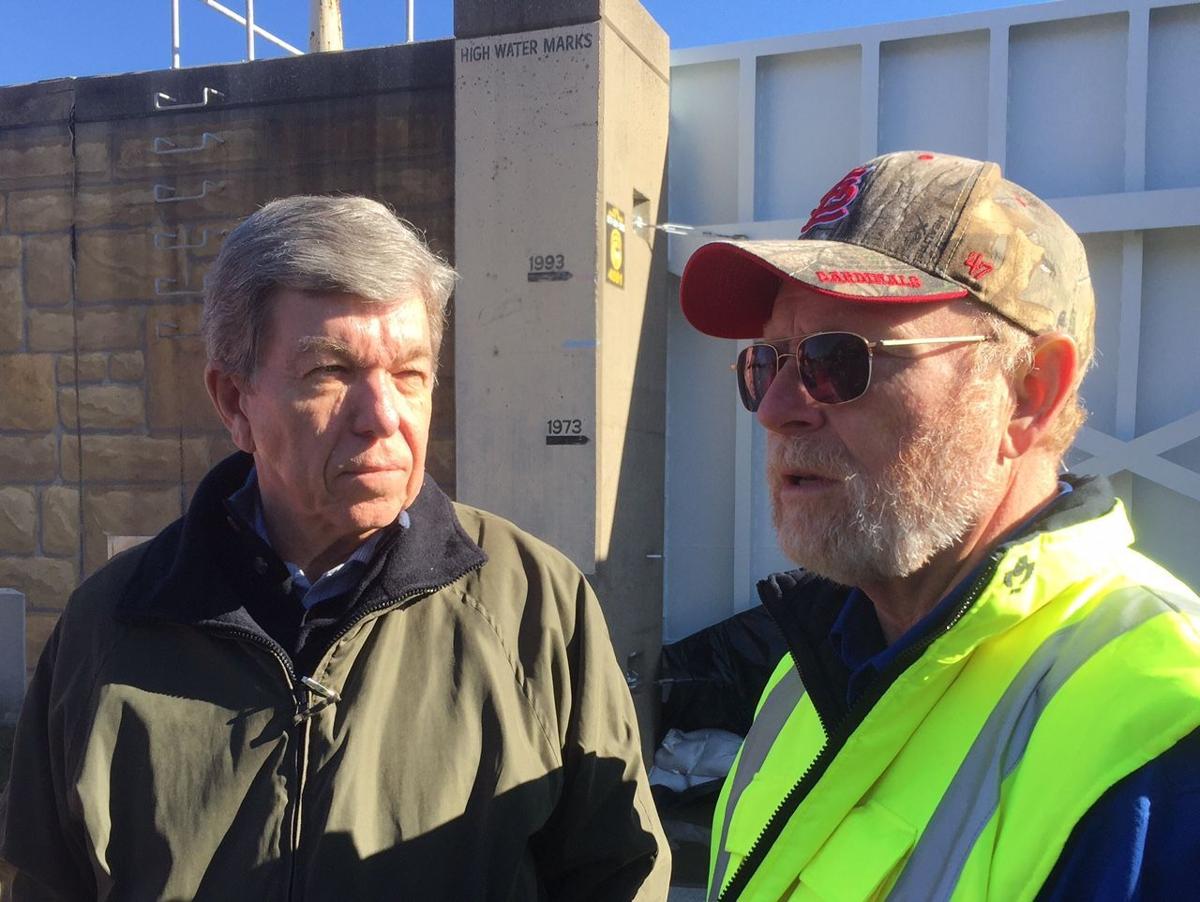 St. Mary, a town of about 360 residents built around the Immaculate Conception Catholic Church, woke up to its bank, bar, and more than a dozen homes under water after a small levee breach.

“This used to be a big town at one point,” said Irvin Brooks, who was in St. Mary on Friday surveying damage to his daughter’s home. “The floods have helped drive people away. Small towns need some attention too.”

St. Mary has lost about half of its population since the early part of the 20th century. The older, lower part of town was hit by the flooding.

The town, founded by French settlers, hummed to the unsettling beat of power generators and barking dogs on Friday.

Amy Richardson, Brooks’ daughter, said she had been away when the water came.

“We knew it was coming,” Richardson said, saying she packed up her belongings and moved early in the week.

Richardson had lived in a house on Third Street with her husband and four children.

The Missouri Highway Patrol was in town assisting with relief efforts on Friday, along with the U.S. Army Corps of Engineers.

“We are in damage assessment mode,” Woods said. “Unless something stupid happens up north.”

Woods said he didn’t expect any more damage unless a levee up river would fail.

The water lapped at St. Mary’s eastern front and stopped around Third Street. Several businesses, including First State Community Bank, were under water as residents attempted to reinforce the rest of the town with sandbags.

Sandbagging efforts were underway early Friday morning before the water flooded into town.

“We fought it hard all night long,” said Pam Myers, a St. Mary resident who helped her neighbors sandbag.

“Mountain Dew is about all that’s keeping me up,” she said.

Downriver, the Mississippi slowly crept up the flood wall in Cape Girardeau on Friday as officials expected to notch a record high water mark, besting the Great Flood of 1993.

Sen. Roy Blunt, R-Mo., appeared at the downtown flood gate on Friday and highlighted Cape Girardeau as a model of flood fighting vigilance, while noting significant improvements will need to be made to the area’s water system, particularly in St. Louis.

“This is a really unique, long-term effort by Cape,” Blunt said.

The city, with help from the federal government, has bought out homes in the flood plain and strengthened its levee system over the years.

The high water mark, along with “1973,” was painted on the wall behind Blunt, who was flanked by federal and local officials.

The river slowly rolled by on Friday as the event appeared to have minimal impact on the city. Many downtown businesses were closed for New Year’s Day, but traffic moved unimpeded. The levee remained strong, officials said.

Onlookers appeared on the steps of the city’s courthouse that overlooks the river.

“I remember in the ’50s when the whole town was flooded,” Campbell said. “Now we have the wall.”

The city’s flood wall was constructed in the late 1950s and has helped keep the water out of Cape Girardeau.

Rediger said about 20 of the city’s homes had water and had been evacuated, along with about five to eight businesses.

Stan Polivick, the city’s assistant public works director, said workers would be out in force 24 hours a day monitoring the situation.

Polivick pointed to the 1993 mark on Friday and noted: “That’s why we built the wall a little higher.”

Even with the record crest, Polivick said, the levee system still has at least four additional feet before it would reach its limit.

Blunt used the opportunity to highlight the importance of the river to the state’s economy.

“The river is going to become more important than ever,” Blunt said, noting that world food demand is expected to significantly increase over the next decade. The Mississippi is a major thoroughfare for Midwest agriculture.

“You want to be sure the river can withstand these kind of challenges,” Blunt said.

Photos: Unexpected scenes from the flood

A look at forecast and record crest levels at gauges along St. Louis-area rivers.

An army officer walks through St. Mary, Mo. on Friday