FESTUS • A limestone castle with a four-story gun tower used during the Civil War sits among 2,300 wooded acres on the bluffs of the Mississippi River, visible to the outside world only from water or air and shrouded in mystery.

The castle goes by several names, including Selma Hall and Selma Farm. Most locals still call it Kennett’s castle for the wealthy family who built it more than 160 years ago.

Two future governors dueled on a sand bar across the river from the castle grounds, and a man who would become king of England was among its visitors.

A string of influential families and companies have owned the property, once known for hosting lavish parties. But since Union Pacific acquired Selma Farm as part of its merger with Missouri Pacific in 1986, few people outside the company have been allowed on its grounds, say those who’ve tried to get in without success.

“There’s an air of mystery around it,” said Lisa Gendron, treasurer of the Jefferson County Historical Society who is writing a book about the castle and the families who’ve lived there. Even the county’s assessor’s office has been kept out, and uses photos taken from an airplane to get an idea of what’s on the property for tax purposes.

That mystery has deepened in recent weeks as people wonder what will happen to the castle — Union Pacific said last month that it would close Selma Farm as part of companywide measures to cut costs.

The railroad has used the castle and its grounds, which are three miles south of Festus, as a business, conference and hospitality property for 32 years, said Hannah Bolte, a Union Pacific spokeswoman, by email. She said that the decision to close it was part of the company’s plan to reduce its general and administrative support structure, and that the castle was not on the market.

“At this point, it’s premature to speculate (about) future plans for Selma Farm,” she said.

The 18-room castle is said to be a replica of a castle on Lake Como in Italy, according to a history published years ago by Union Pacific in a brochure.

Selma Farm was built for Ferdinand Kennett and his wife, Julia. The Kennetts were a rich and powerful family — Ferdinand’s brother was the mayor of St. Louis when the Eads Bridge was dedicated in 1874.

The Kennetts hired George Barnett, best known for designing Henry Shaw’s house that’s now a part of the Missouri Botanical Garden, to design the castle, which is almost 12,000 square feet. It was completed in 1854 at a reported cost of $125,000, according to Union Pacific.

The family brought in a master stone cutter from Philadelphia to supervise the stone quarrying, as well as other workers including cabinet makers, plasterers and sheet metal workers from the east. But slaves did much of the labor.

Ornamental iron throughout the castle and a parlor mantle came from England, and the Kennetts used part of the second floor as a Catholic chapel where the village priest celebrated Mass once a month.

Thomas Reynolds, a slaveholder who was the U.S. attorney for eastern Missouri, and Benjamin Gratz Brown, editor of the Missouri Democrat newspaper, dueled in 1856 over slavery in what was the last reported duel in the state. Both survived, but Brown suffered a shattered kneecap. He was elected Missouri governor in 1870. (Reynolds became lieutenant governor in 1861, but he and Gov. Claiborne Jackson were deposed when Union soldiers occupied Jefferson City. Reynolds became the Confederate governor-in-exile when Jackson died; he didn’t return to St. Louis until 1869.) 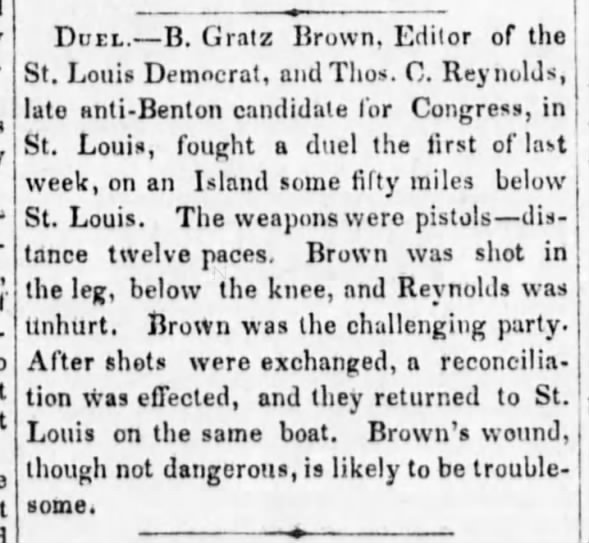 The year after the duel, the Kennetts entertained the future King Edward VII of England.

Ferdinand Kennett Jr., who inherited the property, was “reported to be much chagrined when Union troops and officers took over the residence during the Civil War,” according to Union Pacific. The castle’s shot tower was used throughout the war, during which the family moved to St. Louis.

A fire gutted the castle in 1939, and the Schock family rebuilt it. When the Mississippi River Fuel Corp., which became the parent company of the Missouri Pacific Railroad, bought the land in 1953, its president, William Marbury, continued restoration efforts and added a golf course and two fishing lakes.

Only glimpses of the modern-day property appear on social media, including a group photo at the golf course and a man doing target shooting.

Photos of the property on file at the Jefferson County Assessor’s Office show a swimming pool and grapevines.

“We would love to get in there and update our photos,” said Assessor Bob Boyer, saying it had been at least 10 years since the railroad allowed anyone from his office on the property.

Cary Blum, the office’s real estate division supervisor, said Union Pacific had allowed assessor personnel on the Selma Farm grounds only a few times in his 25 years with the office. Letters and phone calls frequently go unreturned, he said — most recently, efforts to get past the gates in 2015 and 2017 failed.

The assessor’s office obtains aerial photos of the county every two years, which it uses to assess Selma Farm. The most recent of those photos were taken in February.

This year’s tax bill for the total property is almost $61,000, records show, and the taxing parcel that includes the castle is appraised at $2.4 million.

The county’s historical society hosted a tour of the property in 1984, and the 1,000 available tickets were snapped up — three times as many easily could have sold, Gendron said. Before that, the castle had been closed to the public since the Mississippi River Fuel Corp. bought it more than three decades earlier.

“People ask questions,” Gendron said. “But they’re so secretive about it out there that no one answers the questions.”

Photos: Selma Hall through the years

View of the dining room

A view out one of the windows

View of the garden from the terrace 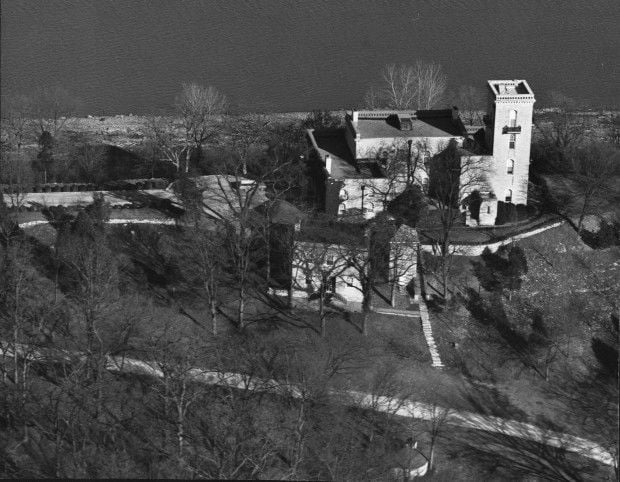 An aerial view of Selma Hall in 1964 showing the Mississippi River beneath the Jefferson County bluff. Thomas C. Reynolds and Gratz Brown rowed from the riverbank to a sand bar for their duel in 1856. The home is southeast of Festus and Crystal City. In 1856, the nearest town was Herculaneum. The Union Pacific Railroad now owns it and uses it for executive retreats. It is not open to the public. Photo by Renyold Ferguson of the Post-Dispatch