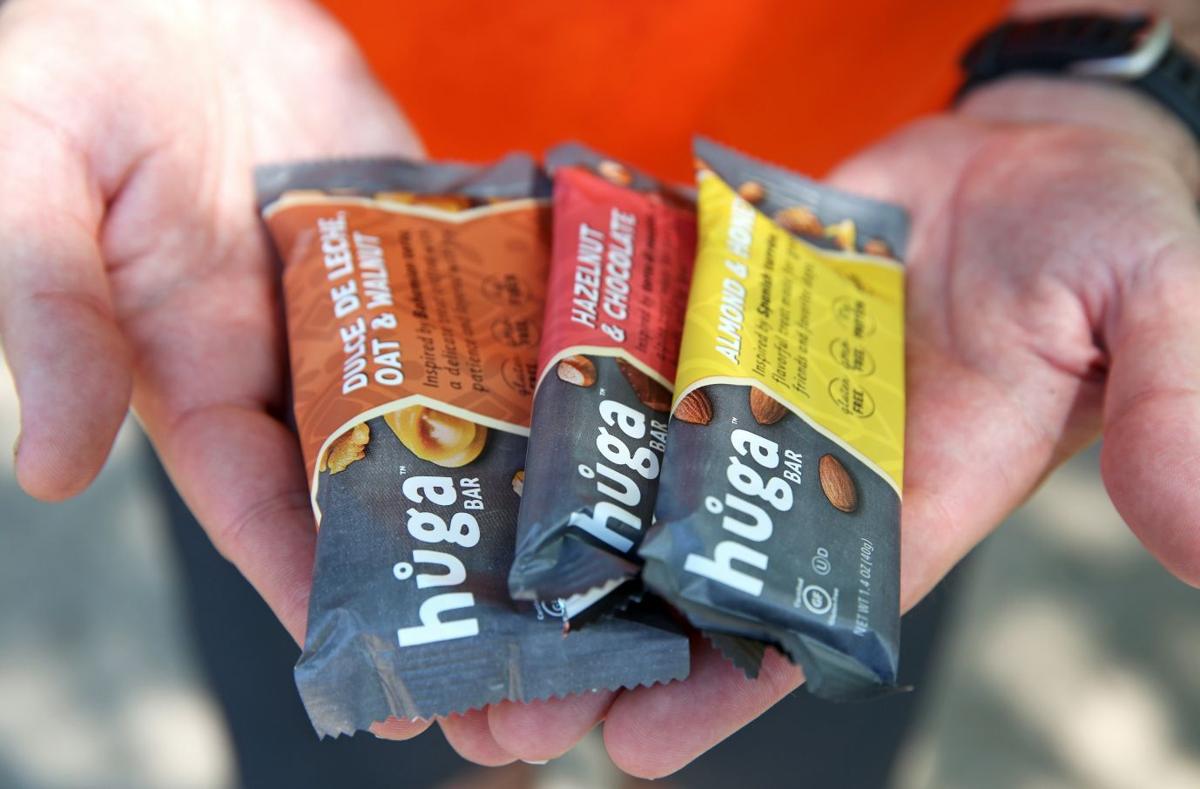 With the help of a partner, Luis Rivero recently launched his nutrition bar company, Huga Bar, which aims to bring a different variety of flavors to the bar market. Rivero said some of the flavor options were inspired by foods he grew up eating in Venezuela. Photo by Roberto Rodriguez 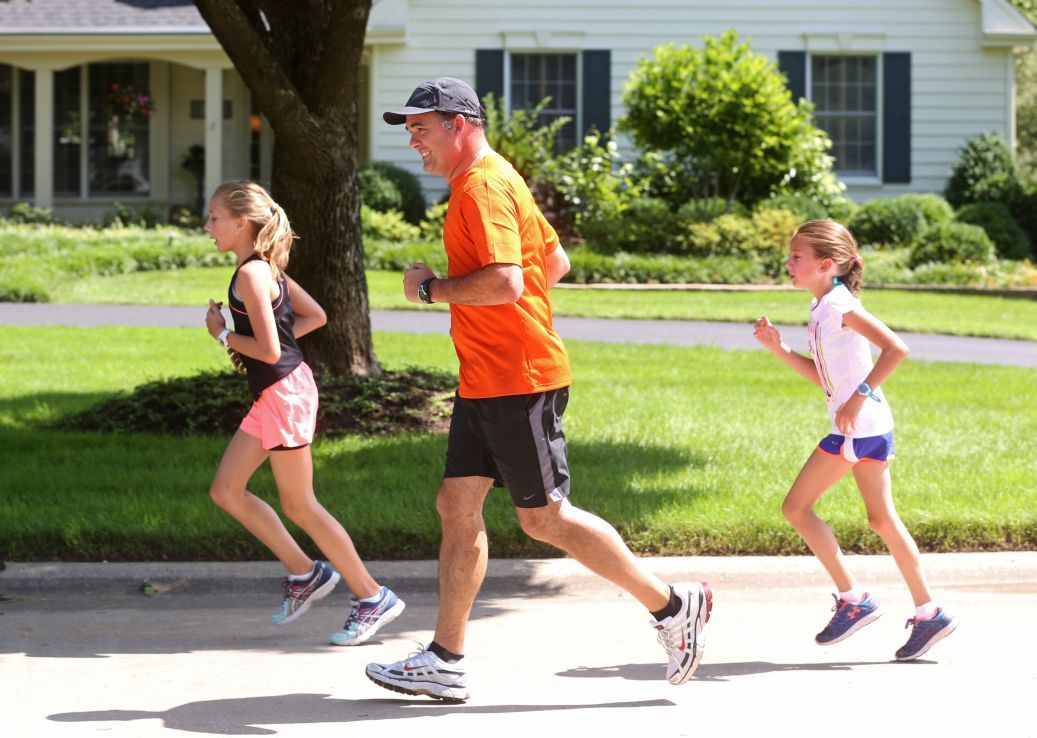 Luis Rivero runs with his daughters, Clarisa River (left), 13, and Carolina Rivero, 9, all of Chesterfield, as part of their training for an upcoming 5K race, Saturday, June 20, 2015. With the help of a partner, Luis recently launched his nutrition bar company, Huga Bar, which aims to bring a different variety of flavors to the bar market. Photo by Roberto Rodriguez 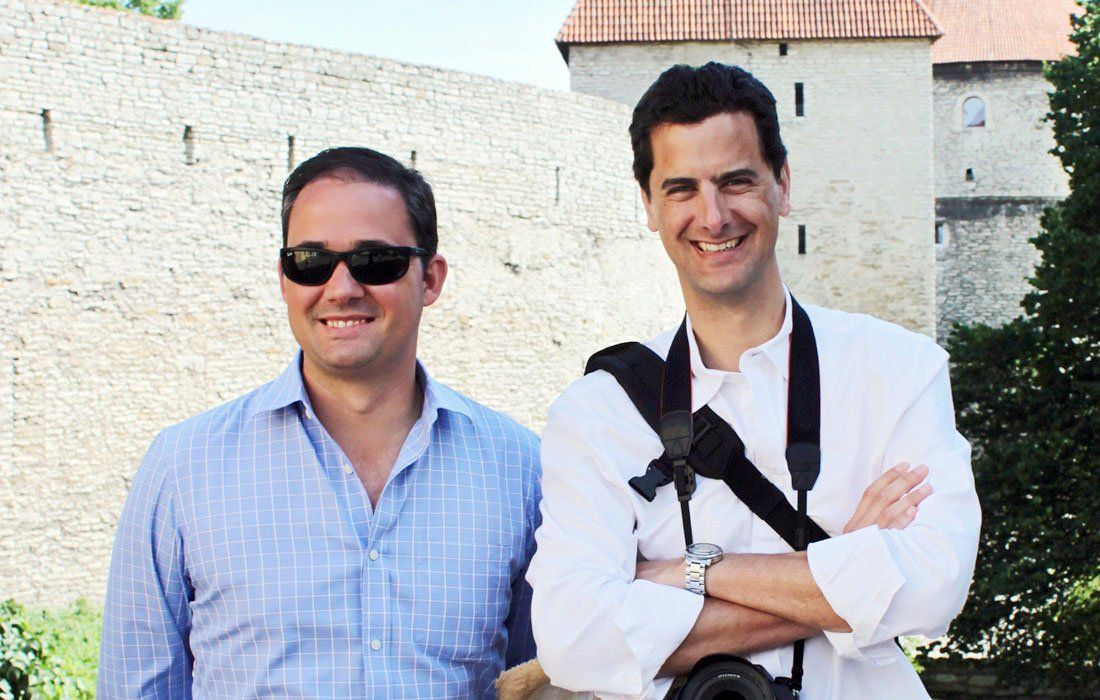 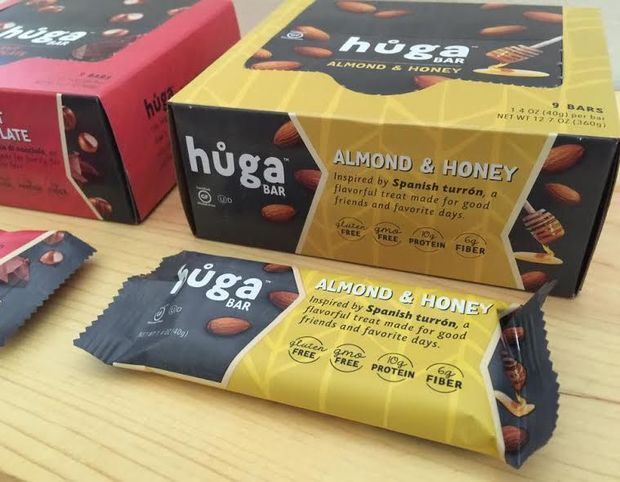 The Almond & Honey bar is inspired by Spanish turrón, an almond brittle traditionally made with almonds, honey, eggs and sugar.

Energy bars were Luis Rivero’s go-to meals when he came to the U.S. in 2003 for graduate school. With no time to cook, he quickly got caught up in the eat-on-the-run culture that was not as familiar in Venezuela.

The bars, he noticed, were not particularly tasty, especially those high in protein. And he began to grow tired of the flavors.

He continued eating the bars when he came to St. Louis two years later to work for DuPont. He and childhood friend Luis Mendoza, who had also moved to the U.S., often talked about foods they enjoyed back home, and how they missed the large family gatherings every weekend. Long, lazy afternoons to set aside the hectic life of Caracas.

Both men were building successful careers in the U.S., Mendoza an attorney in New York and Rivero in marketing for DuPont, where he learned the soy protein business and how it was used in foods. In their frequent conversations, they would talk about going into business together. But what? And when?

They kept going back to food and the family gatherings they missed. The men were now related by marriage — Rivero wed Mendoza’s sister. How about taking energy bars and rebranding them? No more would they be a grab-and-go food, but one that represents a moment to slow down life.

What happened next is the kind of immigrant success story that civic leaders are itching to nurture in the St. Louis region.

In their entrepreneurial zeal, Rivero and Mendoza created energy bars named Huga to reflect foods they and their wives enjoyed in Venezuela, based on family recipes and vacations to Europe.

For example, one of the three flavors, hazelnut and chocolate, would be inspired by torta di nocciole, a three-layer cake made by the grandmother of Mendoza’s wife, Luisa.

Two months ago, sales began. The Huga bar name was taken from the Danish word “hygge,” which Rivero says roughly translates into English as “cozy moments.”

“This is what we cherish in life … and what we’ve attempted to capture in our bars,” the men say on their website. Rivero said the bars represent “unhurried time.”

The company is based in Chesterfield, where Rivero lives with his wife, Maria, and their five children. He left his job at DuPont in August, after more than nine years with the company, and serves as CEO of Huga. Mendoza continues to run his small law firm in New York, working to build a market for Huga in that part of the country. The bars are produced at a facility in Oregon that provides similar work for other nutrition bar companies.

Rivero, 41, said there was talk of basing the company in New York or Miami, where his parents live. But after talking with his wife, they decided to stay in St. Louis.

Earlier this month, Rivero stood behind a table outside a Washington University auditorium alongside other vendors. He told the story of his nutrition bars and offered free samples. Inside the crowded auditorium, regional leaders touted the importance of recruiting and retaining immigrants who often come here for school or work but then move to cities where they feel more welcome or see more job opportunities.

St. Louis Mayor Francis Slay, with St. Louis County Executive Steve Stenger by his side, said “immigration is an economic imperative” if the region wants to be viewed as “globally attractive and competitive.”

The program was organized by the St. Louis Economic Development Partnership. It started the St. Louis Mosaic Project in 2013 to grow the region’s immigrant population and set an ambitious goal: To make St. Louis the fastest-growing region for immigration by 2020.

Census figures taking into account population estimates over a five-year period ending in 2013 rank St. Louis 11th among the top 20 metropolitan areas in immigrant growth. That compares to sixth the year before when similar population estimates were used for comparison.

Betsy Cohen, executive director of the Mosaic Project, said the census numbers reflect an ongoing challenge for St. Louis and show the need for the increased efforts that include her organization.

“Our aim is No. 1, but change takes time,” she said. While the region is ranked as the 19th-largest metropolitan area, it comes in at 43rd in the number of foreign born residents.

The efforts by the Mosaic Project include promoting entrepreneurship. Research shows that immigrants are more likely to start a business than native-born residents, so the key is to make it easier to do so, Cohen said.

Through the Mosaic Project’s ambassador program, which has grown to more than 500 people, those signed up vow to use their connections to make success easier.

In Rivero’s case, Ellen Gale, executive director of the Clayton Chamber of Commerce, contacted Trip Straub, of Straub’s Markets, to encourage a meeting with Rivero. As a result, the two men are expected to meet this weekend at the Summer Fancy Food Show in New York, billed as the largest specialty food trade event in North America. Rivero will be there with his bars in the new brands pavilion.

Huga bars are currently for sale online and at a few retail spots including the Alpine Shop, a camping and hiking gear store with four locations.

“We always like to support local since we are local,” said Angela Roam, the company’s camping buyer. “And they are gluten-free and GMO-free, and we look for that kind of thing.”

The bars, which sell for $2.75 each, are expected to appear in select Schnucks stores within the next month or so. Schnuck Markets spokesman Paul Simon said demand for nutrition and energy bars continues to increase.

The continued growth of the industry is no surprise to Connie Diekman, director of university nutrition at Washington University.

“They are a function of our crazy society where people are not taking time to eat meals and looking for ways to grab on the run,” Diekman said. And, she said, there often is a perception that there is something special about nutrition bars that can’t be achieved through foods.

“They are not magic,” she said.

Maybe not. But Huga’s goal is to “make the world more flavorful and nutritious,” its founders say.

One bar at a time.

St. Louis continues to drop in population, but the loss is slowing

The metro area, meanwhile, is growing more slowly than those nationwide.

'Hello' offered in 17 languages on Metro buses and trains

Effort part of larger plan to retain and attract immigrants

With the help of a partner, Luis Rivero recently launched his nutrition bar company, Huga Bar, which aims to bring a different variety of flavors to the bar market. Rivero said some of the flavor options were inspired by foods he grew up eating in Venezuela. Photo by Roberto Rodriguez

Luis Rivero runs with his daughters, Clarisa River (left), 13, and Carolina Rivero, 9, all of Chesterfield, as part of their training for an upcoming 5K race, Saturday, June 20, 2015. With the help of a partner, Luis recently launched his nutrition bar company, Huga Bar, which aims to bring a different variety of flavors to the bar market. Photo by Roberto Rodriguez

The Almond & Honey bar is inspired by Spanish turrón, an almond brittle traditionally made with almonds, honey, eggs and sugar.