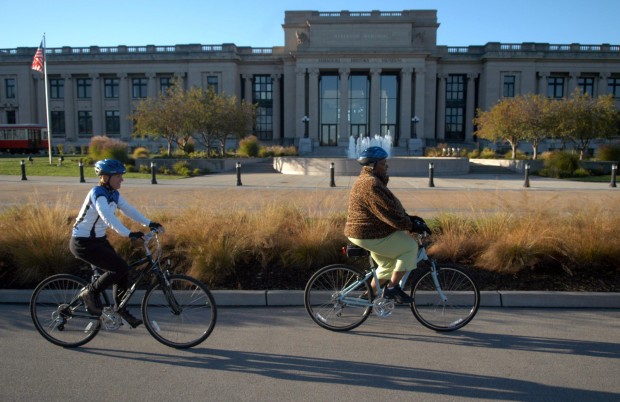 Bicyclists ride by the Missouri History Museum in Forest Park in this 2006 file photo. 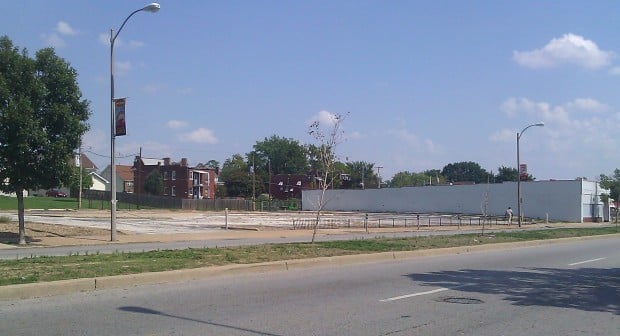 The Missouri History Museum spent $875,000 in 2006 to buy a closed barbeque restaurant at 5863 Delmar Blvd. They have since torn down the building and are now waiting for the right time to sell the property. Photo by Stephen Deere, sdeere@post-dispatch.com 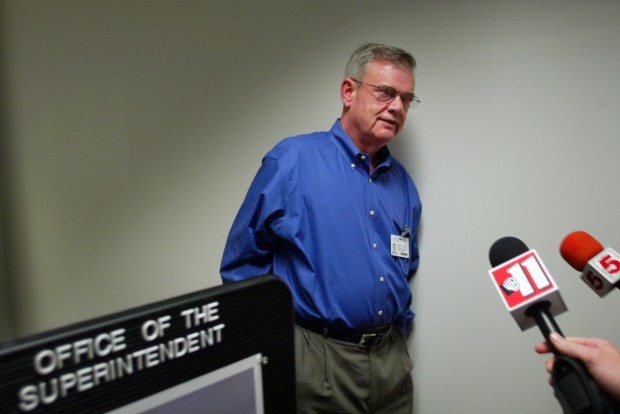 ST. LOUIS • Robert Archibald, president of the Missouri History Museum, says he had a vision six years ago of creating a community center along Delmar Boulevard, bridging racial divides and uniting residents through history.

So, he says, he pushed for the purchase of a one-acre property on Delmar. The parcel was owned by the city's former mayor, Freeman Bosley Jr., and it was the site of a struggling barbecue restaurant that Bosley and a partner had opened.

They had taken out hundreds of thousands of dollars in loans and owed at least three years of back property taxes.

It did so without a common practice in real estate deals — getting an appraisal.

On top of the purchase price, the museum paid nearly $101,000 for legal fees, environmental assessments and other costs. The museum paid off the $16,000 in back property taxes that Bosley and his partner owed, according to city records.

The community center dream has long been abandoned, but it still cost the museum nearly $1 million.

Today, the restaurant has been razed, and the city values the property at $232,300.

All the museum has to show for its investment is an abandoned patch of asphalt between Goodfellow Boulevard and Hamilton Avenue.

Bosley said that he never listed his property for sale and that the purchase came about through conversations with Archibald.

Still, both men deny that personal or political connections influenced the purchase.

"I'm sure people will say that," Bosley acknowledged, but he added that "forward-thinking" people would have said it was a good investment.

Archibald said he now realized that "an appraisal might have been prudent, given hindsight."

The purchase was highlighted in a recent audit of History Museum finances commissioned by the St. Louis Zoo-Museum District.

"You just don't not get an appraisal," said Gloria Wessels, who sits on the St. Louis Zoo-Museum District board.

Charles Valier, another district board member, also questioned the lack of an appraisal, saying the purchase involved "a fairly politically significant individual. A public institution has to take precautions in those kinds of situations."

History Museum officials say they plan to eventually sell the land, perhaps when the real estate market improves. One member of the board of trustees, real estate broker Elizabeth Robb, said she was confident the museum wouldn't lose money on the deal.

Real estate records show Bosley and his business partner, James Armstrong, bought a 1.65-acre parcel along Delmar in 1999 for $150,000. It was previously home to a McDonald's restaurant.

The two opened Big Jake's Bar-B-Que on the site and, in subsequent years, took out at least three loans. The first was for $475,000 in 2002 from the now-closed Gateway National Bank of St. Louis, according to city records. That same year, they split off a portion of the property on which to build and sell three homes. The restaurant sat on the remaining acre.

The partners later got two additional loans, for $185,000 in 2003 and $70,000 in 2004, from the St. Louis Local Development Co., a branch of the city's development arm. Both loans were for the restaurant, according to the loan documents.

Bosley and Armstrong weren't required to pay back those loans so long as they met various requirements, including creating at least six jobs and staying in business for a certain number of years. In the end, they paid back only $42,500.

Bosley said that the restaurant never really took off but that "we were able to keep the doors open." The restaurant lost $18,500 in its first six months, according to city records. The city's Collector of Revenue later sued the partners over at least three years of unpaid property taxes.

When he heard that the History Museum was looking for a location for a community center, Bosley said, he told Archibald he was interested in selling the property.

In 2003, Bosley and Archibald were both on the executive committee for Citizens for Home Rule, a group that sought to cut several at-large elected positions, put more power in the mayor's office and revamp city operations.

The museum's board voted in October 2005 to approve the Delmar land deal, and the sale closed in November 2006.

Armstrong, Bosley's partner, said he was "the barbecue man" and Bosley was "the business partner." He said that he could not recall many details of the land sale but that he was satisfied with the $875,000 price.

Archibald said that he couldn't remember who approached whom about the Delmar land deal, but that the museum had already been searching for a location in the area.

Archibald said he envisioned the community center as a place where families and neighborhood associations could hold events and use video to record their histories. He chose Delmar because decades earlier, it was seen as a boundary between black and white residents. The boulevard was also seeing a development boom.

Archibald said he and the museum's board of trustees looked at several properties along Delmar before settling on Bosley's.

Ray Stranghoener, chairman of the board, said last week that the board didn't seek an appraisal because some trustees were real estate professionals who could determine the value.

Two years earlier, in 2004, Delmar Loop developer Joe Edwards had purchased the building next door, the former Delmar High School, which still stands on the site, for $333,000. That site is 0.72 acres.

Plans for the museum's community center never got far. Archibald said the museum had hired an architect for the project, but then the recession hit.

"The opportunity for raising funds for construction faded away," he said.

The museum has since decided to use current space and new technology to accomplish much of what it wanted to do with the proposed center, Archibald said.

Stranghoener, the board chairman, said the museum wouldn't attempt to sell the property until the real estate market improved. He hopes an old-fashioned trolley line that Edwards is spearheading along 2.2 miles on Delmar — from the University City Library to the History Museum in Forest Park — will boost property values.

Construction on the trolley will begin in a few weeks and is scheduled for completion in mid-2014. Archibald is head of the nonprofit Loop Trolley Co., which was established in 2001 to raise money for the trolley.

The History Museum's funding comes from private sources and several million dollars in tax money it receives annually through the Zoo-Museum District. The district's leaders are in the process of commissioning audits on each of the cultural institutions. A draft of the History Museum audit was given to the district board last week.

McClellan's solution: Let the museum president and the board member who defended the deal buy the property back.

It's hard to imagine that voters today would agree to do what St. Louis city and county voters did in 1971: Levy property taxes on themselves …

Sure, the land deal between the History Museum and the former mayor may look suspect, but McClellan has a solution for that.

Editorial: It's a History Museum, not a secret society

For more than two decades, Robert Archibald has had nearly unfettered control over the Missouri History Museum, which this year means he has n…

While he was a member of the museum's board of trustees, former Mayor Freeman Bosley Jr. discussed buying a one-acre property he owned.

Twilight Tuesdays is back for another go-round.

Bicyclists ride by the Missouri History Museum in Forest Park in this 2006 file photo.

The Missouri History Museum spent $875,000 in 2006 to buy a closed barbeque restaurant at 5863 Delmar Blvd. They have since torn down the building and are now waiting for the right time to sell the property. Photo by Stephen Deere, sdeere@post-dispatch.com