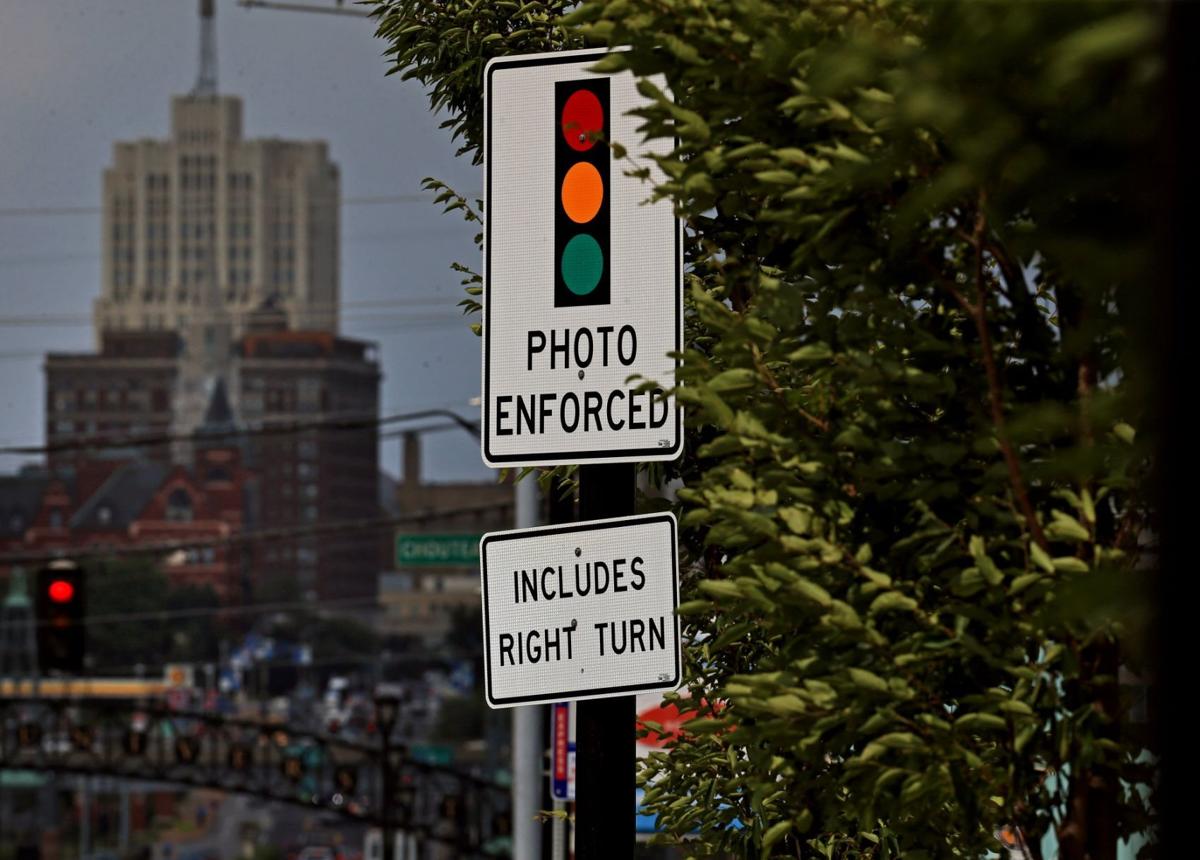 A sign warns of a red light camera at Chouteau Avenue and Grand Boulevard on Tuesday, Aug. 18, 2015. Photo by Christian Gooden, cgooden@post-dispatch.com 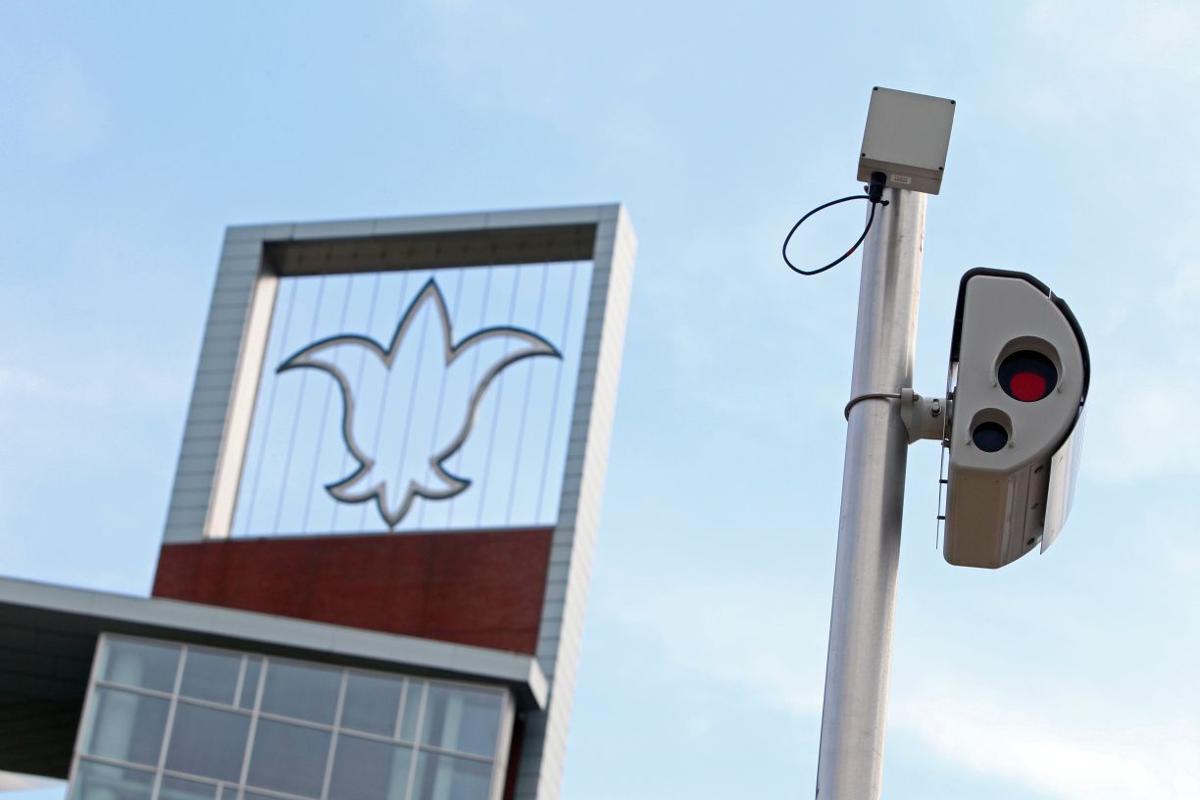 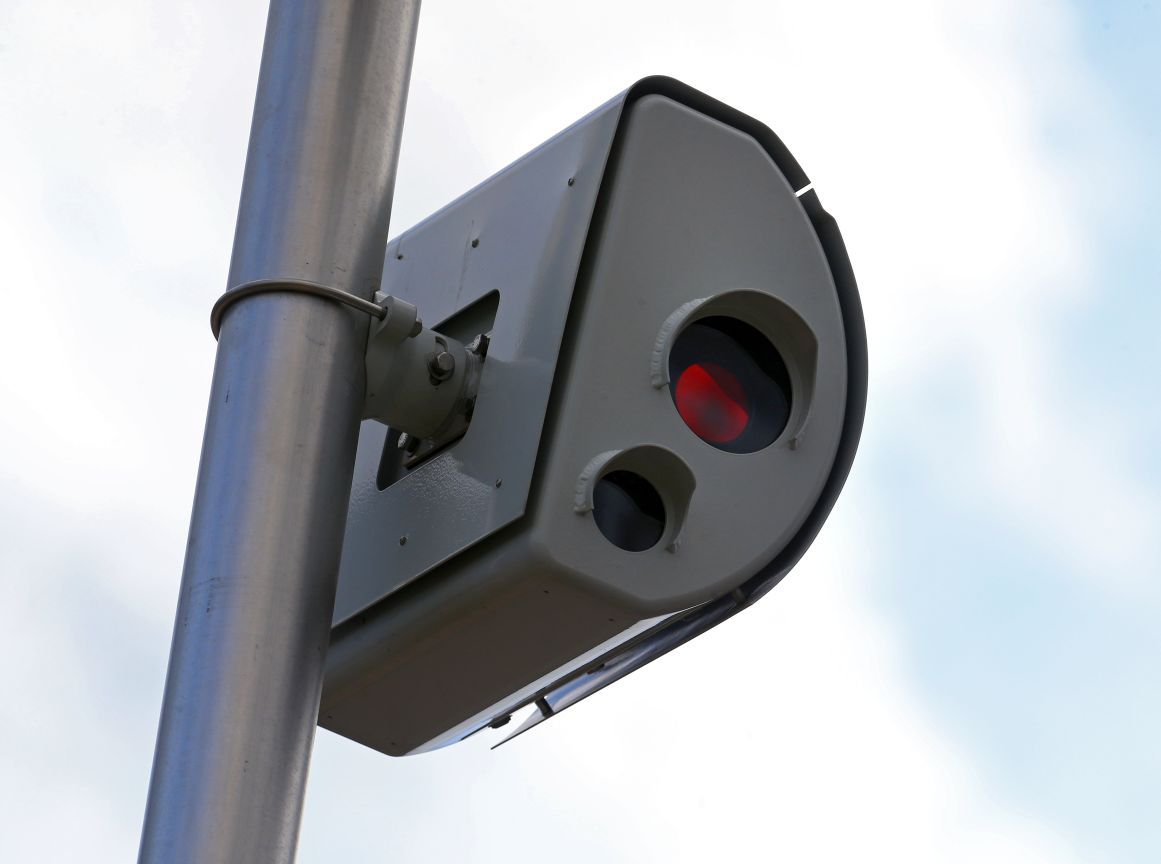 A red light camera is positioned at Chouteau Avenue and Grand Boulevard on Tuesday, Aug. 18, 2015. Photo by Christian Gooden, cgooden@post-dispatch.com 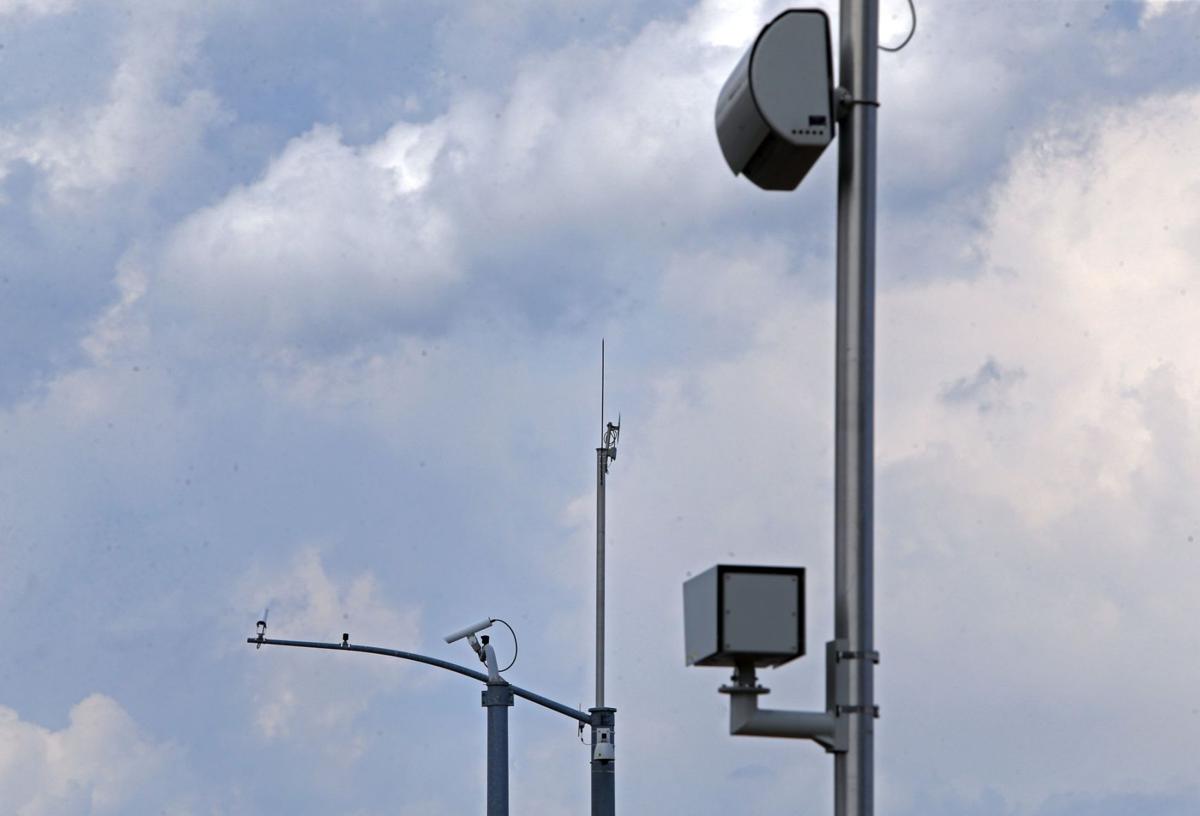 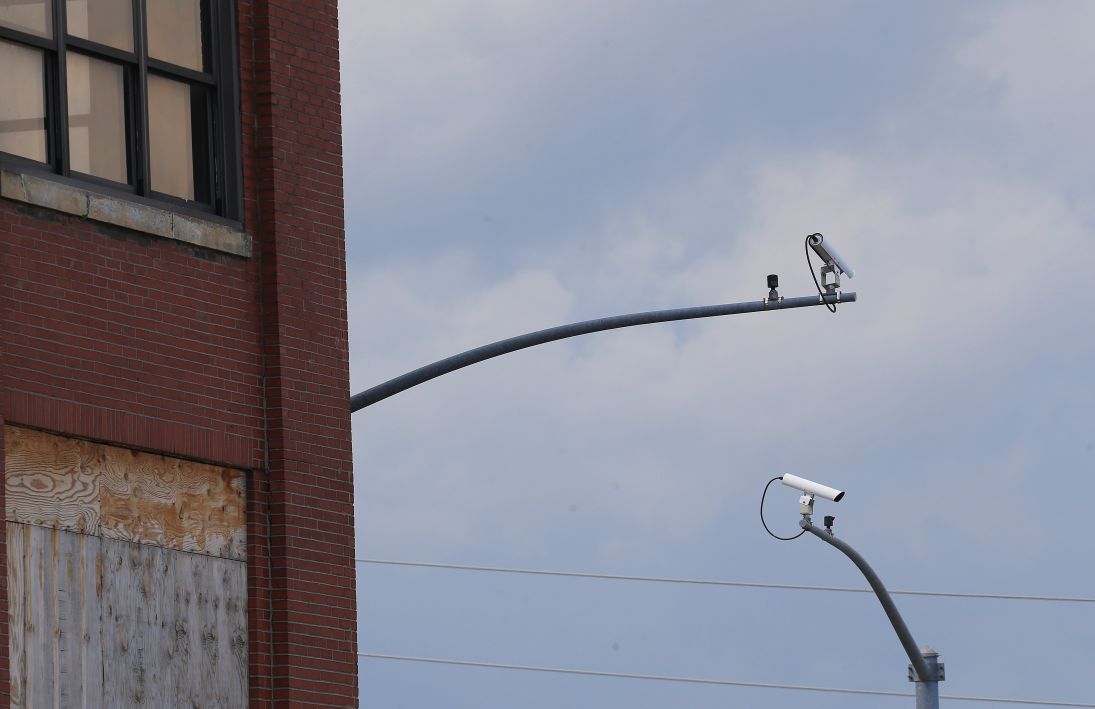 The Missouri Supreme Court struck down on Tuesday the ordinance governing red-light cameras in St. Louis, as well as language in similar ordinances in Moline Acres and St. Peters.

In response, St. Louis announced that it had stopped issuing red-light camera tickets and dismissed all pending cases. People who recently paid those $100 tickets can expect refunds, the city said.

Bevis Schock, the attorney who represented plaintiffs in all three cases, applauded the court rulings. “If we had lost these cases, cameras would have multiplied like rabbits in the spring and the poor and middle-class would be beset with these fines,” he said.

Although the Supreme Court found defects in all three ordinances, it did not rule specifically on the legality of the cameras themselves, leaving open the possibility that municipalities can enact red-light camera ordinances that will withstand future legal challenges.

“We look forward to working with communities throughout Missouri to restart their safety programs in full compliance with the direction provided in the multiple opinions issued today,” said Charley Territo, a spokesman for Tempe, Ariz.-based ATS, said in a written statement.

The history of challenges to traffic-enforcement cameras has been complicated.

In St. Louis, Circuit Judge Steven Ohmer invalidated last year the city’s red-light ordinance in a case brought by Sarah Tupper and Sandra Thurmond after their vehicles were photographed running red lights. Both said someone else had been driving at the time.

Ohmer placed his order on hold to allow proponents of the St. Louis ordinance to mount an appeal. The city continued to issue tickets but put fines it collected in an escrow account pending the outcome of the case.

“This Court further finds ordinance 66868 is unconstitutional because it creates a rebuttable presumption that improperly shifts the burden of persuasion onto the defendant to prove that he or she was not operating the motor vehicle at the time of the violation,” the court’s majority wrote in the opinion in support of the women who brought the St. Louis case.

Michael Garvin, the city’s attorney, argued in December before the Supreme Court that the city presumed the vehicle’s owner was driving it at the time of the photograph. The owner is driving about 70 percent to 80 percent of the time, he said, adding that the camera in St. Louis picks up only the vehicle’s tags.

Vehicle owners who receive a ticket can rebut the claim, but that places undue difficulty on the owner and takes away their due process rights, Schock argued in response.

People who paid red-light camera tickets in the past year and a half, since the city has been putting money in the escrow account, will get that money back, although the city hasn’t worked out how that will happen, Crane said.

Slay’s administration, which supports traffic cameras as a deterrent, also is moving forward with an ordinance that will comply with the court’s rulings.

“When we appealed this decision, we hoped to obtain a clear direction from the Supreme Court, and that’s what we received,” Deputy City Counselor Michael Garvin said a statement.

In that case, St. Charles County Circuit Judge Ted House ruled in 2013 that red-light cameras conflict with state law because convictions don’t result in penalty points on a driver’s license. House dismissed a ticket received by Bonnie A. Roeder but did not void the city’s camera ordinance.

Scott Williams, the attorney for St. Peters, had argued that the state’s charge code manual does not include red-light cameras, so the city is not required to report it to the state for points on a drivers license.

But the court left open the possibility of keeping the ordinance on the books, without the portion relating to points.

“The court found our ordinance valid with the exception of one sentence,” Williams said Tuesday.

Another case, out of Moline Acres, was a challenge to its speed cameras. It began when Charles W. Brennan, a local radio personality, was ticketed when his car was caught on camera going 11 mph over the speed limit on a stretch of Missouri Highway 367 in the city limits in 2012.

Brennan’s lawsuit challenged whether the municipal ordinance can turn moving violations into a civil matter that doesn’t result in points against a driver’s license.

Carl Lumley, attorney for Moline Acres, argued that the vehicle owner is charged with unsafe supervision of a vehicle, not a moving violation. Whether or not the owner was in the vehicle at the time of the violation, he or she permitted its use, Lumley said.

He added that owners could attempt to prove they had not given permission to operate the car.

The Missouri Supreme Court ruled that if the city is going to charge the owner rather than the driver, the city must prove the owner gave permission to the driver to speed. But it did not rule the ordinance invalid.

It also found that Moline Acres was wrong to give someone the option to pay a fee to avoid being prosecuted, which it offered to Brennan.

Moline Acres Mayor Michele DeShay has said that the speed cameras are no longer in place but that there was a possibility they could return, depending on how the court ruled. She could not be reached for comment on Tuesday afternoon.

A plan to put a measure on the August 2016 ballot to ban red-light cameras across the state did not pass in this year’s legislative session.

The Missouri Supreme Court on Tuesday struck down traffic-camera ordinances in three municipalities, including St. Louis.

St. Louis, in response, stopped issuing red-light tickets and dismissed pending cases. The city hasn't determined yet how to pay refunds to some people who already paid tickets.

St. Louis still plans to move forward with a red-light camera ordinance that will comply with the Supreme Court rulings.

But 35 people with pending tickets still must deal with them.

Those who paid the $100 fine will receive a check in the mail within 15 business days, the city says

The county charter ban approved by voters in 2014 was challenged by St. Peters, and other cities, calling it an intrusion on municipal powers.

Seeking a refund for a red-light camera ticket in St. Louis? Timing is everything

Lawsuit seeks earnings tax refunds for those who worked outside St. Louis during pandemic

In past years, St. Louis has allowed refunds to employees for days they traveled and worked outside the city limits. That changed during the pandemic.

A lawyer with two red-light tickets goes to court and encounters confusion.

How major bills fared in the 2015 Missouri legislative session

A sign warns of a red light camera at Chouteau Avenue and Grand Boulevard on Tuesday, Aug. 18, 2015. Photo by Christian Gooden, cgooden@post-dispatch.com

A red light camera is positioned at Chouteau Avenue and Grand Boulevard on Tuesday, Aug. 18, 2015. Photo by Christian Gooden, cgooden@post-dispatch.com