ST. LOUIS — City aldermen appear poised to approve a bill that would give control of firefighter pensions back to a board dominated by firefighter interests, reversing some hard-won changes to the pension system meant to rein in costs and approved over union objections and lawsuits in 2012.

The proposal, backed by the powerful firefighters union, comes as many aldermen face reelection and the mayoral campaign heats up.

The bill sponsor, Alderman Tom Oldenburg, says it will save administrative expenses by moving the new Firefighters’ Retirement Plan, established by the 2012 reforms and dominated by city appointees, back under the old Firemen’s Retirement System board. And he points to its veto-proof majority on the board: 21 co-sponsors have signed on, including two candidates for mayor: Aldermanic President Lewis Reed and Alderman Cara Spencer, D-20th Ward.

“This is purely a governance structure and doesn’t open up the city to any ability to change benefits,” Oldenburg, D-16th Ward, said in an interview. “They would have to come back to the Board of Aldermen for approval if they wanted any change or increase.”

But Budget Director Paul Payne is pushing back against the change, calling claims of cost savings “inaccurate” in a Friday letter sent to aldermen.

“If this were truly a cost savings initiative, then consideration would be given to consolidating the plans under the less expensive (Firefighters’ Retirement Plan),” Payne wrote.

The Firefighters’ Retirement Plan was established by the 2012 pension reforms with lower benefits for new hires, a move then-Mayor Francis Slay’s administration said was necessary to keep the city’s soaring fire pension liabilities in check. It has its own board, where Payne serves along with the city comptroller and two mayoral appointees, two active firefighters and one retired firefighter.

The Firemen’s Retirement System, the old pension system, still administers benefits for retired firefighters but is closed to new members. Its board gives more clout to firefighters: three current firefighters, one retired firefighter plus the fire chief. The comptroller has a representative and the mayor gets two appointees.

It is governed by state statute, so changes to it require a corresponding bill to pass in Jefferson City, which historically made reform more difficult for city leaders. Missouri Sen. Steven Roberts, D-St. Louis, has filed a bill allowing the latest change proposed by aldermen.

Demetris Alfred, president of Local 73 of the International Association of Fire Fighters (IAFF) and a member of the Fireman’s Retirement System board, said moving the new plan under the old board would be a “morale booster” and allow the board to better respond to firefighter concerns. For instance, he said there were some “scrivener’s errors” in the new plan, such as a death benefit that is only paid out when a firefighter dies at the scene rather than later at a hospital.

“We’re not interested in just working the benefits up,” Alfred said. “We’re in COVID, we understand the situation that’s going on. What we’re trying to do is streamline it to save money for the city.”

The Firemen’s Retirement System was known for handing out rich bonuses and benefits to its office workers. Its former administrator, Vicky Grass, retired in 2015 with a $579,210 cash payout and a $4,800 monthly pension. She was elected to the board of aldermen last year and is a co-sponsor of Oldenburg’s bill.

“Those board members aren’t there anymore,” Alfred said. “The board has changed.”

Oldenburg’s bill would give the Firemen’s Retirement System board control over procuring services and hiring staff to administer the plans. The new plan procures services under the city’s procurement rules and its staff are city employees subject to civil service salary rules.

“These were basic, good government reforms of the new system that would be forfeited,” Payne wrote.

One change was made to Oldenburg’s bill keeping a separate board governing disability eligibility, a nod to the system’s history of approving benefits for injured firefighters who went to work elsewhere. The firefighters union offered that “concession,” Oldenburg said, “in the spirit of negotiation.”

“We understand the city’s sensitivity around a board with a majority of firefighter members granting disability,” he told the Aldermanic Public Safety Committee last week.

Payne contends that one of the major changes would allow the Fireman’s Retirement System to hire its own accountants and actuaries, which put together the critical projections on how much in benefits a plan will pay out and how much it will make from market investments. That could ultimately influence benefit changes aldermen may be asked to make and how much city taxpayers ultimately pay into the system.

“All too often, what cities in general have experienced is that these assumptions have been overly optimistic, with the systems’ earnings being overestimated and cost of benefits underestimated, resulting in a level of unfunded liabilities that the city is required to pay,” Payne wrote.

The longtime city budget chief was scheduled to testify before the Public Safety Committee last week. But committee chair, Alderman Joe Vaccaro, D-23rd Ward, said the agenda was too packed to allow other testimony on the pension change.

“It was sort of odd,” Payne told the Post-Dispatch. “I was prepared to speak to it, and I had some charts and things.”

The 22-2 vote came despite concerns raised by Budget Director Paul Payne and Comptroller Darlene Green that measure would unwind reforms enacted in 2012.

Krewson said the change, sought by the influential firefighters union, isn’t ‘fiscally responsible.’ An effort to override the veto is expected.

Vicky Grass, the former director of the system, receives $579,210, plus pension and other benefits.

The Firemen's Retirement System sued the city on Wednesday, asking a judge to block fixes made to Mayor Francis Slay's firefighter pension ref…

Reed said his first priority would be public safety. 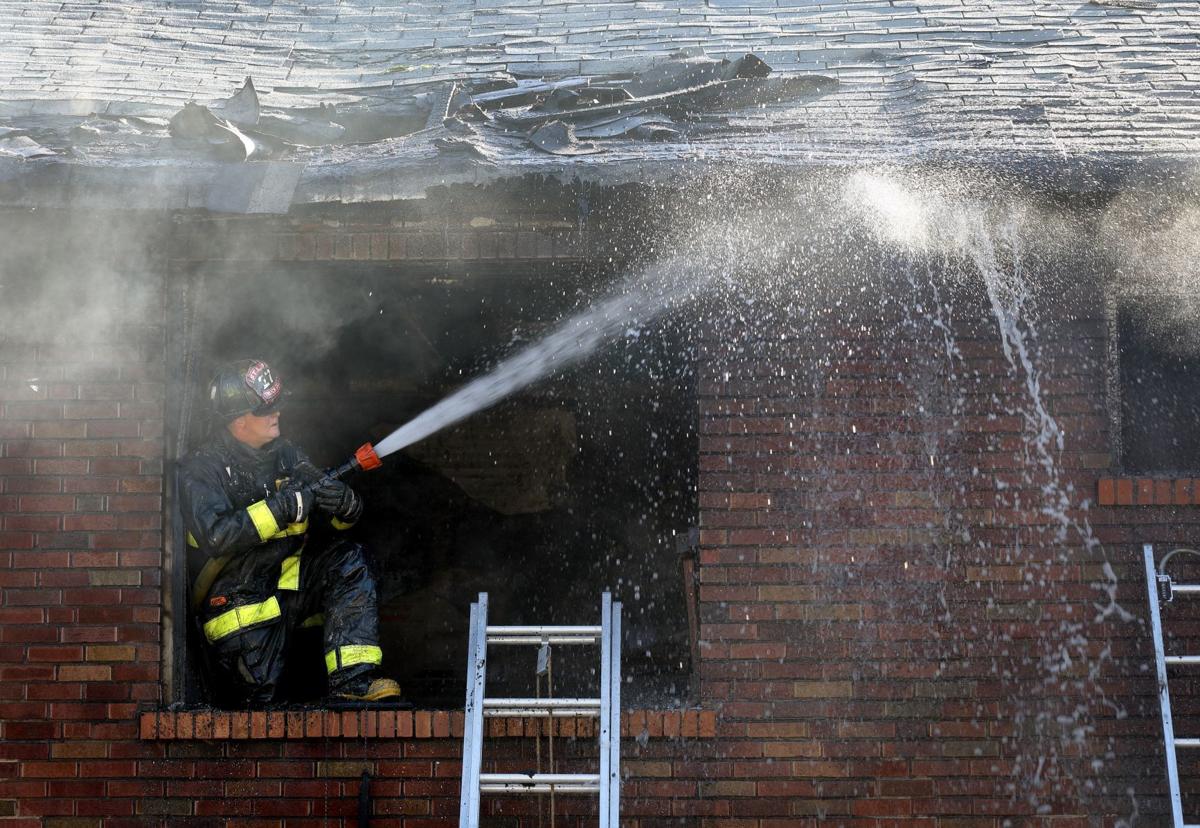 Firefighters put out a one alarm blaze in the 4900 block of Claxton Avenue in St. Louis June 4, 2018. Neighbors say the home was vacant but squatters sometimes took shelter in the building. The fire department searched the building twice and found no one inside the building. No injuries were reported. Photo by David Carson, dcarson@post-dispatch.com 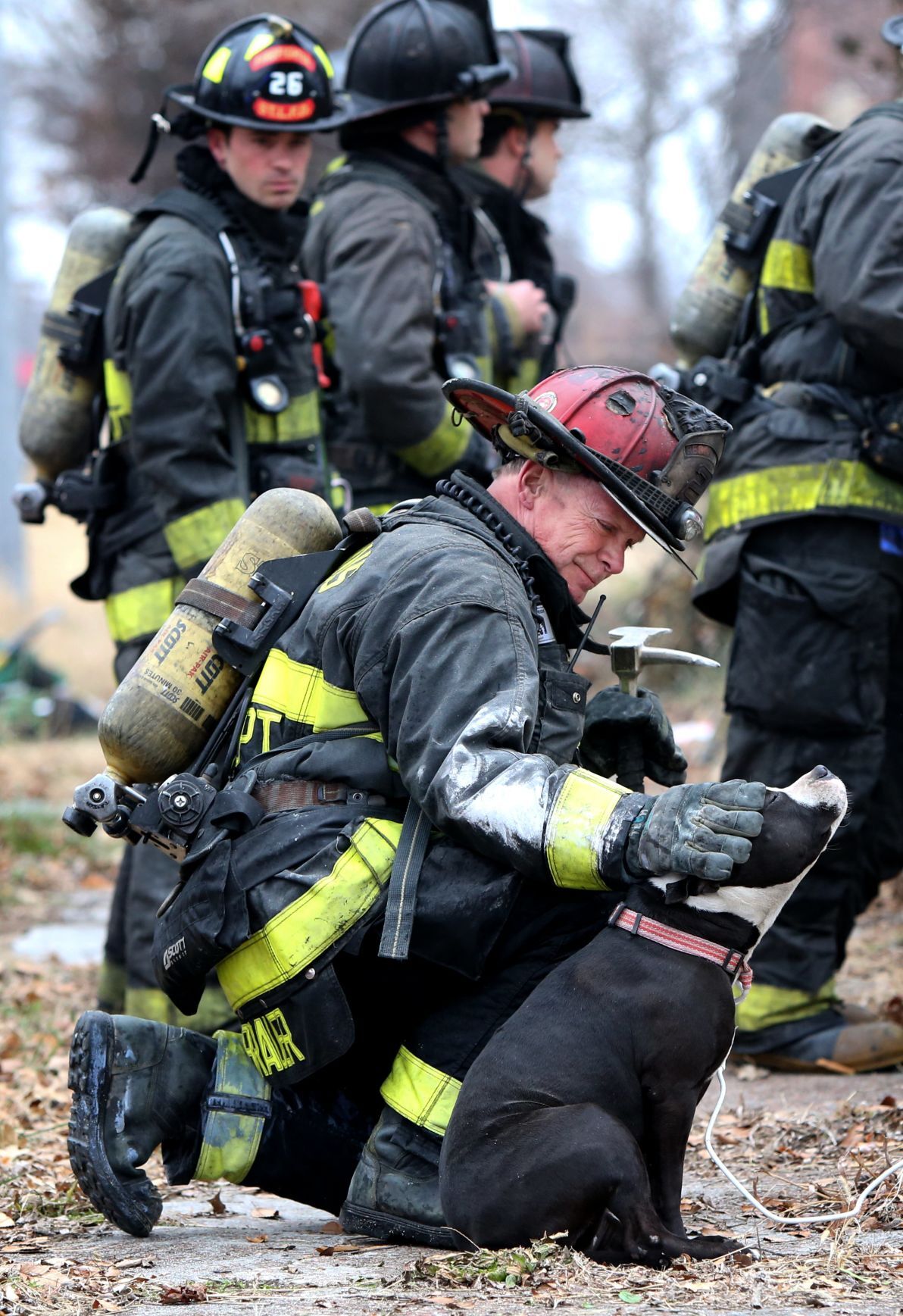 A firefighter leans down to pet a dog tied to a fence outside a vacant building on fire on the 4200 block of Evans Avenue in St. Louis on Friday, Jan. 8, 2021. Photo by Christine Tannous, ctannous@post-dispatch.com