ST. LOUIS — Peace Park, at the base of the iconic Grand Avenue water tower, has for years been a green refuge for residents of College Hill, a north side neighborhood that has struggled with poverty, vacancy and crime for decades.

It isn’t, however, an official city park. Pieced together in the 1980s by neighborhood activist Otis Woodard, it’s a collection of lots owned by a nonprofit and the St. Louis Land Reutilization Authority that has filled a gap in one of the only city neighborhoods without a public park.

Soon, the unofficial park will have a new owner, a community land trust that backers say will have the resources and staff to both maintain and develop Peace Park into a neighborhood destination with more than a few picnic benches and trees.

St. Louis is on the cusp of creating a new community land trust, seeded with a $1 million funding pledge from the Missouri Department of Conservation over four years and a $1 million match from private foundations and public sources. It is beginning a search to hire an executive director and will later add more positions, including a land maintenance director and a neighborhood outreach coordinator.

The effort has quietly been underway for several years as the Green City Coalition. Born out of vacant building demolitions to add public green space absorbing rain runoff for a Metropolitan St. Louis Sewer District program, the city and state Department of Conservation collaboration evolved to begin managing and improving other spaces. Often, that’s vacant lots owned by the LRA, the city’s land bank and owner of last resort for abandoned properties. But the group also has funding to acquire private land and has built neighborhood coalitions to help manage and plan for the spaces.

The city, MSD and the Missouri Department of Conservation expect to demolish 200 properties by the end of the year.

Already, the Green City Coalition is managing about 150 vacant properties, comprising about 20 acres, in four north side neighborhoods: College Hill, Baden, Wells-Goodfellow and Walnut Park. In addition to Peace Park, it has six other projects. In Walnut Park, it’s added a row of cleaned-up LRA properties to expand the boundaries of Carter Park. In Wells-Goodfellow, coalition partners have spent some $750,000 digging out foundations and demolished buildings to clean the soil of new green space created by vacant building teardowns. It also helped plant a small orchard near St. Louis and Belt avenues.

On Thursday, the board of the St. Louis Development Corp., which has housed the staff members of the Green City Coalition while plans and funding for the new land trust were built, signed off on an agreement accepting the state funding.

“This is a really bold, bold plan,” said SLDC board member Sean Spencer.

Soon, the 150 or so LRA properties that Green City Coalition has worked on will be deeded over to the new land trust, and, eventually, the coalition itself will be absorbed into the trust.

“This agreement finally gives us a vehicle to move forward,” Laura Ginn, the SLDC vacancy strategist who led the Green City Coalition and is spearheading the community land trust effort, said in an interview from Peace Park Thursday.

Ginn said as many as 300 or so LRA properties could be transferred to the land trust in future years, reducing the maintenance burden on the overstretched LRA responsible for thousands of abandoned properties. It will also try to acquire private property when it can. One privately owned house remains in Peace Park, for instance, and Ginn and her staff are working to track down the owner to buy it.

The new SLDC agreement includes a partnership with Build Missouri Health, an affiliate of the Missouri Foundation for Health, which will oversee financial administration of the land trust while it gets up and running. Missouri Foundation for Health Chief Financial Officer Jill Nowak said the organization offered its expertise administering and disbursing grant funding to the fledgling land trust, which aligns with its health mission.

“We know part of the social determinants of health is housing and the neighborhoods you live in and the ability to access beautiful outdoor spaces,” Nowak said.

“We started with a very green-space-heavy focus and acknowledge that we need to really do more and do better, and have grown to add other partners and really think of these places as nodes of strength, nodes of place-based development,” Ginn said.

Small-scale housing development could eventually be on the horizon. In College Hill, neighbors want help to facilitate some nearby commercial development after construction of new Peace Park amenities, such as a pavilion, begins later this year.

‘Rebuilding a city’: Demolition activity in St. Louis up one year after Krewson outlined vacancy plan

Demolition of abandoned, broken buildings is on the rise. The number of properties held by the city’s land bank is down. Contractors are, for the most part, following a new, safer demolition protocol.

St. Louis struggles to keep up with rising tide of broken, abandoned buildings

Some neighborhoods may be beyond saving; others need help now.

Painting of Corinthian column was part of 2-mile-long revitalization effort. 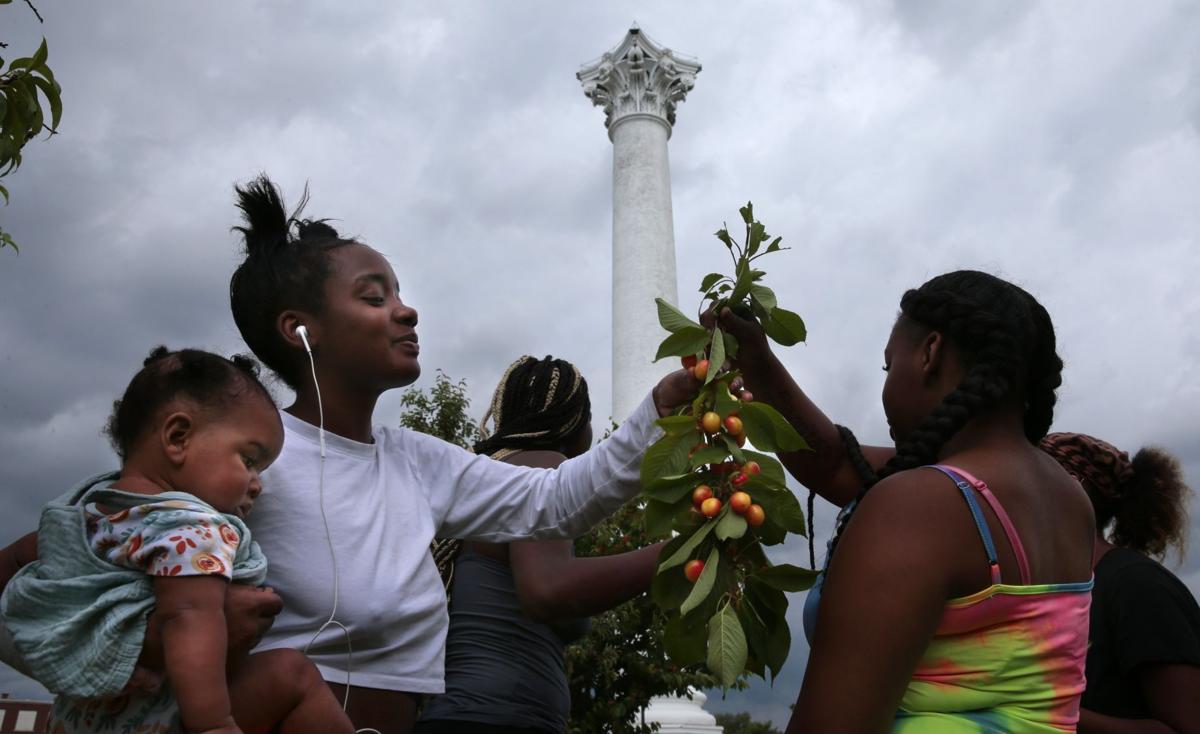 Casshae Triplett, left, and her six-month-old daughter Camella, try cherries picked from fruit trees at Peace Park, near the Grand Avenue Water Tower in College Hill on Thursday, May 27, 2021. Peace Park will be part of a new community land trust approved Thursday to maintain green spaces in four north St. Louis neighborhoods. The land, not an established city park, is dotted with fruit trees including cherry, peach, pear and apples for neighborhood residents to pick. Photo by Robert Cohen, rcohen@post-dispatch.com 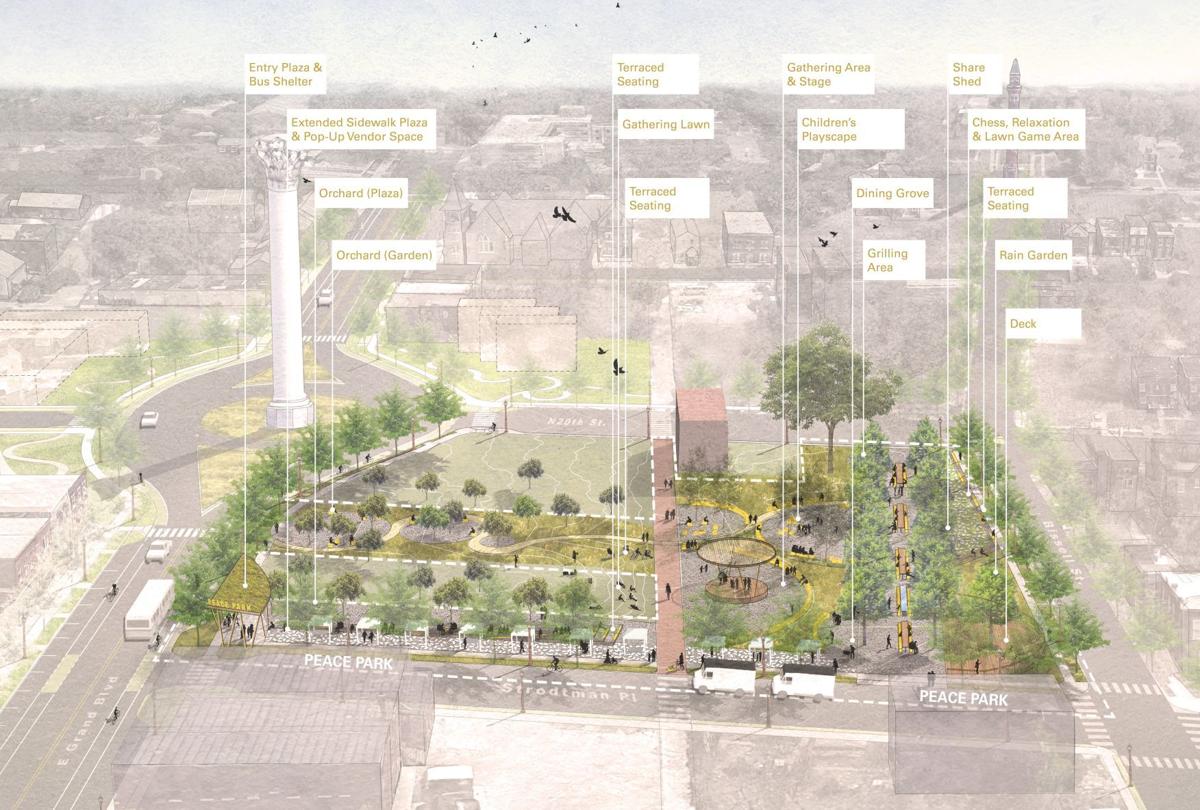 A new St. Louis Community Land Trust will take ownership of Peace Park, an unofficial park in the College Hill neighborhood, and maintain and improve it. A rendering of planned improvements over time, paid for with philanthropic and public dollars. (Rendering via Green City Coalition). 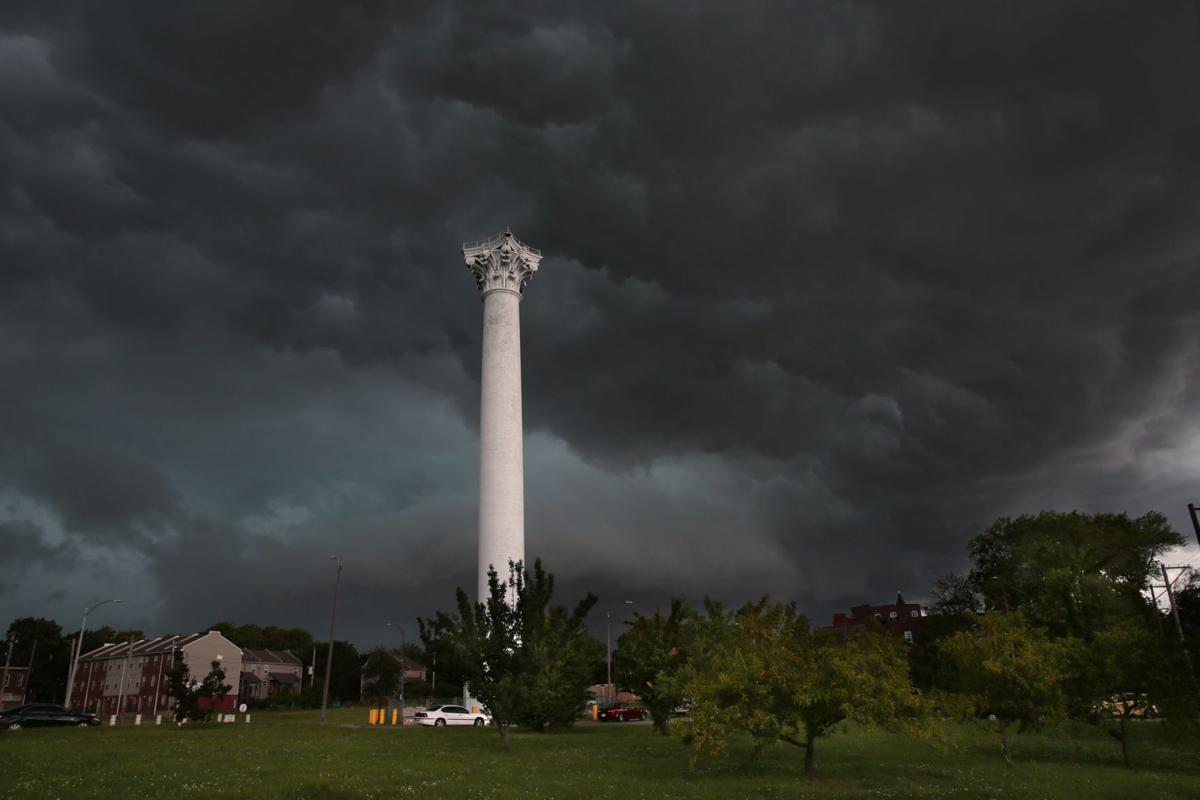 Storms roll into St. Louis, passing over the Grand Avenue Water Tower and Peace Park in College Hill on Thursday, May 27, 2021. Peace Park will be part of a new community land trust approved Thursday to maintain green spaces in four north St. Louis neighborhoods. The land, not an established city park, is dotted with fruit trees including cherry, peach, pear and apples for neighborhood residents to pick. Photo by Robert Cohen, rcohen@post-dispatch.com