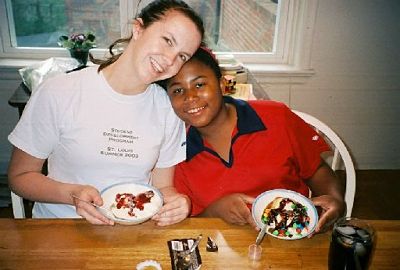 Alexis Evette Richie, right, shows off her homemade sundae with her mentor Eliza Thompson in this 2005 photo. She died after being physically restrained and sedated at SSM DePaul Health Center in October. 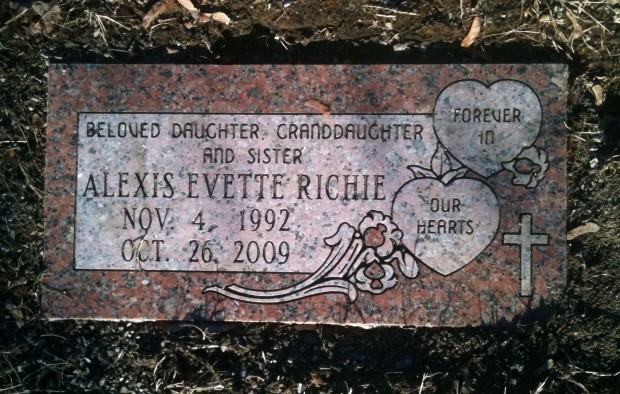 A nurse who failed to start CPR on a teenager who suffocated in 2009 at DePaul Health Center had previously been fired from another hospital, records show.

In a complaint filed in October, the Missouri State Board of Nursing seeks to discipline the nurse, Iris Blanks, for repeatedly failing to meet performance and patient care standards from 2006 to 2008 at Hawthorn Children's Psychiatric Hospital in St. Louis County.

Missouri hospitals are required by law to notify state regulators when they discipline any licensed health care professional.

The nursing board won't say whether Hawthorn complied with that law - and if it did, why the board waited two years to seek discipline.

"All investigations are unique and take different lengths of time," said nursing board spokesman Travis Ford.

The death of Alexis Evette Richie, 16, at DePaul was part of a Post-Dispatch investigation begun last year that revealed how little information is available to patients about medical errors and discipline problems in hospitals.

Although the medical examiner ruled the death a homicide, no charges were filed so the public did not learn about the case until the Post-Dispatch report in August.

Before hiring Blanks in April 2009 to work as a charge nurse in the adolescent psychiatric unit, DePaul did a background check and found "nothing that raised any concerns," said hospital spokeswoman Jamie Newell.

Six months later, Blanks was on duty when Alexis died in October 2009 after a nurse sedated her and two psychiatric aides held her facedown in a bean bag chair.

There is no national tracking system to flag nurses who get fired. Employers must rely on checking an applicant's references, criminal background and status with state licensing boards.

"We follow industry best practices in screening prospective employees and make our hiring decisions based on the most complete and current information available to us," Newell said. "We followed all of these best practices in the case of Iris Blanks."

Hawthorn officials declined to discuss the case. Blanks, 60, of University City, could not be reached for comment.

The new accusations against Blanks say Hawthorn fired her in October 2008 for more than a dozen instances of poor performance, most related to patient care.

In July 2008, she failed to give antipsychotic medicine to a patient whose doctor had ordered that it be administered as needed to quell the patient's urges to harm himself. The patient swallowed a piece from a board game, choked and had to be taken to another hospital, according to the nursing board's complaint.

The nursing board also accused her of failing to follow other orders for medicating patients, failing to supervise a staff member, failing to observe hospital policies, giving a patient drugs without a doctor's order and demonstrating "a pattern of poor nursing practice that could place a patient at risk."

In the DePaul death, Blanks never attempted to revive Alexis after an aide said she had stopped moving, investigative records show.

She called Alexis' name and tapped her on the arm to no response. They rolled the girl over and Blanks found a weak pulse, the records show. Alexis' pupils were fixed and she was soaked in her own urine.

Blanks left the room three times to get equipment and call for help.

"I'm not sure why I didn't start CPR," Blanks told investigators.

The nurse who injected Alexis with the sedatives, Pam Wooten, also failed to check the girl's vital signs or start CPR.

Christine Foster, an aide, said nurses told her not to start resuscitation efforts because there was no breathing mask.

Foster stepped up anyway because "panic took over," she told investigators.

DePaul fired Blanks after the death.

The nursing board filed complaints against Blanks in July and Wooten this month for violating standards of competence in Alexis' death. Both cases are pending.

The Missouri Children's Division, which investigated because Alexis was in state foster care, found that Wooten and the two aides, Leon Harriel and Mike Manetta, had neglected Alexis. Such a finding is reported to a registry that can be used for background checks. It is not public.

At the time it investigated Alexis' death, a federal agency found patients at DePaul to be in a "condition of immediate jeopardy," and the hospital was threatened with the loss of its participation in Medicare.

But nothing was done to alert the public.

States with more transparency say they think their patients are safer.

He distributed unapproved chemotherapy drugs to doctors across the country.

Series: Who protects the patients?

A Post-Dispatch investigation this year has shown how patients are kept in the dark about problems with their doctors and hospitals, and how a…

Alexis Evette Richie, right, shows off her homemade sundae with her mentor Eliza Thompson in this 2005 photo. She died after being physically restrained and sedated at SSM DePaul Health Center in October.

The tombstone for Alexis Evette Richie, who was suffocated at DePaul Health Center in October 2009. Photo by Jeremy Kohler
© Copyright 2021 STLtoday.com, 901 N. 10th St. St. Louis, MO | Terms of Use | Privacy Policy
Powered by BLOX Content Management System from TownNews.com.
You don't have any notifications.