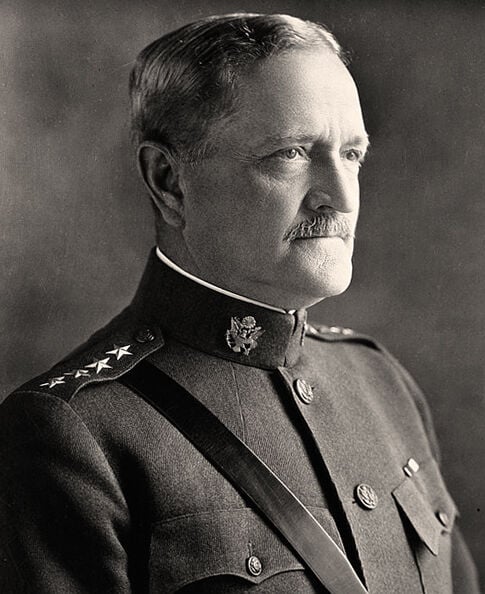 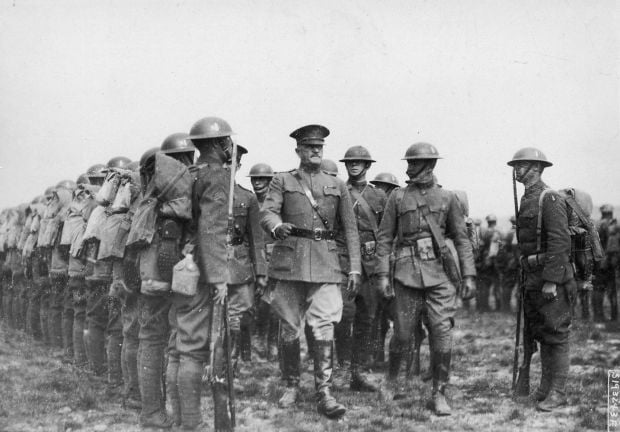 General John J. Pershing, commander of the American forces in France and Germany, inspecting troops of the 89th Division at Trier, Germany, on May 20, 1919.

ST. LOUIS • As World War I slogged through its final year and fighting between Americans and Germans headed toward a conclusion, St. Louisans committed one last act of patriotism.

They renamed the streets.

Kaiser Street became Gresham Avenue. Hapsburger Avenue took the name of a British statesman and became Cecil Place. Von Verson Avenue became Enright Avenue, to honor one of the first Americans killed in the war. And Berlin Avenue became Pershing Avenue as a salute to General John “Black Jack” Pershing, the man who commanded the American troops at war.

In recent weeks, some city residents have sought to reclaim Berlin Avenue by having that name appear as an honorary moniker alongside the official Pershing Avenue in the city’s Skinker/DeBaliviere neighborhood. The proposition, pushed largely by residents of German heritage, has failed to garner much interest from those who live there. But it nonetheless has exposed a slice of St. Louis’ ethnic history.

“We’re not trying to wipe out Pershing,” Jim Merkel, a local author who wrote "Beer, Brats, and Baseball," a book about St. Louis’ German heritage, said in an interview last week. “We just want to remind people that there was something before Pershing.”

Merkel said his goal was to educate area residents of the “anti-German hysteria of World War I,” when the city changed the name of its streets and re-labeled German foods — for example, calling sauerkraut “liberty cabbage.” To that aim he enlisted the help of the German American Heritage Society of St. Louis, which voted last month to support the idea and fund any street signage or plaque commemorating Pershing’s days as Berlin.

In the early part of the 20th century, city Alderman William Tamme announced that the city would rename streets “only at the instance of property owners and residents on thoroughfares which bear objectionable German names.” In 1918, St. Louis Mayor Henry Kiel signed a bill that stripped Berlin Avenue of its name. Residents considered renaming it Woodrow, after President Woodrow Wilson, before settling on Pershing, who was born in Missouri and was the commander of the American Expeditionary Forces. The Berlin Hotel, at Taylor and Berlin avenues, was even rechristened the “Bonair.”

St. Louis wasn’t alone. Cincinnati replaced its German and Berlin streets with the names English and Woodward, respectively. The town of Berlin, Mich., was renamed “Marne,” honoring those who died in a battle in France. Such pursuits were championed by leaders such as former President Theodore Roosevelt, who advocated a harsh line against the German nation.

In the Metro East, residents took things one step further. Robert Prager, a German coal miner suspected by locals of being a spy, was killed by a lynch mob in Collinsville.

St. Louis had a massive German immigrant population. And today, Census figures show it is still the city’s most common ancestry.

Berlin Avenue first appeared in 1871 and spanned Taylor and Kingshighway, before being expanded to the city limit.

“Our board of directors decided to support this financially, as well as morally,” said Lansing Hecker, president of the society and honorary German Consul for Missouri and Southern Illinois. He said an honorary designation would fit well with educating residents during this year’s celebration of St. Louis’ 250th birthday.

Ward 28 Alderman Lyda Krewson agreed to sponsor a bill for the honorary designation if there was support in the community. But residents living along the street appeared unwilling to support the idea. City ordinances require that 60 percent of the registered voters or business owners in the area sign a petition in support before such a move is made.

Given the realities, Merkel has conceded defeat. “If they don’t want it to be there, we won’t be there,” he said.

Merkel said he would try for an honorary street designation someplace else in the city, but he isn’t sure where.

Still, Mark Jaffe, president of the DeBaliviere Place Association, said his organization was open to supporting a plaque on the street if it was “accurate and sensitive to all.” Merkel said he was open to that proposition and would meet with the DeBaliviere association this month.

The city created honorary street designations in 2001. So far, such distinctions have been bestowed on politicians, musicians and athletes. A stretch of Delmar Boulevard is now known as “Barack Obama Boulevard.” The 5400 block of Elizabeth Avenue is known as “Hall of Fame Place,” marking the place where baseball greats Yogi Berra and Joe Garagiola grew up.

“This wasn’t a German section of town,” Jaffe said. And, he said, there may be other reasons against honoring Berlin with a sign: “We’ve got Holocaust survivors who live in the neighborhood.”

Leaders at the military museum are in talks with the Taylor family, History Museum.

'Beers, Brats and Baseball' is a hearty toast to St. Louis Germans

General John J. Pershing, commander of the American forces in France and Germany, inspecting troops of the 89th Division at Trier, Germany, on May 20, 1919.