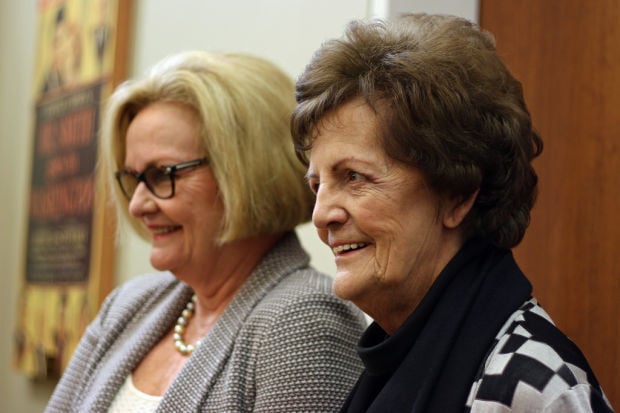 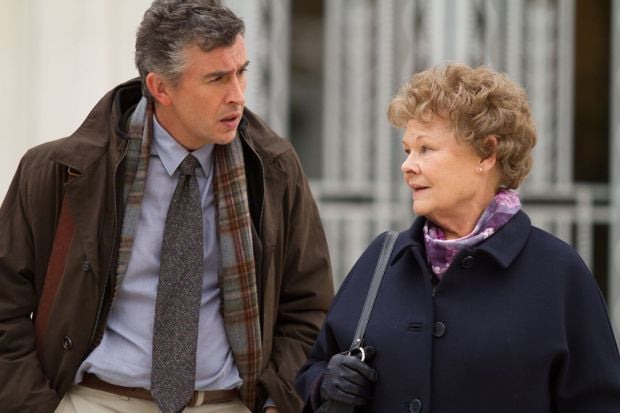 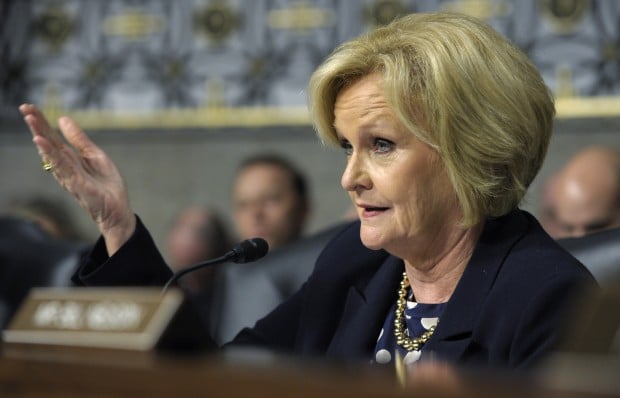 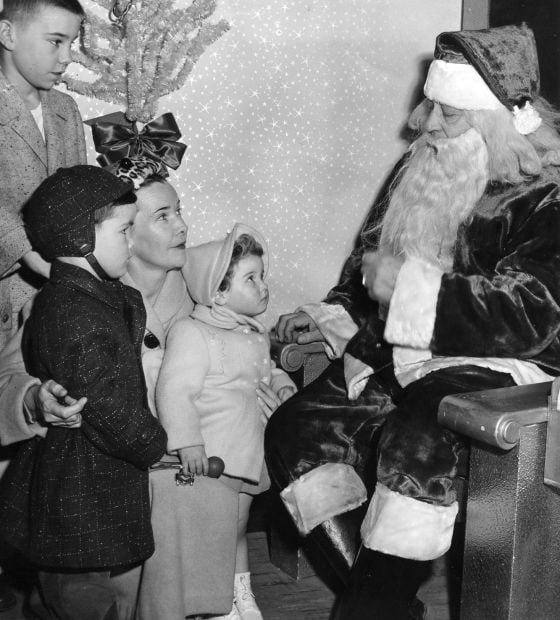 Two young orphans from Ireland, Michael and Mary, meet Santa Claus in December 1955, at a department store with their new foster mother, Mrs. A Michael Hess. At left is Steve Hess, one of the three sons of Dr. and Mrs. Hess. Post-Dispatch file photo 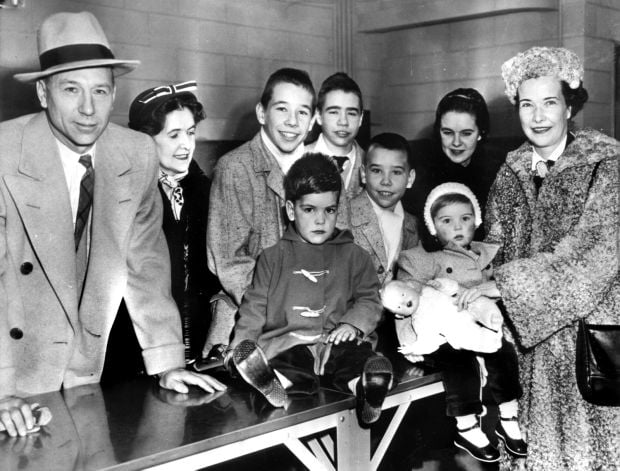 Chicago, Dec. 19 -- IRISH ORPHANS ARRIVE FOR ADOPTION -- Dr. A Michael Hess, left, and his wife, right, of Ferguson, Mo., a St. Louis suburb, greet Michael, 3, and Mary, 2, as the orphans arrived by plane today from Shannon, Ireland. Behind the newcomers, left to right, are the Hesses three children, Jimmy, 14, Tommy, 13, and Stephen, 9. Women in rear are unidentified. Mrs. Hess spent six weeks in Ireland arranging the adoption. (AP Wirephoto) 1955

Philomena Lee’s tireless effort to track down her son who was taken from her at an Irish convent and was adopted by a St. Louis family has inspired an Oscar-nominated film.

Now, her story has prompted a U.S. senator to pressure the Irish government to open its adoption records.

On Thursday, Sen. Claire McCaskill, D-Mo., sat with Lee at a news conference in Washington, calling on Ireland to immediately pass legislation to help reconnect children and their birth mothers.

Specifically, McCaskill is targeting an adoption system — operated under the Irish Catholic church for centuries up until the 1990s — that coerced unwed mothers into convents.

Early last year, the Irish government issued an official state apology for “the nation’s shame” and outlined a plan to compensate those wronged and start a process to make the adoption records public. Yet, many of those records have remained closed.

The film “Philomena” documents Lee’s 10-year effort to try to find her son, who was adopted out of a convent in 1955. Years later, Lee was blocked by nuns at the convent from obtaining vital information to find him. She later learned her son, Michael Hess (named Anthony by Lee), had also been trying to find her and had made two trips to the convent, but was also denied information by the nuns.

Hess, who was adopted by a St. Louis-area family, had risen the in ranks of the Republican Party and was a chief legal adviser in the Reagan administration. He died in 1995 of AIDS without ever finding Lee. His dying wish was to be buried at the Sean Ross Abbey in Roscrea, Ireland, where he was born.

Lee later located a gravestone on the convent property with Hess’ name on it and confirmed he was her son by the July 5, 1952, birth date on the grave marker.

The film has made Lee a symbol for thousands of other forced adoptions in Ireland. McCaskill said Thursday the heartbreaking movie and the St. Louis connection inspired her to take action.

Like other American cities with large Catholic populations, St. Louis was one of several urban hubs for these adoptions. From 100 to 150 children from Irish convents are estimated to have been adopted by St. Louis families, according to McCaskill’s research. She said there may be others in St. Louis seeking their birth parents, and vice versa. Time is running out for many of them to connect, said the senator.

All of McCaskill’s stepchildren are adopted, and one of them has reconnected with his birth mother. “So I know firsthand how important it is to keep those doors open,” the senator said Thursday.

McCaskill said she will consider a Senate resolution or formal letter of protest to the Irish government in its role of keeping many of the adoption records sealed. She noted the U.S. also will be appointing a new Irish ambassador this year, and the issue should be made a factor in that appointment process.

Her actions are backed by the Adoption Rights Alliance, which helped create the Philomena Project in collaboration with Lee and her daughter, Jane Libberton.

Those fighting for more open adoption records in Missouri had been closely following the issue and applauded McCaskill’s actions.

Judy Bock, a co-founder of Adoption Triad Connection of Mid Missouri, said it should be a civil right for all to receive their original birth certificates at some stage in life. Missouri still has highly restrictive policies that mostly ban people from obtaining identifying information to find blood relatives.

Michael Hess was adopted by Michael “Doc” Hess and Marjorie Hess of Ferguson in 1955.

In his book that first told the story of Philomena Lee and Michael Hess, British journalist Martin Sixsmith identified Doc Hess as a physician at a veterans hospital in St. Louis. He was originally from Iowa. The family later moved from St. Louis to the Chicago area, where Michael Hess went to high school. They later settled in Florida. The Hesses also adopted another child, Mary, from the same convent when they adopted Michael.

In 1951, Lee was 18 and unmarried when she became pregnant. She, like thousands of other unwed women expecting babies, were considered fallen and were forced to give birth in Irish convents. Many were coerced to remain and work in manual jobs until they earned their way out. Lee lived in Roscrea with her son and worked long days in the laundry. While still in the convent, she was forced to give up her son for adoption when he was 3.

According to Sixsmith’s account, Marjorie Hess first met Michael in a summer 1955 visit to the convent. She had plans to adopt a girl, Mary. But during her visit, she was also smitten with a little boy who would not leave Mary’s side. The boy was Philomena Lee’s son.

The movie takes some artistic license in telling Lee’s story. For example, the movie shows Lee watching her child being led to a car and driven away from the convent by the Hesses. But according to the book, Marjorie Hess returned to the United States after meeting Michael and Mary. A few months later, the children flew alone to Chicago, where the Hess family welcomed them.

A Post-Dispatch photograph from December 1955 shows the children, newly arrived in St. Louis, meeting Santa Claus for the first time.

The movie also chronicles Lee visiting Washington with Sixsmith in their search to find her son. Lee praised the movie, but she said Thursday it was her first visit to Washington.

After he wrote the book, Sixsmith became a harsh critic of the Irish Catholic church’s actions and its shaming of young women.

Indeed, Lee said Thursday she was stripped of her identity and forced to live under another name at the convent. She and other mothers there were told never to speak of the children because of that shame, and she kept the fact she had a son from her later family for decades.

Lee also said the nuns were not honest with her son, who was dying when he traveled from Washington to Ireland to ask one more time for help finding her.

“They originally told him that I had abandoned him at 2 weeks old,” she said. “But I was there for 3½ years with him working in the laundry. He died thinking of me.”

In the movie, actress Judi Dench plays Lee, and Steve Coogan plays Martin Sixsmith. The film has been nominated for four Academy Awards, including best picture and best actress.

Don Schroeder had the help of an "angel" in tracking down his past to Washington, Mo.

Margie and Ed Hopper were caring for six foster children in a mobile home when a charity called Angel's Arms came in to help.

Two young orphans from Ireland, Michael and Mary, meet Santa Claus in December 1955, at a department store with their new foster mother, Mrs. A Michael Hess. At left is Steve Hess, one of the three sons of Dr. and Mrs. Hess. Post-Dispatch file photo

Chicago, Dec. 19 -- IRISH ORPHANS ARRIVE FOR ADOPTION -- Dr. A Michael Hess, left, and his wife, right, of Ferguson, Mo., a St. Louis suburb, greet Michael, 3, and Mary, 2, as the orphans arrived by plane today from Shannon, Ireland. Behind the newcomers, left to right, are the Hesses three children, Jimmy, 14, Tommy, 13, and Stephen, 9. Women in rear are unidentified. Mrs. Hess spent six weeks in Ireland arranging the adoption. (AP Wirephoto) 1955