Become a Member
Read Today's E-edition
Share This
Plans for a St. Louis County soccer complex have become a political football
0 comments
Share this
1 of 2 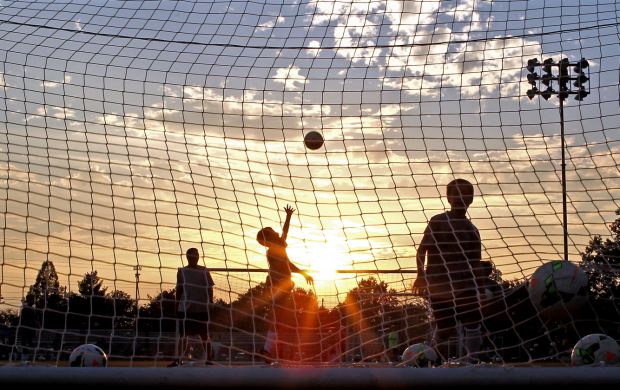 Children work on practice drills and soccer fundamentals at a St. Louis-area field on Sept. 18, 2013. Photo by Christian Gooden, cgooden@post-dispatch.com 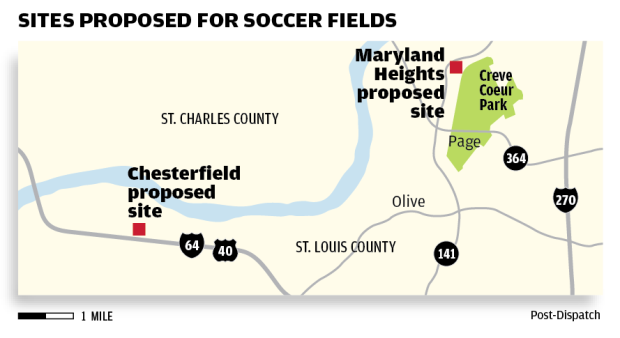 ST. LOUIS COUNTY • Plans for a major soccer and hotel complex in Chesterfield have turned into a political football.

“Why is it being held up?” asks Bridget Nations, membership director of the Chesterfield Chamber of Commerce. Nations then answered her own question:

“Because a county councilman is challenging the county executive in a primary. And that’s not fair.”

The prospect of a $12 million addition to the Chesterfield Valley Athletic Complex has been kicking around the St. Louis County Council since the appearance of Kansas City developer David Thorman at a council meeting April 1.

Thorman told the council of a plan, a year in the making, to build eight fields for soccer, lacrosse and field hockey, 16 sand volleyball courts, a clubhouse that will double as space for the St. Louis Soccer Hall of Fame and a 125-room Marriott Fairfield Inn and Suites on a parallel road off Highway 40 (Interstate 64) and bracketed by two recently opened outlet malls.

The site, Thorman said, is ideally situated to attract traveling squads from a 300-mile radius to St. Louis County.

As Thorman delivered his presentation, an aide to Charlie Dooley stood nearby with a written statement proclaiming the county executive’s full support of a proposal that calls for county funding of $4 million, with Thorman’s firm, Global Sports International, financing the remaining $8 million.

The 4th District councilman afterward blasted the plan as an attempt by Dooley to “buy soccer votes” in his August Democratic primary showdown with County Councilman Steve Stenger.

To O’Mara, a Stenger supporter, the Chesterfield overture also represents a personal affront that undercuts his own three-year quest to get county funding for the construction and operation of a regional soccer complex in and near Creve Coeur Park, situated in Maryland Heights.

O’Mara’s passion for the Maryland Heights project is such that he briefly stalled passage of the 2013-14 county budget because it didn’t include an allocation for the project.

The councilman recently reiterated that the Chesterfield facility, as envisioned by Dooley and Thorman, is doomed.

“Why do we have to pay someone from Kansas City to run soccer in St. Louis?” asks O’Mara, a former professional soccer player soon to be inducted into the St. Louis Soccer Hall of Fame. “I’m going to do everything I can to move forward with the Creve Coeur Park soccer complex.”

Dooley credits O’Mara for initiating the discussion about making a site in the St. Louis area a destination for high-level soccer competitions.

“But Mr. O’Mara’s proposal just didn’t make as much sense to us as other proposals,” the county executive said.

The county executive’s sentiments notwithstanding, there seems to be little inclination on the part of other council members to advance the Chesterfield proposal.

“The council hasn’t had adequate time to consider it yet,” said 3rd District Councilwoman Colleen Wasinger, a Republican.

The standoff has had the unintended effect of placing two of the area’s premier amateur soccer clubs in the middle of a political skirmish.

The four and possibly five soccer fields O’Mara proposes to add to the four fields already at Creve Coeur Park would, in addition to hosting multistate tournaments, become the home turf of the Scott Gallagher Soccer Club.

The Lou Fusz Soccer Club, headquartered on the outskirts of Creve Coeur Park, would gain two to four new fields as well as water and sewer service. Tournament play would also unfold on the Fusz turf.

Under a compromise advocated by Dooley and Thorman, tournament games would be held at both Maryland Heights and Chesterfield sites.

O’Mara argues it makes more sense logistically, particularly for families and college recruiters visiting from out of town, for tournaments to be staged at a single location — Maryland Heights.

The councilman favors turning Chesterfield into a site primarily for lacrosse, volleyball and field hockey tournaments.

There is one area of agreement between O’Mara and the Chesterfield proponents.

Both sides say it makes no sense for a region that boasts it is the U.S. amateur soccer capital to watch teams travel to Kansas City, Memphis and Chicago for elite tournament play.

Meanwhile, the two big local soccer clubs are trying to stay out of the crossfire.

Patrick Barry, executive director of Scott Gallagher, said he can see merit in perhaps building a soccer complex in Chesterfield while expanding the Maryland Heights facilities.

“But it’s gotten pretty political, so we want to stay out of it,” Barry said.

“It’s a political game between the parties,” he said. “We’d like to be neutral.”

Approval for a sports complex that Thorman says has the potential to draw athletes and families from 16 states is a “no-brainer,” said John Hammond, chairman of the board of Frontenac Bank and director of Progress 64 West — a nonprofit group promoting West County development.

The addition of the soccer fields, Hammond and other business leaders say, is the logical extension of a retail corridor that now includes the outlet malls and a re-envisioned Chesterfield that is the new site of Taste St. Louis and other regional events.

Chesterfield government is also on board.

“There’s a huge demand for it,” said Mike Geisel, director of public services for the city.

Proponents of the Chesterfield site say the county has nothing to lose from a financial standpoint because Chesterfield funnels its sales tax receipts into a shared revenue “pool.”

“Whatever is earned here goes to the rest of the county, so what’s the big deal?” said Hammond.

The disagreement even extends to price tags: O’Mara estimates the Maryland Heights expansion will come in at a shade under $13 million. Dooley and Thorman contend the project will cost more than twice that amount.

Chesterfield, Thorman says, “is a true public-private partnership. And with all deference to Mr. O’Mara, his is a $30 million proposition that will fall on the backs of the taxpayers.”

O’Mara said he is trying to get some private investment as well.

The option for developing the Chesterfield property expires in September; Thorman and Geisel are confident GSI will be able to rework an extension if the County Council doesn’t act on the proposal by that time.

Regarding the editorial "No mercy" (June 6):

Developer of Chesterfield soccer complex may proceed without county money

Question: Can Chesterfield and Creve Coeur Park could co-exist as local soccer destinations?

County executive, council blame each other for lack of communication

Who's on first? Depends on which candidate paid for the poll

Children work on practice drills and soccer fundamentals at a St. Louis-area field on Sept. 18, 2013. Photo by Christian Gooden, cgooden@post-dispatch.com