Updated at 10:55 p.m. Friday with information from Friday’s protest.

As demonstrations sat in front of City Hall playing music, eating, drinking and playing games for the third consecutive night, there was little difference between the scene Thursday night and the one Friday, despite police clearing the encampment less than 24 hours earlier.

Just before 4 a.m. Friday, police cleared a few dozen people and about 20 tents from outside City Hall, where protesters have said they intend to stay until Krewson resigns.

No arrests were made, and no one was injured when the protesters were cleared.

A city crew also washed away a large message of “Resign Lyda” that protesters painted in yellow letters on the street outside City Hall.

But on Friday evening, protesters returned in large numbers.

Among the organizers of the protests was Milkayla Allen, 23. Allen’s name and address were read aloud by the mayor while Krewson was reading letters during a June 26 Facebook Live video, Allen said.

“She’s aware of the power that she holds, and so her getting on Facebook Live was a gross misuse of power,” Allen told the Post-Dispatch in an interview earlier this week. “She gave ammo to whoever wanted to act upon it.”

Protesters crossed Tucker Boulevard about 6 p.m. Friday, many with “Resign Lyda” signs in hand. The grass in front of City Hall, where protesters set up tents and stayed overnight the past two nights, was blocked off by barriers, and a sign read “Park is closed.”

“The occupation is still going strong,” said Alex Cohen, another leader of the demonstrations. “They can’t stop the movement.”

Many people at Friday’s protest had also been at City Hall the previous two nights, but some new faces said they came out for the first time after hearing police had broken up the encampment overnight.

Among the crowd were elected officials and members of various community organizations, including John Bowman Sr., president of the St. Louis County chapter of the NAACP.

A statement from the protest group, Occupy City Hall STL, Friday morning estimated that more than 200 police officers dressed in riot gear were sent to clear the gathering.

“Cars began to be towed at 3 a.m.,” the statement said. “Three dispersal orders were given for the reason of trespassing on park grounds past curfew.”

Police say there had been a few violent incidents at the demonstration.

A 59-year-old was stabbed in the shoulder while attending the protest by a man also attending the event, according to St. Louis police. The attacker then threw the victim’s tent into the street, police said.

The 59-year-old went to a hospital for treatment and was stable, police said.

City officials also reported that two city workers were assaulted at the protest Thursday morning as they attempted to tow cars parked in front of City Hall.

Police said protesters surrounded the city workers, climbed on top of the tow truck and laid down in the street in front of the truck.

Two men then attacked the workers, police said. One of the employees was hit in the face with an assault rifle, city Director of Public Safety Jimmie Edwards said in a statement. The other man was punched in the back of the head, Edwards said.

Protesters disputed the police account of both events, saying they were not representative of the group’s peaceful nature. The group also said the city escalated tension by trying to tow protesters’ vehicles rather than just issuing tickets.

After police cleared the protesters Friday, some decided to continue the demonstration outside the mayor’s home. There have been several days of protests outside the home since late June, including nights where protesters made noise for several hours to push the mayor to resign.

“We immediately rallied and made our way to the mayor’s house to let her know that intimidation won’t work on us,” the statement from the protest group Friday said.

Krewson’s Facebook video that prompted the protest was deleted a few hours after it was posted in late June, and the mayor apologized for reading the names and addresses. A petition for Krewson to resign following the video had garnered more than 60,000 signatures by Wednesday. Protesters contend she jeopardized their safety by publicizing their names and addresses.

Krewson has said she will not resign.

Editor’s note: This version of the story has been updated to correct the use of an incorrect pronoun. 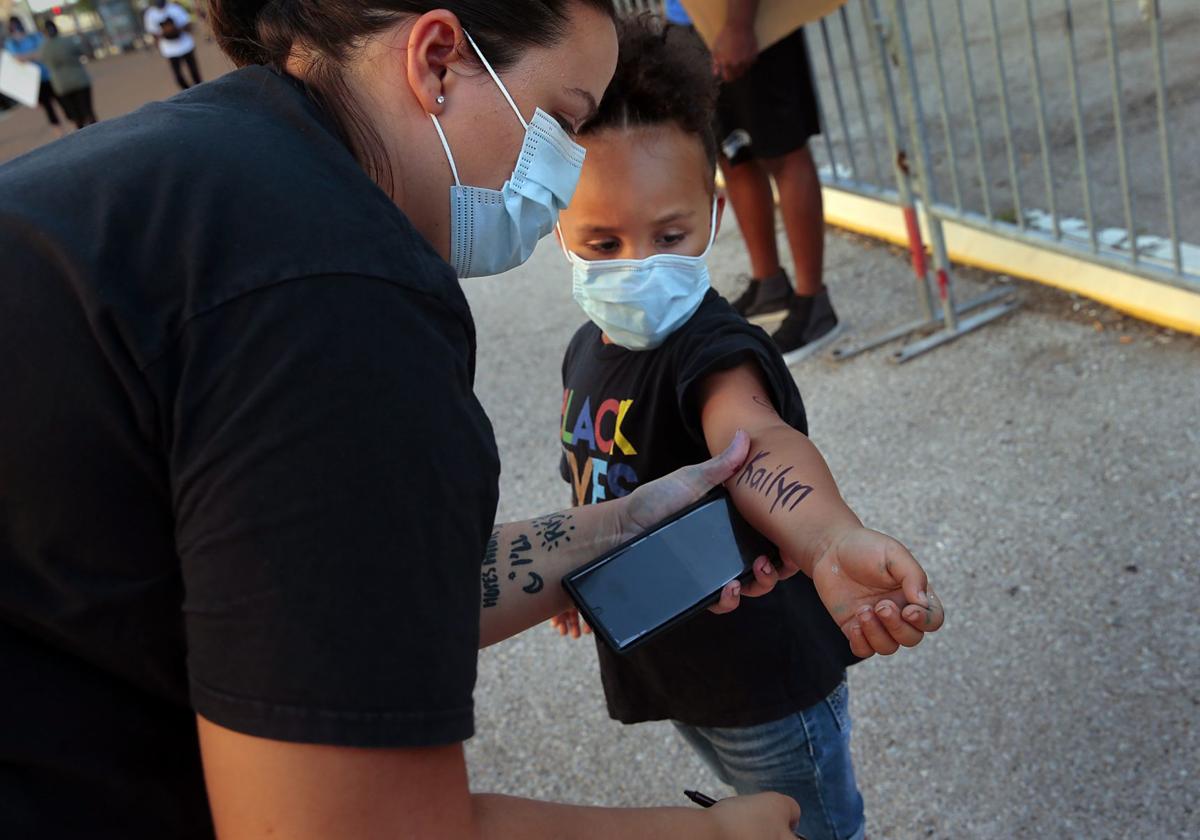 Alexandra Kayser of Normandy writes the name of her daughter Kailyn Kayser, 5, and phone numbers on her child's arm as protesters returned to City Hall on Friday, July 10, 2020 after police cleared the area early that morning. "I write family phone numbers on her arms in case we're separated by the police or other reasons," said Kayser, who also had the jail support phone number written on her arm in case she was arrested. Photo by Robert Cohen, rcohen@post-dispatch.com 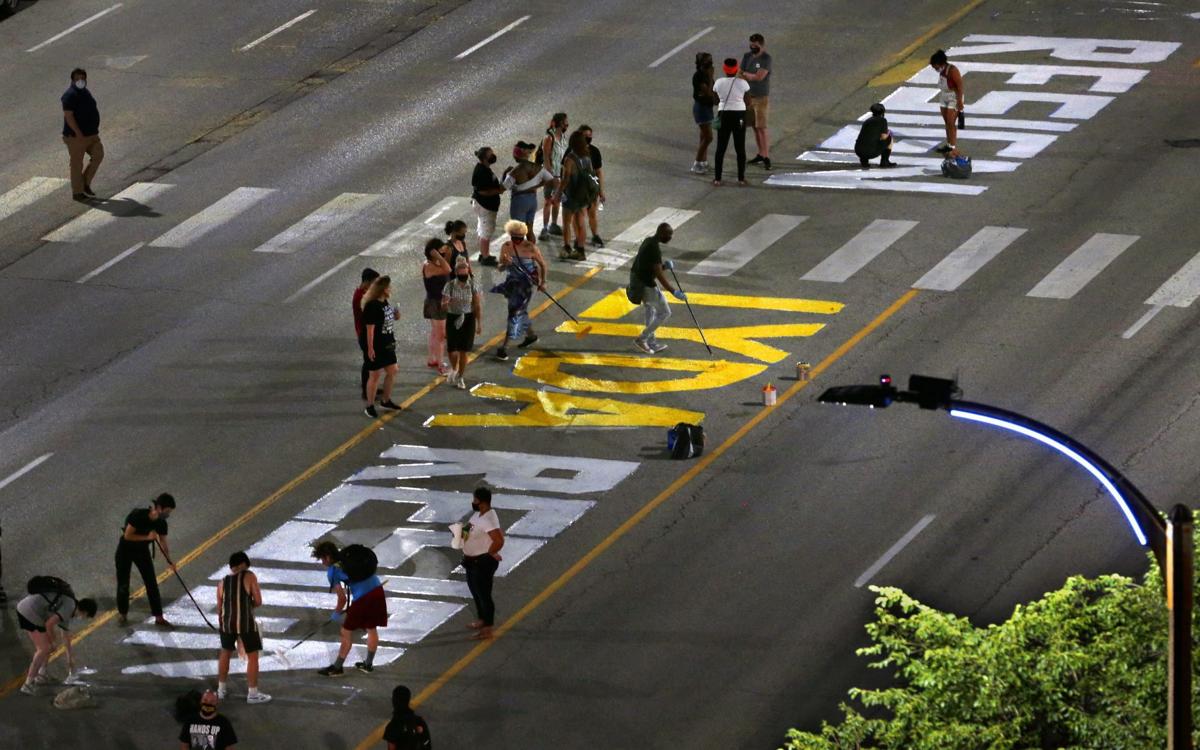 Protesters call for the resignation of St. Louis Mayor Lyda Krewson on a painted Tucker Boulevard in front of City Hall on Thursday, July 9, 2020. A campout in front of the building began Wednesday afternoon. Photo by Robert Cohen, rcohen@post-dispatch.com 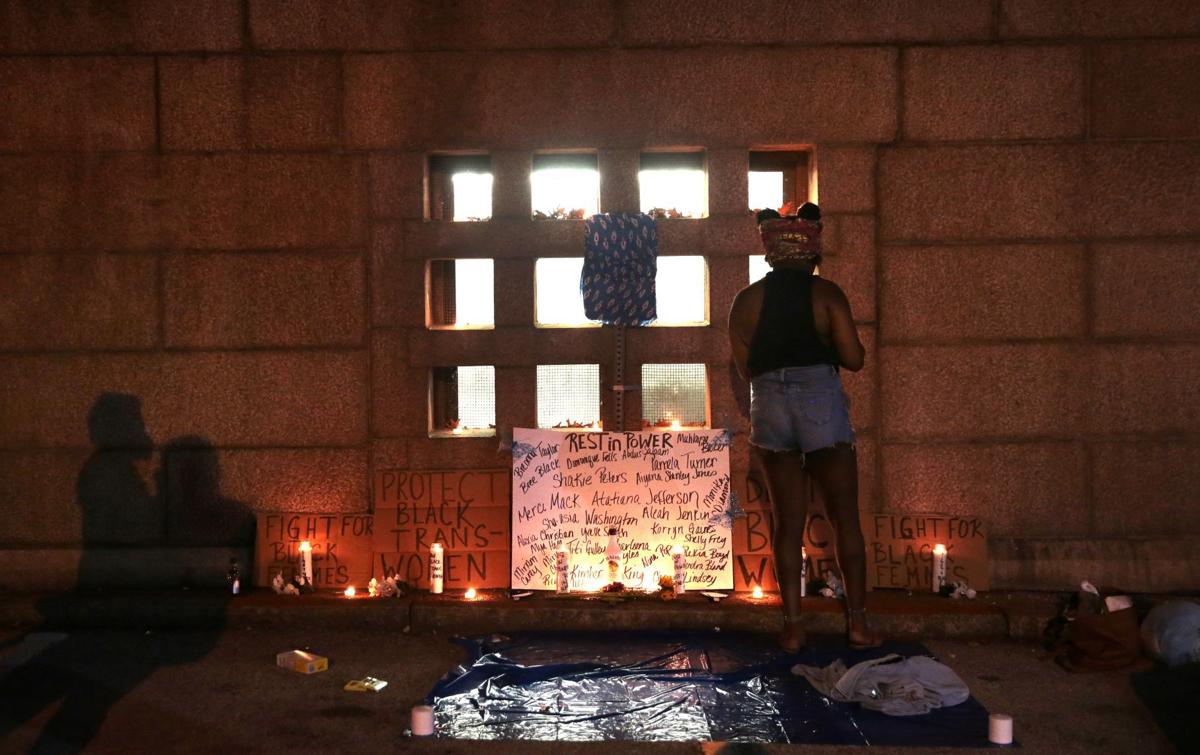 A memorial to Black women is visited by protesters on the side of City Hall on Friday, July 10, 2020 after police officers cleared the area early that morning. Photo by Robert Cohen, rcohen@post-dispatch.com 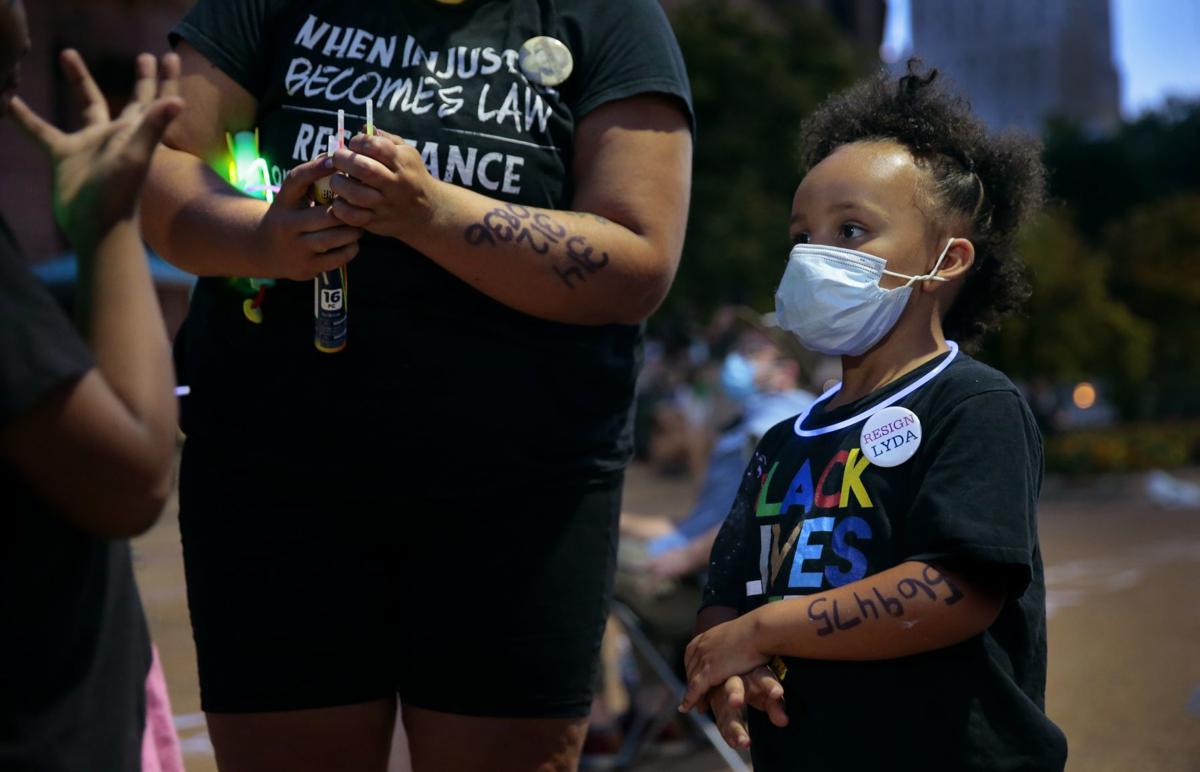 Kailyn Kayser's mother Alexandra wrote family phone numbers on her daughter's arms as protesters returned to City Hall on Friday, July 10, 2020 after police officers cleared the area early that morning. "I write family phone numbers on her arms in case we're separated by the police or other reasons," said Kayser, who also had the jail support phone number written on her arm in case she was arrested. Photo by Robert Cohen, rcohen@post-dispatch.com 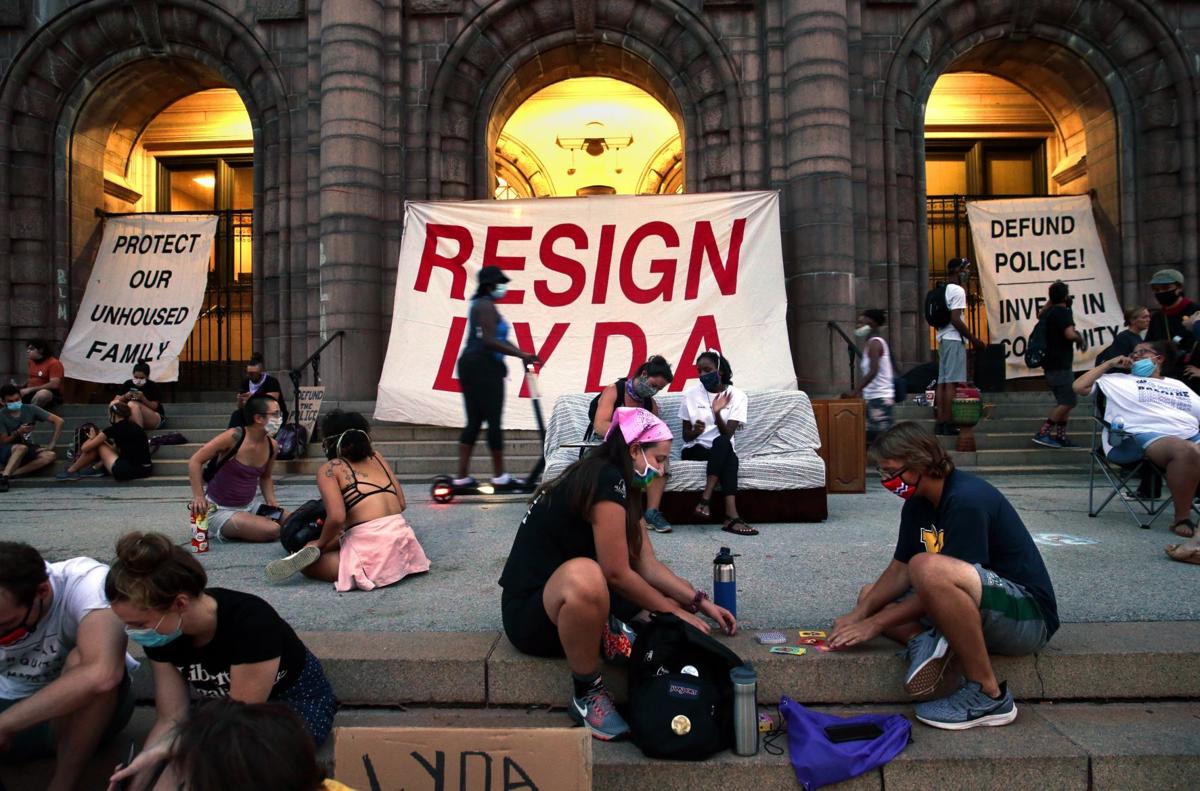