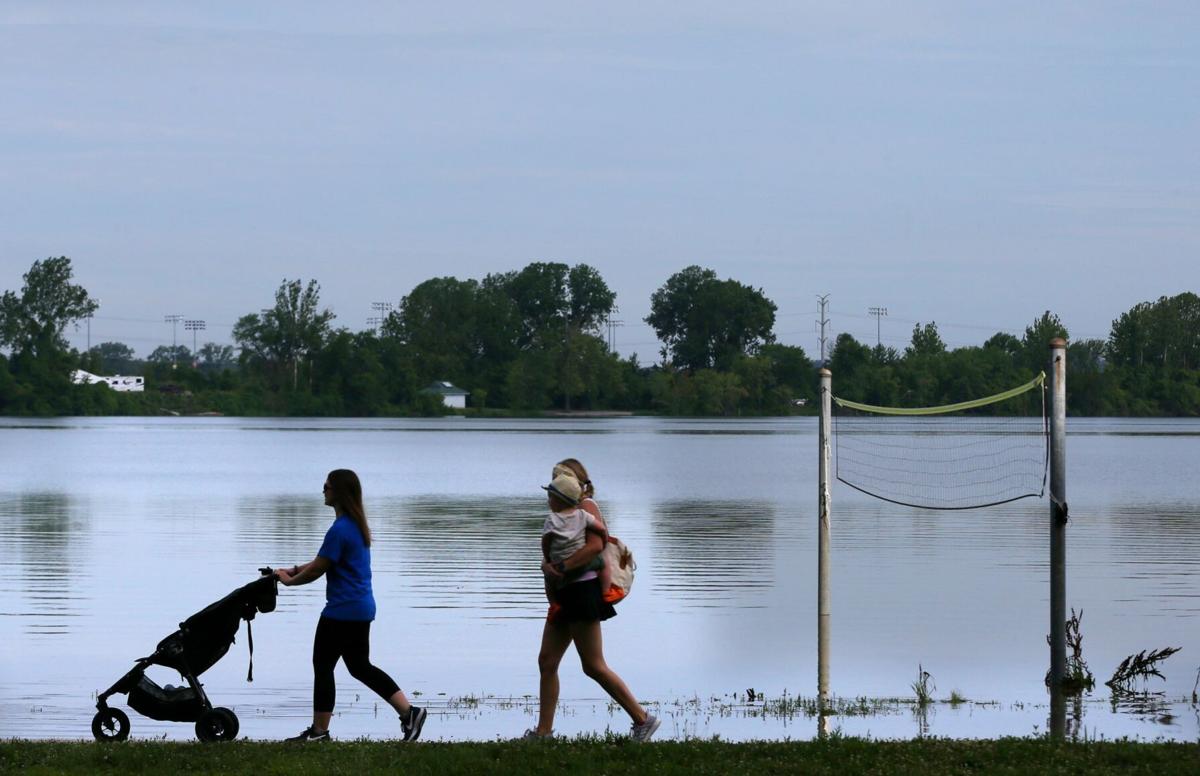 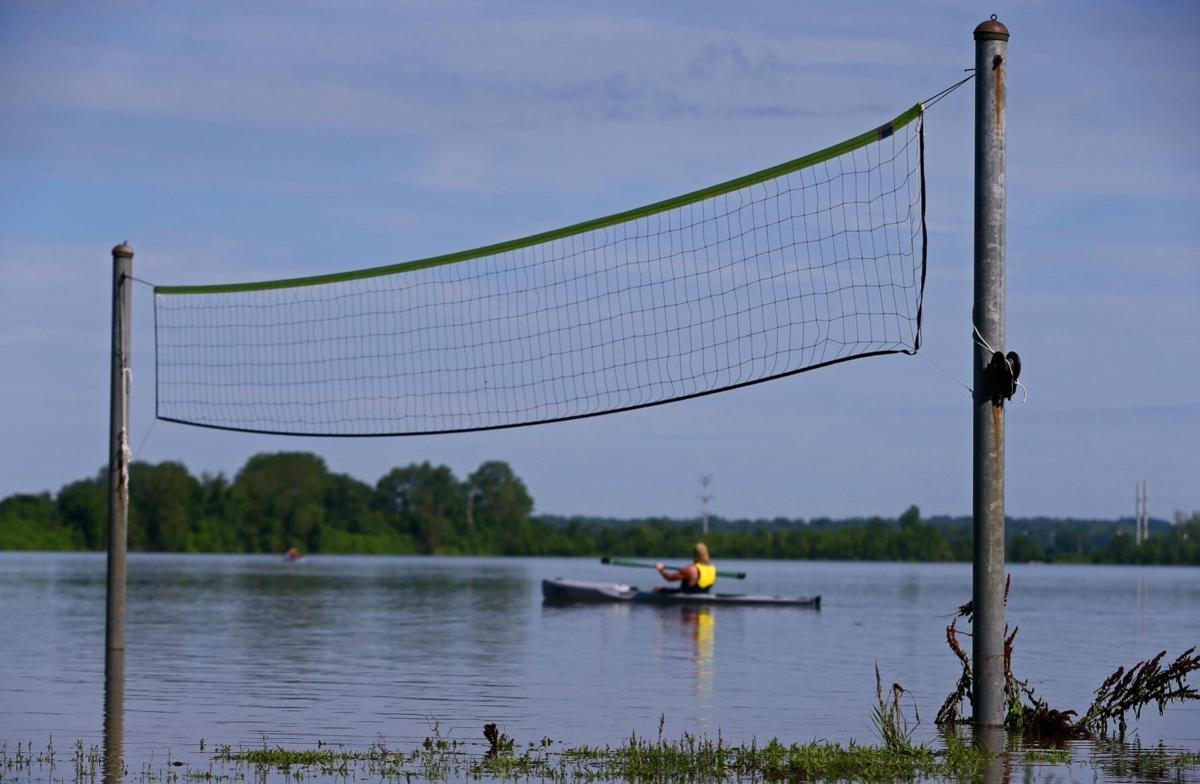 The volleyball courts on the beaches at Creve Coeur Lake remain submerged on Tuesday, June 29, 2021, as a kayaker paddles past on the lake's southeastern shore. A St. Louis County park ranger attributes the high water to recent area rainfall. Photo by Christian Gooden, cgooden@post-dispatch.com

ST. LOUIS — An intense stretch of recent rainfall has triggered flash flooding and pushed regional rivers to — and sometimes beyond — the brink of minor flood stages.

Lincoln County’s Cuivre River crested just above 31 feet this weekend at Old Monroe, about 45 miles northwest of St. Louis, reaching a major flood stage and forcing road closures. The Missouri River at Hermann has been at moderate flood heights since Saturday. And the Mississippi River at St. Louis neared minor flooding on Monday.

National Weather Service experts, though, say that St. Louis-area river levels are not expected to pose any widespread, serious threat, even with some additional rain in the forecast over the coming days.

“This all stems from the rain we had over the weekend, pretty much,” said Mark Fuchs, a hydrologist with the weather service’s St. Louis Forecast Office. The rivers’ recent rises were “quick and really all associated with flash flooding,” he said.

Based on weather readings at St. Louis Lambert International Airport, the area has received slightly more than 5 inches of rain in the last week and a half. Prior to that, the region had seen almost no precipitation in June, but now has 1 inch more than usual for the month.

“We went from being way below normal to being a little above normal,” said Fuchs.

Accumulating all that water in a relatively sudden window has caused the region’s rivers and lakes to rise quickly.

The Mississippi River at St. Louis, for instance, rose more than 20 feet in about three days — climbing to a crest of almost 30 feet Monday, compared to about 7 feet early Friday morning.

Fuchs said the most notable regional flooding is along the Missouri River near places like Hermann and Jefferson City. He added that the river is also giving St. Charles County a close brush with moderate flood stages, although the area is expected to stay below that threshold.

Rain over the coming days is not expected to be severe, or worsen local flood conditions, Fuchs said.

Officials say the Missouri is unlikely to flood seriously through September. Drought in the upper reaches of the basin — like Montana and the Dakotas — has kept the river low until now. That has led to little water being released upstream from the Gavins Point Dam at Yankton, South Dakota.

“Because it’s been so dry in the Dakotas, they’re not releasing that much,” said Fuchs.

Smaller watersheds, like those of the Cuivre and Meramec rivers, are inherently more sensitive to single or short-term weather events because they drain more localized areas. But in recent years, repeated near-record floods on the region’s major rivers, like the Mississippi and the Missouri, have caused some critics to scrutinize river management policies throughout those basins. They argue that an overreliance on levees constricts the rivers and pushes water higher, instead of letting it fan out across a natural floodplain.

“It’s probably fair to say we’re seeing more types of those events in recent years than we were seeing 20 to 30 years ago,” he said.

Parkway Superintendent Keith Marty on Thursday warned of severe consequences for the graffiti.

Ferguson city officials and Urban League staffers fanned out across the complex on Wednesday to offer rent assistance.

A Memphis company is proposing a $119 million, 385 apartment rehab of one of downtown’s most conspicuous vacant buildings.

Applicants to be the next St. Louis police chief are rolling in. Here’s how they’ll be judged.

The clock is ticking: Chief John Hayden retires in February, and the department hopes to narrow a pool of contenders to six finalists this fall.

The cold front is expected to visit the region sometime after midnight, and showers should stick around until about 7 a.m. Tuesday.

Residents sued the city citing restrictions on Lindell in a 1909 deed, litigation they admit was intended to force the city to make road improvements.

Evictions at Pleasant View Gardens have been paused by the owners, says Matthew Chase.

The volleyball courts on the beaches at Creve Coeur Lake remain submerged on Tuesday, June 29, 2021, as a kayaker paddles past on the lake's southeastern shore. A St. Louis County park ranger attributes the high water to recent area rainfall. Photo by Christian Gooden, cgooden@post-dispatch.com