‘Rebuilding a city’: Demolition activity in St. Louis up one year after Krewson outlined vacancy plan
0 comments
Share this 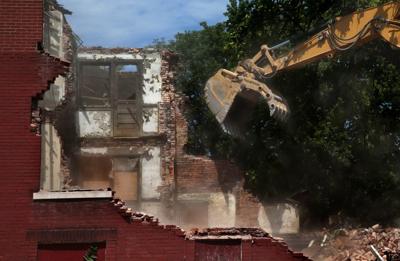 ST. LOUIS — Demolition of abandoned, broken buildings is on the rise. The number of properties held by the city’s land bank is down. Contractors are, for the most part, following a new, safer demolition protocol.

A year after Mayor Lyda Krewson outlined a plan to address vacancies, data shows an uptick in demolition activity in the city of St. Louis.

But it’s early in a multiyear effort to address thousands of structures, and there’s still skepticism in some communities.

“Residents are not trusting at this point,” said Sundy Whiteside, co-chair of the St. Louis Vacancy Collaborative advisory committee, which includes representatives of housing and neighborhood groups and others working to address vacancy and blight in the city.

Whiteside, who lives in the Walnut Park East neighborhood, said getting residents on board with the city’s plans is key.

“We are going to have to unite in the trenches together for the next seven, eight years to make sure it is fair, it is equitable, it is transparent, so that we can gain and earn the trust of residents,” she said.

Part of earning that trust is demolishing the unsafe buildings residents have complained about for years. So far this year, 253 publicly funded demolitions have been completed — with a goal of more than 700 by year-end. In 2018, the total was 358, compared to 149 in 2017.

Krewson’s plan acknowledged the decadeslong problem of vacancy in the city, caused by population loss, suburban growth, older housing stock and a history of racial bias.

Krewson and the Board of Aldermen found about $3.5 million to dedicate to the demolition of vacant buildings last year. Before that, the city had only a few hundred thousand dollars for demolitions in the general revenue budget, Krewson said, and the money was used for emergency demolitions only.

“I would say it like this: When the building fell down, we came and picked it up out of the street,” Krewson said.

In the fiscal year 2020 budget, approved last month by the Board of Aldermen, $4.2 million is allocated for building demolition, an increase of more than $600,000.

That’s just a fraction of what’s needed, though. City officials previously told the Post-Dispatch it would cost $40 million to demolish all of the vacant buildings in the city.

At the same time the city’s building division is ramping up its demolitions, the Metropolitan St. Louis Sewer District is in the middle of its own plan, the Urban Greening Program, to demolish vacant buildings to create more green space for rainfall absorption.

According to the STL Vacancy Portal, an online site developed by the Vacancy Collaborative, MSD is responsible for $3.8 million worth of demolitions since the beginning of last year. The city spent $4.3 million in the same time frame. Operation Clean Sweep, a neighborhood improvement program led by Better Family Life, contributed 35 demolitions.

The vast majority of demolitions completed since the beginning of last year, 579 out of 611, were in north St. Louis.

Building Commissioner Frank Oswald said the scale of spending in the most recent fiscal year, $6.4 million, was “enormous” compared to the prior year. The funds are a combination of city and sewer district dollars.

More demolitions mean more vacant lots. The Forestry Division’s budget was expanded by $500,000 this year for the costs associated with the additional maintenance of the lots. Maintaining the lots left behind by demolished buildings is an important step in inviting development, said Bob Lewis, a co-chair on the Vacancy Collaborative’s advisory committee.

“If they look nice, neighbors are going to feel better about it,” Lewis said. “But also investors and developers.”

Members of the vacancy team also introduced a new protocol for demolitions to limit the spread of resulting dust, which can carry toxins from lead and other heavy metals present in paint used on old homes.

Prior to September, demolition companies were only required to spray the site with a hose prior to demolition. Now they are also required to use powerful misting fans to keep the project damp while the demolition is ongoing.

The city held a mandatory meeting for contractors to go over the new standards and issued a new demolition handbook, according to Laura Ginn, St. Louis Development Corp. project manager.

“Our misting fans are being utilized on a regular basis,” Oswald said. “People are doing what they’re supposed to do.”

From the scene of a recent Operation Clean Sweep event in Hamilton Heights, KMOV reporter Russell Kinsaul tweeted footage showing a demolition with no fire trucks or misting fans present, which are both required under the new protocol.

Tipping Point: A legacy of neglect

A series looking at the consequences of decades of disinvestment in St. Louis. See all related stories at stltoday.com/tippingpoint

In response, Ginn, who is heavily involved in the Vacancy Collaborative’s work, wrote, “Systems change is hard, and slow and we can and will do better.” She added that crews began working before the proper wetting took place, and “it will not happen again.” Ginn later told the Post-Dispatch that the contractors started about an hour before they were supposed to.

Those who violate the new demolition protocol can be fined $500 — double the $250 the city charges for renting misting fans. Since September, two demolition companies bought their own misting fans, Ginn said. The city has fined one company since the new procedure went into effect. Companies in violation can be fined, and “we generally have a discussion with them,” Oswald said.

An increase in demolitions was one of Krewson’s main goals in the plan. Reducing the city land bank’s inventory was another.

At this time last year, the Land Reutilization Authority held more than 12,000 properties in its portfolio. Now the number is 11,355.

“So that’s progress,” Krewson said. “I wish it was more.” She and Oswald attributed the decrease to a better economy and increased interest in city real estate. The city issued building permits for $1.2 billion worth of construction last year, Krewson said, though the total includes large nonresidential projects like hospitals and other commercial buildings.

To keep the momentum going, several vacancy-related hires are on the way. Patrick Brown, the city’s chief resilience officer, and Austin Albert, the vacancy strategy senior project manager, both left for other jobs. Interviews are ongoing to replace both of those positions, Krewson said.

The St. Louis Development Corp. will also be posting two jobs within the next few weeks, Ginn said, including a stabilization program manager for Proposition NS funds. The timing of when bonds for the neighborhood stabilization proposition will be issued is uncertain, the mayor said, but the goal is to issue some before the end of the year.

A yearlong research position sponsored by AmeriCorps and the Mission: St. Louis organization recently opened up on the city’s vacancy portal. The goal of the position, according to the listing, is to build capacity, conduct research and ensure long-term sustainability of the Vacancy Collaborative.

Krewson and her staff are cautiously optimistic about what’s been done and what’s to come. But from one resident’s perspective, seeing a couple of buildings demolished feels like a drop in the bucket.

Shadiah Thomas last year told the Post-Dispatch she was tired of kicking syringes out of the way when she took her kids outside to play.

She described hearing gunfire often, seeing drug usage right outside of her front door and being broken into twice in one year.

“It’s not safe over there, especially when you have children,” Thomas said of their rental property in the 3900 block of Labadie Avenue. She and her five children moved out at the end of May, and are now staying with family while she searches for housing in a better neighborhood.

The city demolished two of the 11 vacant buildings — or “vacos” as Thomas and her former neighbors refer to them — on her former block on Labadie Avenue last fall, according to the city’s vacancy portal.

“It made the drug people move into the other vacos that was next to our house,” Thomas said. “It didn’t help.” Thomas also cited property maintenance issues, separate from issues related to surrounding buildings, that contributed to her decision to move.

Krewson said she recognizes just tearing down buildings won’t fix the problem, and that’s why she says she backs the work of the Vacancy Collaborative.

“This is really hard work, but it is part of rebuilding a city.”

Photos of vacant homes in 2018

The man was found dead with gunshot wounds just before 11:30 p.m. Wednesday in a vacant residence in the 3100 block of Meramec Street, St. Louis police said.

Fight against blight in St. Louis gets boost from Twitter’s Dorsey, Detroit’s Pulte

Tipping Point: A legacy of neglect

The city faces enormous challenges because of decades of disinvestment. This series looks at consequences — and possible solutions. To also se…

The program aims to ensure that properties can be rehabilitated for future occupancy.

The Missouri Department of Conservation is committing $1 million to a new nonprofit that will have its own staff and manage hundreds of the city’s vacant lots. 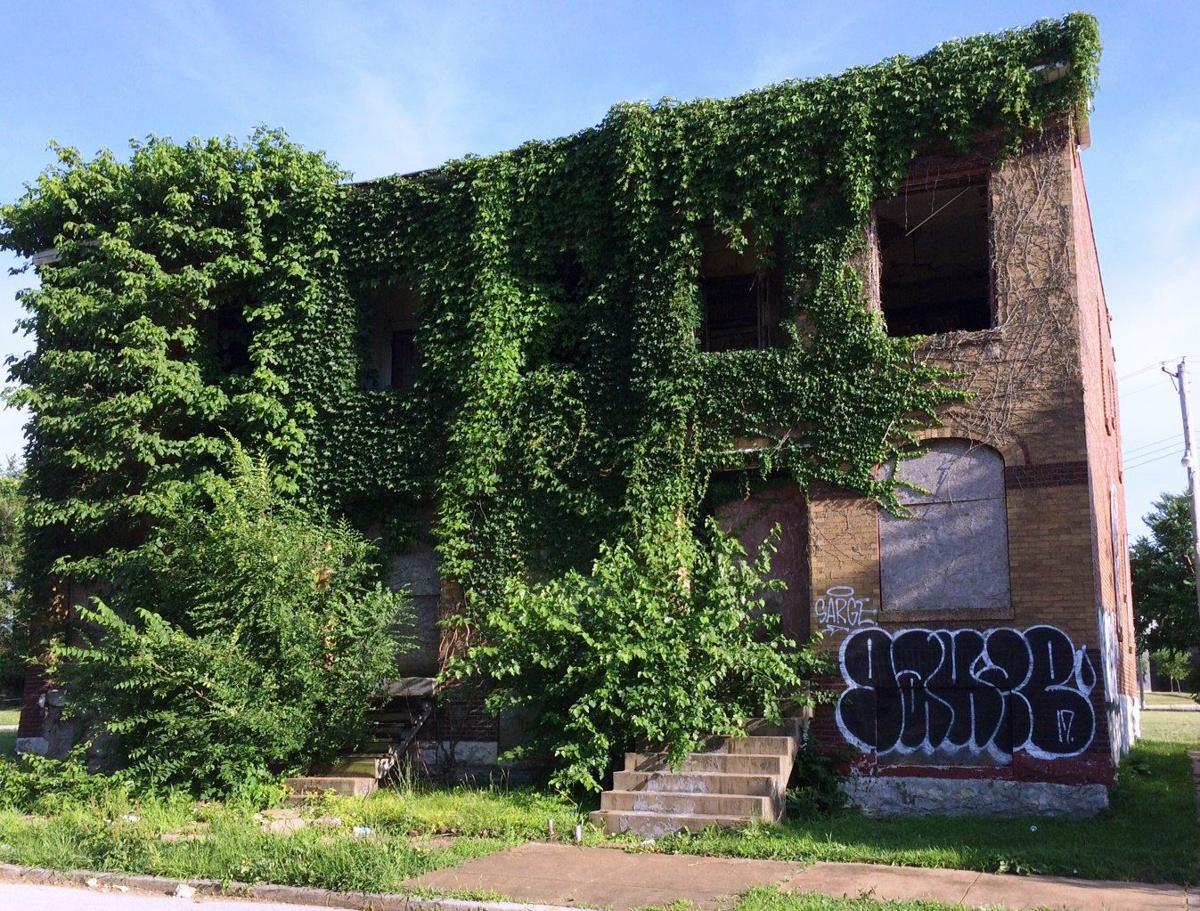 As of June 14, 2018, this eyesore vacant property at 3226 Magazine, in north St. Louis, was registered by the city as being owned by developer Paul McKee's Northside Regeneration LLC. 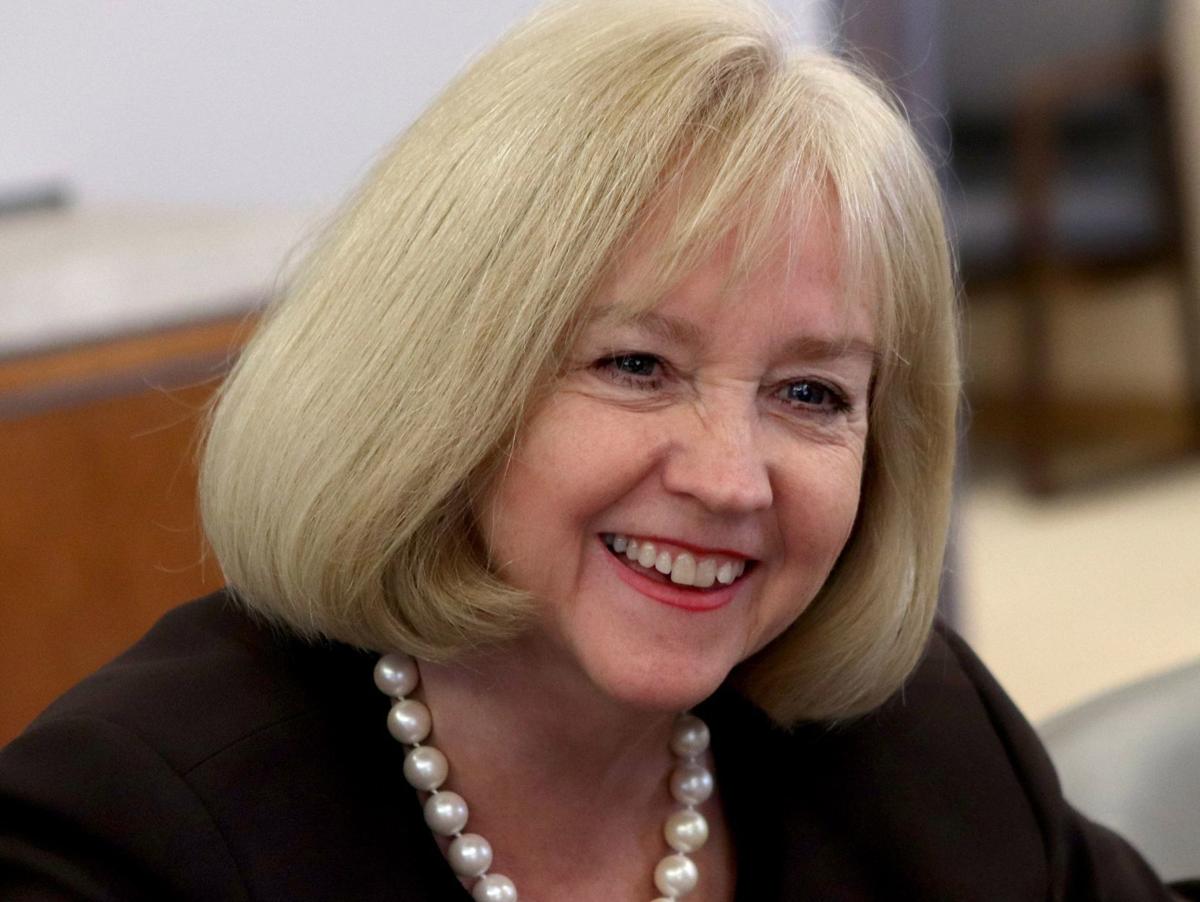