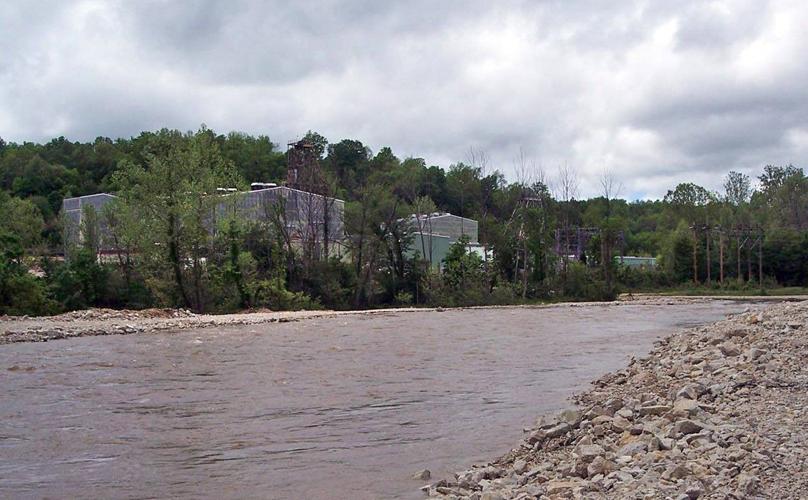 High water flows through the completed diversion channel of the West Fork Black River in May, 2015, next to the Doe Run facility near Bunker, Mo., in Reynolds County. Workers put a layer of limestone over the geotextile material that lines the ground. Photo courtesy of Dale Brooks. 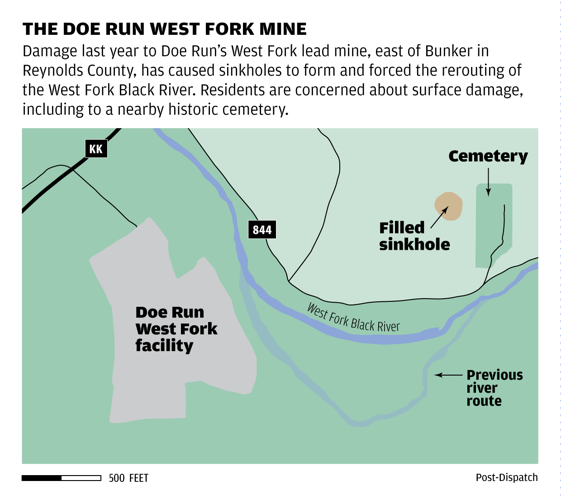 Last year, sinkholes began settling around the Doe Run Co.’s West Fork mine, and a sinkhole more than 100 feet wide opened near the historic West Fork Sutterfield Cemetery. The sinkhole near the cemetery opened again late last month, two neighbors of the mine said.

Doe Run’s two closest neighbors say the company has been slow to say what went wrong, and they believe the once-picturesque land will never return to normal — the effect of decades of mining in the region.

The Post-Dispatch reported in June on potential sinkhole causes. Residents and Doe Run said at the time that the company had been mining pillars, which supported the mine roof, before the sinkholes formed. But a company official wouldn’t say at the time whether removing the pillars was the exact cause.

Now a 30-page U.S. Mine Safety and Health Administration, or MSHA, report — obtained by the Post-Dispatch through a Freedom of Information Act request — provides insight into what went wrong there, and whether sinkholes will continue to form.

Tom Elmore, who lives on nearby land, blamed the sinkholes on either negligence, greed or some combination of the two.

“They got greedy, I guess,” on the Doe Run property, “and blew out a couple of pillars that stabilized that whole part of their operation,” Elmore told the Post-Dispatch in June. “When they did that, it caused the whole ground to start sinking. The sinkholes started.”

The report, dated Sept. 29, 2014, notes the unique topography that might have contributed to mine settling — a vulnerability company officials said they were unaware of before they decided to mine stabilizing pillars in the once-idle West Fork mine.

Mark Yingling, who heads Doe Run’s environmental, health and safety operations, said in a June interview that pillar extraction had gone on there before the collapses. Pillars support the structural integrity of mines, but they also contain ore.

Yingling said he didn’t know if taking out pillars caused the problems. “As far as this situation, I don’t know (if pillar extraction was the cause),” Yingling said. “It’s hard to say.”

The MSHA report lays out a timeline with a hypothesis on what went wrong. One thing is certain: The problems started after the company mined pillars.

The pillars were mined from a 300 by 500 foot area; the ground fall was almost the same size, according to the report. The report states that in the days after the ground fall, underground water started inundating the mine from an unused vent shaft that had cracked.

A handwritten note that was uncovered by MSHA mentioned a cave “several hundred feet long and 7 feet high” that was discovered near the shaft, presumably when it was being constructed by previous mine owners, according to the report.

MSHA officials met with company leaders on mine property soon after the sinkholes were reported. They toured the property, and Robert Seelke, MSHA’s Rolla, Mo., field office supervisor, issued an order to clear the area, determining that an “imminent hazard” existed to mine employees “due to enlargement of existing sinkholes or development of additional sinkholes.”

Government and company officials surmised that the ground fall where the pillars had been contributed to the vent shaft failure. The area’s karst topography — which naturally lends itself to sinkholes, anyway — was destabilized by the unleashed groundwater. The water eroded parts of the area’s soft soils, creating “voids in the residual soils overlying the cavities which collapse to create a surface sinkhole,” wrote Paul Donahue, the MSHA civil engineer who authored the report.

“This implies that the formation of additional sinkholes is possible in the vicinity of the ground fall and shaft liner breach,” Donahue said in a meeting with company officials on April 5. What followed throughout the summer, were, in fact, additional sinkholes.

The report was published on Sept. 19, 2014, and does state that the chances of new sinkholes would lessen as time went on.

Sinkholes continue to settle, Brooks said. The most noticeable is the 100-foot-wide one a stone’s throw away from West Fork Sutterfield Cemetery.

“They’ve filled that thing numerous times,” Brooks, a member of the cemetery board, said in early August. “It had sunk down about as deep as I have seen it. They just filled it recently, in the last week or two.”

Doe Run first noticed sinkholes in April 2014 and had to deal with another bout in June that year. That time, officials believed water from the West Fork Black River was inundating the mine.

The company applied to move the river away from its mine. Doe Run got a 16-month permit to divert, from the Army Corps of Engineers. They dug a channel, lined it with black geotextile material and filled it with rock.

Laurie Driver, a spokeswoman for the corps, said that Doe Run and the corps had been in talks to make the channel permanent but that nothing official had been filed.

Brooks is unsure how long the temporary channel can last. He said that water already entered the river’s natural path whenever it rains and that he worried what would happen if there were a major flood.

“The channel is going to fill up with gravel after a few floods,” Brooks said. “When you get a big flood, it’s going to go right into the old channel again. From there, the river flow might go underground. It might flow into a sinkhole. It’s anybody’s guess.”

He and Elmore say the company has had to repair parts of the new channel almost every time it rains. Dump trucks now traverse a part of the river that a year ago was home to the famed “Granddaddy” swimming hole.

The changes in the land continue to give Doe Run’s neighbors an uneasy feeling, but in a statement, and in updates to the Missouri Department of Natural Resources, the company notes only that “minor grading” has been necessary in recent months to fill its sinkholes.

Some residents are mobilizing against Nexgen Silica’s proposal, which they fear would tarnish the area by scattering wildlife, damaging water systems, and sending toxic dust into the air.

Damage last year to its West Fork mine caused sinkholes, forced rerouting of a river and threatened historic cemetery

Mine Safety and Health Administration report

High water flows through the completed diversion channel of the West Fork Black River in May, 2015, next to the Doe Run facility near Bunker, Mo., in Reynolds County. Workers put a layer of limestone over the geotextile material that lines the ground. Photo courtesy of Dale Brooks.