Same-sex marriage ruling in St. Louis leads to confusion across the state
0 comments
Share this
{{featured_button_text}}
1 of 3 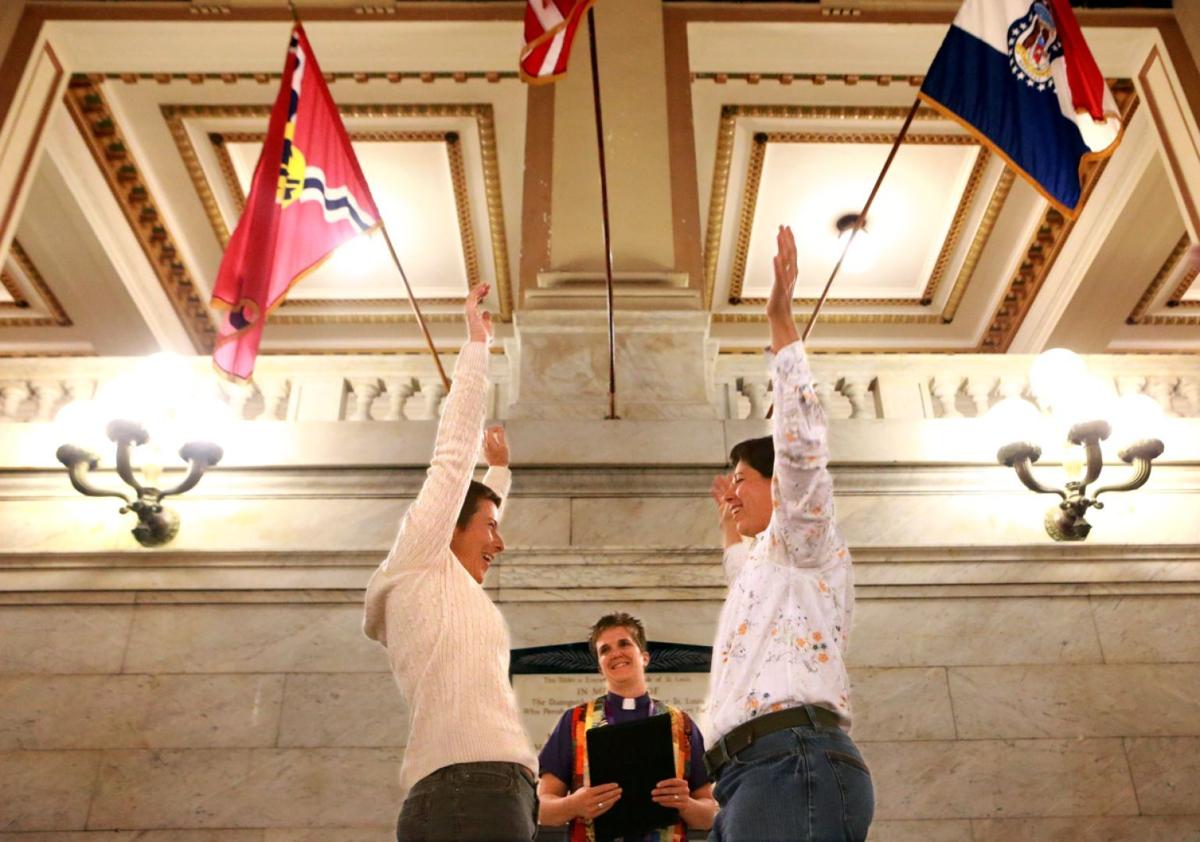 April Breeden (left) and Crystal Peairs (right) celebrate after renewing their vows with the Rev. Katie Hotze-Wilton on Wednesday, Nov. 5, 2014, in the St. Louis City Hall atrium. A judge declared a ban on issuing marriage licenses to same-sex couples unconstitutional and allowed the recorder of deeds office to begin issuing them again. The couple have been together for 19 years and were married in California in 2008. Photo by Christian Gooden, cgooden@post-dispatch.com 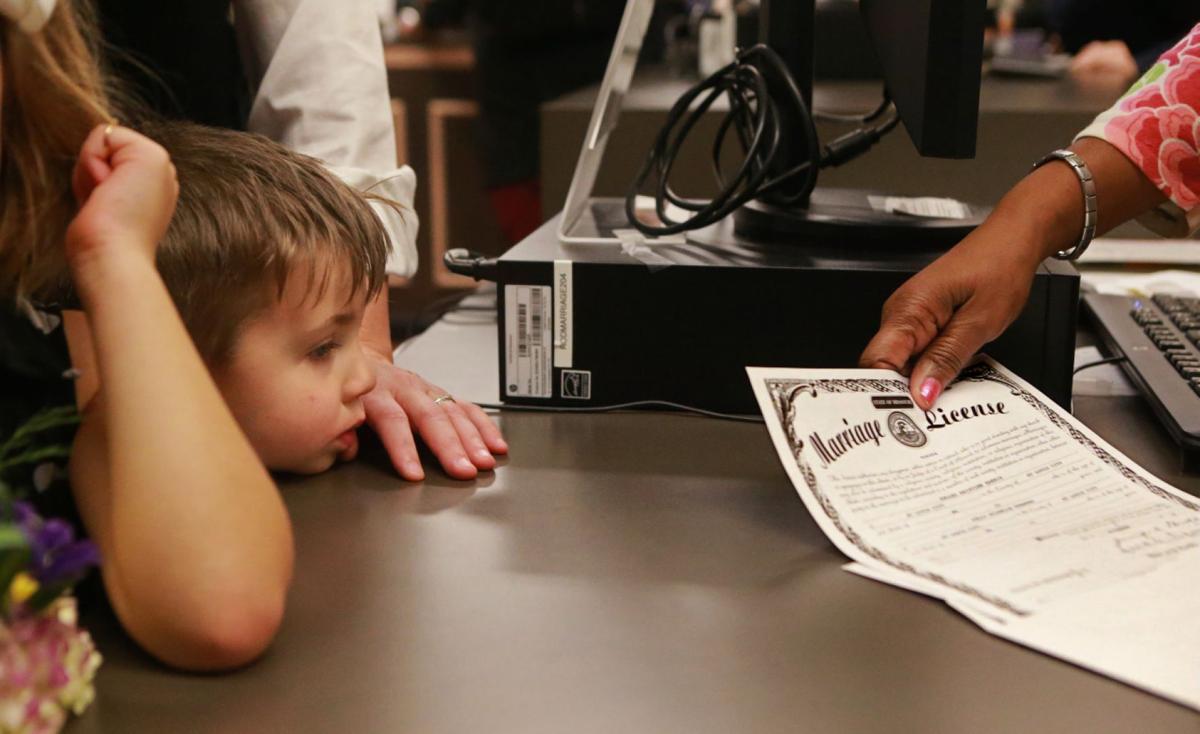 Cooper Harris, 4, of St. Louis looks at a marriage license that is being prepared for his parents, Kelly Barnard and Kelley Harris, on Wednesday, Nov. 5, 2014, by a clerk in the St. Louis Recorder of Deeds office. A judge on Wednesday declared the state ban on granting same-sex marriage licenses unconstitutional and allowed the city to resume issuing them. Christian Gooden, cgooden@post-dispatch.com 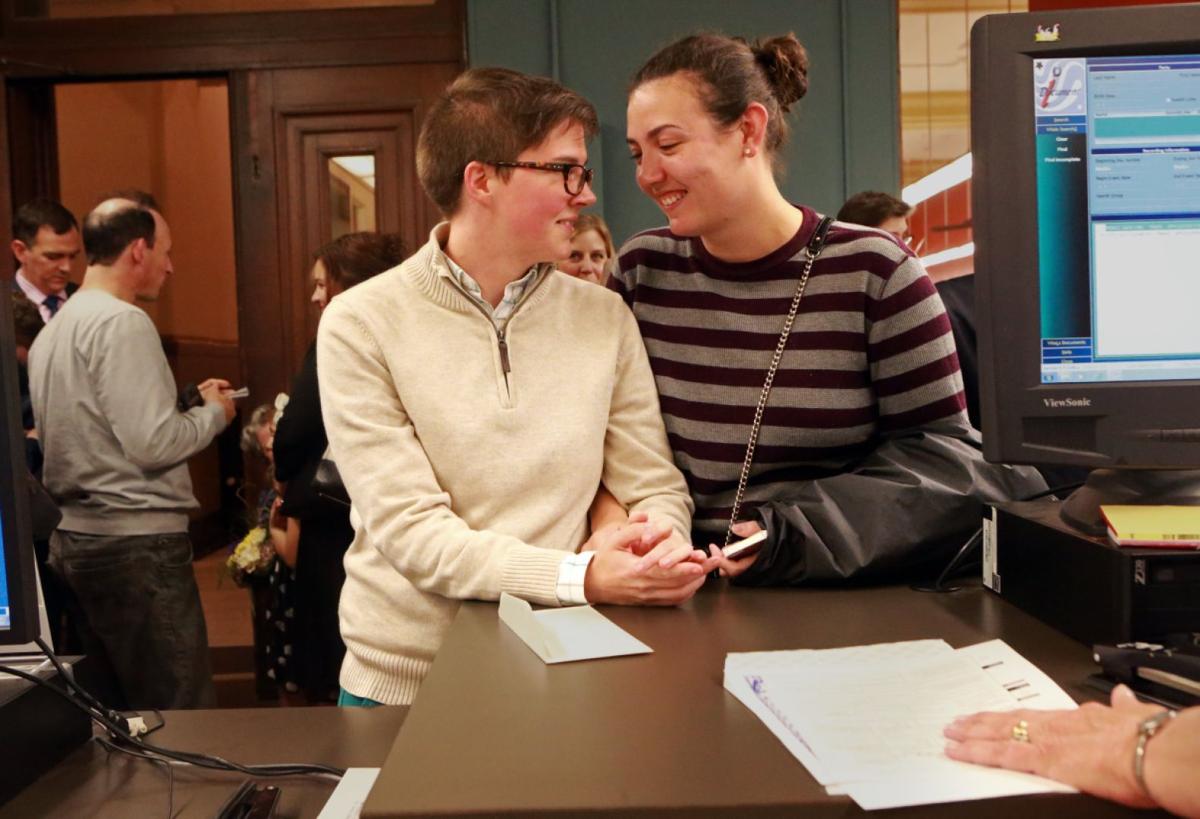 A St. Louis judge ruled Wednesday that the Missouri Constitution violates the rights of gay couples who want to marry. But whether that means marriage licenses can be issued across the state or only in St. Louis is up for debate, one likely headed for court.

The Recorders’ Association of Missouri is advising counties to hold off on issuing the licenses until an attorney for the organization issues an opinion. And many recorders of deeds across the state are waiting for the Missouri Supreme Court to weigh in — something not likely to happen until late next year.

“Having read the judgment, the way we’re looking at it is it is specific to St. Louis,” said Greene County Recorder of Deeds Cheryl Dawson. Until a ruling comes down from the Supreme Court, Dawson said her office will not be issuing marriage licenses to same-sex couples. She said Thursday afternoon that her office had received a few calls about the issue, but no same-sex couples came to the office seeking a license.

Jackson County also is holding off, awaiting a decision in a separate federal case that will determine whether that county has the legal authority to issue marriage licenses. Two couples denied licenses sued the county.

“We are looking forward to that guidance and will implement the directive of the court promptly,” said county counselor Stephen Nixon in a statement.

But St. Louis County has interpreted the ruling differently, and began issuing licenses Thursday morning, including one to Larry Mooney, a Missouri Court of Appeals judge. He and his partner, Dr. James D. Reid, have been together for 19 years.

As a judge, Mooney said Thursday, he cannot comment on pending cases. But Michael Wolff, dean of the law school of St. Louis University and a former chief justice of the Missouri Supreme Court, interprets the ruling as one that is valid statewide.

“The judgment was against the state of Missouri, so it would be applicable through the entire state,” Wolff said. Of course, he said, “another court could disagree.”

Six licenses were issued Thursday by St. Louis County, including one to Mike Schwartz and his partner, Randy Smith. They decided to get married on the spot after encountering a pair of Unitarian Universalist ministers stationed in the outer office of the St. Louis County Recorder of Deeds Thursday afternoon.

“I call this divine intervention,” said Smith, 59, a retired pharmaceutical industry worker. The couple have been together 20 years.

The Rev. Krista Taves, of the Emerson Unitarian Universalist Chapel in Chesterfield, and the Rev. Barbara Gadon, of the Eliot Unitarian Chapel in Kirkwood, had been waiting at the Recorder of Deeds for a little over an hour before they happened upon Smith and Schwartz.

“We decided to come out today because we’re pretty excited about the ruling,” Taves said.

St. Louis Circuit Judge Rex Burlison, who issued Wednesday’s ruling, did little to clear up the matter on Thursday. Through a spokesman, Burlison said his ruling was open to interpretation.

“His order does not make it black or white, either way,” said Thom Gross, a spokesman for the 22nd Circuit Court, which covers the city of St. Louis. “Judge Burlison’s jurisdiction is the city, but it’s clear, by St. Louis County’s example, that other jurisdictions may choose to take refuge that a state court has ruled on this. Other jurisdictions may choose not to be bound by this. That’s clear by the Jackson County example.”

The confusion lies at the end of Burlison’s 15-page order. In finding in favor of the city of St. Louis and its recorder of deeds, Jennifer Florida, Burlison declared the Missouri Constitution in violation of the equal protection and due process clauses of the 14th Amendment of the U.S. Constitution.

He continues by saying that the court “finds and declares that any same sex couple that satisfies all the requirements for marriage under Missouri law, other than being of different sexes, is legally entitled to a marriage license.”

He ends his ruling by saying that the court “finds and declares that defendant and any future recorder of deeds and vital records registrar of the city of St. Louis has the authority to issue marriage licenses to any same sex couple that satisfies all requirements for marriage under Missouri law, other than being of different sexes.”

It’s the last declaration that has set off the debate. Florida and city counselor Winston Calvert said that the city can issue licenses to any Missouri couple and is inviting those who do not want to wait until the dust settles to come to St. Louis City Hall.

“Regardless of what other counties do, everyone will be treated equally in the city of St. Louis,” Calvert said. Florida said 34 licenses were issued Thursday, after four on Wednesday afternoon.

The ruling by Burlison came more than four months after four couples were married at St. Louis City Hall despite a 10-year-old state constitutional amendment defining marriage as between one man and one woman.

Immediately after Burlison’s decision, Missouri Attorney General Chris Koster appealed the ruling to the Missouri Supreme Court, saying the case “must be presented to and resolved by the state’s highest court.” But Koster did not seek a stay. Koster supports same-sex marriage but said he had a legal responsibility to defend Missouri law.

Wednesday’s ruling was the second major victory in the state for same-sex marriage. Last month, a Kansas City judge ruled that marriages of Missouri gay couples wed in states or countries where such relationships are legally recognized must be honored by their home state.

A federal appellate court in Cincinnati overturned lower court decisions out of Tennessee, Kentucky, Ohio and Michigan, all of which found that denying marriage to gay couples is unconstitutional.

“This anomalous ruling won’t stand the test of time or appeal,” said Evan Wolfson, president of Freedom to Marry. He called on the U.S. Supreme Court to “swiftly take these cases, affirm the freedom to marry, and bring national resolution once and for all.”

Last month, the Supreme Court rejected appeals from five states seeking to preserve their bans. There are now 32 states plus the District of Columbia that issue marriage licenses to same-sex couples.

Steve Giegerich of the Post-Dispatch contributed to this report.

Judge oversteps his boundaries with ruling on gay marriage

I can't express my disgust and revulsion enough for St. Louis Circuit Judge Rex Burlison's ruling that gay marriage in Missouri is legal.

Consider an alternative version of a recent court ruling: "The court finds and declares that any (here insert category) couple that satisfies …

Another gay marriage victory in Missouri, as federal judge in Kansas City strikes down ban

He struck down the 2004 constitutional ban on same-sex marriage.

Reaction to same-sex marriage reflects our conservative resistance to change

Pope has affirmed that only male-female marriage is real marriage

The editorial "A rainbow of freedom" (Nov. 7) says, "Pope Francis has been moving toward a church embrace of gay and lesbian men and women of …

Ex-Christian Kerri Levine ("No moral high ground for opponents of gay marriage," Nov. 15) says she repented of her former opposition to same-s…

The case is now before the Missouri Supreme Court.

Ruling takes no position on broader questions of gay marriage in the state.

The state isn't party to the cases, but has similar legal fights brewing.

Judge rules that gay marriage ban in Missouri is unconstitutional

But the state attorney general has appealed the decision to the Missouri Supreme Court.

April Breeden (left) and Crystal Peairs (right) celebrate after renewing their vows with the Rev. Katie Hotze-Wilton on Wednesday, Nov. 5, 2014, in the St. Louis City Hall atrium. A judge declared a ban on issuing marriage licenses to same-sex couples unconstitutional and allowed the recorder of deeds office to begin issuing them again. The couple have been together for 19 years and were married in California in 2008. Photo by Christian Gooden, cgooden@post-dispatch.com

Cooper Harris, 4, of St. Louis looks at a marriage license that is being prepared for his parents, Kelly Barnard and Kelley Harris, on Wednesday, Nov. 5, 2014, by a clerk in the St. Louis Recorder of Deeds office. A judge on Wednesday declared the state ban on granting same-sex marriage licenses unconstitutional and allowed the city to resume issuing them. Christian Gooden, cgooden@post-dispatch.com