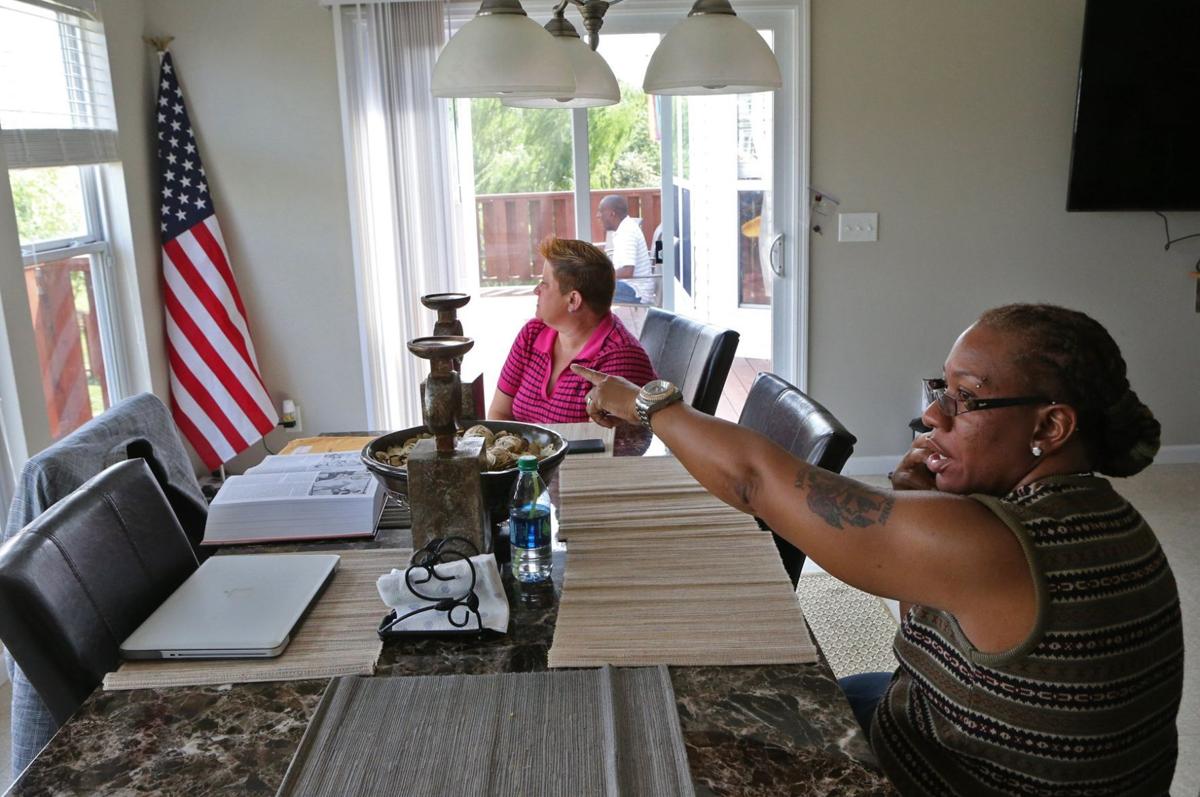 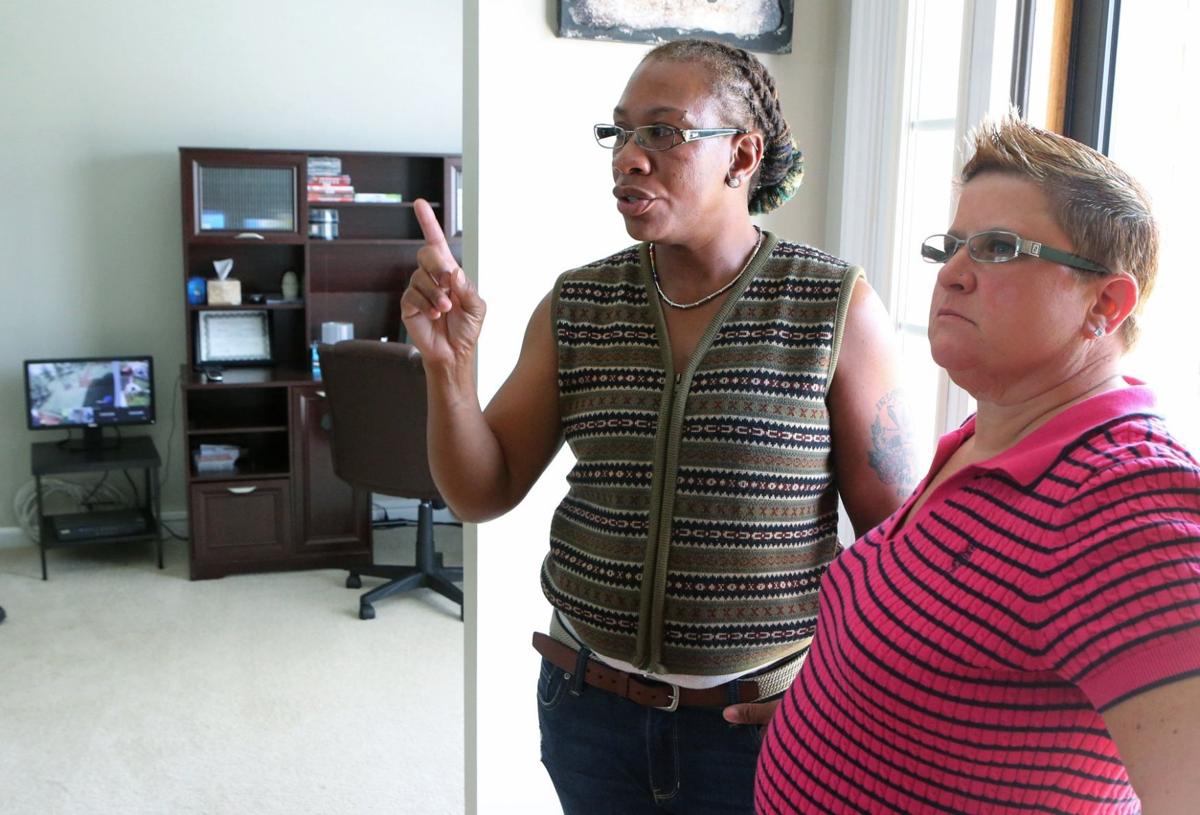 Maritha Hunter-Butler (left) and her partner, Melanie Anthony, talk on Sunday, Aug. 23, 2015, about how the police have come to their house in St. Charles County more than 20 times since they moved into their house in May. Photo by J.B. Forbes, jforbes@post-dispatch.com 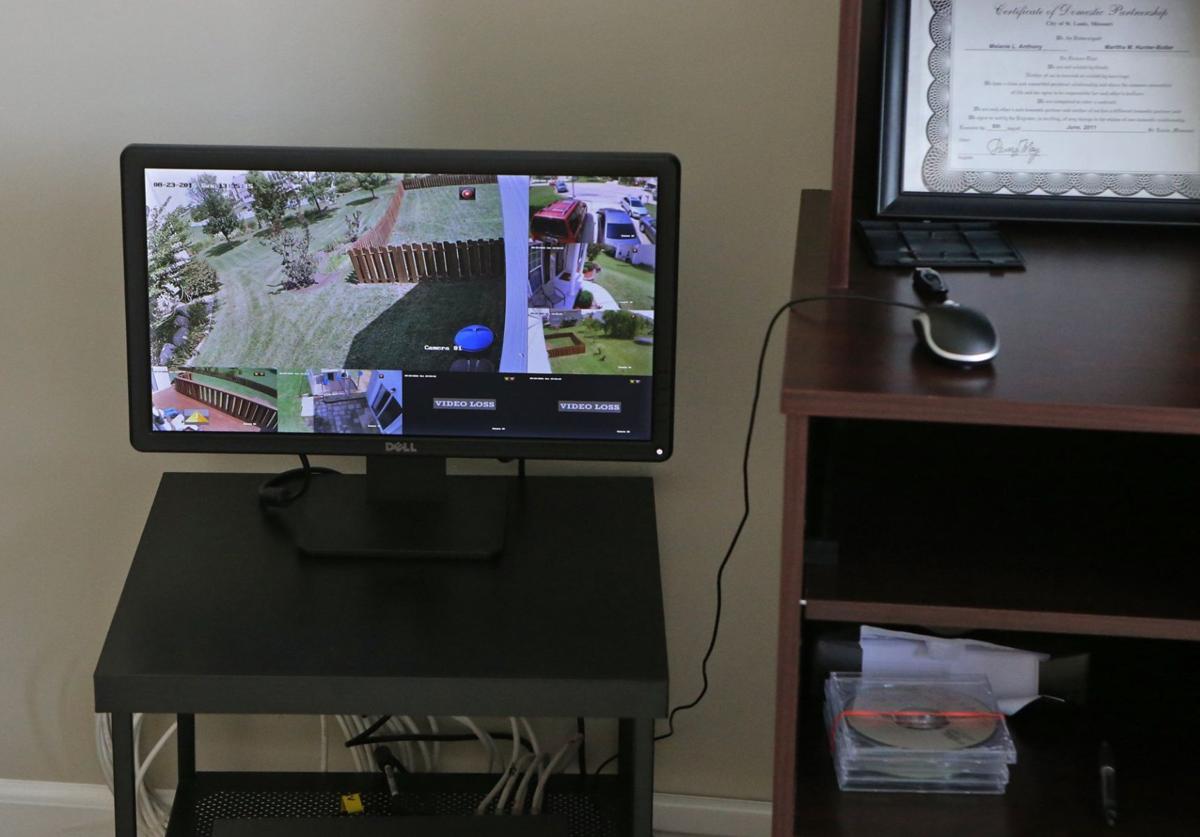 Maritha Hunter-Butler has a monitor in her den that records all of the surveillance cameras she had installed around her house in St. Charles County. Photo by J.B. Forbes, jforbes@post-dispatch.com 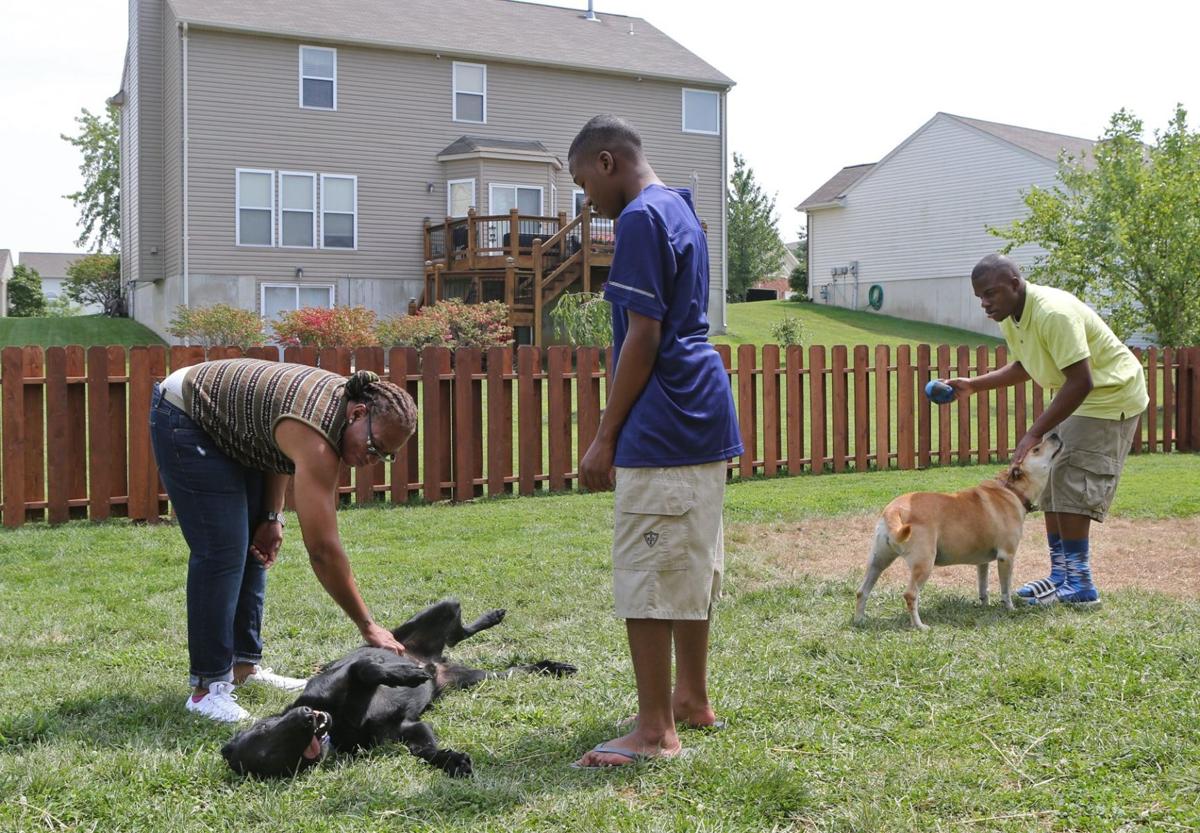 Maritha Hunter-Butler (left), 40, pets one of her four dogs, Action Jackson, on Sunday, Aug. 23, 2015, in the backyard of her home that she recently moved into in St. Charles County. Her son, Ahmir Butler, 15, watches while another son, Abdul Butler Jr., 18, plays with a dog named Goldie. The neighbors directly behind Hunter-Butler's house have called the police numerous times complaining about her barking dogs. Photo by J.B. Forbes, jforbes@post-dispatch.com

ST. CHARLES COUNTY • It remains unclear who started the dispute five months ago between the backyard neighbors in The Manors at Glen Brook subdivsion, but one thing is clear: It's not over.

This week, one of the neighbors was charged with sexual misconduct. Prosecutors claim that Melanie Anthony, 41, "exposed her genitals to her neighbors under circumstances in which she knew such conduct was likely to cause affront or alarm."

The misdemeanor charge is the latest criminal allegation lodged against Anthony and her partner, Maritha Hunter-Butler. The couple moved onto Brook Manor Court in May, along with Hunter-Butler's three sons. In August, Hunter-Butler was charged with assault for allegedly punching her backyard neighbor, Rebecca Scudder, in the face on July 1. That case is pending in court.

In the Anthony case, it's Scudder's husband, Jim, who notified police. The probable cause statement filed by police states that Anthony on Tuesday "knowingly knew children were present and could see her act, in which she exposed her bare vaginal (sic) and buttocks in a vulgar and public manner." The Scudder address on Glen Brook Court is listed as the place where the alleged incident happened.

Jim Scudder referred to Anthony's action as a "full moon" in a text message to a reporter. In a short phone call, he declined comment, saying it is now a police matter. Anthony and Hunter-Butler did not return voicemail messages.

The friction between the neighbors began almost immediately after the women moved in, and was detailed in a Post-Dispatch story in August.

The Scudders and other longtime neighbors of the subdivision off Highway N in an unincorporated part of western St. Charles County claim that Hunter-Butler's dogs bark at all hours of the night and that she has made threatening remarks to them.

Hunter-Butler said the neighbors have trumped up charges against her because she is black and in an interracial lesbian relationship. In an anonymous report made to police four days after Hunter-Butler and her family moved in, the caller mentioned several black male subjects “walking down the street with dogs and a couple of them are snapping pics of homes. Caller (advises) that this is an all-white neighborhood and they do not belong.”

After a police check, a notation was put into the report: “If caller calls back, (advise) them that a black family lives in the neighborhood.”

Hunter-Butler installed six cameras on the perimeter of her house, including some trained on her backyard neighbors. She said she did so after a string of calls to police and animal control were made by neighbors unhappy that her family has moved in.

At least 15 times, law enforcement officers have responded to Hunter-Butler's house, based on police records.  The calls were for reports of suspicious subjects, a dispute over property lines, peace disturbances, harassment and trespassing.

The tension was heightened when Hunter-Butler’s oldest son, Christopher Winston, invited Umar Lee, a regular Ferguson protester, to the house on Aug. 23 to put together a video outlining what Hunter-Butler says is the ongoing racial tension in the neighborhood. Police were called that day as well.

The backyard neighbors also have installed cameras. Jana Chamblee, next door neighbor to the Scudders, alleges that Winston tried to set off an explosive device in her backyard — something he says is not true.

“I’m scared to let my children in the backyard,” she told the Post-Dispatch in August. After Hunter-Butler moved in, the Chamblees planted seven trees to create a barrier between the two backyards. Hunter-Butler responded by putting up a fence.

The Chamblees and the Scudders have maintained throughout the months-long dispute that it began because of barking dogs that were not well cared for and has nothing to do with race or sexual orientation.

On May 11, two days after Hunter-Butler and her family moved in, animal control received a call from Rebecca Scudder stating that Hunter-Butler’s dogs were in a makeshift shelter that was too small and that they had been without food and water for up to 12 hours. Animal control reported the animals seemed well cared for.

Hunter-Butler told the animal control officer that a group of boys came into her backyard on May 10 and squirted the dogs with a water gun. In response, animal control called Rebecca Scudder, who asked her son about the incident. “I advised Scudder to make sure that her son knows that doing that will only aggravate the dogs,” the officer wrote in her report.

At one point, 14 petitions for orders of protection were filed from both sides of the fence. A judge dismissed all applications “for failure to state a cause of action.”

But the neighbors say they scored a victory when Hunter-Butler was charged in August with assault for allegedly punching Rebecca Scudder in the face on July 1.  According to Scudder, she walked to her back property line about 7:30 p.m. and confronted Hunter-Butler about her barking dogs.

“At that time words were exchanged between the two, and Maritha ended up hitting Rebecca in the face,” the police report states.

St. Charles County Police Officer Jacob Mendez said that when he arrived, Scudder had a “bloody nose, a severely swollen lip, and a bruise to the bridge of her nose.” He said Scudder was “very fearful of her neighbor because she was a ‘convicted felon.’”

In 2005, Hunter-Butler was charged in a murder-for-hire scheme. She tried to hire a cousin to kill her ex-husband, Abdul Butler. She was upset that he was behind in child support. Court records show that she offered a share of her ex-husband’s life insurance and a car as payment for the killing. The cousin went to police and the ex-husband was unharmed. Hunter-Butler was sentenced to six years for attempted murder, serving about half that time.

“I’ve made mistakes in the past,” Hunter-Butler said in the August Post-Dispatch story. “But I’m not a bad person.”

Regarding the alleged assault, Hunter-Butler told police she was not home when her neighbor claims the incident occurred.

“However when I asked her where she was she could not provide a response,” a police officer wrote in a report. Hunter-Butler also refused to supply surveillance footage from her camera that might have captured the incident.

The area could see wind gusts up to 80 mph and hail the size of a golf ball, according to the National Weather Service.

The 25-year-old victim was identified as Justin Beger.

Chesterfield plans to fix washed-out trails in Eberwein Park in stages through 2024.

The University City task force on renaming streets and parks has researched more than 200 names and divided them into three categories.

Maritha Hunter-Butler (left) and her partner, Melanie Anthony, talk on Sunday, Aug. 23, 2015, about how the police have come to their house in St. Charles County more than 20 times since they moved into their house in May. Photo by J.B. Forbes, jforbes@post-dispatch.com

Maritha Hunter-Butler has a monitor in her den that records all of the surveillance cameras she had installed around her house in St. Charles County. Photo by J.B. Forbes, jforbes@post-dispatch.com

Maritha Hunter-Butler (left), 40, pets one of her four dogs, Action Jackson, on Sunday, Aug. 23, 2015, in the backyard of her home that she recently moved into in St. Charles County. Her son, Ahmir Butler, 15, watches while another son, Abdul Butler Jr., 18, plays with a dog named Goldie. The neighbors directly behind Hunter-Butler's house have called the police numerous times complaining about her barking dogs. Photo by J.B. Forbes, jforbes@post-dispatch.com