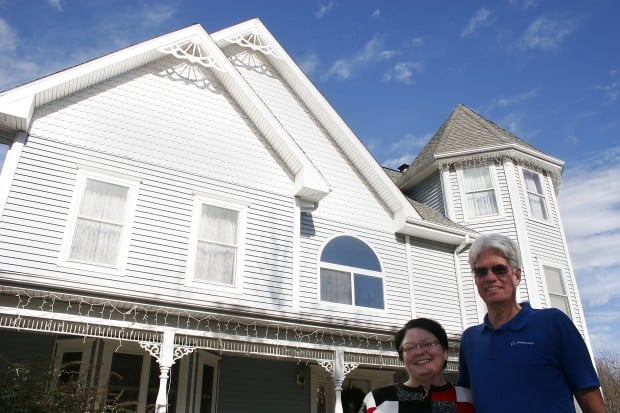 Jim and Frances Babb stand outside their Clarkson Valley home Saturday, Dec. 3, 2011. Photo by Garvey Scott, Special to the Post-Dispatch 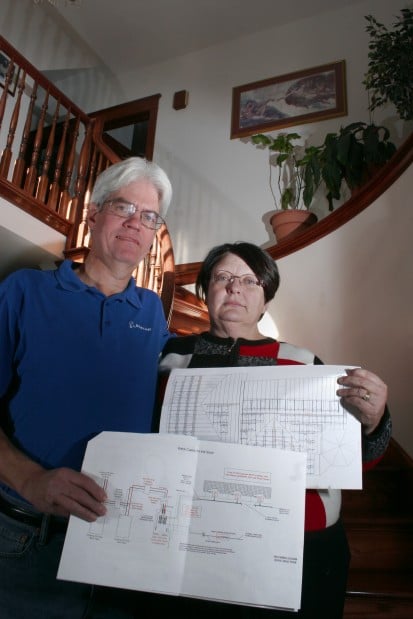 Jim and Frances Babb stand in their Clarkson Valley home on Saturday, Dec. 3, 2011, with copies of the schematic drawings that they submitted to the city in an effort to install a solar array for powering their house. Photo by Garvey Scott, Special to the Post-Dispatch

CLARKSON VALLEY • Jim and Frances Babb's home seems like an improbable site for a battle over solar energy.

It's a modern version of a Victorian Queen Anne with blue siding and gables covered with white fish-scale shingles. Ornamental rails decorate the front porch, and a lone turret rises above the surrounding woods.

Despite the atypical suburban architecture, the home is easy to miss.

It sits 360 feet back from a cul-de-sac and is mostly obscured by towering oak and sycamore trees.

"Most of the time, you don't even know the house is there," Frances Babb said.

Nonetheless, the city of Clarkson Valley is considering a bill today that, in the couple's view, "will take our desire to go solar and completely blitz it."

The proposed ordinance would ban solar panels on front roofs. The Babbs' home faces south, the optimal direction for collecting solar energy. They say they have no other place to install 1,760 square feet of solar panels to power their home.

City leaders say they are only trying to regulate the growing solar industry and adhere to good aesthetics principles.

But should a homeowner's access to solar energy ultimately be decided by something as fickle as taste?

Some states — such as Illinois — have recently passed laws to ensure communities can't unnecessarily restrict a homeowner's access to solar power. But Missouri leaves cities and homeowner associations to decide which solar projects are acceptable.

In February, city officials in Town and Country initially balked when Dr. Joseph Gira wanted a ground-mounted solar array to power his luxury home. A neighbor had complained that it would ruin the view in her backyard. The city's Board of Aldermen eventually approved the project after Gira agreed to screen it with trees.

Today, Gira's neighbor, Dr. Dorothy Cooke, said the panels still bother her — mostly because of the poles holding them up.

She said she wouldn't have minded had the panels been placed on Gira's roof.

Gira said the array has cut his electric bills in half. He plans to attend the Clarkson Valley meeting today and speak in support of the Babbs' project.

"It's the wave of the future," Gira said, adding that the proposed Clarkson Valley ordinance strikes him as strange in light of the fact that none of the Babbs' neighbors have complained.

Frontenac adopted an ordinance this year that said homeowners could place solar panels only on the back sides of their roofs. But over the summer, the city relented, allowing a couple to put panels on a side roof because it faced south.

Clayton also is considering a bill to prohibit roof panels that face the street. Clayton officials are collecting public comments about the new set of rules governing solar energy and plan to discuss them at a meeting in February.

"I personally don't think they are that obnoxious on the roof," said Susan Istenes, the city's director of planning and development services. "But I don't think communities as a whole, similar to Clayton, have accepted them."

Glueck said the proposed Clarkson Valley ordinance was one of the more restrictive he had seen. He called it 'shortsighted" because it would prohibit a significant portion of residents from using solar energy simply because of the direction their homes face.

When the Babbs were dating roughly 20 years ago, Frances Babb was living in a Victorian home in Kansas City that she didn't want to give up. Jim Babb promised to build her a better version if she moved to St. Louis.

Jim Babb, an engineer at Boeing, designed the house himself and incorporated all the features his wife loved about where she used to live — red oak floors, built-in bookcases and bay windows.

The couple built the home over five years but only started talking about installing solar panels earlier this year.

They say their desire to use less energy is economic, environmental and political.

"It bites my goat every time we put $50 or $100 in the gas tank, handing money to Arab countries that want to obliterate us," Frances Babb said.

Jim Babb plans on installing the solar panels himself. The projected cost: $66,000. With an Ameren rebate of $50,000 and a 30 percent federal tax credit, the Babbs estimate the panels would pay for themselves in a year and could lower their electric bill by as much as 90 percent.

The Babbs thought their greatest hurdle would be getting the panels approved by their trustees in the Kehrs Mill Estates subdivision. But that turned out to be easy.

Subdivision Chairman Arthur Ahrens said that, so far, residents have raised no concerns.

But when the Babbs applied last month to Clarkson Valley for a permit, city leaders immediately began to discuss regulating solar panels.

Douglass, Clarkson Valley's mayor, acknowledged the Babbs' dilemma with the position of their home, but he said a single household shouldn't dictate how the city crafts its rules.

"We have 950 houses besides the Babbs', " he said. "An ordinance has to try and cover all the stipulations that are best for its citizens."

However, Douglass said, the Babbs could apply for a special use permit to install the panels.

Still, the Babbs can't understand what all the fuss is about.

"Who cares if it's a glass panel or gray asphalt shingles" on the roof, Jim Babb said. "They shouldn't be telling me what I can have on my property."

Decision on solar panels is delayed in Clarkson Valley

Ordinance would ban homeowners from placing the panels on the front of their homes.

Soulard, a local and national historic district, does not allow visible solar panels.

Solar panels get relatively quick OK in Town and Country

TOWN AND COUNTRY • Unlike the eight-month odyssey of Town and Country's first solar panel application, a roof-mounted system in the Templeton …

Compromise is in works on Frontenac solar panel measure

Ameren Corp. reported a $285 million third-quarter profit compared with a loss a year earlier when it wrote down the value of some power plant…

U.S. solar firms' complaint against China gets OK to continue

WASHINGTON • A federal trade panel has found that imports from China harm or threaten to harm the U.S. solar panel industry. That means a comp…

Jim and Frances Babb of Clarkson Valley are a little closer to being able to install solar panels on their home.

Jim and Frances Babb stand outside their Clarkson Valley home Saturday, Dec. 3, 2011. Photo by Garvey Scott, Special to the Post-Dispatch

Jim and Frances Babb stand in their Clarkson Valley home on Saturday, Dec. 3, 2011, with copies of the schematic drawings that they submitted to the city in an effort to install a solar array for powering their house. Photo by Garvey Scott, Special to the Post-Dispatch