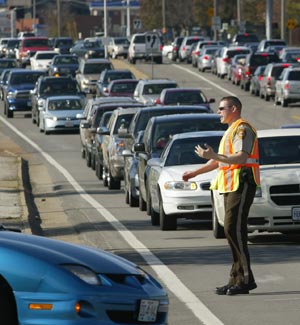 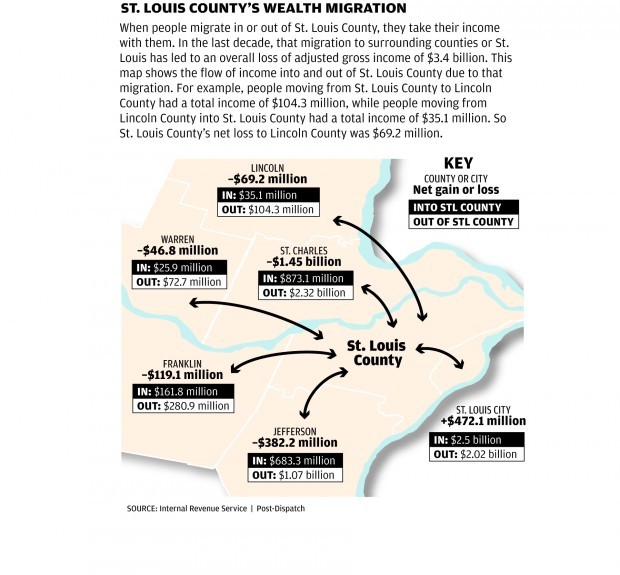 For the last decade, money has been leaving St. Louis County.

Internal Revenue Service figures show that not only have more people moved out of the county than moved in from 2001-2010, but those who left earned an average of $8,000 annually more than those who moved in.

As a result, St. Louis County lost $3.41 billion in resident income through migration.

In the city, that resulted in a net loss of $760 million in total resident adjusted gross income — assets (including investments) minus deductions.

But despite losing only 4,000 more people than the city, St. Louis County's income gap between in-migrants and out-migrants was more than four times that of the city.

The IRS tracks where people move and how much they earn by comparing their tax returns with those from the previous year. It excludes new immigrants and some elderly and poor who didn't file.

St. Louis County contrasts with other counties in the region, most of which gained people — and income — through migration, despite the decline in overall movement caused by the recession.

That doesn't mean all parts of St. Louis County have been affected by negative migration. U.S. Census data show that portions of the county, particularly western areas such as Chesterfield, Wildwood and Eureka, saw significant population growth from 2000 to 2010.

The neighborhoods hardest hit by departures are mostly concentrated in north St. Louis County, much of which experienced significant population decline during the last decade.

Some of the wealthiest people in the region live in the western part of the county, he said. Meanwhile, some areas closer to the city have older housing that a lot of new families might consider obsolete, he said.

"When you have large areas that are one type of housing and that housing isn't as desired anymore, the whole area suffers," Powers said.

Some of it went to other metro regions, such as the Dallas/Fort Worth and Phoenix areas, both of which received more people from St. Louis County than they sent to it.

But the negative flow of income can mostly be explained by the imbalance of people moving to and from counties on the outer ring of the metro region. From 2001-2010, 83,600 people moved from St. Louis County to St. Charles County, while only 35,900 went in the opposite direction. When Jefferson, Lincoln, Franklin and Warren counties are included, St. Louis County had a negative flow of 69,900 people and almost $2.1 billion in income with outer counties.

Some of that is probably a result of what has always drawn people farther out into the suburbs: large, new homes with lots of green space.

In February, Gina Juenger, 29, and her boyfriend left Maryland Heights and moved into a home in St. Charles County for those very reasons. Their four-bedroom home, which was built in 2004, sits on a 16,000-square-foot lot in a small subdivision.

For what they were willing to spend, they would have ended up with "a ranch that hasn't been updated since the '60s" if they chose to live in west St. Louis County, Juenger said.

"We were just looking for more house," she said. "And we could get more house and more land for our money if we went across the (Missouri) river."

Some of the movement out of St. Louis County might also be driven by job availability. The Bureau of Labor Statistics reports the number of jobs in St. Louis County fell by 13 percent from 2000 to 2010, compared with a 28 percent increase in St. Charles County.

Those who left St. Louis County were far more likely to be white than those moving in, according to census data. From 2000-2010, the county lost 78,882 whites, while the black population of the county grew by 39,723.

Historically, "push and pull" factors drive migration within a metro area, said Todd Swanstrom, a professor of public policy at the University of Missouri-St. Louis.

"People are being pulled to places by markets," he said. "That's what drew people to suburbs. People were attracted by larger, more modern homes with big yards."

With the foreclosure crisis rumbling along and the housing market still somewhat weak, "the pull is declining," he said. "That demographic that was driving sprawl and suburbanization is declining."

"Elements of urban decline are creeping into the suburbs," he said.

St. Louis County's negative migration flow peaked in 2004, when 7,332 more people moved out than moved in. As mobility throughout the region slowed during the recession, the number of people leaving the county subsided slightly, though more people still left than entered in 2010.

While migration out of St. Louis County has helped boost the population of St. Charles County, the number of overall people moving into St. Charles and other outlying counties has also dropped due to the recession.

The city, though its population is still shrinking, is the only area county that had a significant, steady inflow of new residents in recent years.

But as St. Louis County's arrivals struggled to keep pace with its departures, a steady stream of migrants from the city has been the one thing the county can most rely on. From 2001-2010, it picked up a net gain of 37,745 people and $472 million in resident income from the city.

Foreclosure and mortgage delinquency rates remained largely unchanged in St. Louis in March, with 4.94 percent of homeowners far behind on the…

The number of people in poverty has increased to 15.8 percent in Missouri and 15 percent in Illinois since 2008.

For decades, county-to-city migrants have done little to counter the unrelenting stream of people heading in the opposite direction.

The internal audit also located $129,000 in bond funds that had sat dormant for decades.