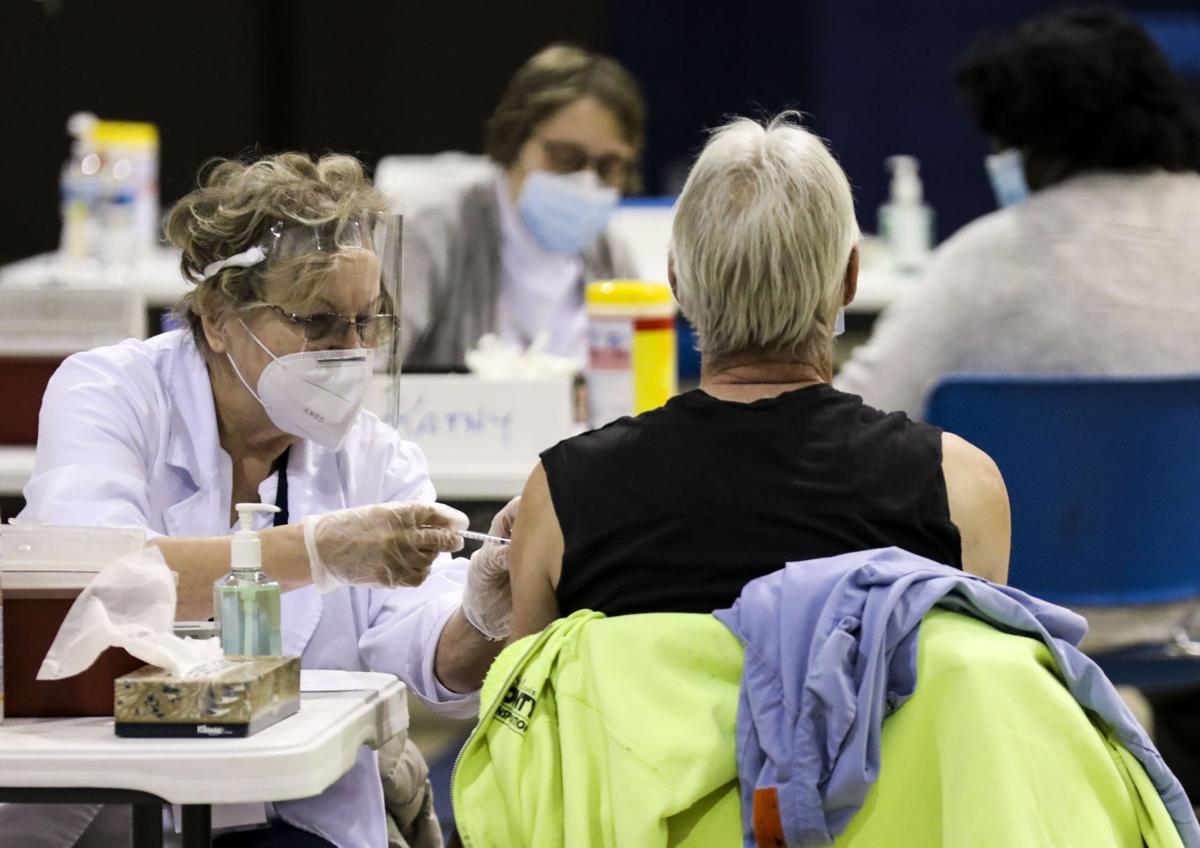 A woman administers a dose of the Pfizer vaccine at the county's first mass vaccination site on the St. Louis Community College at Florissant Valley campus on Tuesday, Feb. 2, 2021. To preregister and be alerted when a vaccine is available for you go to stlcorona.com. Photo by Colter Peterson, cpeterson@post-dispatch.com

Staff work to vaccinate people at the county's first mass vaccination site on the St. Louis Community College at Florissant Valley on Tuesday, Feb. 2, 2021. To sign up to receive updates on vaccinations in St. Louis County go to stlcorona.com. Photo by Colter Peterson, cpeterson@post-dispatch.com

Since Friday, fewer than 100 vaccinations have been administered at the site each day to eligible county employees, in preparation to ramp up to larger numbers this week. The first appointments for members of the public are scheduled for Wednesday.

The health department estimates that, given enough supply, between 500 and 1,000 people could be vaccinated per day at the Florissant Valley campus. But vaccine shipments have varied. The county has not received direct shipments from the state for the past two weeks, but received 3,900 doses of the Pfizer vaccine on Tuesday through a redistribution from a hospital.

County Executive Sam Page said Tuesday the number of doses will be limited for the foreseeable future.

“Availability of vaccine is going to be an issue for several months,” Page said.

That’s about a quarter of an estimated 21,000 vaccinations needed in St. Louis County each week to meet a federal benchmark to provide 100 million vaccinations in 100 days, Schmidt said. The remainder would be provided by hospitals, pharmacies and private clinics, she said.

Meanwhile, about 450,000 people who live in the county meet current eligibility requirements to get a vaccine, including about 12,000 health care workers and 5,000 first responders. More than 260,000 people have preregistered for appointments.

“Until the vaccine supply really comes in and is given to us, it will be difficult for us to meet some of these targets,” Schmidt said.

“We need some answers,” Clancy said. “It feels like we’re getting the short end of the stick here.”

The county is ramping up infrastructure to distribute vaccine as it becomes available, designating additional sites across the county for public vaccinations, including fire stations in Affton, Eureka and Mehlville that will begin administering vaccine on Thursday, Schmidt said.

The county is also planning mass public vaccination sites at the Meramec campus of St. Louis Community College in Kirkwood and at the public health department’s four health centers, as well as drive-thru and mobile vaccination sites.

Officials emphasized that vaccinations will be available only by appointment. Area residents can preregister through St. Louis County’s online portal, or by emailing the health department. Applicants will be invited to make an appointment once supply is available. Applicants do not need to be county residents.

The health department is encouraging residents to use the online or email options if possible, but those who do not have internet access can call the county hotline at 314-615-2660 on weekdays between 8 a.m. and 5 p.m. to preregister.

State officials on Tuesday also announced locations for the second round of mass vaccination events, which will take place across the state later this week in coordination with the Missouri National Guard. One event is scheduled for Thursday at the civic center in Farmington.

Appointments for Thursday’s event are already filled, according to the state vaccine website. Residents who want to be notified about future vaccination opportunities in St. Francois County can preregister through the county health center’s online portal. Applicants will be contacted by the health department when vaccinations are available.

Asked about reports that the city of St. Louis had vaccinated ineligible individuals last weekend, Dr. Fredrick Echols told a special committee of the Board of Aldermen that a key qualifying condition had changed after the city began accepting registrations.

Echols said the city’s COVID-19 vaccine registration website had originally listed a body mass index (BMI) greater than 30 as a qualifying condition to get the vaccine, but that the threshold set by the state was subsequently changed.

More than 13,000 people registered on the city’s site in less than 36 hours, said Jacob Long, a spokesman for Mayor Lyda Krewson. The next day, the state revised its guidelines to say only those with BMI over 40 qualified for vaccine, he said.

Long said the city was not going tell those who registered with a BMI over 30 as their only qualifying factor that they were no longer eligible. “We are not going to go back and take people off the list who signed up in good faith” based on the state criteria at the time, he said.

Some who received invitations to Saturday’s event told staff upon arrival that they didn’t meet any of the state’s current requirements, and those individuals were turned away, Echols told aldermen. Others, however, may not have understood the updated state requirements.

“We ask people to be honest to ensure that those at highest risk are able to receive the vaccine,” Echols said.

The state also reported 340 more deaths due to the virus, a record number, according to Post-Dispatch data. Of those, 11 occurred in November, 190 in December, and 138 in January.

The Illinois Department of Public Health reported 47 more deaths due to the virus.

The St. Louis Metropolitan Pandemic Task Force reported 51 new COVID-19 patients admitted to hospitals in the area, down from 59 the day before. The task force reported a total of 474 confirmed virus patients across area BJC HealthCare, Mercy, SSM Health and St. Luke’s Hospital facilities — down from a peak of 962 on Dec. 1. Task force data lags two days.

Michele Munz of the Post-Dispatch contributed to this report.

NOTE: On Oct. 11, Missouri announced that a database error had resulted in an “incorrect inflation” of cases in its October 10 report.

NOTE: Missouri updated its data dashboard on Sept. 28 to delete duplicate cases. This resulted in a decrease of total cases which caused the daily count to reflect a negative number.

Note from St. Louis Metropolitan Pandemic Task Force regarding the numbers for July 20: There was a delay in reporting some test results leading to the increase in reported hospital admissions.

Note from Missouri Department of Health and Senior Services: Note: Due to an abrupt change in data measures and the reporting platform issued by the White House on Monday, July 13, and effective Wednesday, July 15, Missouri Hospital Association (MHA) and the State of Missouri were unable to access hospitalization data during the transition. .

Note from Missouri Department of Health and Senior Services: The discrepancy in the number of deaths on July 19, 2020, was due a duplicate record being discovered by the Missouri DHSS.

Photos from the game circulated widely on social media, prompting calls to the school and the Archdiocese.

Faced with immediate deportation in 2017, he turned to the church for protection. He left sanctuary on Wednesday, citing a change in immigration policy under President Biden.

The Honduran immigrant and father has been living in sanctuary in a Maplewood church since 2017.

COVID-19 rates continue to decline in Missouri and Illinois

St. Louis County inmates find that chess, much like life, forces them to look a move ahead

Ladue Automotive operated for many years in a residential area, at 301 South Warson Road.

The city will be requesting addition of a pedestrian refuge island in the middle of South Kirkwood, near St. John Vianney High School

Town and Country aldermen could pay for private accounting firm, to counter petition for state audit

Former Alderman Lindsey Butler has been leading a petition drive for a state audit, including a review of city spending on the Town Square construction project.

The residents who have succeeded include a 27-year-old actress: “It was a huge weight off of my chest,” she said. “I mean, this has been a year of my life almost spent with this. So to know that it has paid off. It’s indescribable how relieving it is.”

A woman administers a dose of the Pfizer vaccine at the county's first mass vaccination site on the St. Louis Community College at Florissant Valley campus on Tuesday, Feb. 2, 2021. To preregister and be alerted when a vaccine is available for you go to stlcorona.com. Photo by Colter Peterson, cpeterson@post-dispatch.com

Staff work to vaccinate people at the county's first mass vaccination site on the St. Louis Community College at Florissant Valley on Tuesday, Feb. 2, 2021. To sign up to receive updates on vaccinations in St. Louis County go to stlcorona.com. Photo by Colter Peterson, cpeterson@post-dispatch.com