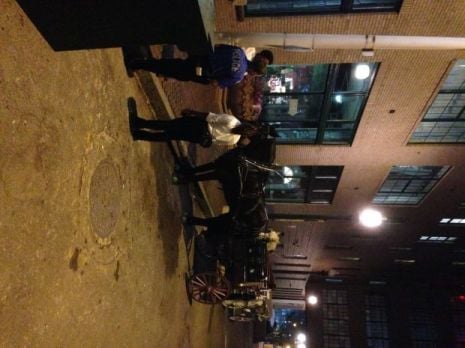 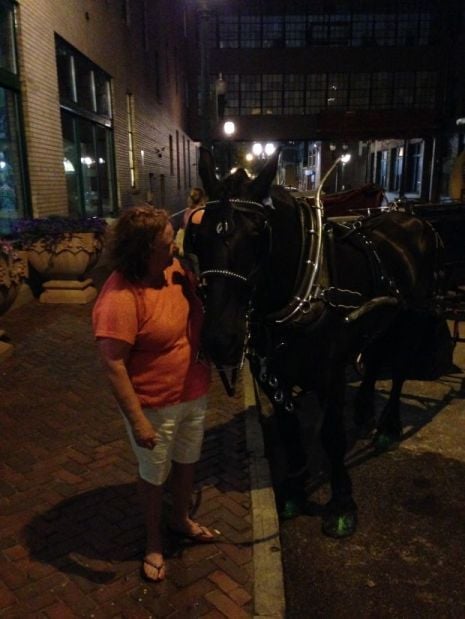 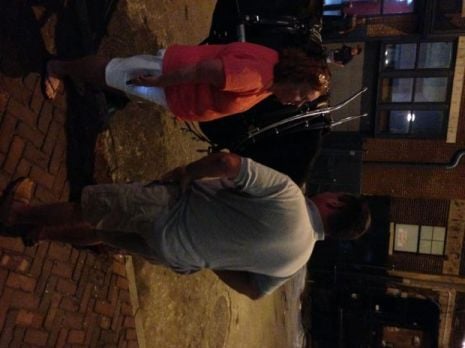 Walker’s vow followed an incident in front of the City Museum downtown on Saturday night. Walker, who lives in a building adjacent to the museum, was walking her dog just before 9 p.m. when she spotted what she said was a horse “showing classic signs of heatstroke.”

Walker said she stopped riders from boarding the carriage being pulled by that horse, Moose, and stopped another horse, Ben, both of whom are owned by carriage operator Brookdale Farms.

Police had already been called to the scene. The Humane Society and Animal Control arrived later, as did the head of Brookdale Farms, Jerry Kirk.

“This is ridiculous. He’s totally and completely fine,” Kirk said after arriving and checking on Moose and pronouncing him healthy and well-hydrated. Kirk would later tell a reporter that Moose was a “big, big horse” who had always breathed hard. He said that all his horses had regular veterinary care.

Kirk and Walker, each asserting their extensive knowledge of horses, could not agree on whether Moose was fit to keep working. They also disputed the high temperature for the day. They eventually agreed that Moose, who was breathing easily by then, would go back to Kirk’s Lombard Street warehouse for the rest of the night.

Walker said that carriage operators had agreed not to start operations until after 7 p.m. on the hottest days, and only work them for four hours. She said that Moose started his day at 1:30 p.m. His driver's log showed three 15-minute rides during that time, at 3:30, 5:30 and 7:30.

Later, Walker said Kirk asserted that the agreement only kicked in after three days of heat advisories.

Walker said that the health department had authority both over animals in distress and farm animals.

"I will ask for authority to ban them," she said after Moose walked toward home.

But she said if she fails to persuade city leaders to ban carriages, she would ask for an ordinance to make her authority clear.

She said that an employee would check on the welfare of all of the carriage horses Saturday night, and a veterinarian would visit both of Brookdale Farm stables in a day or two.

She plans to have all carriage horses in the city examined, starting Monday.

A veterinarian hired by the owner of Moose, the horse at the center of the growing controversy, gave the animal a clean bill of health on Monday.

Horses shouldn't labor in the heat to pull carriages

God bless Pamela Walker and Dr. Sarah Frei for stepping in to help Moose, the ailing horse who is forced to pull those loathsome carriages aro…

St. Louis 'not even close' to a decision on carriage rides

Health director to make a presentation to Mayor Francis Slay.

Walker's video of the horse she says had signs of heatstroke

Video of the horse, Moose, that Pamela R. Walker posted to her Facebook profile

ST. LOUIS • People who abuse animals often go on to commit crimes against people, officials say, which is why the police department is dedicat…

Children and staff in day care centers along with their families are at risk of contracting shigellosis, a bacterial infection that causes dia…

City says cost of compliance for St. Catherine of Siena will be modest.

Video showing the breathing of Moose, a Brookdale Farms horse

Video showing the breathing of Moose, a Brookdale Farms horse.