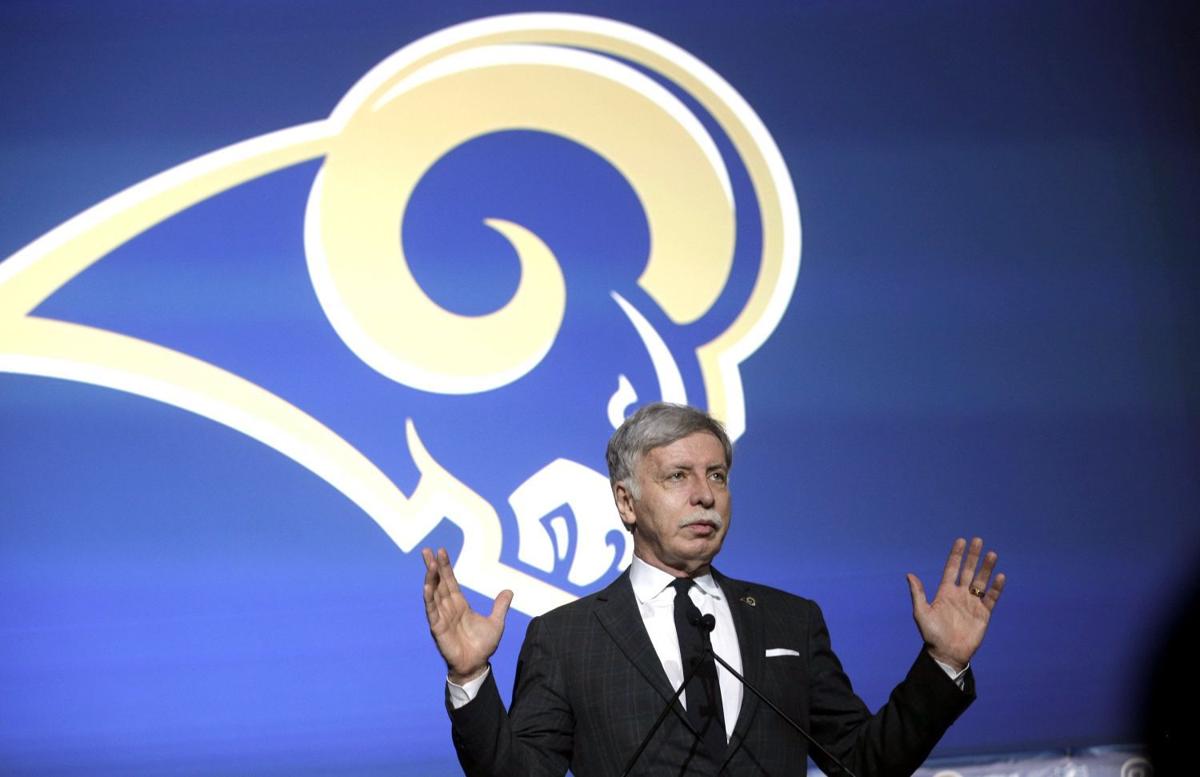 Stan Kroenke, owner of the St. Louis Rams, speaks during a news conference at the Forum in Inglewood, Calif., on Friday, Jan. 15, 2016, near the site of the team's future stadium. Kroenke and coach Jeff Fisher spoke about the return of the Rams to the Los Angeles area. (AP Photo/Nick Ut) 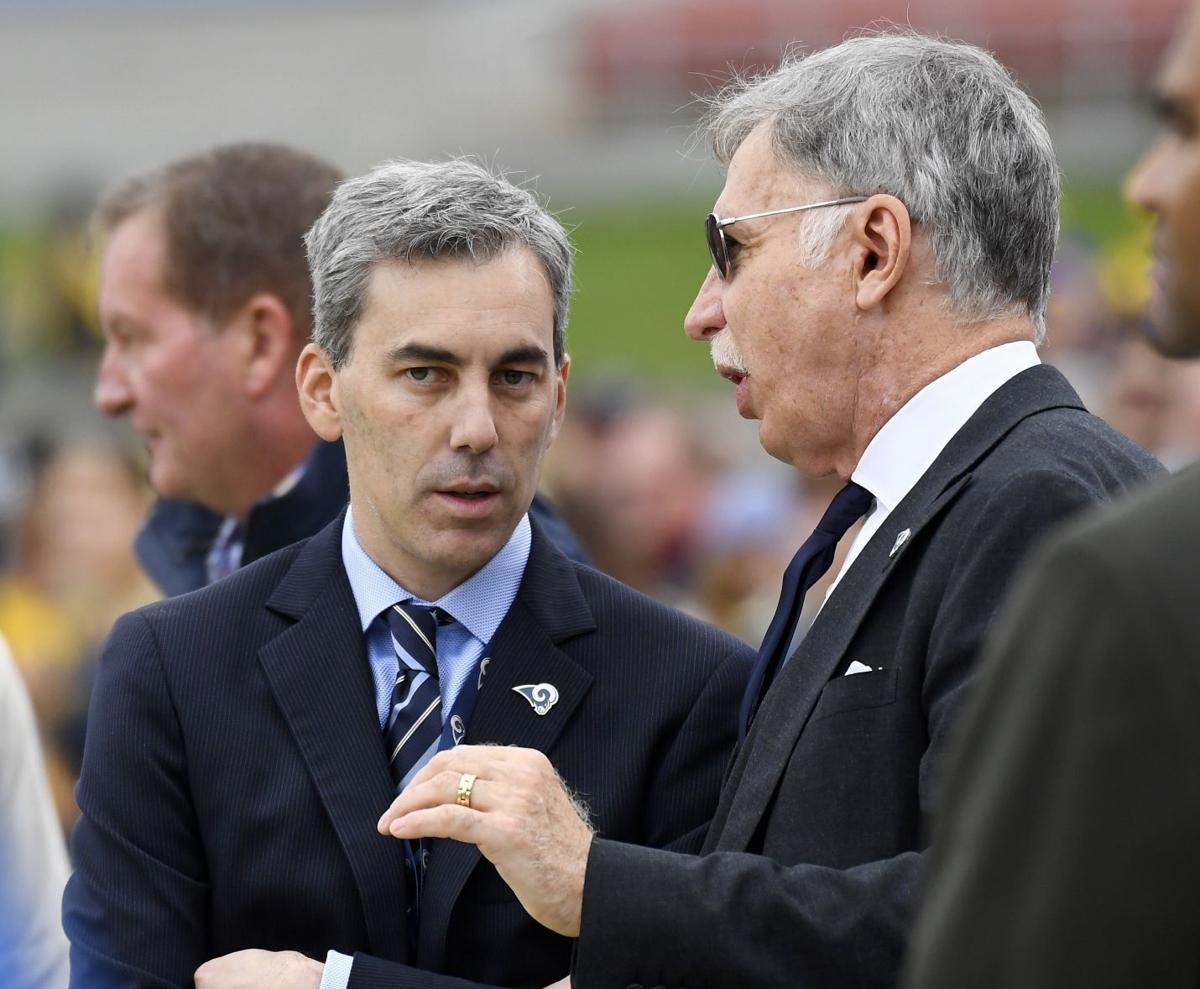 Rams owner Stan Kroenke (right) and chief operating officer Kevin Demoff (left) have been given notice that they are intended to be deposed in St. Louis' lawsuit about the team leaving town. (AP Photo)

St. Louis plaintiffs suing the Rams and National Football League over the team’s relocation to Los Angeles scored a victory in court Wednesday after a judge largely denied pretrial motions by the league and its member clubs.

St. Louis Circuit Court Judge Christopher McGraugh also denied motions to dismiss some 85 defendants, including all member teams and members of their ownership groups, for lack of jurisdiction. McGraugh also denied the Rams’ efforts to send the case to arbitration under the terms of the Dome lease between the team and the Regional Convention and Sports Complex Authority.

McGraugh did dismiss a count of fraud alleged against the other clubs and owners, but the NFL, the Rams and the team’s owners must still defend themselves against that claim. On that count alone, McGraugh said the plaintiffs lacked specificity when alleging against the other teams and owners.

The case alleging breach of contract and four other counts against the Rams and the NFL was filed in April by the city of St. Louis, St. Louis County and the Regional Convention and Sports Complex Authority. The public entities also allege fraud, illegal enrichment and interference in business that caused significant public financial loss.

The league and its members could now be forced to produce any number of private documents as part of the plaintiffs’ requests for discovery in the case, including communications and business information that would now be subject to public disclosure. That possibility could give the NFL and its teams incentive to settle with the regional public entities suing them.

“We look forward to receiving the discovery that was sent out months ago,” Bob Blitz, the lead attorney for the plaintiffs, said in an email.

Representatives for the defendants didn’t immediately provide comment, although a spokesman for the Rams previously said the team did not comment on pending litigation.

“This ruling is another step toward holding Stan Kroenke and the NFL accountable for conspiring to swindle the St. Louis area out of the NFL team we supported with our hearts and our tax dollars,” Stenger said.

Attorneys for the NFL said the plaintiffs couldn’t make a claim based on the league’s relocation policy because the policy did not amount to a binding contract and merely provided guidelines. McGraugh said that argument relied on “facts outside the pleadings beyond what the court may consider on a motion to dismiss.”

“Clearly, plaintiffs allege facts that give rise to a breach of an enforceable contract,” McGraugh wrote.

Rams attorneys sought to pull the case out of court and into arbitration under the terms of the Dome lease and a separate relocation agreement between the Rams and the public entities, but McGraugh said that could be done only when there was a dispute related to the terms of those agreements. The plaintiffs aren’t alleging those agreements were violated, rather that the NFL and its members violated their own policy.

“Even a ‘broad’ arbitration provision only covers disputes ‘arising out of’ the contract to arbitrate,” McGraugh wrote.

McGraugh also ruled that the out-of-state defendants met the criteria for being sued in Missouri, even though the team owners’ vote to move the Rams happened in Houston and they otherwise had little to no contact with Missouri entities. McGraugh said there was standing as long as the alleged out-of-state actions led to consequences in the state where the lawsuit was filed.

“This is a clear case of the Missouri long-arm statute operating to hold Defendants amenable to suit in Missouri for injuries they caused in Missouri,” McGraugh wrote.

Although the judge granted the defendants’ motion to dismiss the fraud claim against the out-of-state defendants and the Kansas City Chiefs, McGraugh gave the plaintiffs a 30-day window to file an amended complaint with more specific allegations of fraud against those defendants.

The suit claims St. Louis has lost an estimated $1.85 million to $3.5 million a year in amusement and ticket tax revenue with the 2016 return of the Rams to Los Angeles. It says the city also has lost about $7.5 million in property tax and $1.4 million in sales tax revenue, plus “millions” in earning taxes.

Although it doesn’t provide dollar amounts for St. Louis County, the suit says the county has lost out on hotel tax, property tax and sales tax revenue because of the departure of the Rams.

A public task force to keep the Rams in St. Louis with a new riverfront stadium spent more than $16 million on the failed effort.

In Sunday’s final regular-season game, the Rams paid homage to the team’s uniform from 1973-99, so in other words, to the most-recognizable jersey from Los Angeles yesteryear

Stan Kroenke, owner of the St. Louis Rams, speaks during a news conference at the Forum in Inglewood, Calif., on Friday, Jan. 15, 2016, near the site of the team's future stadium. Kroenke and coach Jeff Fisher spoke about the return of the Rams to the Los Angeles area. (AP Photo/Nick Ut)

Rams owner Stan Kroenke (right) and chief operating officer Kevin Demoff (left) have been given notice that they are intended to be deposed in St. Louis' lawsuit about the team leaving town. (AP Photo)