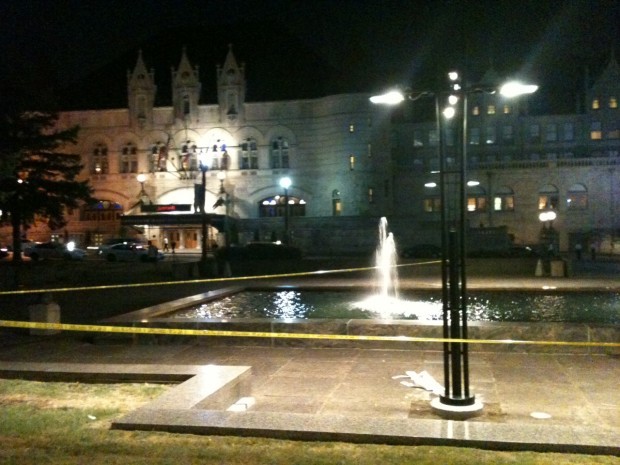 Crime scene tape cordons off an area near the fountain just north of Union Station after a fatal shooting. 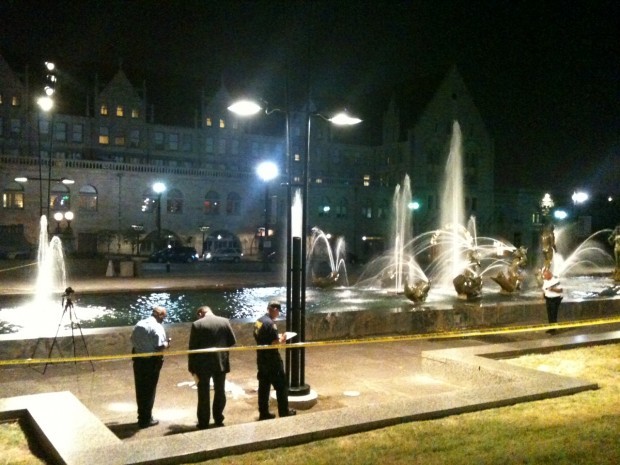 Police investigate a fatal shooting near the fountain just north of Union Station.

ST. LOUIS •  St. Louis homicide detectives were investigating after a man was shot in the head shortly before 10 tonight near Union Station.

The shooting happened near Market and 18th streets and followed a fatal one earlier tonight in the 5200 block of Highland Avenue.

Homicide detectives were called to both scenes, although it was unclear if the man shot near Union Station had died.

The earlier incident happened at about 6:50 p.m. Two people were shot, one in the arm and one in the stomach. One of the victims died, police said.

At the scene near Union Station, police responded to a call of shots fired and found a man, 25-35 years old, on the ground with a gunshot wound to the head. He was lying on the ground on the north side of The Meeting of the Waters Fountain in Aloe Plaza, just outside Union Station.  He was taken to a hospital.

Homicide detectives responded to the scene, and a commander said they initially had no witnesses and were gathering surveillance tapes from nearby buildings.

No other details about either shooting were immediately available.

Editor's note: The shooting near Union Station was initially reported to be a homicide. Police later would not confirm that the victim had died.

Expect snow in St. Louis this weekend. The early outlook says a few inches are possible

With temperatures set to drop below freezing, light rain is expected to quickly transition to snow on Friday.

As St. Louis’ historic buildings crumble, city eyes little-used powers some say can help save them

Funding, not legal authority, has been the real issue preventing a stronger response from City Hall when owners fail to maintain historic properties.

It’s the latest effort by Republicans to put roll back the expansion approved by voters in 2020.

Most of the ‘paper-only’ transactions that caught the government’s attention occurred in 2012 or earlier, outside the statute of limitations.

Sex trafficking reports and cases on the rise in Missouri, nationwide

The anti-trafficking group Polaris said the number of calls and cases has risen steadily in the two states and the nation over five years.

2021 was another year of near-record warmth in St. Louis and across the US

The country’s six warmest years on record have all fallen since 2012.

The initiative will provide money for housing, create an Afghan Chamber of Commerce, provide job training grants and recreation for Afghan children.

Woman killed by tractor-trailer in Foristell

The woman was a pedestrian.

Snowfall totals were on the low end of the forecast for the weekend.

Crime scene tape cordons off an area near the fountain just north of Union Station after a fatal shooting.

Police investigate a fatal shooting near the fountain just north of Union Station.