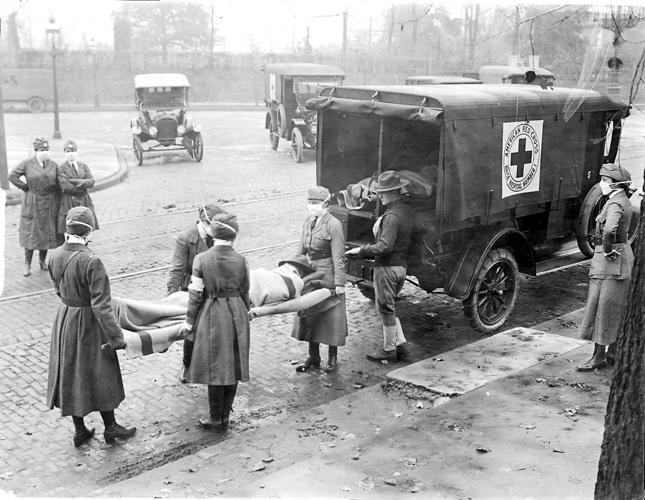 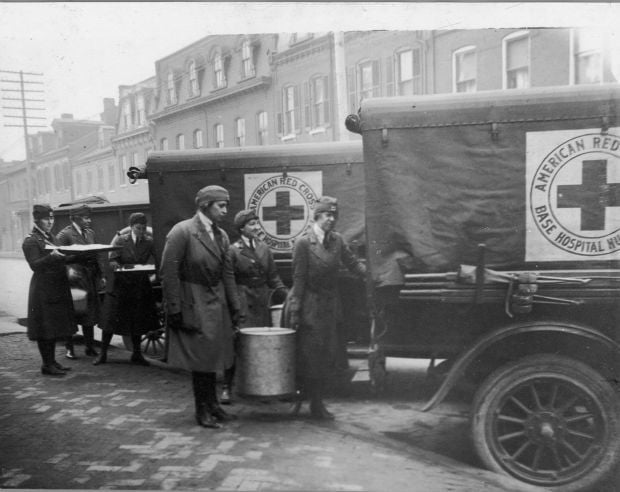 It started in a dusty and desolate corner of Kansas, as horror stories might.

The deadly influenza virus that would be known as the mother of all outbreaks tore through Haskell County in the winter of 1918. The county doctor warned that young, sturdy hog farmers were collapsing in the fields as if they’d been shot.

Historians believe that the flu soon reached Camp Funston at Fort Riley, where troops trained to fight World War I. By spring, flu outbreaks hit most of the Army camps across the country. Thousands of troops in effect carried germ warfare in their arsenal to European shores, and the pandemic took hold.

The particular strain of influenza was most aggressive in healthy people ages 20 to 40, possibly because their strong immune systems overreacted to the invading virus. The 1918 Spanish flu got its name after King Alfonso of Spain, 32, fell ill that May.

“It was working-age adults, people who were young and healthy suddenly getting sick and dying,” said Dr. Steven Lawrence, infectious disease specialist at Washington University. “It made for a devastating pandemic.”

When a second wave of flu hit the U.S. the next fall, St. Louis had the advantage of planning for disaster as East Coast cities were struck first. By late September, Jefferson Barracks went under quarantine as the first soldiers came down with the flu.

“In an epidemic, somebody has to have the authority to make those kinds of decisions that infringe on people’s rights,” said Pamela Walker, who was the city’s health director from 2007 to 2015. “He had been health director for long enough to know his city and how people interacted. He also had the public’s trust.”

“Most places in the country did not go that far,” Gordon said.

Theater owners, as some of the largest taxpayers at the time, protested the closures. Musicians and entertainers claimed the quarantine threatened their careers. Others were delighted — anti-alcohol leagues that were forming in the runup to Prohibition went on the lookout for taverns that violated the shutdown, Gordon said.

Within two days of the quarantine, eight soldiers at Jefferson Barracks were dead, another eight residents died at St. Louis City Hospital and the number of area flu cases topped 1,150.

With the flu continuing its rampage, Starkloff imposed a stricter quarantine in November, closing down all businesses with few exceptions including banks, newspapers, embalmers and coffin makers, according to Post-Dispatch archives.

The American Red Cross shifted from making bandages to face masks. Volunteers passed around blankets and vats of broth to flu sufferers. An ambulance waited at Union Station to take any sickly train passengers directly to the hospital upon arrival. Police officers and mail carriers wore masks on their daily routes.

Inside factories that couldn’t shut down during wartime production, doctors roamed the floors, watching workers for any signs of flu-like fever and cough.

Dr. Melvin Roblee, who died in 1995, remembered sleeping at the hospital during the epidemic: “We were in wooden barracks and we filled up Barnes Hospital with flu cases,” he recounted for an oral history project for Washington University.

The quarantine was temporarily lifted Nov. 18 but reinstated when the flu roared back in December. By Dec. 10 the flu peaked in the city with 60 deaths in one day. After illnesses declined sharply, the quarantine was lifted just after Christmas.

Thanks to the quarantine, St. Louis’ death rate was lowest among the 10 biggest cities at the time. In Philadelphia, where bodies piled up on sidewalks when the morgues overflowed, the death rate was nearly twice as high.

Rural areas in Missouri were not immune to the outbreak. Dr. J. Lee Harwell was one of a dozen doctors in Poplar Bluff at the time, said his grandson, Dr. Larry Harwell, 80, of University City.

“My grandfather’s stories of the epidemic were frightening,” Harwell said. “People would die in a waiting room.”

J. Lee Harwell and other doctors made house calls to the farms, collecting livestock as their payment. Many patients died in the buggies on the way back to town. Harwell said his grandfather’s diary entries for 1918 stopped at Nov. 15.

“The only entry on every page after that had only one word: FLU. There was none of his usual chatter, so I can only presume all hell broke loose and he was too tired to write anything else,” Harwell said.

At the end of its disastrous run, the Spanish flu of 1918 infected one-third of the world’s population and killed 50 million or more worldwide, including 675,000 Americans. In the last decade, the flu has caused 12,000 to 56,000 deaths in the U.S. each year, according to the Centers for Disease Control and Prevention.

By comparison, the flu season this year — which is considered very severe — is expected to infect close to 10 percent of the U.S. population.

Today, 100 years after one of history’s worst natural disasters, doctors have more tools to prevent and fight an outbreak — vaccines, anti-viral medicines and antibiotics for side effects such as bacterial pneumonia.

Still, experts believe the next pandemic is already lurking in a bird in China or a pig in Kansas, mutating on its path toward humans.

“Even though we are very prepared for it, we have to be careful to guard against being complacent,” Lawrence said. “We should be and must be vigilant.”

Editor’s note: Corrects the number of St. Louisans killed by the flu in 1918.

Public health interventions and epidemic intensity during the 1918 influenza pandemic

Messenger: Lessons on how to deal with a pandemic were forged in St. Louis in 1918

Social distancing is hard, but necessary, in face of fast-moving coronavirus.

STL's Andy Cohen reveals he has tested positive for coronavirus

TV host Cohen, in an Instagram post Friday, said: "After a few days of self-quarantine, and not feeling great, I have tested positive for coronvirus." 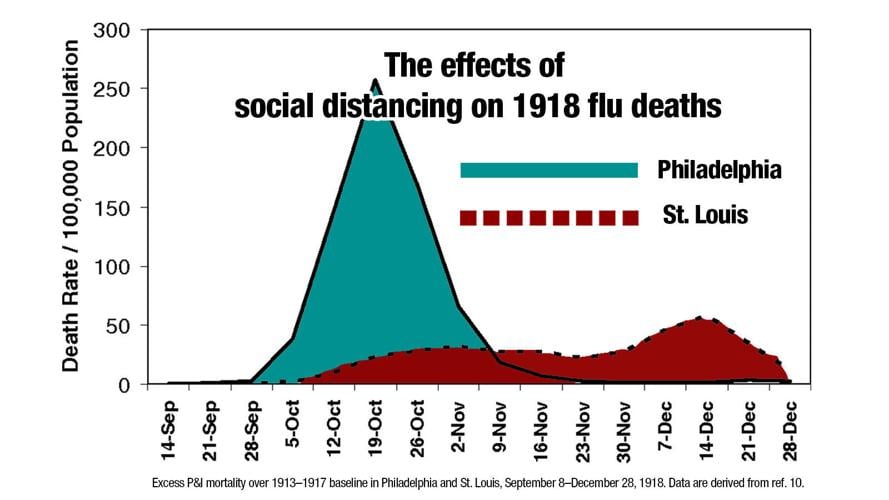 In some cases, outcomes during 1918 influenza pandemic appear to have correlated with the quality and timing of the public health response.

The contrast of mortality outcomes between Philadelphia and St. Louis is particularly striking.

The first cases of disease among civilians in Philadelphia were reported on September 17, 1918, but authorities downplayed their significance and allowed large public gatherings, notably a city-wide parade on September 28, 1918, to continue. School closures, bans on public gatherings, and other social distancing interventions were not implemented until October 3, when disease spread had already begun to overwhelm local medical and public health resources.

In contrast, the first cases of disease among civilians in St. Louis were reported on October 5, and authorities moved rapidly to introduce a broad series of measures designed to promote social distancing, implementing these on October 7.

The difference in response times between the two cities (≈14 days, when measured from the first reported cases) represents approximately three to five doubling times for an influenza epidemic.

The costs of this delay appear to have been significant; by the time Philadelphia responded, it faced an epidemic considerably larger than the epidemic St. Louis faced. 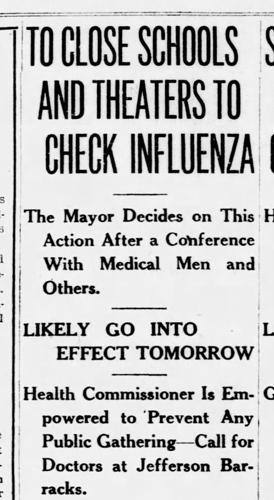 The city imposes a shutdown on public places to halt the spread of flu, October 1918, St. Louis Post-Dispatch. 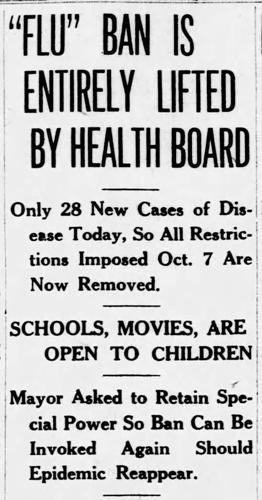 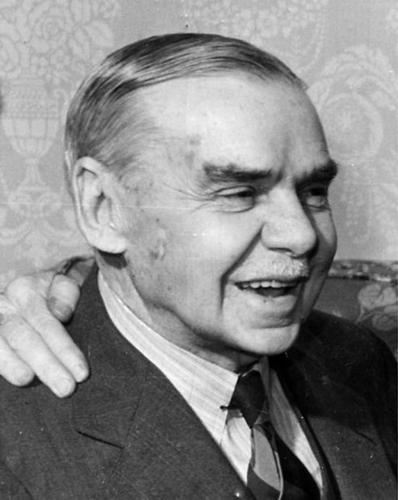