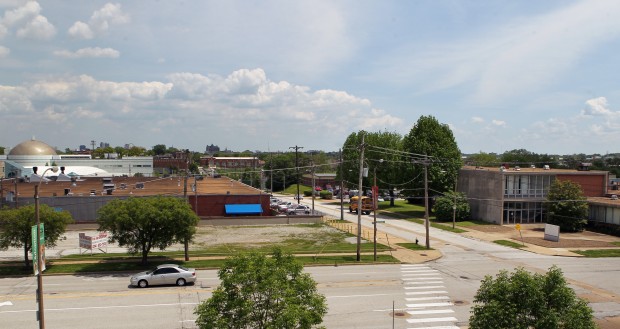 The St. Louis Science Center, visible at left rear, purchased property (right) at Macklind and Berthold avenues for $3.5 million in 2008. The Science Center sold part of the property to Paraquad for $1.7 million in 2013. Photo by Stephanie S. Cordle, scordle@post-dispatch.com 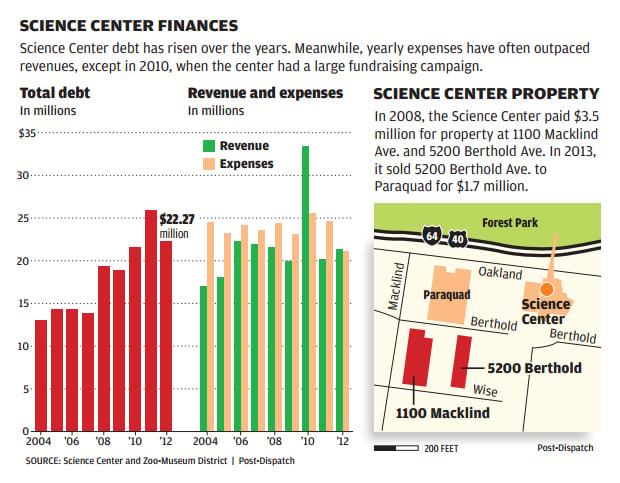 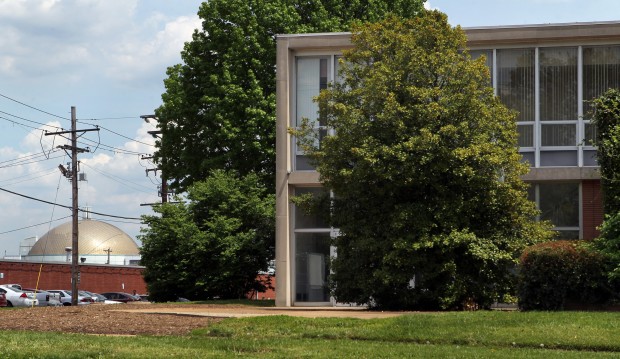 The St. Louis Science Center, visible at left, purchased property at 1100 Macklind Avenue (right) along with another property behind it for $3.5 million in 2008. Photo by Stephanie S. Cordle, scordle@post-dispatch.com 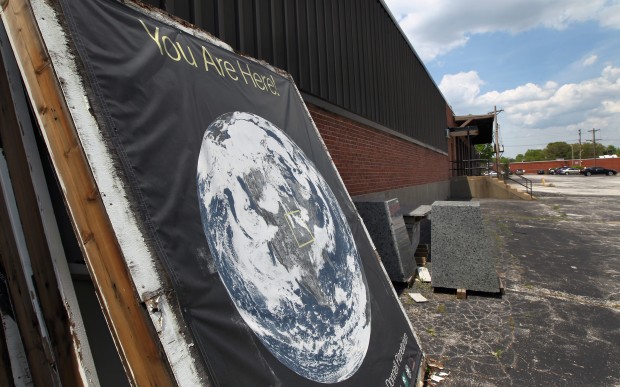 Banners from the St. Louis Science Center and James S. McDonnell Planetarium lean against the back side of a building the Science Center owns at 1100 Macklind Avenue in St. Louis, on Wednesday, May 8, 2013. in St. Louis. Photo by Stephanie S. Cordle, scordle@post-dispatch.com 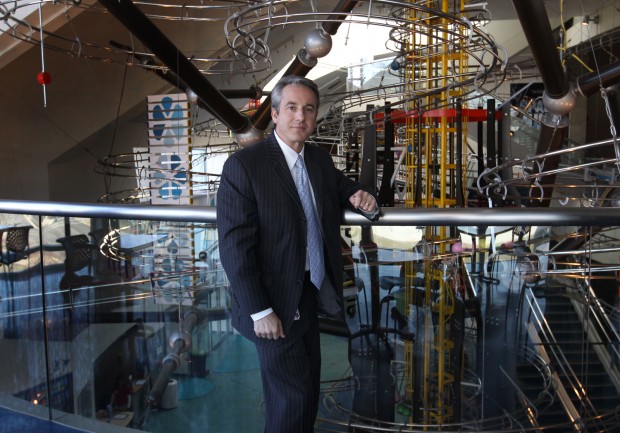 St. Louis Science Center President Bert Vescolani poses for a photo on Jan. 18, 2012, shortly after he took the helm of the organization. Photo by J.B. Forbes, jforbes@post-dispatch.com

ST. LOUIS • Leaders of the St. Louis Science Center dreamed of building a glass high-rise hotel on the Oakland Avenue campus. They envisioned a domed pavilion, a series of exhibit halls and an elevated plaza, the size of a football field, on stilts above the existing parking lot.

“It would have been visionary,” said the center’s chief fundraiser, G. Patrick Williams, of the $125 million campaign he termed “grandiose.”

None of that happened. Instead, the tax-supported Science Center built up more than $20 million in debt, largely over the past decade, driven by day-to-day expenses: pricey leases, expanded education programs and five-figure bonuses paid to a bevy of vice presidents.

One of the biggest expenses came five years ago, when the Science Center borrowed $3.4 million to buy land. It was meant for the future campus but so far has been nearly unused.

Now the center’s new leaders are trying to dig out. Over the past year, they’ve cut staff, canceled fundraising galas, trimmed back on expensive traveling exhibits, moved to freeze the employee pension program and, just days ago, sold a portion of the land bought in 2008.

The center and its second-year chief, Bert Vescolani, balanced the books last year. But they still have a lot of digging left. While the past administration took out loans for big ideas, Vescolani and his staff want to focus on run-of-the-mill maintenance and museum exhibits that have gathered dust.

They estimate they’ll need more than $10 million over the next three years for expenses such as roofing, lighting, paving and exhibit updates.

“If you don’t take into account maintenance, you’re kind of just kidding yourself,” said the finance chief, Barbara Boyle, who arrived more than two years ago.

The former chief executive, Doug King, rejects the claim that the Science Center struggled under his watch. He left in 2010 with a “great record over the years of growing the organization educationally and physically,” he said.

Decisions not to save money for building improvements weren’t his alone, he said. “That’s the way we were instructed to do things” by the board, he said.

The Science Center gets $10 million a year, about half its budget, in tax dollars from the Zoo-Museum District. Two years ago, it came under fire after Post-Dispatch stories about bonuses and six-figure salaries to nine vice presidents.

But that was only one in a series of financial issues.

To cover the spending, executives took on debt through loans on the center’s line-of-credit — every year for the last 10. At the same time, they were financing or refinancing improvements and expansions with public bonds, juggling another $14 million in debt.

But until 2008, the Science Center was paying off its line-of-credit at the end of every year. Then, in 2008, it bought six acres and two buildings owned by Koch Air, an Indiana heating and air conditioning distributor, just southwest of the giant quilted Exploradome, for $3.5 million.

Ted Hellman, board chairman at the time, pointed out that the property appraised for more than $5 million — “a stellar deal,” locking up prime real estate next door, he said.

But to pay for the land, the center extended its line of credit with US Bank. At the end of the 2008, it still owed $6 million on the line.

Hellman, however, says the financial difficulties stemmed from the economy’s crash, not from expenses. Still, Science Center officials didn’t stop thinking big. At a November 2008 board meeting, King cautioned the economic downturn would likely lead to contributions “well below objectives,” according to meeting minutes. And then the board discussed building a complex around the Science Center with a footprint the size of Chicago’s Millennium Park.

King, who left to lead Seattle’s Museum of Flight in late 2010, insisted there was no financial crisis at the center during his tenure.

King said he worried more about cash flow than statements of revenue and expenditures. He showed the board financial statements every year. And the center had enough cash to “keep exhibits and buildings up-to-date.”

His last year, he said, was a great year. The center’s finances finished in the black.

“I thought I left on good terms,” King said. “We were in a strong financial position.”

During his tenure, he noted, the organization “became one of leading science centers in the country.”

Officials at the Zoo-Museum District, which oversees the $70 million in tax dollars sent to five regional cultural institutions, have grown increasingly concerned about the Science Center’s finances.

No other Zoo-Museum District institution has spent money the way the Science Center has, district officials say.

Certainly, each has had rough years. In 2008, for example, the St. Louis Zoo paid off some bonds and lost money during the stock market crash, ending the year about $3 million in the red, according to its financial statements.

But the next year, zoo operations made nearly $7 million and the stock market bounced back.

At the Science Center, board members are now rethinking some of the museum’s past practices.

It was difficult to see the breadth of the problem as it was happening, said current board chairman and former Laclede Gas President Doug Yaeger.

“Each year, we’d look at the next year’s budget, and it’d look good,” Yaeger said.

It wasn’t until after the year was completed, or at least well underway, that dips and deficits became apparent, he said.

In July 2011, the board held a private retreat. There, it moved to cut in half the number of vice presidents.

It boosted oversight of expenses. It directed management to stop summarizing finances and instead “begin reporting all financial results in a standard profit-and-loss and balance-sheet formats,” according to minutes from the retreat.

Board members also began to question the benefit of some traveling exhibits. The 2011 “Body Worlds” show, for instance, kept 70 percent of the profits, the minutes show.

“We’re not doing that again,” Yaeger said this week.

“Or it better be a damn good one.”

Two weeks ago, the center sold a third of the Koch Air site for $1.7 million to neighboring Paraquad Inc., making back half of the original purchase price.

Vescolani, 48, arrived last winter with experience as a science teacher and a career at the Shedd Aquarium in Chicago and the John Ball Zoo in Grand Rapids, Mich.

Vescolani says he quickly realized two things. First, with $10 million in tax money every year and a consistent set of donors, the museum’s financial problems weren’t in revenue. They were in expenses.

And, second, the museum itself had been neglected. “There were some exhibits that were really getting tired,” Vescolani said.

Vescolani now has plans. They’re not big plans, like the past. Instead, he envisions a slow, steady improvement of each museum exhibit, and slow, measured growth.

The giant white Exploradome, for instance, is stained and deflating. The Science Center plans to tear it down as soon as this summer, saving at least $200,000 a year in heating and cooling costs.

In its place, Vescolani imagines a plaza, with new outdoor exhibits, an interactive farm and local artwork.

And Vescolani looks forward to an end of discussions regarding the past.

“I want to move on and get things done," he said.

Editor's note: Science Center debt grew to more than $20 million over the past decade. An earlier version of this story was unclear.

Budget has been balanced and debt reduced, officials say.

From parades to concerts, how St. Louis' museums count attendance

Cultural institutions have no uniform way of counting how many people walk through their doors.

Dome cost $200,000 a year in heating, cooling and inflation. Leaders aim to put farm exhibit in its place.

ST. LOUIS • The St. Louis Art Museum is now in the hot seat.

Cars, housing and hefty retirement plans are among the add-ons to rising salaries.

Al Wiman, managing director of community engagement, leaving. Position will not be filled.

The St. Louis Science Center, visible at left rear, purchased property (right) at Macklind and Berthold avenues for $3.5 million in 2008. The Science Center sold part of the property to Paraquad for $1.7 million in 2013. Photo by Stephanie S. Cordle, scordle@post-dispatch.com

The St. Louis Science Center, visible at left, purchased property at 1100 Macklind Avenue (right) along with another property behind it for $3.5 million in 2008. Photo by Stephanie S. Cordle, scordle@post-dispatch.com

Banners from the St. Louis Science Center and James S. McDonnell Planetarium lean against the back side of a building the Science Center owns at 1100 Macklind Avenue in St. Louis, on Wednesday, May 8, 2013. in St. Louis. Photo by Stephanie S. Cordle, scordle@post-dispatch.com

St. Louis Science Center President Bert Vescolani poses for a photo on Jan. 18, 2012, shortly after he took the helm of the organization. Photo by J.B. Forbes, jforbes@post-dispatch.com