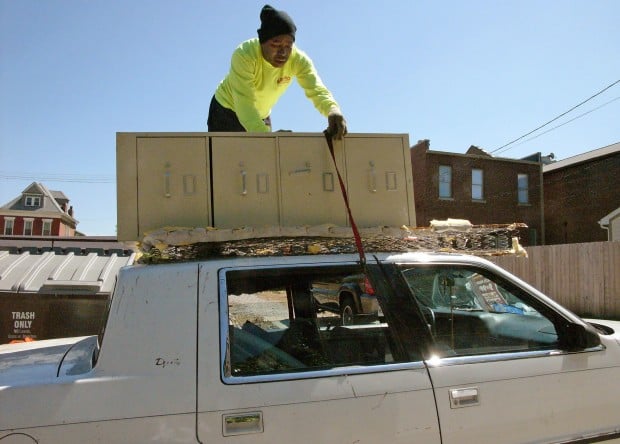 On a scrapping run, Eddie Moffett hits the "jackpot" with a metal file cabinet left in an alley around Lafayette Square April 6, 2012. Photo by Jesse Bogan, jbogan@post-dispatch.com 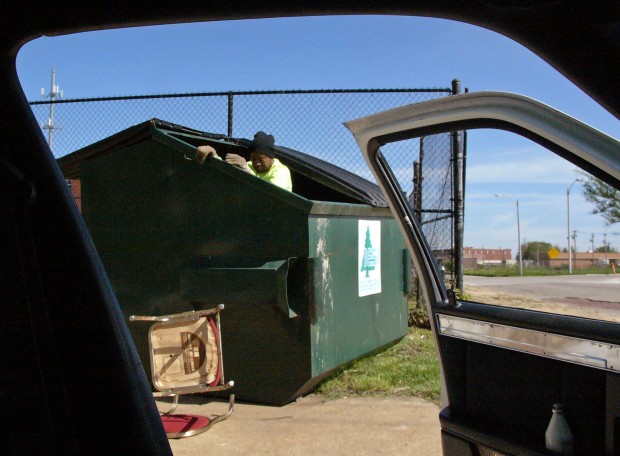 Eddie Moffett pulls a metal chair out of a Dumpster and estimates its scrap value is $1 on April 6, 2012. Photo by Jesse Bogan, jbogan@post-dispatch.com 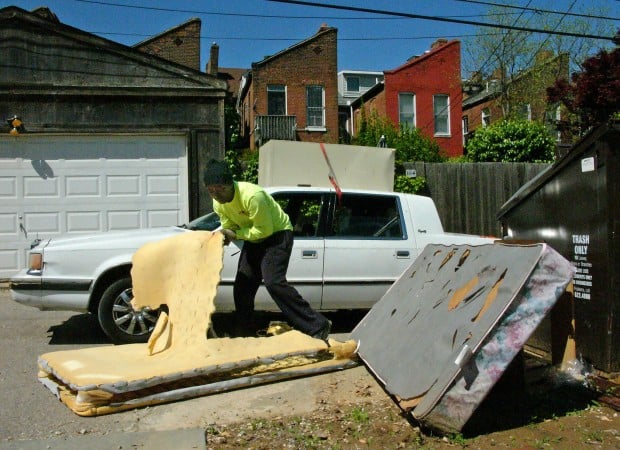 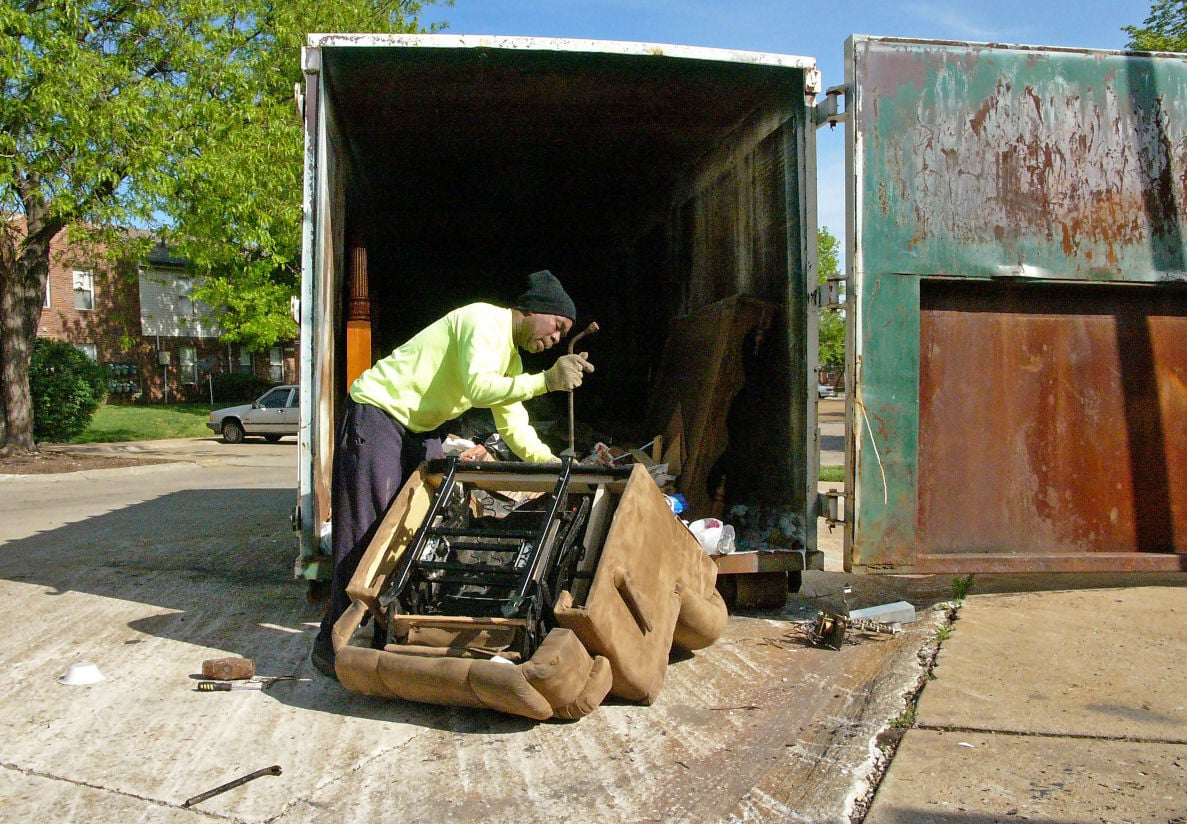 Veteran scrapper Eddie Moffett, 49, uses a collection of tools to harvest metal out of a discarded recliner at O'Fallon Place Apartments in St. Louis on April 6, 2012. Photo by Jesse Bogan, jbogan@post-dispatch.com

ST. LOUIS • Two mattress springs, a barbecue grill and the shell of an air conditioning unit were strapped to the roof of the passing Dodge Dynasty. The front and back seats were full of random pieces of metal. A bright orange vest dangled from the trunk to warn others of the slow-moving spectacle.

Pausing from his lunch in awe, a man near Hyde Park saw the high-riding heap and said it was a sign of the times. Another observer couldn't believe a cop hadn't noticed it.

But it was just a matter of blocks before a police officer pulled the white sedan over and came face to face with Eddie Moffett, 49, a street-wise metal scrapper trying to stay within the law — or at least close enough to keep going.

The officer wanted to know where he'd gotten the metal, so Moffett retraced part of his route to a nearby construction site where workers had left material for him. He was in the clear on this day, and he headed to the scales at a recycling company to weigh his haul, though with a warning from the cop to stay out of the neighborhood.

Despite a citywide crackdown on scrappers, Moffett would be back out in the family car in a few days. He had a $600 electric bill to pay and a wife and kids to keep happy.

"It's an honest way to make money, and you don't have to take nothing from nobody," he said. "You get out there and do what you have to do."

Scrappers have long operated on the fringes of society, scrounging for spare metal in streets, alleys and abandoned lots. The recession boosted their ranks as prices for some metals exploded. Veteran junk wranglers say there's more competition now for fewer items, as repair shops, construction crews and even residents cleaning out basements keep more for themselves to resell.

Meanwhile, the entry of drug addicts and other criminals has tainted the market. Copper thieves have become increasingly brazen in recent years, breaking into homes, dismantling air conditioning units and ripping down wires and gutters. Police have stepped up enforcement while also urging government officials to beef up laws governing recycling businesses, where the stolen materials end up.

Those who scrap as a regular job are getting stigmatized by the actions of thieves, said Adam Gubin, a fourth-generation scrap metal processor at Rimco Inc., near the city's waterfront.

"It's a way of life," he said. "You might have a person who looks really rough and might be legitimate."

For Moffett, scrapping is about survival, cruising the streets for discarded wire, iron, stainless steel, fan motors, compressors. The only items not worth his time are tin cans.

On July 1, scrap metal dealers in St. Louis must start tracking each transaction electronically and make databases easily retrievable for police. It's part of a host of new restrictions from an ordinance that took effect in January. One of the measures mandates that sellers show a photo ID, and cash payments for copper are no longer allowed, just checks.

Alderman Donna Baringer, who sponsored the ordinance, said thefts have dropped considerably. Between January and March 2011, there were 846 reports for scrap metal thefts valued at $1.3 million in losses, according to city figures. For the same period in 2012, there were 259 cases valued at $400,000.

"The problem hasn't disappeared. It has just moved out of the city," Baringer said.

The stigma hasn't disappeared, either, though Baringer said she's aware there are "alley gypsies" who are "legitimate people who do this for a living."

St. Louis police Detective Mark Rodebaugh said "dope fiends" are the real terror. Out of more than 250 metal theft arrests he and his partner have made since 2008, he said, 99 percent of the suspects were heroin addicts who had gutted vacant properties, often those with "for sale" signs out front.

Moffett learned the scrapping trade from his grandfather when he was a young boy growing up in Mississippi. He developed a good eye for knowing where metal is and how to separate it.

A long time ago, he did a stint in the Army. Scrapping today is part of a group of odd jobs for him. He's worked as a laborer and cleaned up after Hurricane Katrina. He does part-time catering. A security guard ID hangs from the rearview mirror of the Dynasty.

He shares the car with his wife, who works part time at Subway and is studying to be a nurse. They have to start the sedan with a screwdriver (the ignition is broken), and the speedometer doesn't work. Moffett has three grown children and two younger kids, ages 17 and 12.

Setting out in the Dynasty on a recent morning at 9 a.m., he wore gloves, a stocking cap, sweat pants and worn-out shoes. A fluorescent shirt with "Rimco" — the company he often sells to — written on it gave off a tinge of authority.

The first stop was for a set of dresser drawers discarded in an alley near downtown. He grabbed a magnet from the dashboard to test whether the inside rails were aluminum or iron, then broke them off and tossed them in the empty backseat.

He went on to O'Fallon Place Apartments, where, even though scores of trash bins were empty, he set into a rhythm diligently checking each one — drive, park, get out, look. After he found a lone spark plug, he shared the scrapper's mantra: "Every little piece adds up."

Soon he was on a roll. Window shades. Heater coil. He wrestled a recliner out of the garbage and went to work on it with vise-grip, a broken sledgehammer, a meat knife and a crowbar. He drew attention from a few spectators as he harvested the metal, but he told them he was just scrapping, and that seemed to be enough.

He scouted another complex where he'd been told before to stay out, but he went in for a quick look at the trash pile anyway, saying, "I am not trespassing, I am scrapping." He fished out a few items and was gone.

He talked about gas prices and often sang along to the radio during the route. His youngest daughter kept calling, wanting to know whether he would take her to see a friend. He told the girl, ever persistent, that she was trying to "out talk" him.

Pushing on to the waterfront, Moffett looked for washed-up barge cables. He eyed a mountain of rubbish near the Gateway Arch and scored a few parts from old television sets. He found a metal headboard, a microwave. In an alley near Lafayette Square, somebody left a bunch of old cast iron window weights off to the side.

Then he hit "the jackpot" in another alley. There was a jar of gold glitter, a circular saw and a large filing cabinet that he slapped onto the roof.

John Schwaig, whose glass art studio and shop uses the same alley, said scrappers are good stewards. Nearby residents said they leave things to be picked up.

"If they can use something again, why should it go in the ground?" Schwaig said.

Not far from there, Moffett skinned a few old mattresses, a new technique he started doing because of increased competition for low-hanging fruit. He said he made a point to clean up the scraps afterward.

By 1 p.m., the Dynasty sagged as Moffett drove up South Fourth Street toward the heart of downtown. He was nearly full when he spotted pay dirt off to the side of a restaurant. It was a large fountain drink system complete with a compressor, brass fittings and stainless steel. He waved traffic past, backed up and asked somebody if it was trash. He took it all apart and tied the scrap to the top of the trunk.

With a full load now, he dangled the orange vest from the trunk.

Driving near Busch Stadium, people on the sidewalks and at stoplights nudged others to look. Moffett just moved to the music and hit the blinker toward the slow lane on Interstate 70.

"It gets a load on it, and it pulls like a truck," he said of the Dynasty.

He drove to Rimco and got in line to weigh out. He had 500 pounds of metal and other odds and ends.

It was a little before 2 p.m., and his daughter called again. She didn't like what he had to say.

"You're worried about playing," he told her. "I'm trying to make money."

With all the items added together, he was $86.50 closer to paying the electric bill.

He was smoking when he stole metal from a live gas line, officials say.

Drive-through recycling will be held monthly on Saturday mornings at the city's Schroeder Park.

Recycling centers to be renovated, reused

Two area recycling plants will be renovated to handle the continuous growth of recycling in St. Louis County.

He sent away stolen gold jewelry to be melted before holding it for the required 15 days.

Police say nearly 900 hooks have been stolen in past two months.

Police say they have had a dramatic rise in such thefts since January.

WEST ST. LOUIS COUNTY • An infant was severely injured Thursday when he was scalded by hot water at his home under suspicious circumstances, p…

Prosecution failed to show drug was delivered in Illinois.

On a scrapping run, Eddie Moffett hits the "jackpot" with a metal file cabinet left in an alley around Lafayette Square April 6, 2012. Photo by Jesse Bogan, jbogan@post-dispatch.com

Eddie Moffett pulls a metal chair out of a Dumpster and estimates its scrap value is $1 on April 6, 2012. Photo by Jesse Bogan, jbogan@post-dispatch.com

Veteran scrapper Eddie Moffett, 49, uses a collection of tools to harvest metal out of a discarded recliner at O'Fallon Place Apartments in St. Louis on April 6, 2012. Photo by Jesse Bogan, jbogan@post-dispatch.com