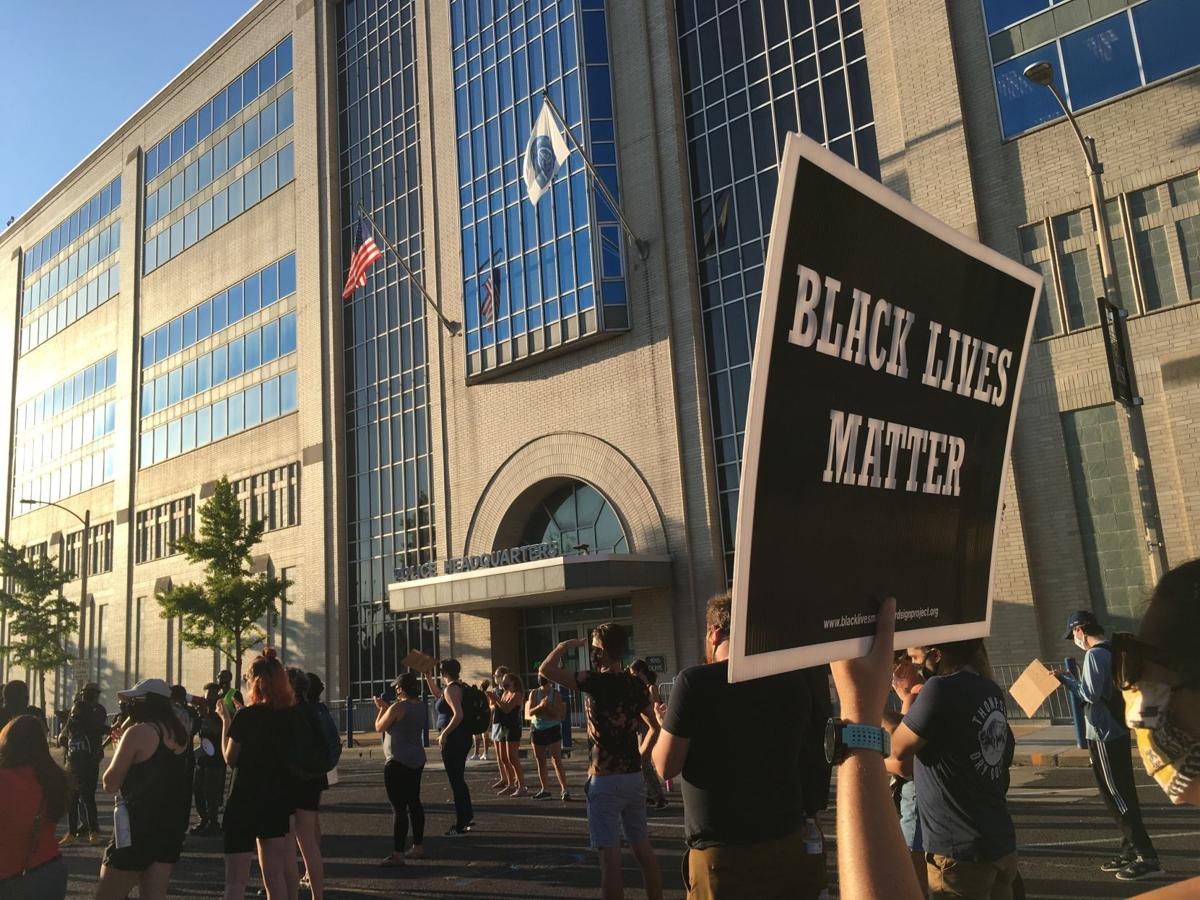 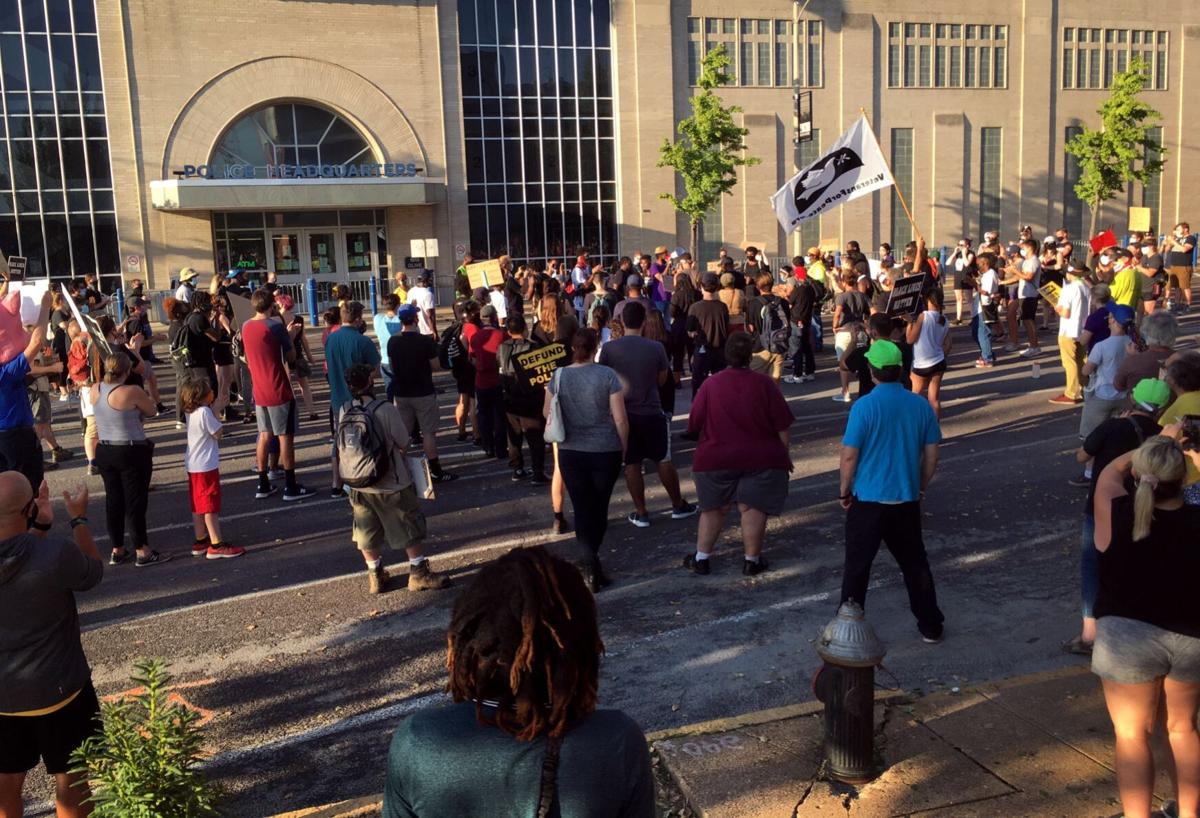 A crowd of protesters gather outside the St. Louis police department headquarters on Olive Street in St. Louis on Friday, Aug. 28, 2020. Photo by Joel Currier, jcurrier@post-dispatch.com 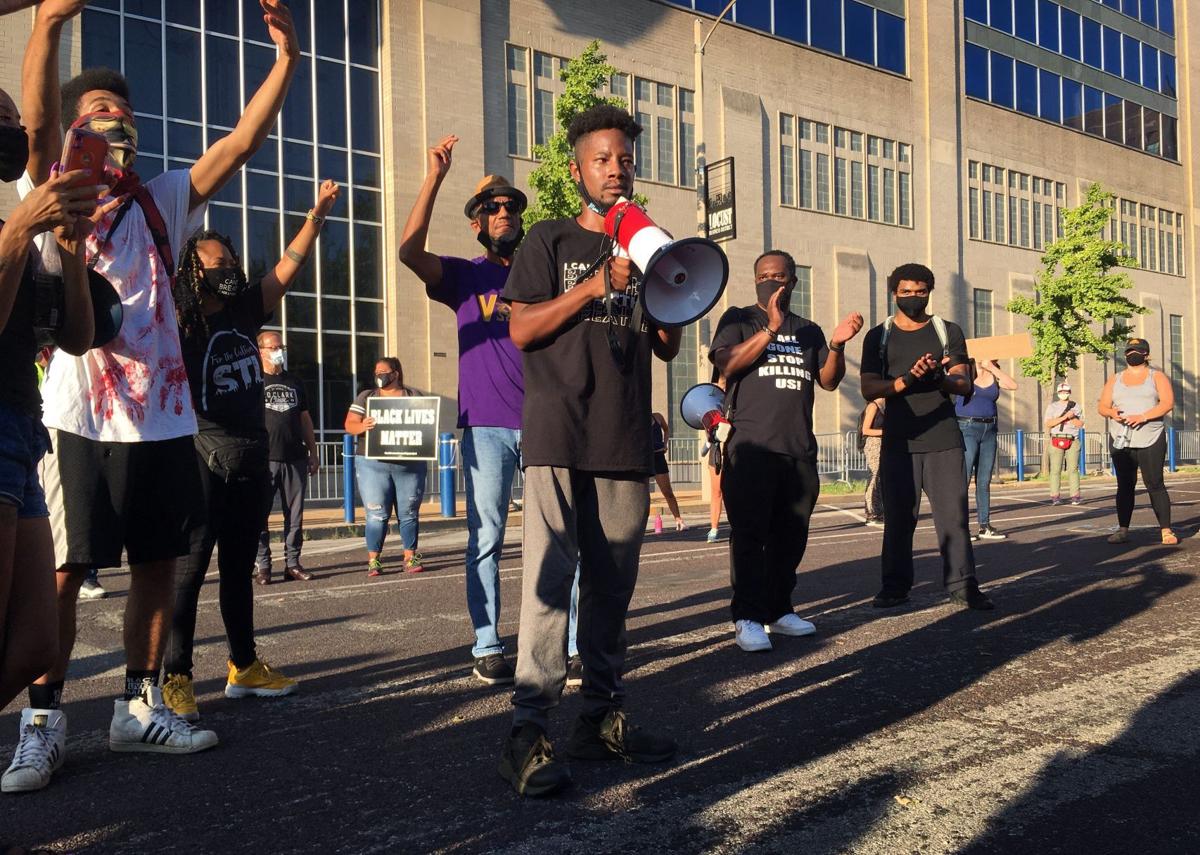 ST. LOUIS — Protesters on Friday night marched to a steady drumbeat through downtown St. Louis, calling for an end to racial injustice days after violence erupted in Kenosha, Wisconsin, after a police officer shot Jacob Blake, a Black man.

More than 100 people gathered for a demonstration that began at city police headquarters. Protesters marched through downtown, paused at Ballpark Village as patrons dined in the open-air courtyard, and continued to the outfield entrance of a crowdless Busch Stadium while the Cardinals played the Cleveland Indians.

The crowd screamed “No justice! No baseball!” just as the Indians outfielder Franmil Reyes smacked a three-run home run in the first inning, to give his team an early 4-0 lead.

Organizers from ExpectUs said the protest was intended to demand equal treatment of minorities by police, stall efforts to repeal the residency requirement for city police and employees, and criticize Missouri Gov. Mike Parson’s special session on crime. Parson’s session ended without legislation that would have given the state’s attorney general the authority to intervene in some local homicide investigations.

State Rep. Rasheen Aldridge, a St. Louis Democrat, told the crowd that the special session was a waste of taxpayer money and sought to undermine the authority of St. Louis Circuit Attorney Kimberly M. Gardner.

“We want to remind people that this is still very real — it’s still dangerous and under the Trump administration — it’s becoming more dangerous,” said organizer Rev. Darryl Gray, of the Greater Fairfax Missionary Baptist Church in St. Louis. “We want people to know that in the midst of Jacob Blake, in the midst of Breonna Taylor, in the midst of George Floyd, we’ll continue this fight for justice.”

Gray said St. Louis’ elected leaders are too focused on resolving the force’s 140-officer shortage instead of offering crime reduction plans in a city that has had more than 170 homicides so far this year.

“Until they begin to discuss honestly a comprehensive plan for crime prevention, then nothing is going to change in the city,” he said. “And until something begins to change, we’ll protest, we’ll speak truth to power and we’ll continue to show up.”

Protesters called out the now well-known names of Black men and women wounded or killed in confrontations with U.S. police officers, including Blake, who was shot seven times Sunday by a Wisconsin police officer. The shooting sparked unrest in Kenosha, including the early Wednesday killing of two men by a 17-year-old from Illinois who said he had come to the protest to defend property.

Taveous Bell, 20, a junior running back at McKendree University in Lebanon, Illinois, said marching Friday was personal for him because one of his cousins was shot and killed by police in Tennessee more than a decade ago.

“We as people, all together, need to come out and take a stand and let them know that this is not OK,” he said. “We won’t stop and we’ll keep pushing until it’s over with.”

Many who marched Friday were familiar faces from past protests in St. Louis, including near-daily demonstrations this summer after Floyd’s death at the hands of a Minneapolis police officer. But for Jackson Thomas, 18, of North County, Friday marked his first demonstration.

A McCluer North High School graduate who is attending St. Louis Community College at Florissant Valley this fall, Thomas said he worries how his younger brothers, 9 and 16, will fare now that he’s no longer in school to protect them.

“We out here getting shot every day, dying or losing family members,” Thomas said. “We can’t come home safely no more. Now I’ve got to worry about my own brothers going to school by themselves, and I’m not in school no more. I can’t go with them. I can’t follow them to school.”

ExpectUs is planning another protest at 11:30 a.m. Saturday in Kiener Plaza.

March in #stl pausing at Ballpark Village. “No justice! No baseball!” (#stlcards and the Cleveland Indians are scoreless in the first inning.) pic.twitter.com/CLFl2CLAfA

Without fans at Busch, this can be heard loud and clear while the #STLCards and Cleveland are playing. https://t.co/JVaemLqoGj

A group of property owners pushes to revamp or replace a tax district that funds security patrols and other initiatives.

A crowd of protesters gather outside the St. Louis police department headquarters on Olive Street in St. Louis on Friday, Aug. 28, 2020. Photo by Joel Currier, jcurrier@post-dispatch.com