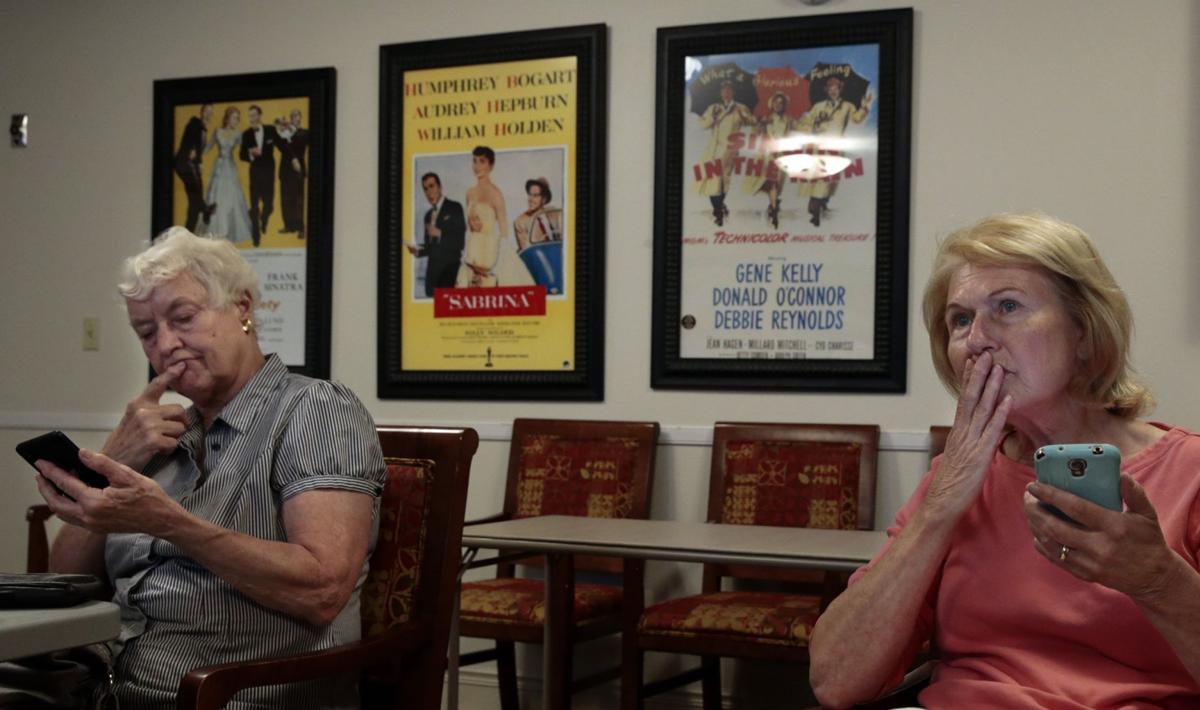 Mary Ryan (left), 73, of Kirkwood joins Elsie Gorski, 72, of Twin Oaks in smartphone confusion as they take an OASIS class in learning about their new electronics at Crestview Senior Living in Crestwood on Monday, June 27, 2016. Photo by Robert Cohen, rcohen@post-dispatch.com 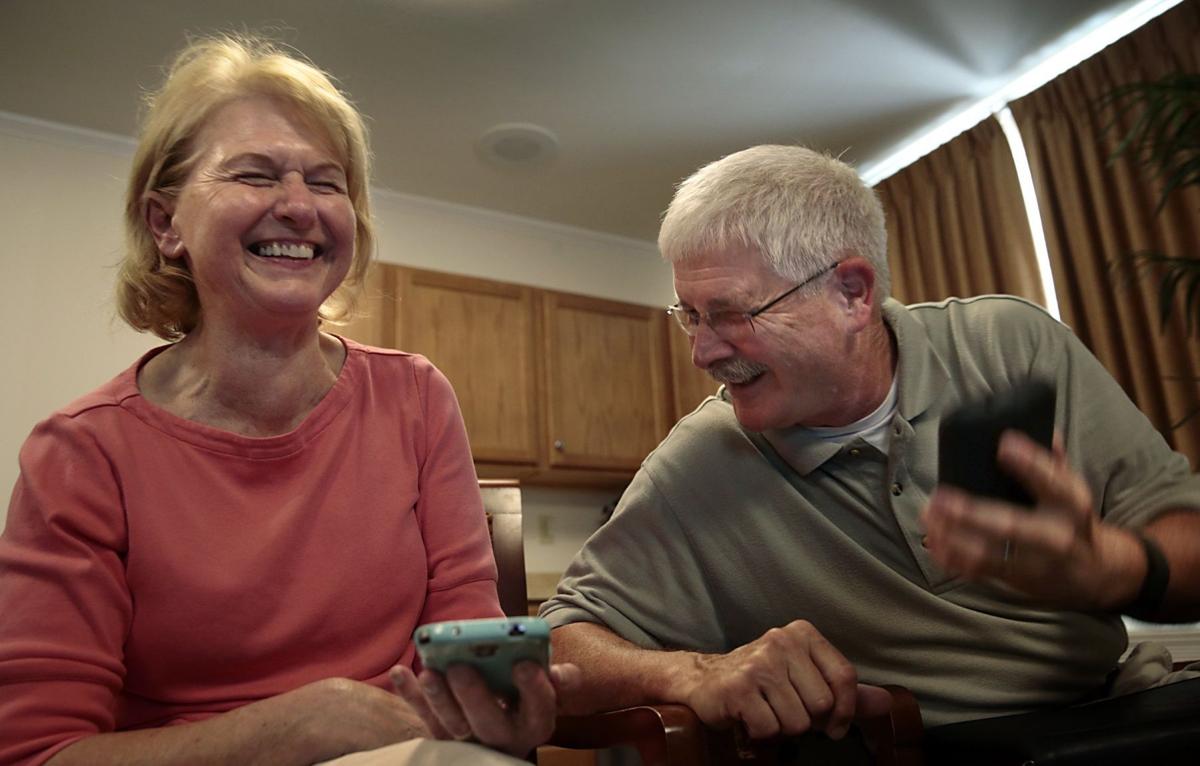 Elsie Gorski (left), 72, of Twin Oaks, and Bob Meyer, 65, of Woodson Terrace, share a laugh while taking an OASIS class in learning about smartphone use at Crestview Senior Living in Crestwood on Monday, June 27, 2016. Photo by Robert Cohen, rcohen@post-dispatch.com 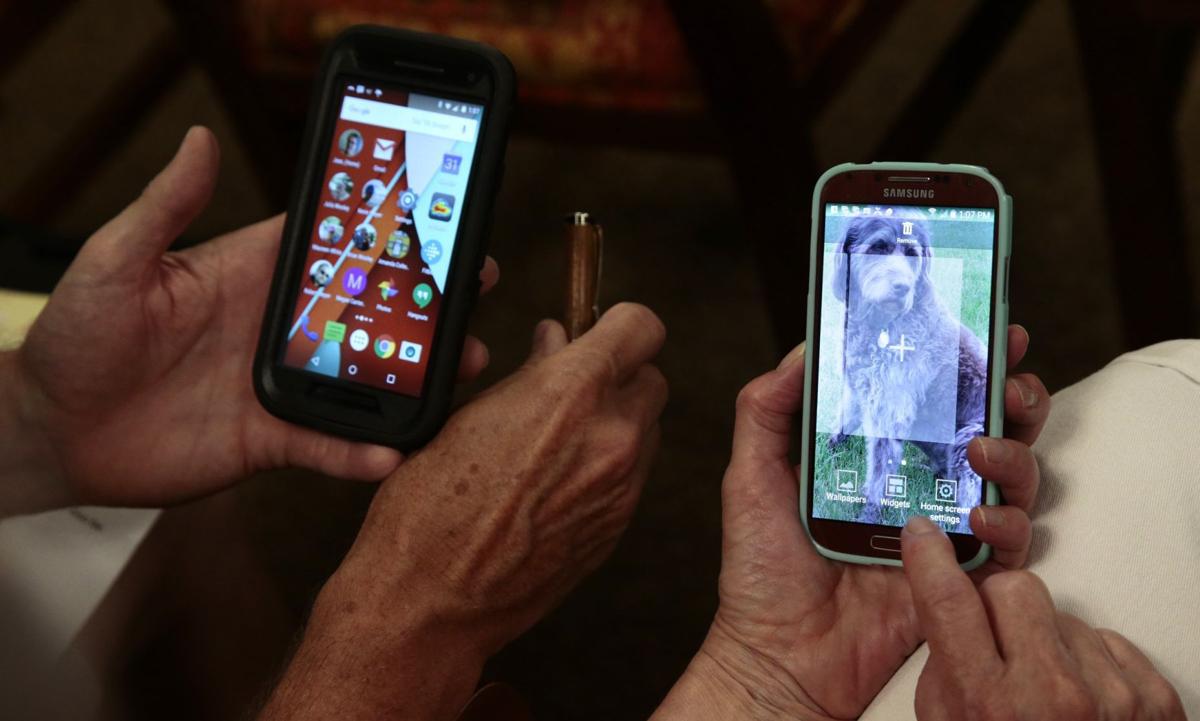 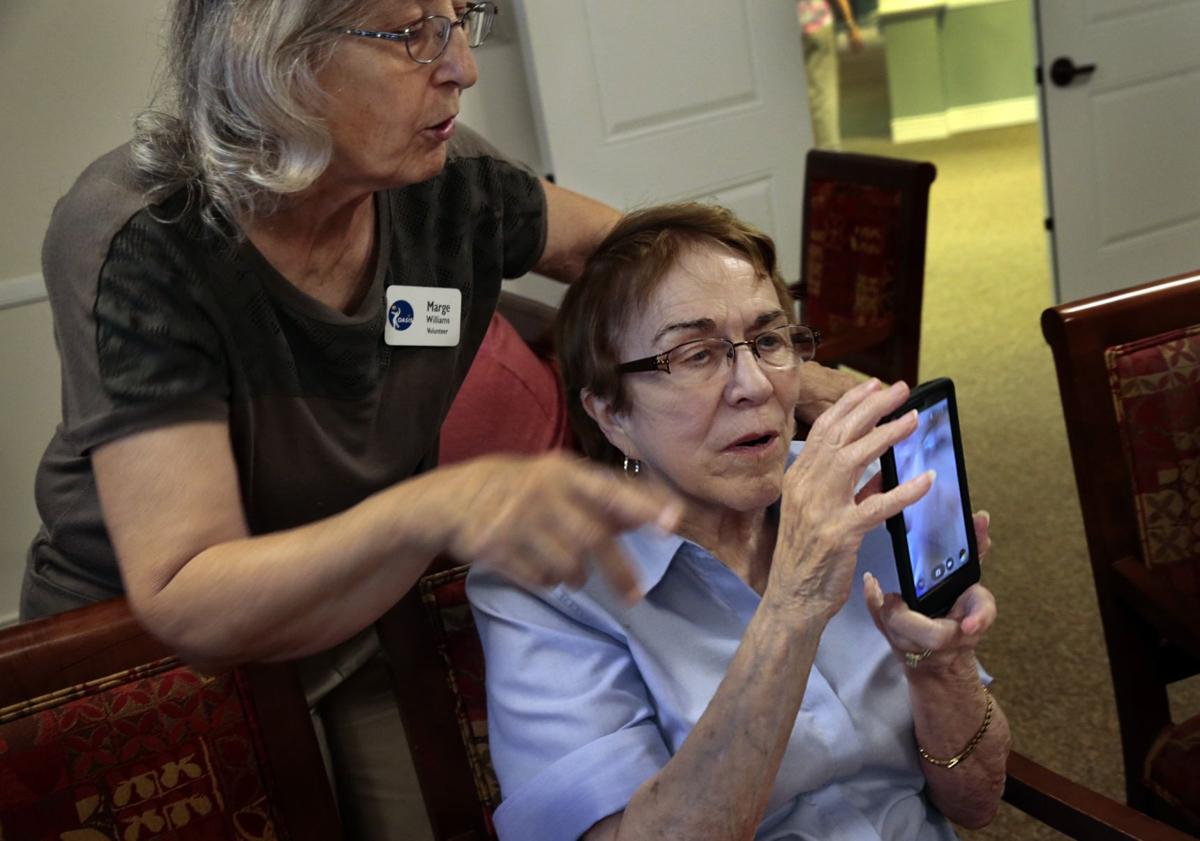 OASIS volunteer Marge Williams tells Vivian Miller, 81, to turn around her smartphone as she shows Miller how to take pictures during a class in helping seniors learn about their new electronics at Crestview Senior Living in Crestwood on Monday, June 27, 2016. Photo by Robert Cohen, rcohen@post-dispatch.com

CRESTWOOD • Mary Lou Anderson held the smartphone with authority. Two months into her relationship with the device, things are going well.

Friends showed her how to text and email from her Samsung 7. And making or receiving a phone call? No sweat.

But Anderson, 66, of Dogtown, knew the hand-held computer was capable of much more. She signed up for a class on Android use, learning how to shop for apps, access the calendar and attach photos to text messages.

“Friends begged me and begged me, and I resisted and resisted,” Anderson said of trading in her flip phone for a device that nearly two-thirds of U.S. adults now have. She did not like what smartphones had done to friends and family, unable to carry on a conversation without the distraction of downward glances at a lighted screen.

“But,” Anderson said as she looked at the phone cradled in her hand, “I like it.”

Anderson signed up for the “Getting to Know Your Android” class offered by OASIS Institute, a nonprofit based in St. Louis that offers a wide range of courses, recreational activities and tutoring opportunities for adults 65 and over across the country. Classes are also offered for iPhone users.

Technology classes have been central to the offerings of OASIS for 15 years. “Meet the Computer,” “Buying and Selling on eBay” and “Exploring the Internet” are current course offerings. But only in the past three years have smartphone classes become staples.

“We introduced tablet and smartphone classes in March 2013, due to requests from our participants. Demand for these classes continues to grow,” said Amy VanDeVelde, who runs the national technology training program for OASIS.

A Pew Research Center survey last year found that 64 percent of U.S. adults own a smartphone, compared with 35 percent in 2011.

Earlier this week, at Crestview Senior Living, Anderson joined five other seniors in a class taught by Marge Williams, a volunteer and peer. Having a teacher in the same age group as the students is important, VanDeVelde said.

Those who have grown up in a world of social media and texting are going to explain smartphone usage differently than someone who remembers when phones were household fixtures, often hung on a wall and connected to a cord, she said.

Williams has been a volunteer with OASIS for nine years, serving in various roles. With a growing interest in technology classes, she shifted her focus to helping other older adults become comfortable with their smartphones. As a retired computer programmer for what was then Laclede Gas, she saw it as a good fit.

“Being a senior myself, I say: ‘I’ve had trouble with this, too,’” said Williams, of Chesterfield. “To let them know they are not the only ones.”

To help the class see what she was doing, Williams plugged her smartphone into a laptop, using it as a projector for a large screen in the front of the room.

“Where are Favorites?” she said, reviewing items she had taught the week before. “How do you check the battery level?”

Williams then showed the students how to connect to Wi-Fi, going through “Settings” to get online. The signal was slow, but working, Williams said.

Up next: how to send a text.

“Do you have to know the phone number to text?” asked Elsie Gorski, 72, of Twin Oaks.

“Yes,” said Williams, and gave the students her phone number to send a test text.

“So, Marge, how do we know you got it?” said Mary Ryan, of Kirkwood.

“It will show on your phone that it was sent, but you won’t know I’ve read it until I respond,” Williams said.

Ryan stared down at her phone, nodding. Ryan, 73, got her smartphone two months ago, the highlight, so far, a text to her 40-year-old daughter with a “guess who?” message.

“My children are glad I’ve stepped into the 21st century,” Ryan said. “They’ve been dragging me by my heels.”

She abandoned an eight-year-old flip phone. The battery kept falling out, and Ryan would hold it in place while she talked.

Ryan came to the class at the convincing of her cousin Carol Jorgen, 72, of Fenton. Jorgen is a more seasoned smartphone user, getting hers as a Christmas present from her daughter.

The phone has created a bit of a rift between mother and daughter, Jorgen said.

“She expects me to pick this up right away,” Jorgen said of the new technology. Little by little, with the help of the class, Jorgen said she is figuring out the new gadget.

“I do like texting. It comes in handy,” she said. But, “I’d much rather speak to someone than text.”

“Me too,” Ryan said. “I like hearing their voice.”

But Ryan and Jorgen are realists. People their age know that technology is changing along with communication habits.

VanDeVelde tells her instructors to offer this advice: Get comfortable with texting. Open the lines of communications with younger family members “on their channel.” Once a conversation is underway, suggest: “Hey, let’s talk on the phone.”

The Android class consists of two sessions, each lasting two hours. Williams tries to hit the basics. So when her question: “Is anyone interested in coordinating their phone calendar with their PC?” was met with silence, she moved on. The class was more interested in how to take photos, access them from their phone and attach them to a text.

Williams held up her phone and explained that the camera was pointed toward the class. But it could also turn 180 degrees with a simple tap.

“A selfie,” she said with a laugh.

The class had learned a new smartphone function.

Mary Ryan (left), 73, of Kirkwood joins Elsie Gorski, 72, of Twin Oaks in smartphone confusion as they take an OASIS class in learning about their new electronics at Crestview Senior Living in Crestwood on Monday, June 27, 2016. Photo by Robert Cohen, rcohen@post-dispatch.com

Elsie Gorski (left), 72, of Twin Oaks, and Bob Meyer, 65, of Woodson Terrace, share a laugh while taking an OASIS class in learning about smartphone use at Crestview Senior Living in Crestwood on Monday, June 27, 2016. Photo by Robert Cohen, rcohen@post-dispatch.com

OASIS volunteer Marge Williams tells Vivian Miller, 81, to turn around her smartphone as she shows Miller how to take pictures during a class in helping seniors learn about their new electronics at Crestview Senior Living in Crestwood on Monday, June 27, 2016. Photo by Robert Cohen, rcohen@post-dispatch.com