FERGUSON — In cold winter months, Tony Rice delivers meals to people without homes and helps them find shelter and a hot shower at churches that volunteer to open the doors.

But as temperatures begin to warm, Rice, director of the Ferguson Warming Center, is keeping the mission going by handing out face masks to help protect the homeless from the rapid spread of the coronavirus. The masks are leftovers Rice bought to protect demonstrators from tear gas during protests in Ferguson in 2014.

“It felt good to be able to use them in this situation seeing that they all dried up in stores,” he said.

Meanwhile in Maryland Heights, every 45 minutes, Loaves and Fishes food pantry lets in just 10 people at a time to pick up carryout meals.

“We will wipe everything down and take the next round in and the next round in,” said Jacki MacIntosh, executive director of the pantry, which also operates an emergency homeless shelter for families.

In Belleville, the Interfaith Food Pantry on Friday asked for donations after running low on supplies. The St. Patrick Center in St. Louis also put out a call for donated food.

And while Cathy “Mama Cat” Daniels would normally be out delivering meals to the homeless and senior citizens, she is instead staying put in the First Congregational United Church of Christ where she cooks the meals. Only five of about 30 volunteers with her group, PotBangerz, are allowed in the kitchen at a time to pick the food up.

“It’s hard — right now we can’t hug on each other, because of this virus,” said Daniels, 59, who has diabetes among other health conditions.

Across the region, volunteers and social agencies housing and feeding the most vulnerable are taking extra precautions to limit the spread of the coronavirus as well as to protect the homeless. People without homes often have higher rates of chronic medical conditions and behavioral health conditions, according to the National Health Care for the Homeless Council.

And as stores and offices close and people stay home to fight the virus spread, officials and volunteers are attempting to find places for the unhoused to hunker in place or wash their hands.

In St. Louis, those efforts include ordering additional beds to place at shelters as well as discussing plans with area hotels and motels to open rooms for the homeless, Mayor Lyda Krewson said.

“We are looking in all directions to try to get anyone we can persuade to come off the street, to do so,” Krewson said at a news conference Wednesday.

“Not everyone wants to go into shelter, but that is our mission is to get them into shelter and to be able to spread them out,” she said.

Officials from across the region are coordinating a plan to open locations that could quarantine people who are homeless if necessary, said Yusef Scoggin, director of St. Louis County’s Office of Family and Community Services.

The centers would house people who are suspected of having COVID-19, the disease caused by the novel coronavirus, and are awaiting test results, as well as those who test positive for the coronavirus but don’t develop symptoms severe enough to require hospitalization, he said.

But several people living in a tent encampment north of downtown St. Louis said they feel safer there, rather than in a building with others.

“Everyone talks about the same thing — being in a gathering,” said one man who asked not to be identified. “But we can’t be in a gathering. None of us are riding on airplanes.”

“I’m here, I’m not moving around,” said a woman who identified herself as “Karol,” “unless someone with coronavirus brings it to me, there’s not much I can do about it. I’ve got other things on my mind to be worried about.”

But the shutdown of business — including libraries and buildings open to the public — has affected her daily life, she said.

“These are places where we use the restroom, or go to read a book, or the computer, or just to talk,” she said. “Two weeks is a long time.”

Meanwhile, St. Louis officials have placed hand-washing stations throughout the downtown area, and have advised shelters about maintaining appropriate distances between people to prevent the spread of the virus, Krewson said.

The shelters are taking extra precautions to keep things clean, including providing residents with hand sanitizer and information from the federal Centers for Disease Control and Prevention, as well as preparing to turn some rooms into makeshift quarantine spots.

“We have scoured our facility and we’re sterilizing it every night,” said MacIntosh, with Loaves and Fishes.

But cleanliness and spacing aren’t the only concerns, MacIntosh said. She worried about how much longer they’ll receive donations of surplus food and medical and cleaning supplies as stores close and shoppers stockpile supplies.

“No food on our shelves is no food to donate,” MacIntosh said. “I’m sure a lot of food pantries that rely on donations from grocery stores are panicking. We are. Be mindful as you go out and shop that there are people that have no way of even getting to the store.”

“We went out of the door today to try to see if there was more hand sanitizer and Clorox wipes but the shelves were, of course, empty,” Muhammad said. “It’s already a struggle for anyone providing homeless services, and this is a service that you just can’t shut down.”

The shelter, Muhammad said, has had to turn away volunteers who regularly cook and serve meals there, in order to help stop the spread of the virus.

So has Gateway 180 in the Carr Square neighborhood just north of downtown St. Louis, said Kathy Connors, director of the shelter that houses up to 150 people.

“We typically receive a lot of donations of food and meals,” she said. “But last week alone we canceled four meals that volunteers would have come in and prepared and served on site. We’re worried about just having food supplies.”

Staff are monitoring residents’ temperatures with special forehead thermometers they ordered, Connors said. The shelter placed one of the city’s mobile hand-washing stations outside the front door, and staff are using questions drafted by federal health officials to check new clients for symptoms before they’re allowed in — but they won’t turn anyone away.

“We are their temporary home, so we want to be able to maintain their ability to stay here and to keep everyone well,” Connors said. “If someone is referred to us for shelter and they have a temperature, we’ll send them to get medical attention first — but we won’t give up the spot they’re seeking.”

Rice, with the Ferguson warming center, said many of the people he gave face masks to already had hand sanitizer that had been delivered by other outreach groups.

“There are a lot of people doing the work in the streets,” he said. “I was really happy to see that.”

But with the virus spreading, some of the churches that offer temporary housing may not be able to open their doors, he said.

“It’s already difficult for them to just walk into a restaurant to wash their hands,” Rice said. “That is probably the No. 1 need: more walk-in places. During the day, not just at night.”

Daniels called on local officials to take immediate action to find shelter for those living on the streets, including seizing vacant buildings in the city if necessary.

“Let’s get people into one of these empty buildings that we have sitting there,” she said. “This is an emergency situation.”

The city by Friday will remove about 50 people who have been living in tents in downtown St. Louis and offer them medical screenings.

The city by Friday will remove about 50 people who have been living in tents in downtown St. Louis.

Lawyers for a woman living at the camp sought to block the eviction of people by the city, which expressed concern over the spread of the coronavirus.

The ArchCity Defenders law firm said many people who had lived in tents at Poelker Park along Market Street still don't have a place to live. 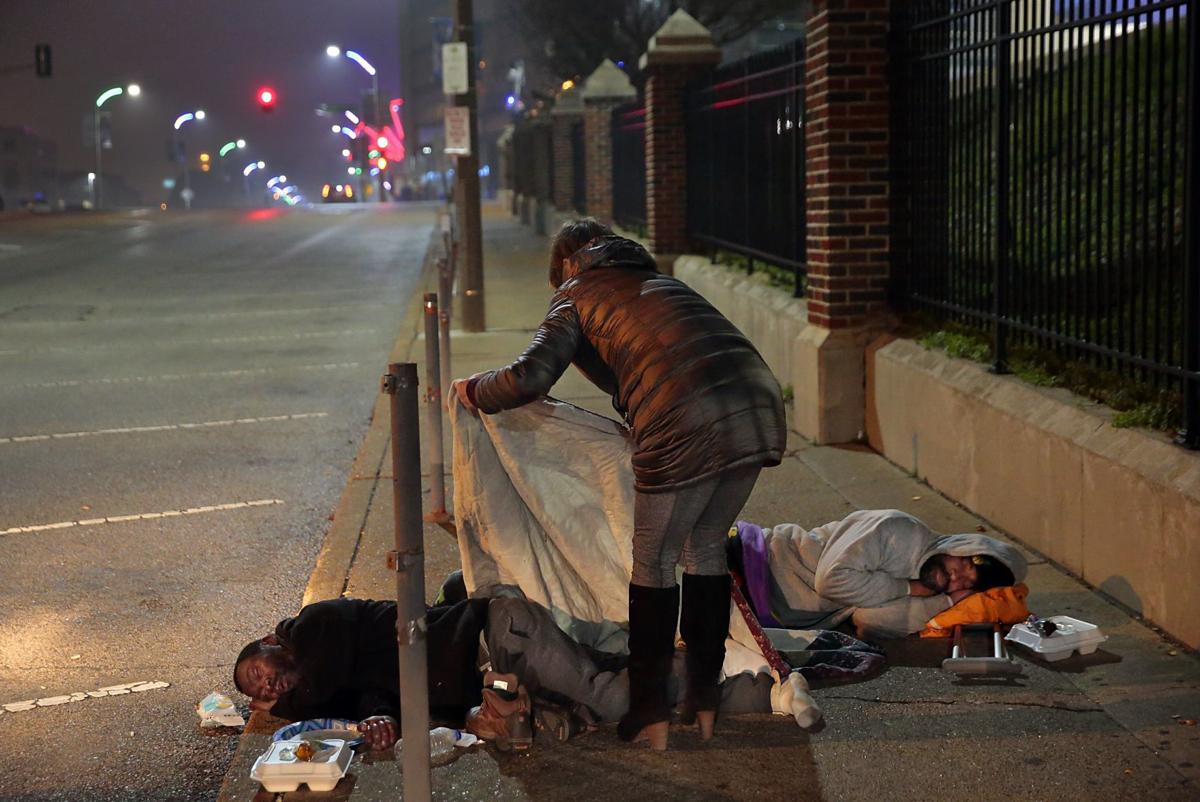 Emily Davis of the Ferguson Warming Center, covers a man with his blanket after delivering masks, hand sanitizer, food and clothing to men sleeping on the sidewalk on Clark Avenue near the City Hall parking lot on Monday, March 16, 2020. The breathing masks are leftover from those originally bought for marches in Ferguson in 2014. Photo by Robert Cohen, rcohen@post-dispatch.com 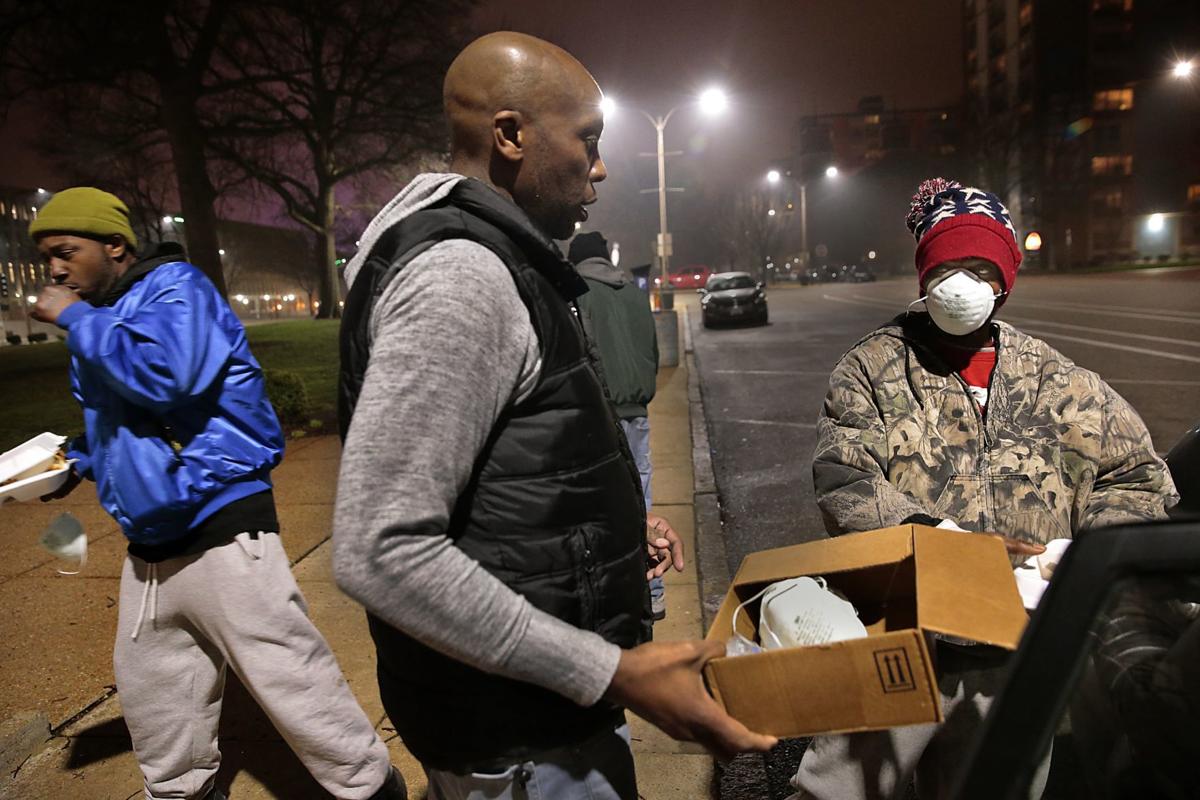 Tony Rice, center, executive director of the Ferguson Warming Center, delivers masks, hand sanitizer, food and clothing to homeless people in a downtown park during Rice's weekly delivery on Monday, March 16, 2020. The breathing masks are leftover from those originally bought for marches in Ferguson in 2014. Photo by Robert Cohen, rcohen@post-dispatch.com 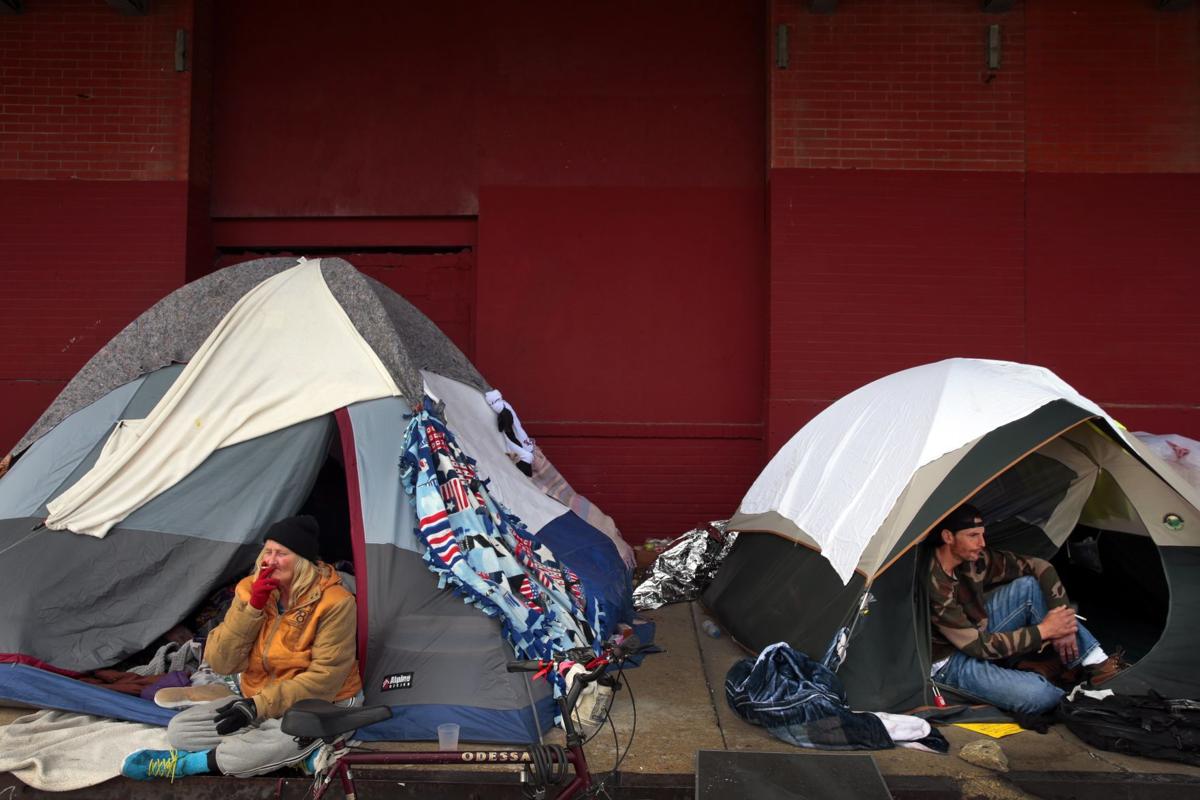 Karol, who declined to give her last name, and Joshua Foster smoke at their tents on a loading dock of the former McGuire Moving & Storage building on North Sixth Street in downtown St. Louis on Tuesday, March 17, 2020. Occupants of the 11 tents visible from Interstate 44 near The Dome at America's Center were served with a 10-day notice to vacate the property Tuesday morning. Photo by Robert Cohen, rcohen@post-dispatch.com 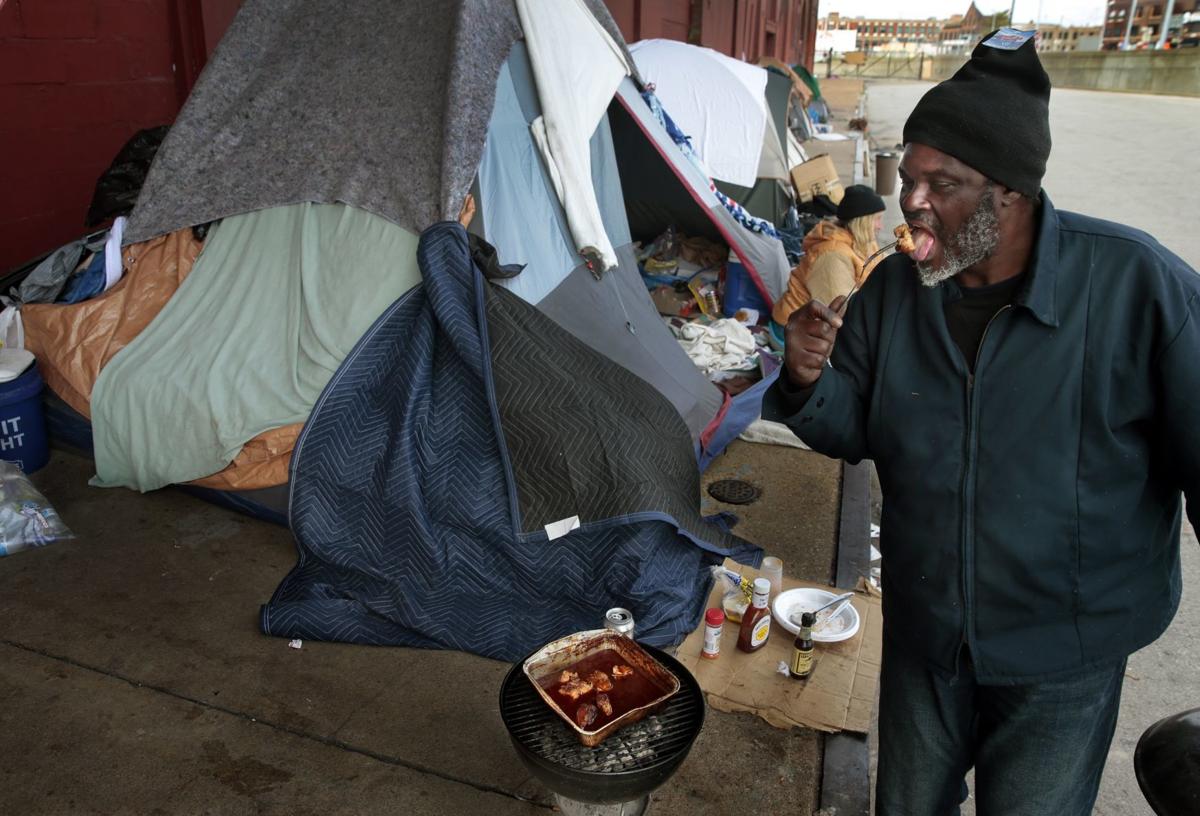 Richard Montgomery of Orlando, Florida cooks steak beside his tent on a loading dock of the former McGuire Moving & Storage building on North Sixth Street in downtown St. Louis on Tuesday, March 17, 2020. Occupants of the 11 tents visible from Interstate 44 near The Dome at America's Center were served with a 10-day notice to vacate the property Tuesday morning. Photo by Robert Cohen, rcohen@post-dispatch.com 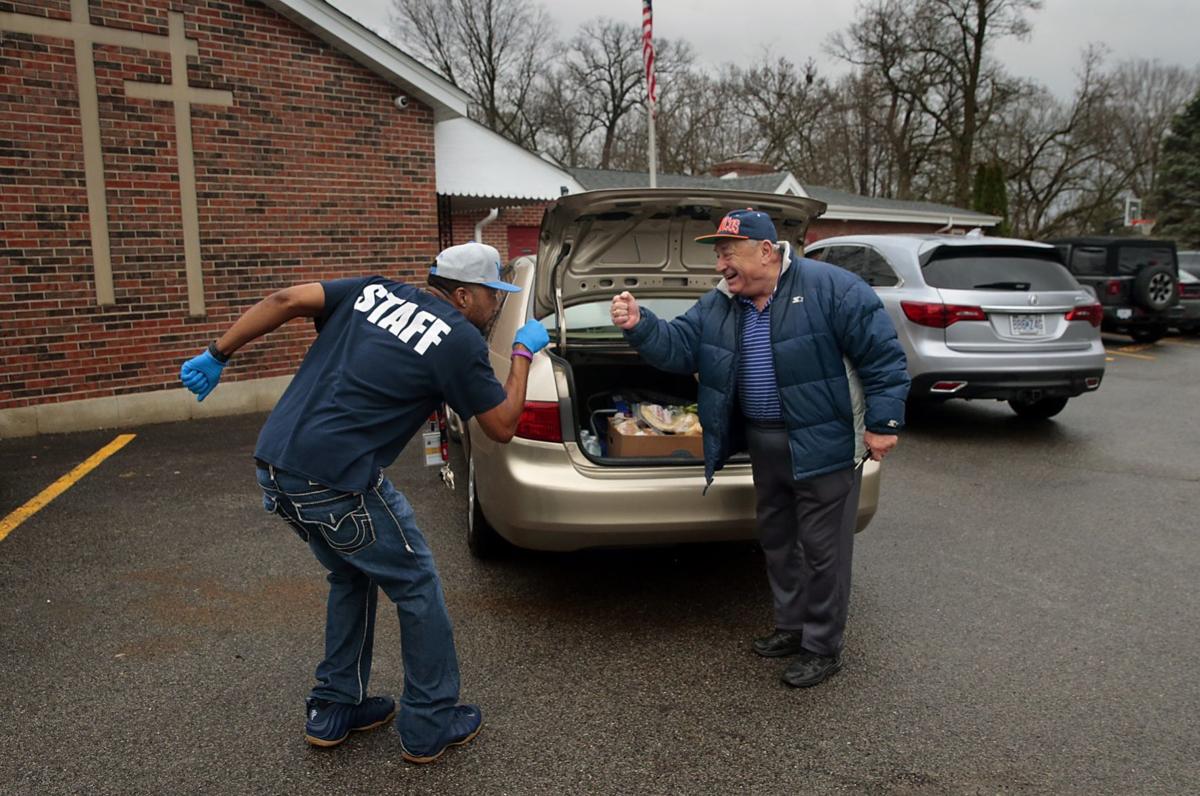 Loaves and Fishes food pantry coordinator Alan Ellis delivers an air fist bump with a box of food to Roma Borodyanskiy on Thursday, March 19, 2020. The Maryland Heights pantry is spacing out clients' pickup times due to coronavirus concerns. Ellis said he's seen a reduction in donations, especially perishables. "We're doing the best we can to make sure the have-nots have." Photo by Robert Cohen, rcohen@post-dispatch.com 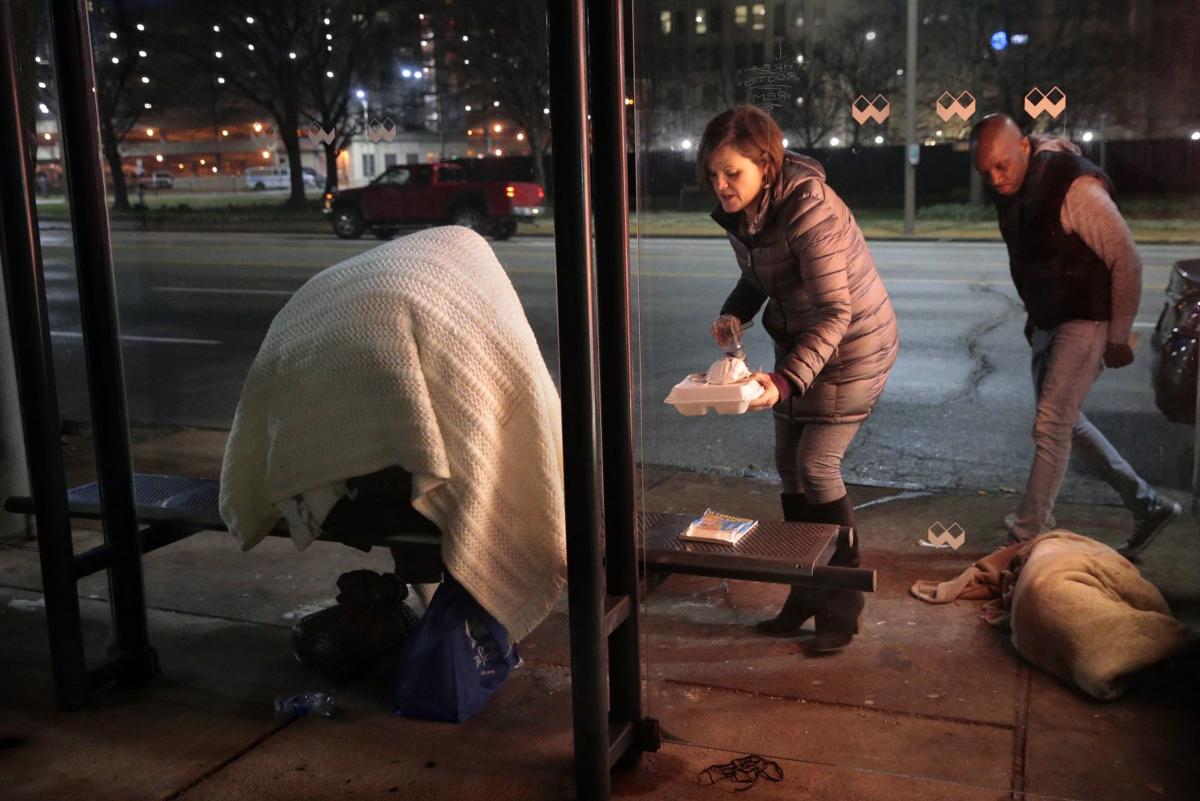 Emily Davis and Tony Rice of the Ferguson Warming Center, delivers masks, hand sanitizer and food to a man sleeping at a bus stop on Market Street on Monday, March 16, 2020. The breathing masks are leftover from those originally bought for marches in Ferguson in 2014. Photo by Robert Cohen, rcohen@post-dispatch.com