CLAYTON — As Geri Brotherton enters the St. Louis County Courthouse on a Wednesday morning in November, her hands are full and her mind is busy. Her husband, a lawyer and a social worker add to at least seven of her children walking beside her.

Two little girls in matching white skirts and denim shirts, their hair in braids and barrettes, can’t contain their excitement as they race up and down the hallway outside a courtroom.

They’re the reason the Brothertons are at the courthouse, and after they’re adopted in the next few minutes, the two girls, siblings ages 5 and 7, will be Brothertons themselves.

Courthouses are so often the scene of sorrow and despair. But for the Brothertons, the room is filled with giggles, laughter and joy as the judge hands the newest and youngest Brotherton girls teddy bears.

“Do you have the ability to maintain properly, care for and educate these adorable little girls?” asks Karen Siegel, the Brothertons’ attorney.

“Yes!” says Brotherton, along with her husband and both girls, who made sure they weren’t left out of any moment in court.

The adoption is now final; the children she’s taken care of since they were babies are legally hers.

“The real work starts now,” says Brotherton, who has adopted nine children and fostered more than 200 since the 1970s. Her wealth of experience at age 70 has taught her that the legal proceeding is a beginning, not a conclusion.

And whether or not it applies to her newest daughters, she knows that most children who are adopted or enter foster care, no matter how young, have traumatic histories.

In addition to being a foster parent and adoptive parent, Brotherton teaches a class with Family Forward, a nonprofit group that helps parents understand their children’s trauma and how it affects them and the child.

A new session of Brotherton’s class started last month, and about 10 parents settled into a classroom one Tuesday evening to discuss “parenting kids in difficult situations.”

They may have been strangers, but it wasn’t long before they shared a common denominator: the challenges of being a foster or adoptive parent.

“They come to your house and you tell them to trust you, and things will be different now, but think about it. What do they have to base that on?” said Gail Knipshild, one of the instructors.

Some of those in the class had just taken in a grandchild or family member’s child, temporarily or permanently. While they could cite plenty of positives about these children, they acknowledged that many of them were being disruptive and disobedient at home, cursing, acting out in school, stealing and being manipulative. The children had endured sexual assault, domestic violence and more.

“They are survivors first and foremost,” Knipshild said. “The thrust of this class is (that) we’re looking at you changing, not them. Traditional parenting is not going to work.”

As the Brothertons left the courtroom, another joyful family clutched balloons and sported matching shirts as they awaited their own adoption proceeding.

Adoptions have been on the rise in the St. Louis area. About 160 adoptions were finalized in St. Louis and St. Louis County in 2018, the highest number since 2014.

And more than 700 children were admitted to foster homes in 2018, according to the latest annual report from Missouri’s Children’s Division. The average age of the new foster children was 8.

A 10-year analysis from the Adoption and Foster Care Analysis and Reporting System shows that after a child’s second birthday, the chance of being adopted begins to decrease. But the need for caring adults remains, and foster parents fill a vital role. Siegel knows of one foster parent who only takes in teenagers and welcomes the challenge.

People considering adoption or foster parenthood must be at least 21, have a stable income and meet many other requirements, including taking classes.

After having children, one St. Louis County couple decided to become foster parents to provide families under stress with a “break and breathing room,” they said.

They had no background in child care beyond being parents, but some of their friends had opened up their home, so the couple took on the task. They ended up with two siblings who were a year apart.

Although they didn’t anticipate adopting, the 6- and 7-year-olds fit perfectly in their family of four. The couple’s plans changed.

“With any child in the foster care system, they have not come out of consistent parenting, structured parenting,” the children’s adoptive mother said. “They’ve experienced trauma. So to come into a healthy home for them, it’s a bit of a shock all the way around because that wasn’t their normal.” The mother did not want to be identified by name to protect her children.

The adjustment took patience and empathy, not only from both parents, but from their biological children as well. Such random things as a fork, peach pie, scissors and glue were among items that triggered outbursts in their new children, or sent them hiding behind chairs.

Despite training, the couple said they were not fully prepared to handle the situation. So they switched things up. Instead of timeouts, there was “time in” because they realized the children needed to be with them more, not less. They also enlisted the help of therapists who gave them tools such as breathing exercises that helped the children with anxiety. The couple continued taking classes with Family Forward. The experience has been richly rewarding.

“They’re kids from really hard places, so it doesn’t always come with a pretty package and a bow, but man, they’re some of the toughest fighters and biggest survivors and overcomers,” the mother said. “Whether you adopt kids or have them in your home for 72 hours or three weeks or three months with no expectations of appreciation or thanks, you’re planting seeds.”

A lasting impact is what one north St. Louis County foster mother hopes she had on a pair of siblings who were born addicted to heroin and crack cocaine.

It’s been almost 13 years since she cared for them (they were eventually reassigned by the state to a family member), and she’s taken in a number of other children as a foster parent, but she remains connected with the pair.

“They are my babies and they’ll always be mine,” she said, asking not to be identified by name to safeguard the identity of the children.

Doctors prescribed medicine to help the siblings handle the drug withdrawal, and the foster mother used things like classical music to calm them. She continues to take classes at Family Forward and is grateful to the Foster and Adoptive Care Coalition for providing such items as baby beds, swings and clothes.

Coordinating care, such as figuring out what state money is available for medical and therapeutic services, can be stressful, and the North County foster mother said a good social worker is key.

For close to 20 years she’s worked in the adoption system as a “public defender for families,” representing those who could not afford a lawyer and as a private attorney for others.

Some parents don’t know what resources are available, and others have problems gaining access to them, Siegel said.

“Being a foster parent is one of the most stressful jobs in the world,” the North County foster mom said as she attended to a child who woke up at the sound of her voice. “But it all boils down to what’s best for the child.” 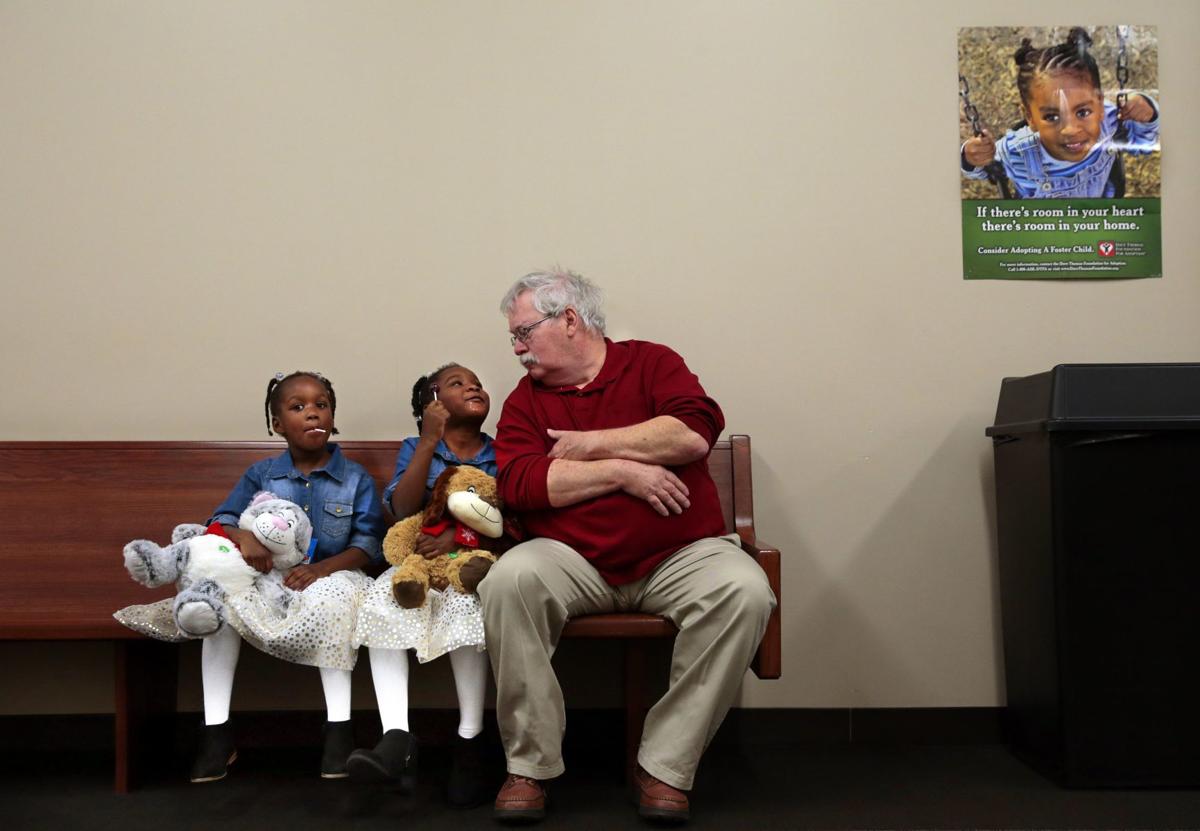 Marissa, left, and Kimora Brotherton enjoy candy and stuffed animals given to them by a family court commissioner on their adoption day as they sit with their father Bill Brotherton on Wednesday, Nov. 6, 2019. Geri and Bill Brotherton of Bridgeton, who have adopted nine children and have three biological ones, have cared for Kimora since she was nine months old. Marissa came to them two days after birth. Photo by Robert Cohen, rcohen@post-dispatch.com 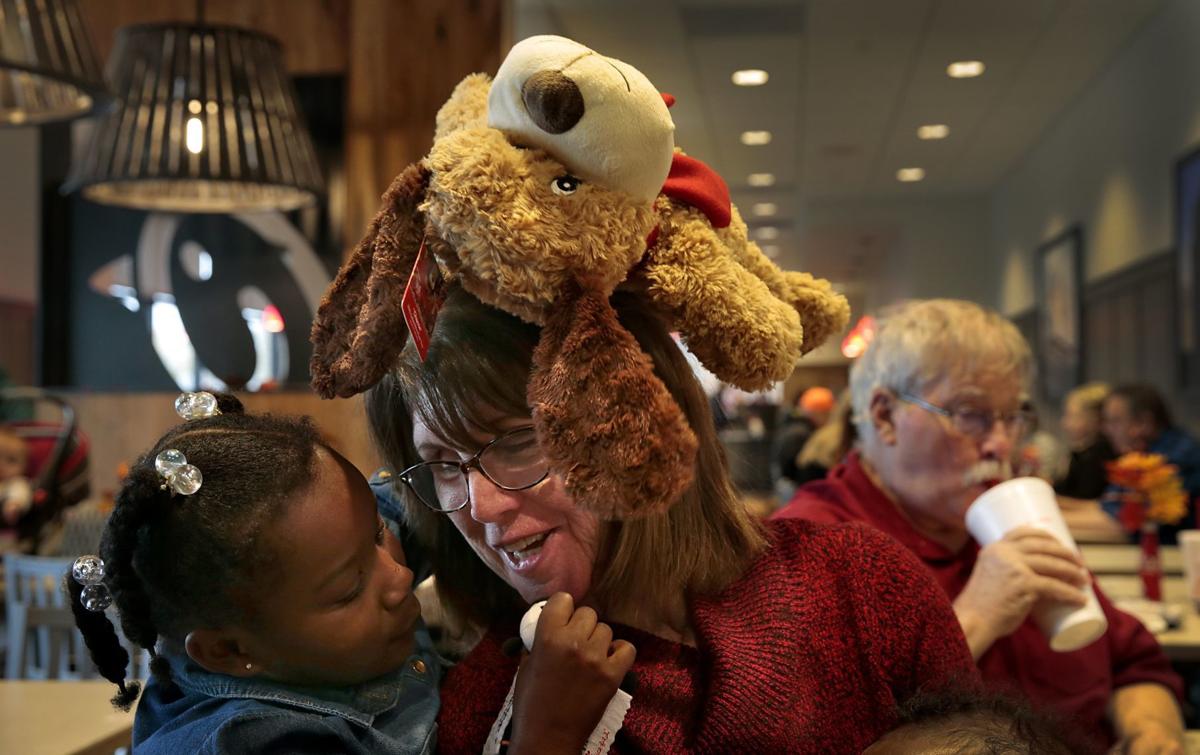 Kimora Brotherton, 7, visits with her mother Geri as her family has a celebratory lunch at a Bridgeton Chick-fil-A after officially adopting Kimora and her sister Marissa on Wednesday, Nov. 6, 2019. Photo by Robert Cohen, rcohen@post-dispatch.com 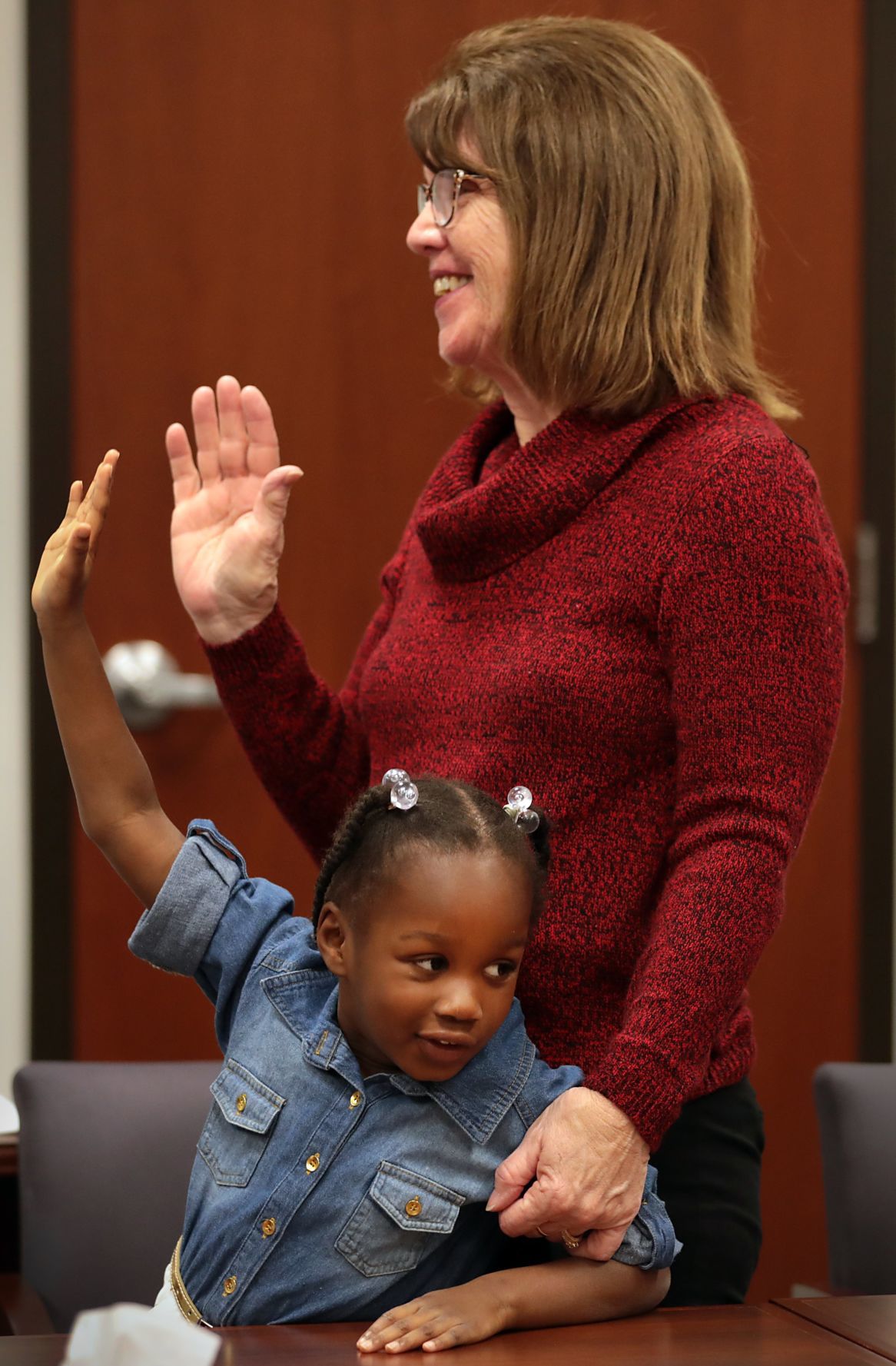 Geri Brotherton is sworn in before testifying before Family Court Commissioner Heather R. Cunningham as her soon-to-be daughter Marissa, 5, joins in on her adoption day on Wednesday, Nov. 6, 2019. Photo by Robert Cohen, rcohen@post-dispatch.com 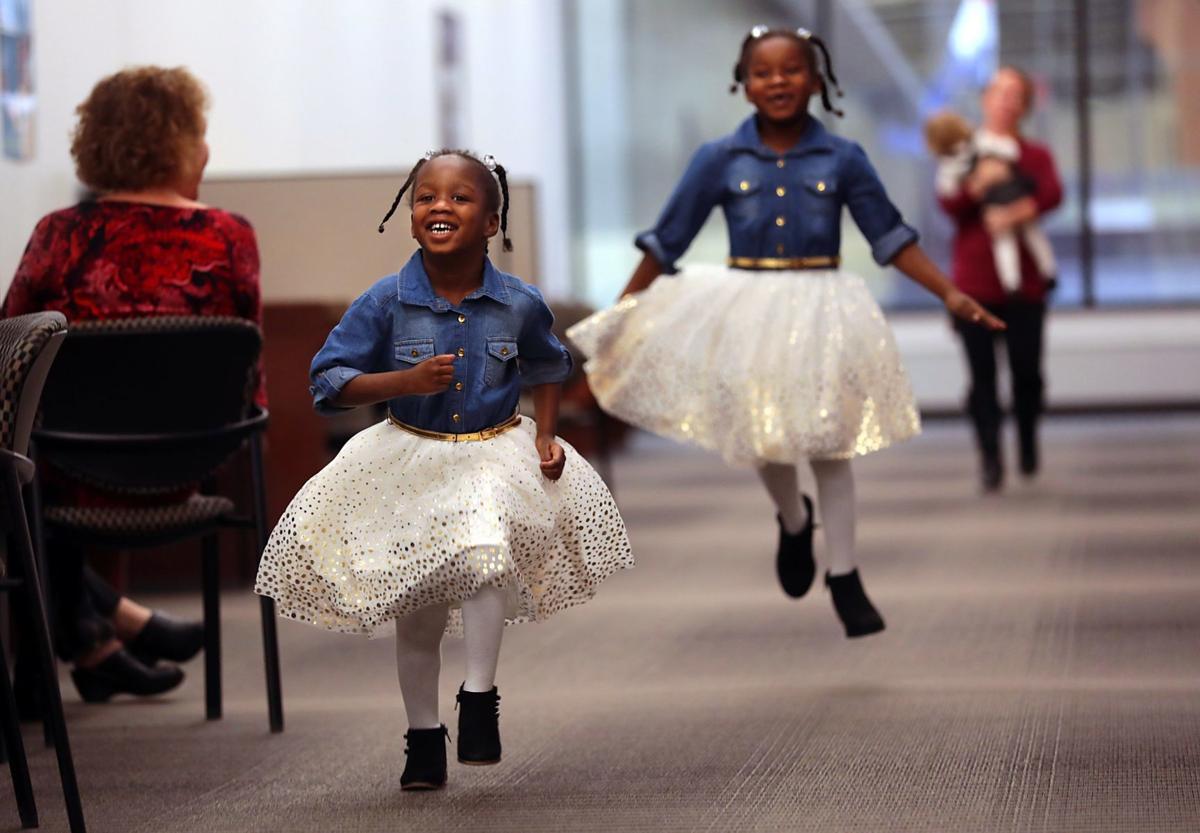 Marissa, left, and Kimora Brotherton run towards their parents Geri and Bill Brotherton before final adoption proceedings in St. Louis County Family Court on their adoption day on Wednesday, Nov. 6, 2019. The Brothertons of Bridgeton have cared for Kimora since she was nine months old. Marissa came to them two days after birth. Photo by Robert Cohen, rcohen@post-dispatch.com 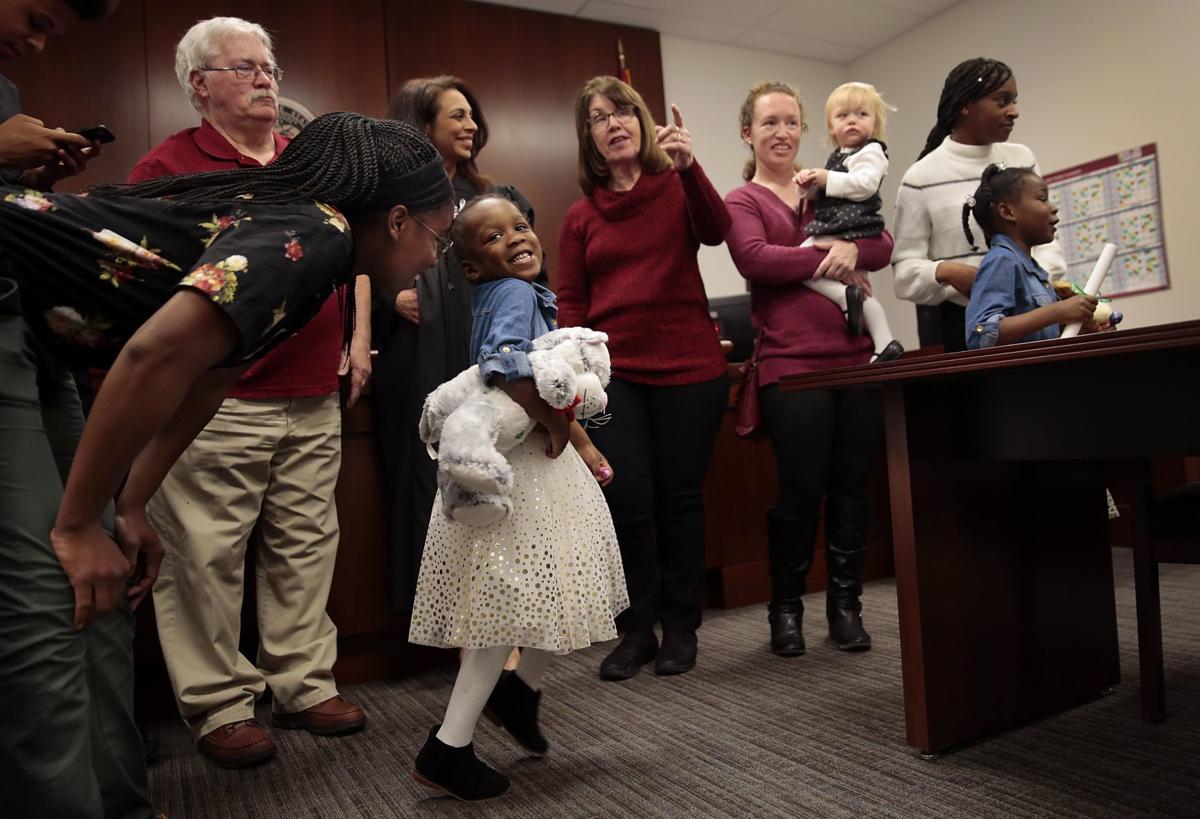 Ashley Brotherton, left, talks with her new sister Marissa, 5, as the Brotherton family gathers to have their photo taken with Commissioner Heather R. Cunningham following the official adoption of Marissa and her sister Kimora in St. Louis County Family Court on Wednesday, Nov. 6, 2019.  Photo by Robert Cohen, rcohen@post-dispatch.com 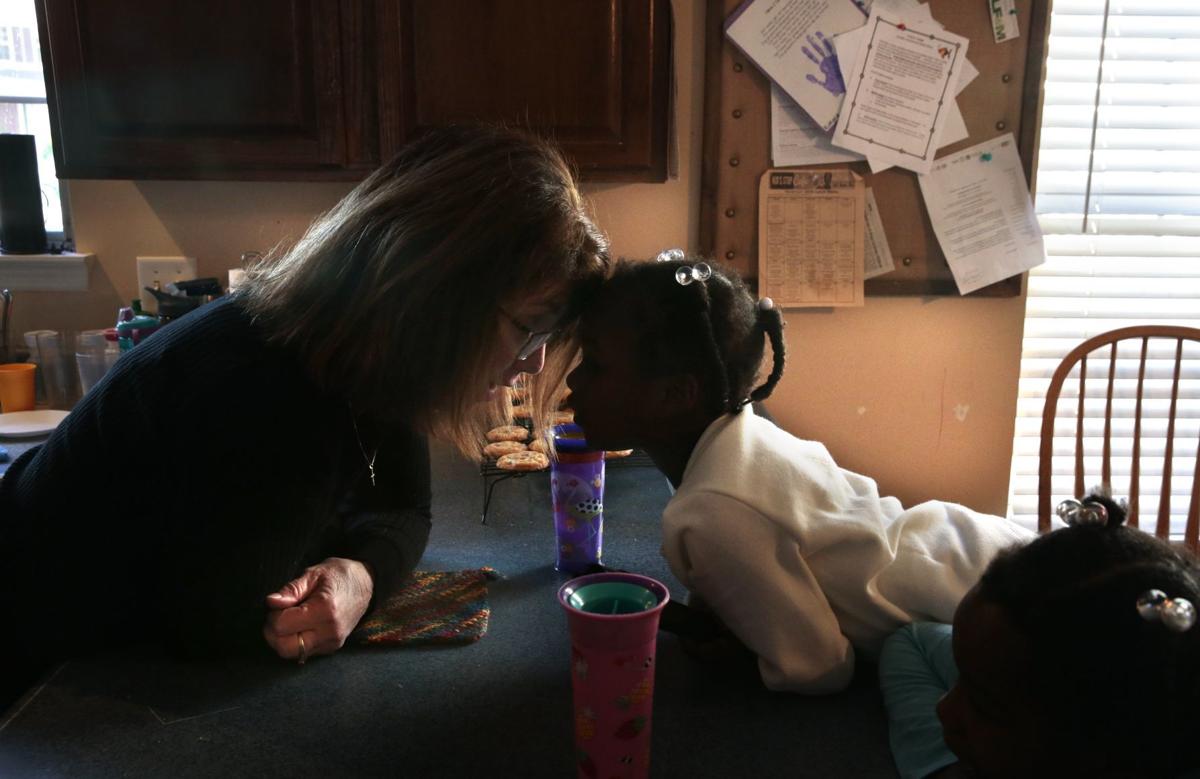 Marissa Brotherton, 5, and her mother Geri Brotherton talk quietly after making cookies for Geri's granddaughter at their home in Bridgeton on Friday, Nov. 8, 2019. Photo by Robert Cohen, rcohen@post-dispatch.com. 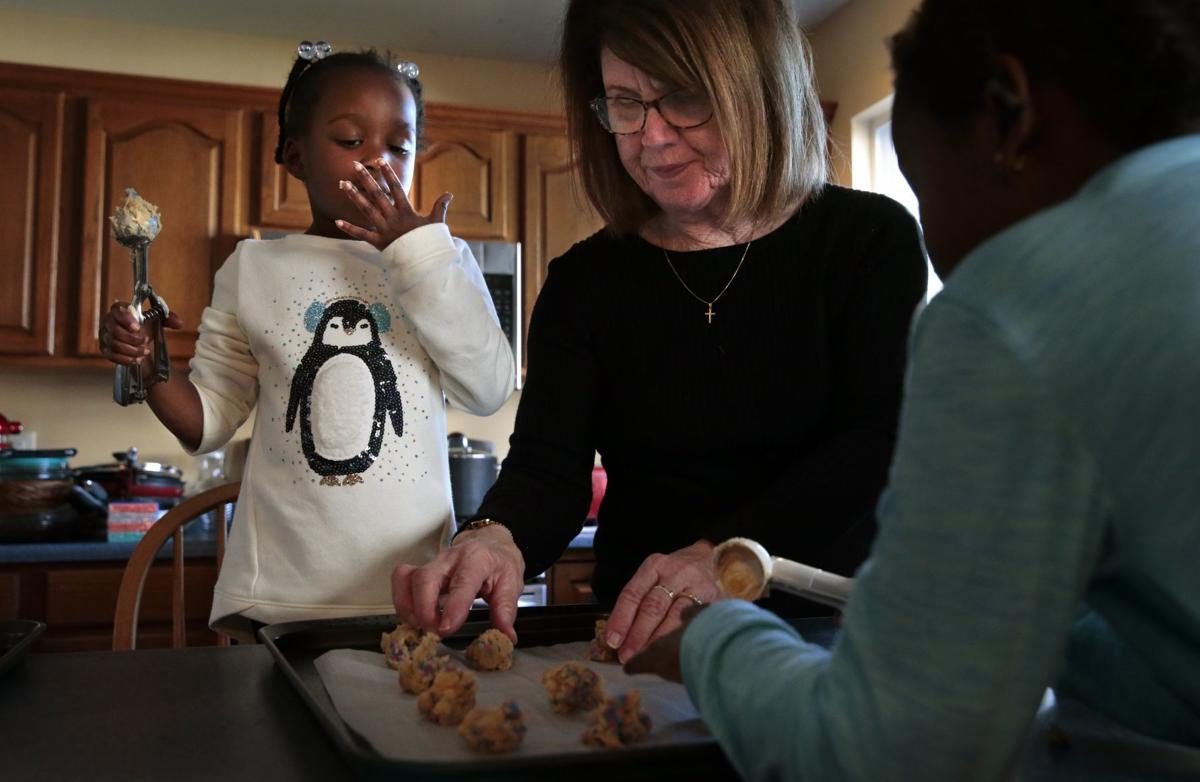 Marissa Brotherton, left, 5, and her sister Kimora, 7, help their mother Geri Brotherton make cookies for their niece's birthday party at their home in Bridgeton on Friday, Nov. 8, 2019. Photo by Robert Cohen, rcohen@post-dispatch.com.