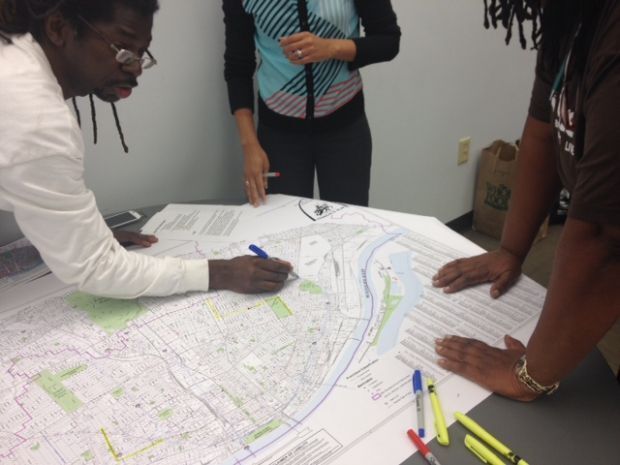 Curtis Royston III, a bicycling advocate, talks about potential routes for a neighborhood greenway system Wednesday night at a meeting hosted by Trailnet. 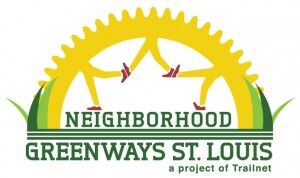 ST. LOUIS • Imagine a network of pedestrian and bike-friendly greenways in the city of St. Louis, where people feel safe to go outside, get some exercise, and spend time going places and getting to know their neighbors.

Trailnet, a cycling, walking and trail advocacy group, is starting the conversation about creating a neighborhood greenway system in the city. On Wednesday night, it hosted the first of three neighborhood meetings in St. Louis to garner neighborhood interest and get input on how a network might be built.

In short, neighborhood greenways are residential streets transformed to encourage biking and walking – in a low-stress, family-friendly way. Streets might have dedicated bicycle lanes, bicycle lanes buffered by landscaping, dedicated signage, or speed bumps and lowered speed limits to encourage cars to slow down. The greenways would build upon the growing network of bicycle lanes in the city.

The city of Portland is expanding on a network of neighborhood greenways. By 2015, more than 80 percent of all Portland residents will live within half a mile of one.

“We see this as something that could take St. Louis to the next level,” said Jennifer Allen, project manager and Trailnet staffer. The group wants to create a cultural shift where the average person feels safe about biking in the city, she said.

The project is part of the city's sustainability plan, which calls for considering the greenways to help people get around the city. The project will first focus on the Ville, Greater Ville, JeffVanderLou, and Carr Square neighborhoods in north city and Forest Park Southeast and Dutchtown.

Lance LeComb, spokesman for the Metropolitan Sewer District, said at the meeting that the district hopes to work with Trailnet if the greenways become a reality. “Rainscaping,” or managing rainwater where it falls, can be built into the greenway system and help improve the sewer system overall, he said.

Carl Filler, from the St. Louis City Department of Health, also spoke and pointed out that greenways would promote physical fitness. People who live in walkable neighborhoods are two times as likely to get enough physical exercise than those who do not, he said.

Linda Carter, 66, a retired nurse from the Kingsway West neighborhood, likes the idea of a neighborhood greenway system. It will help the planet and people's health, she pointed out, and she might be more likely to walk in a green space closer to her house rather than a park she has to drive to. “I would be more interested in walking if I would feel more safe,” she said.

Curtis Royston III, 45, an advocate who runs the St. Louis Major Taylor Bicycle Club, which encourages bicycling among African-American youth, loves the idea of a greenway system. Bicycling is a non-aggressive activity that gives children something to do and brings communities together, he said. “The cycling community here in St. Louis is one of the most open and peaceful groups I've been involved in,” he said. “There's a lot of good that can come out of this.”

There's no money set aside to build such a project yet, but Trailnet still needs community input to see if people want it and, if so, get funding and form partnerships with other groups to build it, Allen said.

Trailnet will be hosting two more kickoff meetings about the project. The next one is Saturday, May 24 from 10 a.m. to 12 p.m. at the Thomas Dunn Learning Center, 3113 Gasconade Street. The third is Thursday, May 29 from 6 to 9 p.m. at Joyia Tapas, 4501 Manchester Avenue. For more information, visit trailnet.org.

Crowd begins to gather at St. Louis sports bar for crucial US soccer game vs. Iran

Venue owners don't expect as large of crowds as Friday's US match against England, during the Thanksgiving weekend, but say the must-win game Tuesday will still draw many supporters.

Soccer fans across the St. Louis region rejoiced Tuesday as the U.S. beat Iran 1-0 and advanced to the World Cup's round of 16.

A few days ago, Kamenetzky read that Szapszewicz's family had lost almost all its belongings in this summer's flood. Kamenetzky called his museum coworkers immediately.

The trouble with Coldwater Creek: It’s not just Jana Elementary

Hundreds of people braved gray clouds and temperatures in the high 40s for the 38th annual Ameren's Thanks For Giving Parade, which featured more than 120 different floats, giant balloons, performances and other attractions from across the region.

One Thanksgiving tradition canceled as St. Louis-area nonprofits scramble to feed the needy

‘She was bold, she was bright’: Teen killed in St. Louis school shooting remembered

Curtis Royston III, a bicycling advocate, talks about potential routes for a neighborhood greenway system Wednesday night at a meeting hosted by Trailnet.