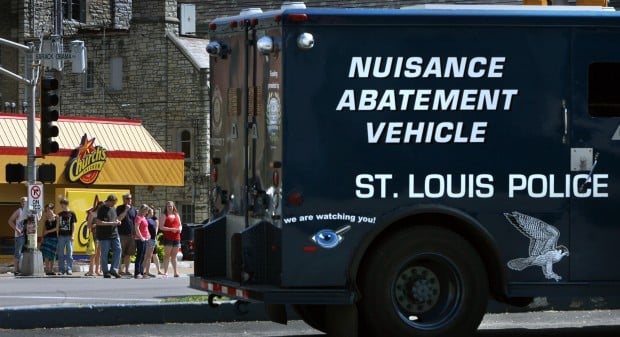 Loop visitors pass a St. Louis crime deterrent vehicle on Sunday, April 1, 2012. The vehicle, nicknamed 'Raptor,' was parked in a gas station parking lot at Delmar and Skinker Boulevards the night before when two men were shot across the street in the parking lot of Church's Chicken.  Photo by Robert Cohen, rcohen@post-dispatch.com 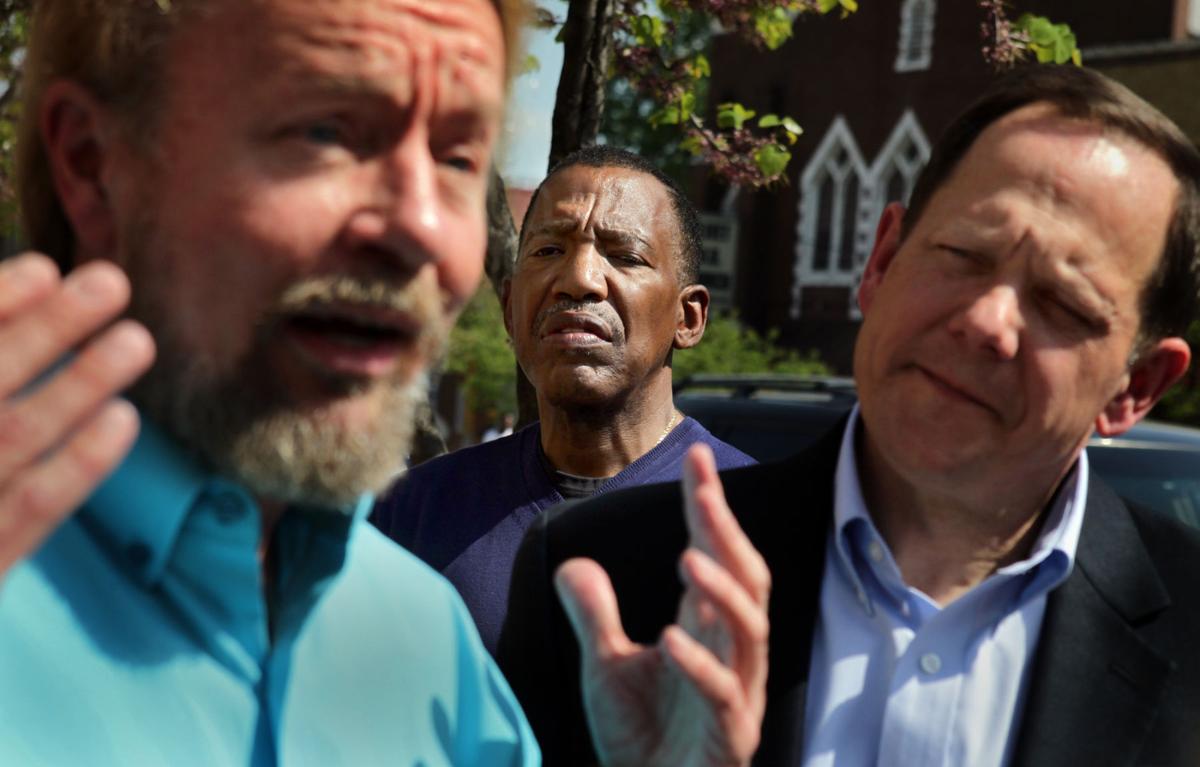 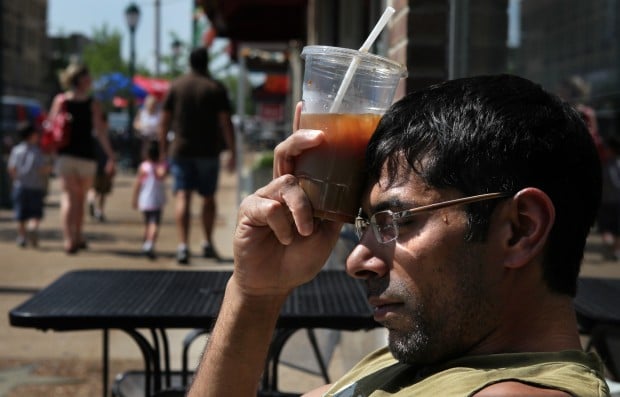 Eric Demello of Brentwood cools off while reading outside Meshuggah Cafe in the Delmar Loop in University City on Sunday April 1, 2012.  Demello, a frequent Loop visitor, was in the district Saturday evening when he saw about three dozen teens being dispersed by police.  "There's a little window in the evening when I feel a little uncomfortable being outside," said Demello, who typically returns after the 9 p.m curfew. Photo by Robert Cohen, rcohen@post-dispatch.com

After a year without any major incidents on the Delmar Loop, the warm weather brought out a large number of young people on Saturday night that led to a disturbance and gunfire, followed a couple of hours later by a shooting that left two people hospitalized.

The events sent some patrons who were sitting outside at nearby bars and restaurants indoors, and asking for their checks.

On Sunday, St. Louis and University City officials met for more than a hour at the Moonrise Hotel to discuss the situation and emerged from the meeting saying that the night's incidents were an anomaly. At a news conference on the sidewalk, they told reporters that the Loop is safe.

St. Louis Mayor Francis Slay said that most of the people who come to the Loop behave themselves but that a "very, very few bad apples" caused a bad situation.

"We will not tolerate bad behavior," he said. "There will be zero tolerance for knuckleheads or anybody that is trying to disrupt the fun and enjoyment that people have here on the Loop."

Officials did not outline any specific plans other than a vow to continue to work together and to monitor law enforcement levels in the popular nightlife district to ensure the Loop is peaceful.

Two years ago, University City adopted an earlier curfew to help stop groups of young people disrupting businesses. Teens under the age of 17 are not allowed to be out without an adult after 9 p.m.

And last spring, police from four departments — University City, St. Louis, Metro and Washington University — stepped up patrols in the Loop after some incidents, including one in which a St. Louis police officer suffered minor injuries after trying to break up a fight near the MetroLink station just east of the Loop.

St. Louis Police Chief Dan Isom said Sunday that the size of those patrols vary depending on the intelligence police officials have. On Saturday night, he said, his department and University City police beefed up their presence — as it has in the past few weeks — in anticipation of an influx of people due to the warm weather.

In addition, he said, there was chatter on social media that young people were planning to show up in the Loop. He said his department had 15 officers in the Loop and University City had about a dozen.

"There was an unusual influx of young people who came out last night, which is out of the ordinary," he said. "Usually it's large crowds, but it's manageable crowds. We anticipated that and had a number of officers here, but unfortunately we had a bad situation."

In the first incident, about 8:30 p.m., a crowd of 200 to 300 young people congregated at Skinker and Delmar boulevards, according to St. Louis police. A St. Louis police "nuisance abatement" truck is stationed at that corner in the Shell parking lot.

Police tried to break up the group, which then dispersed. Some people moved toward Enright Avenue and gathered in the 700 block of Skinker. Fights broke out, and one person fired shots into the air, police said.

About 30 to 40 more officers from various departments responded to the scene, Isom said.

It took about 40 minutes to clear the area, police said. No injuries were reported.

One person was arrested for disturbing the peace and another arrested for a traffic violation after trying to drive through an area officers had blocked off.

Then a little after 11 p.m., shots were fired in the parking lot of Church's Chicken at Delmar and Skinker. A man, 19, was shot under his left armpit, and a teenager, 17, was shot in his abdomen. Both victims were listed in stable condition, police said.

Isom said it's not clear if the two incidents were related.

LeeAnne Gomes, manager of the nearby Pi Pizzeria, said that after a group of about 50 to 60 young people walked by the restaurant about 8:30 p.m., managers stood by the door to monitor the situation. The youths didn't bother patrons sitting at tables outside, she said.

"As it became more heated, some people came inside for a bit," she said, adding that some patrons asked for their checks.

Joe Edwards, who owns many businesses on the Loop, said that since the incident last spring, there hadn't been any other problems in the Loop until Saturday night.

"All summer long it was great," he said. "All fall, all winter, all spring. And now we have one incident in a two-hour period last night. ... Don't let one night paint a picture that's inaccurate."

University City Mayor Shelley Welsch said the events of Saturday night highlight a regional issue about the need to provide places for teenagers to hang out. She also noted that while University City has a 9 p.m. curfew, St. Louis does not.

"There are some challenges with two curfews in two cities where there is no line," she said.

Slay agreed that it is confusing to know when you pass over into St. Louis on the Loop. He said the city's curfew was brought up at Sunday's meeting and would likely be a discussion topic. The city's curfew for youths under 17 is midnight on the weekends, a city spokeswoman said.

Despite the previous night's events, the Loop was once again bustling with activity on Sunday.

Mike Benke of Overland went to Pi for lunch. He said he's never felt unsafe in the Loop — and Saturday's incidents wouldn't keep him from returning.

"In the springtime, things are just going to erupt sometimes," he said.

The man was shot once and is expected to survive, police say.

The trolley project, having amassed almost all the $43 million it needs, is ready to move into high gear.

Surveillance cameras coming to University City side of Delmar Loop

The cameras have been in the works for more than a year and are unrelated to the two shootings Saturday night.

Last Saturday, Facebook was buzzing about the Delmar Loop. Something big was about to happen.

Supporters say it will create a safer environment because criminals will be less likely to strike.

St. Louis police to enforce weekend curfew on Washington Avenue for those under 21

Curfew and street closing to run from 10 p.m. to 4 a.m. Friday and Saturday.

St. Louis police reported about 36,000 crimes to the FBI in the first eight months of 2012. Statistics released by the St. Louis Police Depart…

There were two disturbances, including a shooting, in the Delmar Loop on Saturday night.

A ramped-up police presence already has made the weekends quiter, leaders say.

Some business people in the Delmar Loop remain adamant in pushing for the bill.

St. Louis, U. City officials promise crackdown on unruly youths in the Loop

Loop visitors pass a St. Louis crime deterrent vehicle on Sunday, April 1, 2012. The vehicle, nicknamed 'Raptor,' was parked in a gas station parking lot at Delmar and Skinker Boulevards the night before when two men were shot across the street in the parking lot of Church's Chicken.  Photo by Robert Cohen, rcohen@post-dispatch.com

Eric Demello of Brentwood cools off while reading outside Meshuggah Cafe in the Delmar Loop in University City on Sunday April 1, 2012.  Demello, a frequent Loop visitor, was in the district Saturday evening when he saw about three dozen teens being dispersed by police.  "There's a little window in the evening when I feel a little uncomfortable being outside," said Demello, who typically returns after the 9 p.m curfew. Photo by Robert Cohen, rcohen@post-dispatch.com