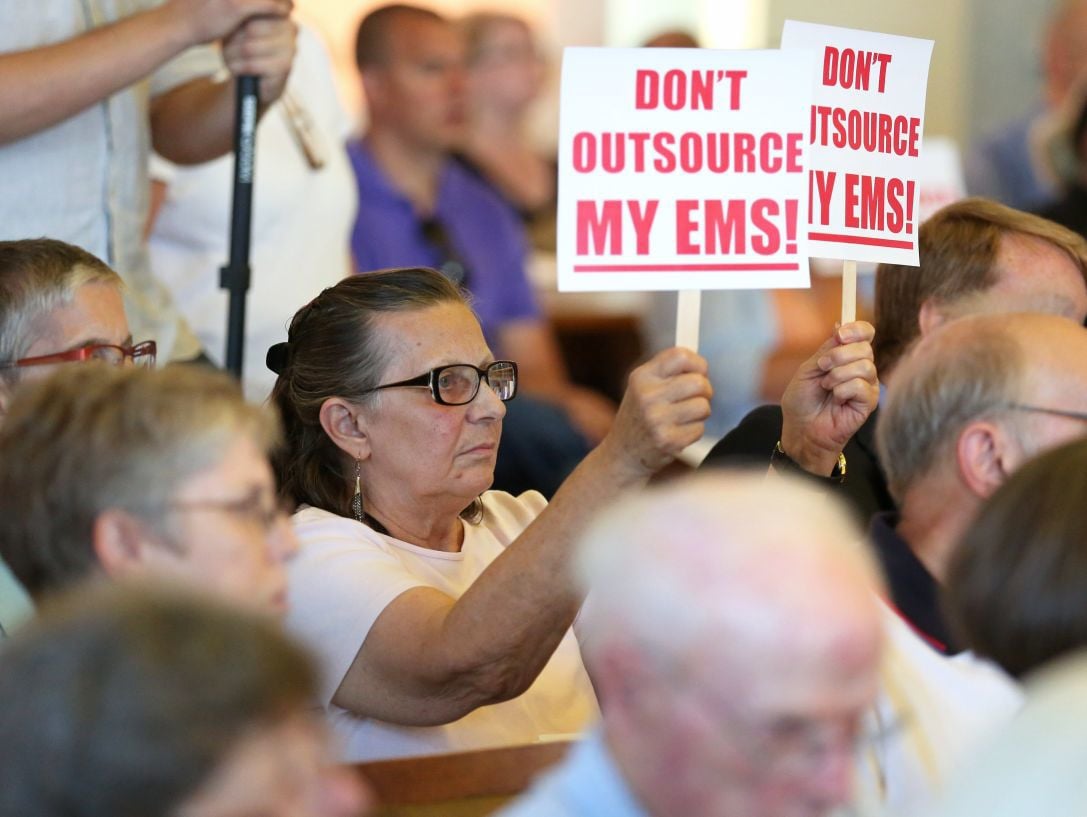 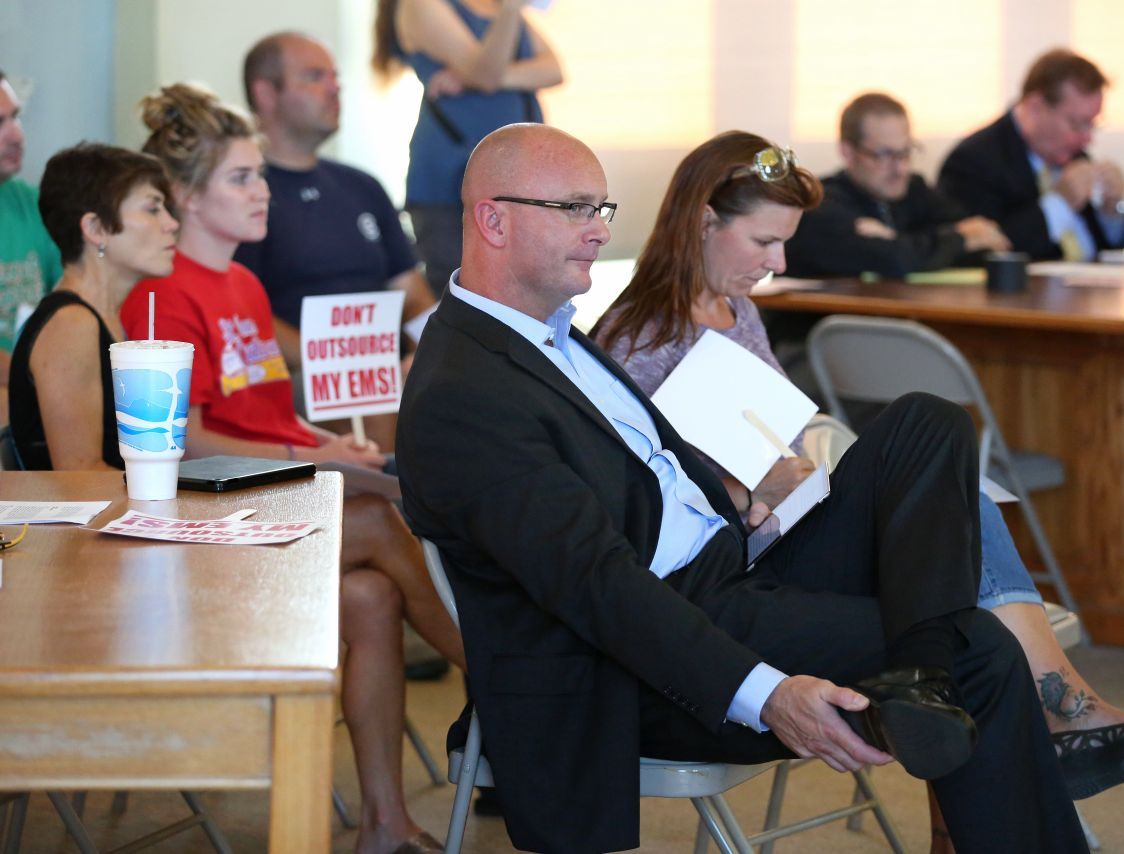 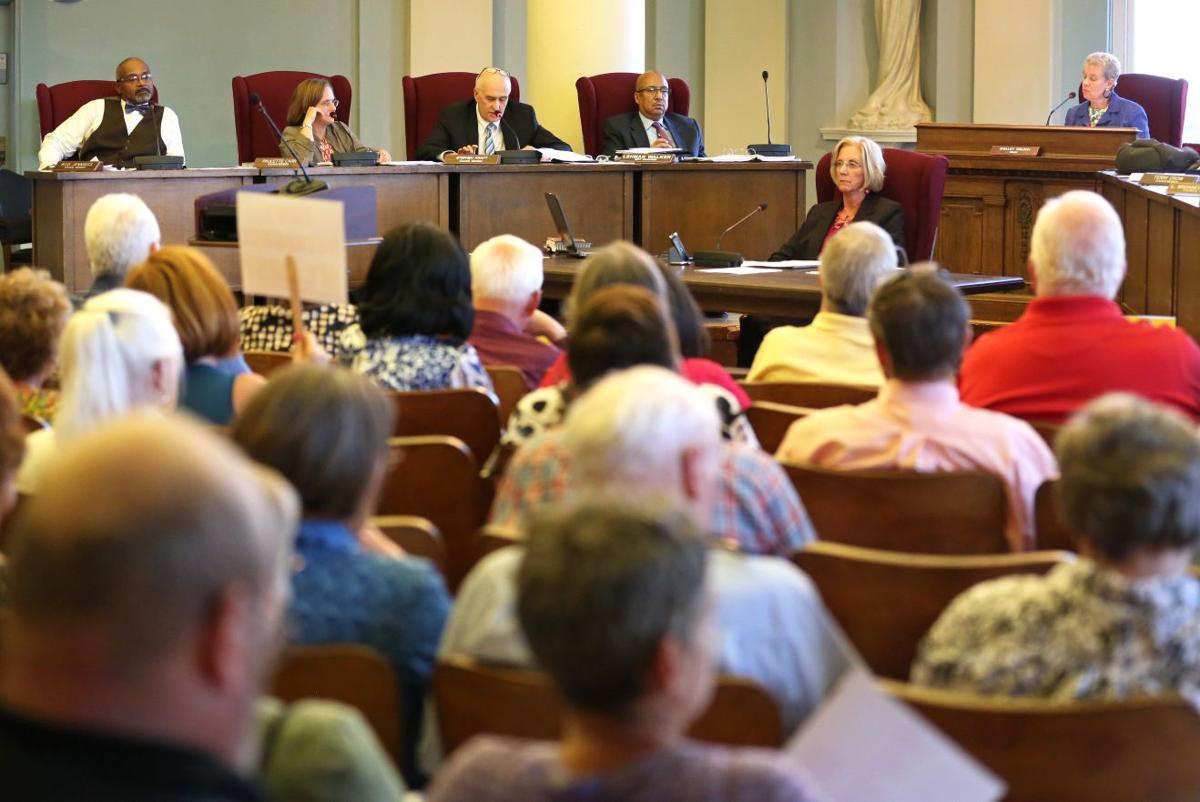 University City City Council members discuss a potential agreement that would outsource emergency services to Gateway Ambulance during a meeting at City Hall on Monday, Aug. 3, 2015. Photo by Roberto Rodriguez 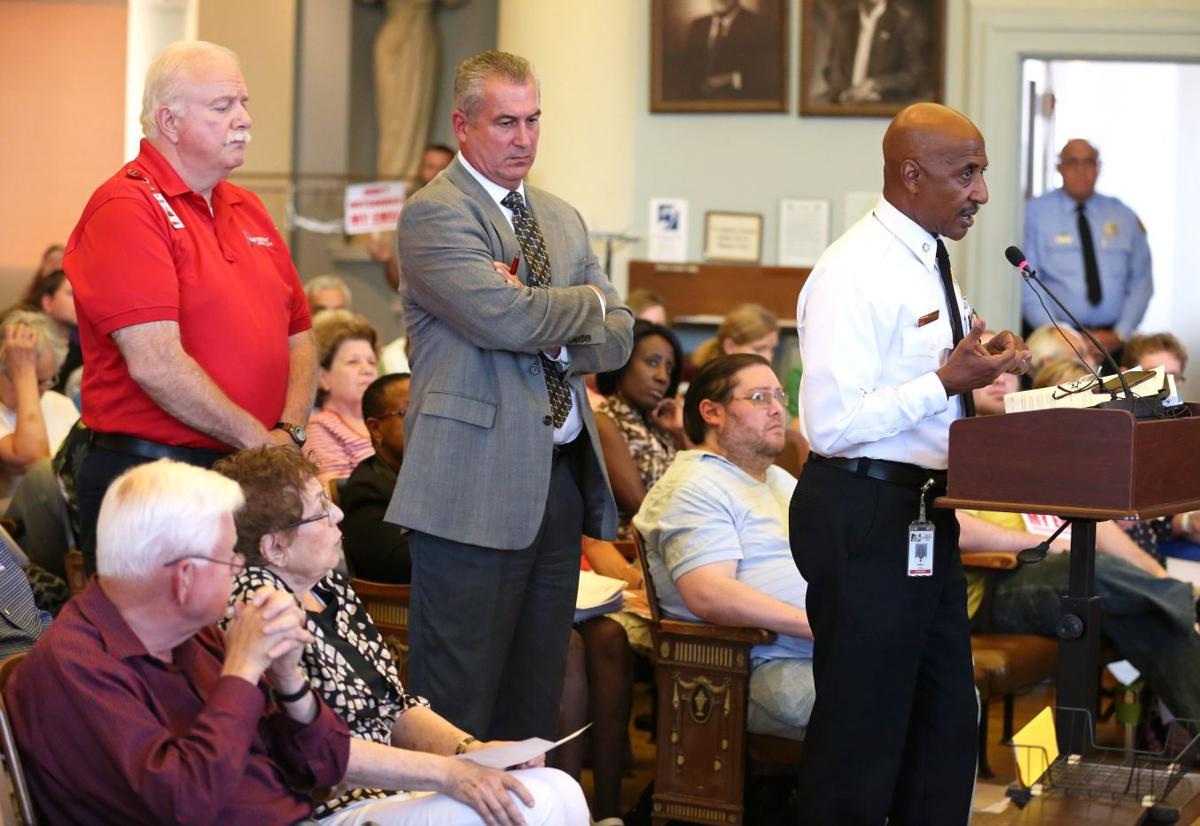 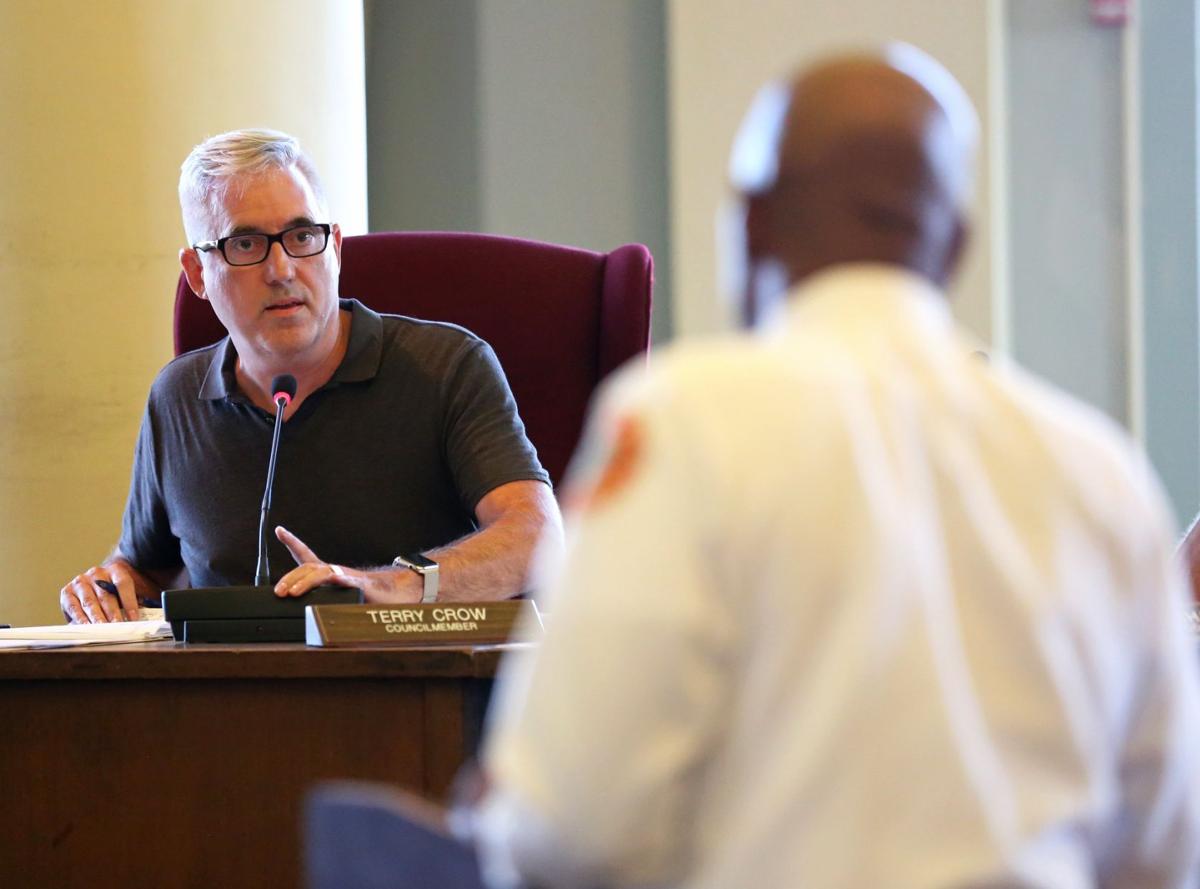 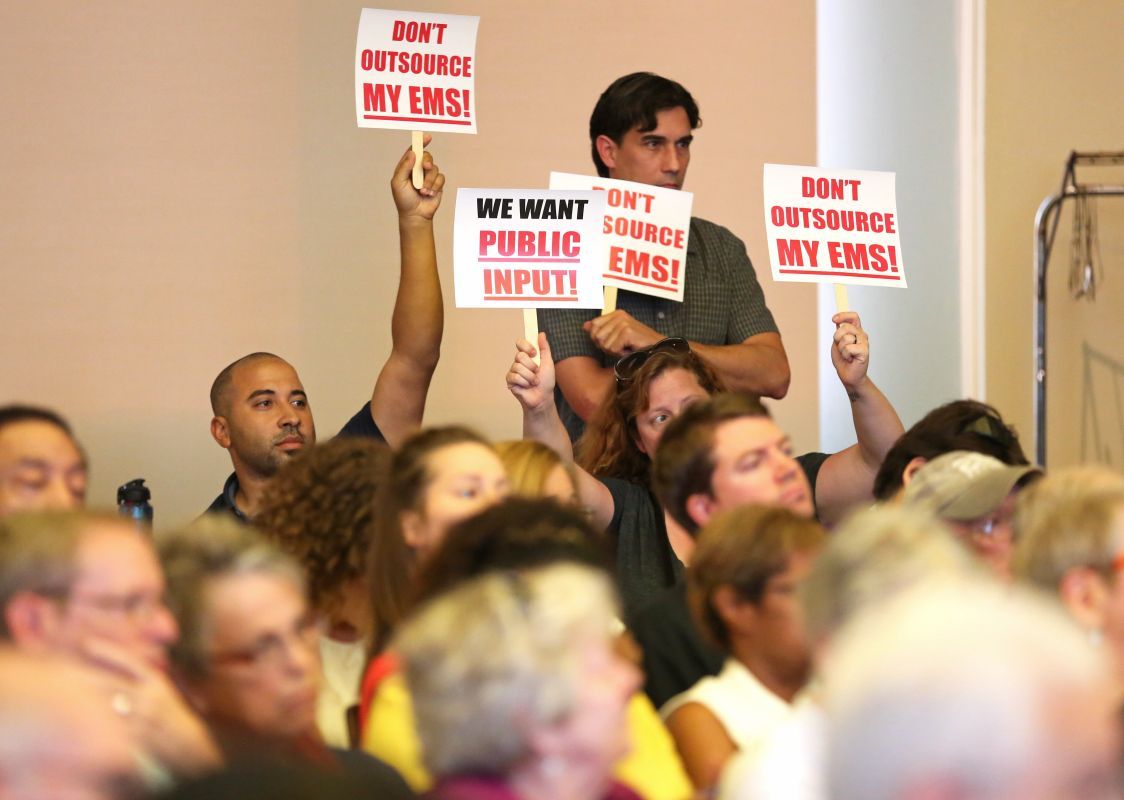 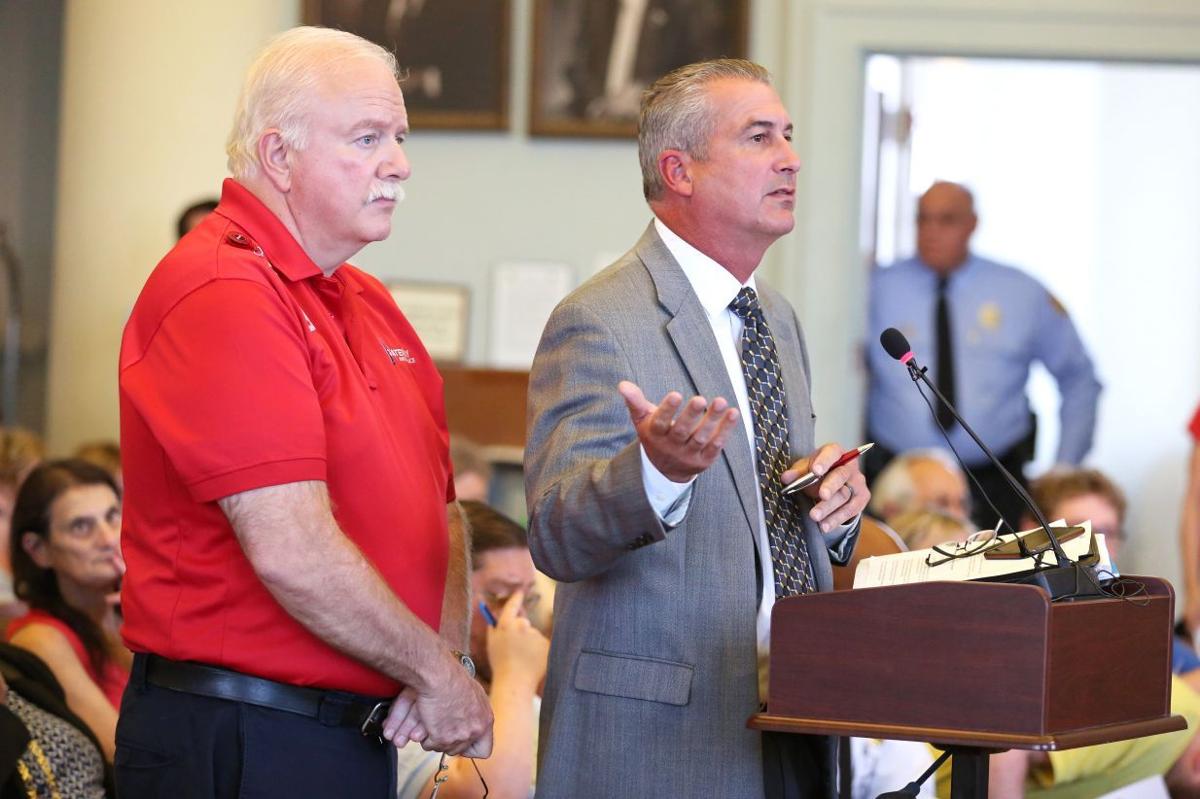 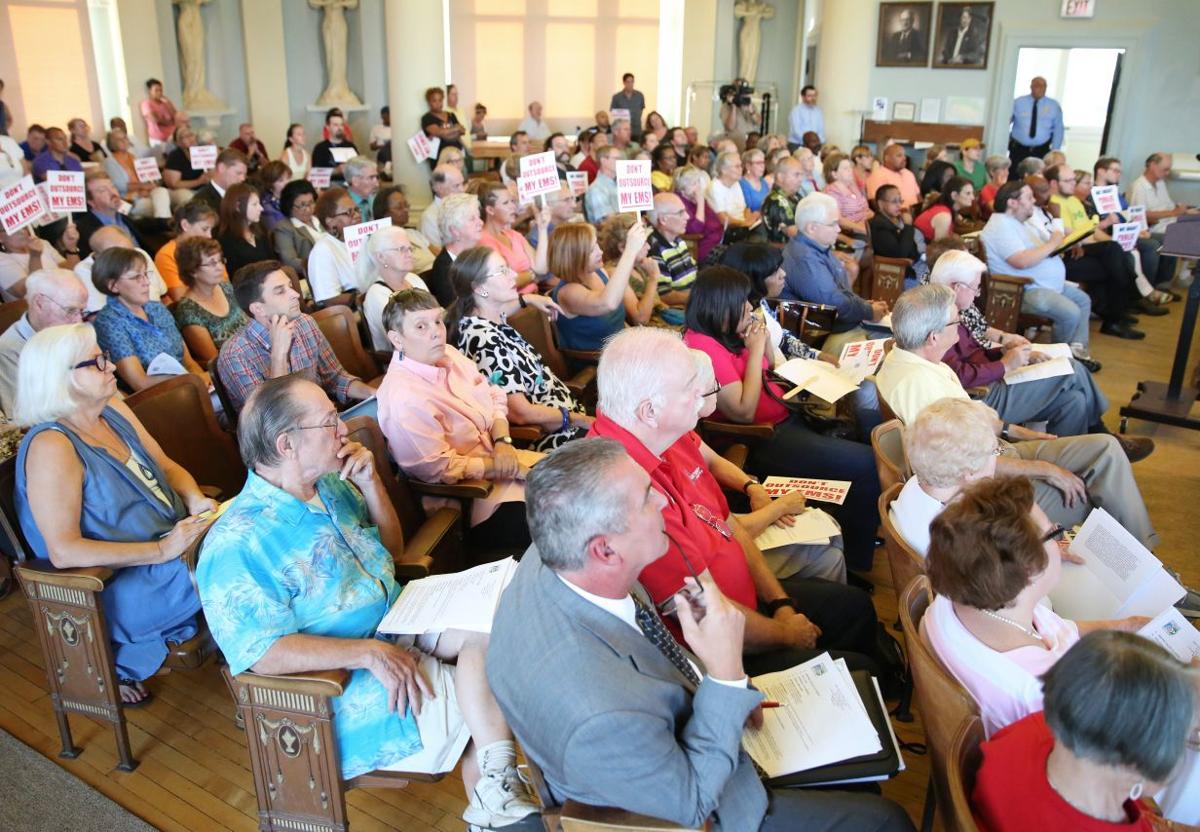 UNIVERSITY CITY • Over an angry citizen outburst for a recall, the University City Council approved on Monday a controversial contract to outsource its ambulance service to a private contractor.

The 5-2 vote ended four hours of contentious debate between residents and the council — as well as council members themselves — over a five-year agreement that will strip emergency medical services from city firefighters/paramedics.

“This is the height of disrespect for all of you,” Councilman Terry Crow told what remained of a crowd that numbered nearly 150 at the start of the marathon meeting.

In addition to objecting to a contract that could transfer first-responder duties to Louisville-based Gateway Ambulance as early as Sept. 1, Crow and Councilwoman Paulette Carr took their colleagues and city officials to task for attempting to enact a last-minute agreement without a proper public hearing.

“We really need time to flush this out,” Carr said.

Residents attending the meeting expressed disappointment that no one beyond City Manager Lehman Walker and a handful of top officials were aware that University City was in the process of striking a deal with Gateway.

Most City Council members learned of the contract when the council agenda packet was delivered to them last Thursday night.

The five councilmen supporting the agreement "clearly stuffed it down the citizens' throats tonight," Crow said after the meeting. "They did it without any input at all from the citizens."

Crow questioned the choice of Gateway Ambulance to replace the city fire fighters on emergency calls.

Citing his own research and responses to inquiries posed at the council meeting, Crow labeled Gateway an "emergency transport service" that shuttles patients "between hospitals."

The company paramedics, he added, have minimal experience as first-responders.

"They are to the best of my knowledge only a back-up" service," Crow said. "And that has to be a concern to all of our citizens."

Carr’s remarks during the meeting were among many sparking prolonged applause from residents — many holding signs opposing the outsourcing bid — who showed up in the council chambers on a steamy summer night.

“They are here not because we knocked on doors or passed out fliers. But because they are scared,” said Carr.

Under the terms of the contract, Gateway will collect the nearly $700,000 the city now receives from individuals and insurance payouts for hospital transport and on-site medical care.

City officials say the outsourcing has the potential to save the municipality about half of its annual $1.1 million emergency medical services budget.

Gateway officials promised Monday that the company would have two ambulances stationed in University City 24 hours a day with two additional units nearby and available for backup service.

“This contract is about higher quality of service at a lower cost,” said Councilman Stephen Kraft, who helped draft the agreement.

Kraft, a physician, said residents would benefit from emergency responses from paramedics working 12-hour shifts as opposed to the 48-hour shifts of city firefighters.

Resident and Republican committeeman David Stokes, a policy analyst with the Show Me Institute, praised Kraft and Walker for the “creative thinking” that led to the outsourcing agreement.

But most residents balked at the proposal.

“I cannot believe a for-profit company can do a better job than the services of the people the citizens of University City have hired,” Loren Grossman said.

Like Grossman, Nancy Pasco was one of several residents who prefaced their remarks with anecdotes about positive interaction with University City firefighters/paramedics.

Resident Dennis Fuller cited a conversation with his daughter, an emergency room nurse, as the basis for his opposition.

“She says there is a distinct difference between the two parties here. And it does not favor Gateway,” Fuller told the council.

Kurt Becker, the head of the union representing University City fire fighters, said his members are "are profoundly grateful for the outpouring of support from the community for our members, and in opposition to the notion that a private, for-profit, out-of-state company with no 911 contracts in St. Louis could provide better service. We are disappointed in the decision of the City Council, but we have no intention to let the citizens of U-City down by giving up this fight."

Kraft said no firefighters would lose their jobs as a result of the privatization. But as many as 12 current fire department positions vacated through normal attrition will probably go unfilled.

In a Facebook post on Monday, Becker disputed the math University City officials relied on to justify the outsourcing.

The public input on the measure was delayed for 30 minutes Monday as the council debated a procedural point to expand the 10 minutes allotted for council members to ask questions about the Gateway pact.

Dismayed that he and Carr hadn’t been consulted on the pact, Crow lashed out after Mayor Shelley Welsch cut him off with an announcement that his line of questions had exceeded the 10-minute limit by “six seconds.”

“To call a question on the rules for a (discussion of) a contract I just received Thursday night is disingenuous, duplicitous and unworthy of your office,” Crow told the mayor.

The slicing and dicing of the University City Fire Department, the decision to privatize the community's emergency medical services, and a captive city council make that city a poster child for municipal consolidation in the St. Louis region.

University City was long considered one of the region's most progressive, diversified and enviable communities. The budget was healthy, services excellent and its government sound and unified.

Dispute over outsourcing of emergency medical transportation headed back to City Council.

University City City Council members discuss a potential agreement that would outsource emergency services to Gateway Ambulance during a meeting at City Hall on Monday, Aug. 3, 2015. Photo by Roberto Rodriguez