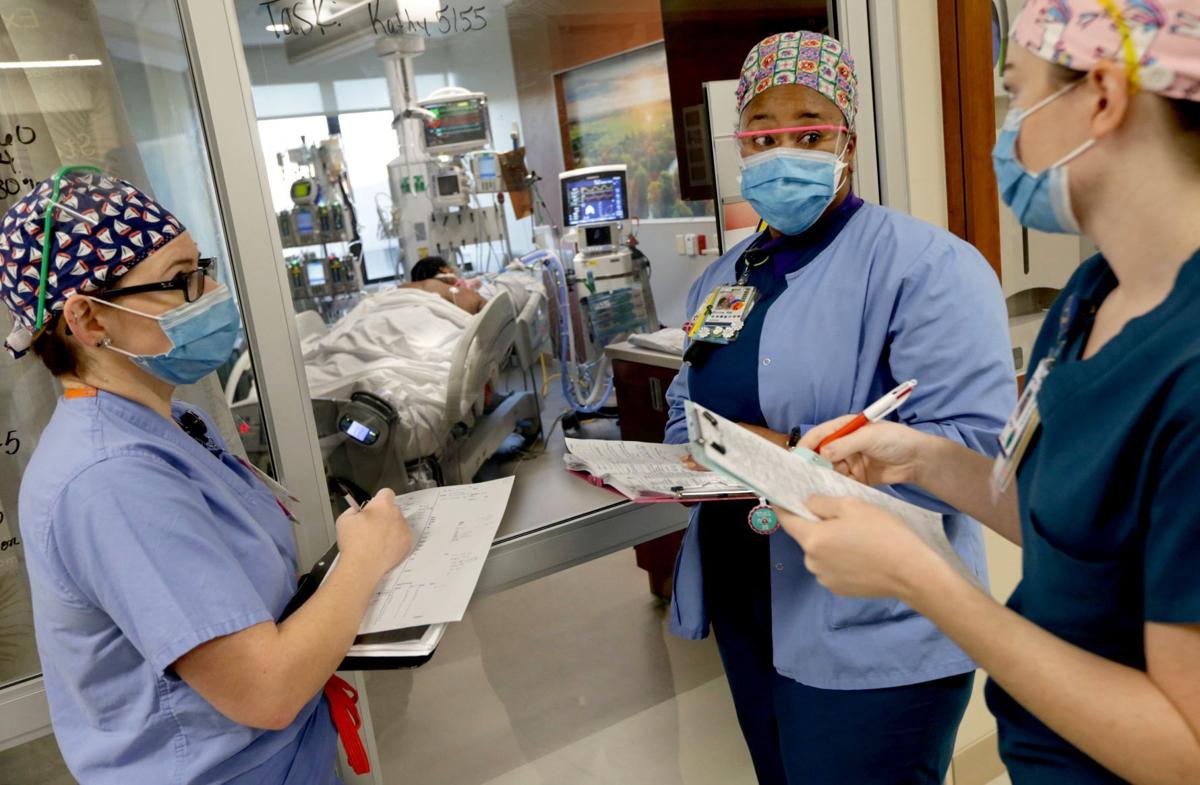 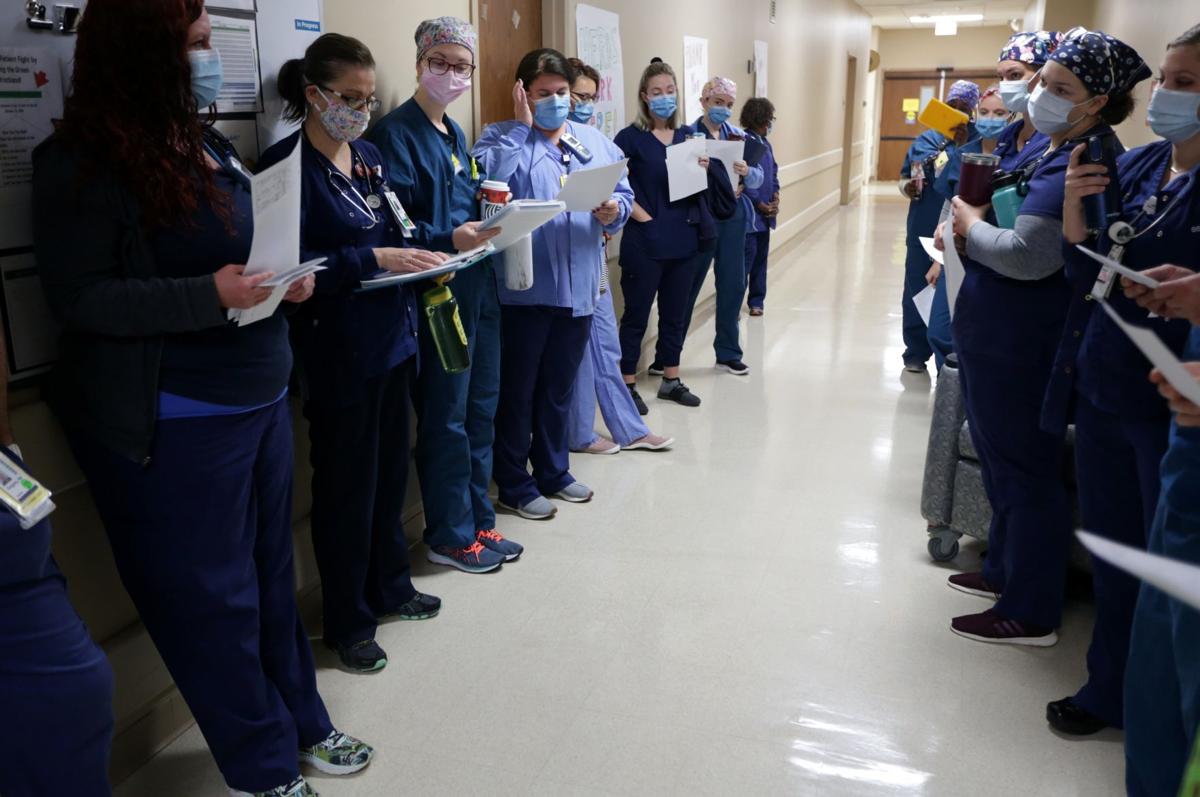 DePaul’s ICU nursing staff gathers for their daily morning huddle at 6:45 a.m. to debrief before starting their 12- to 14-hour shifts on Monday, Nov. 23, 2020. Photo by Laurie Skrivan, lskrivan@post-dispatch.com

ST. LOUIS — Changing how things are done in large hospital systems with thousands of employees and doctors stuck in their ways has been likened to turning a massive ship. It’s usually done slowly.

The new and deadly coronavirus, however, was like an iceberg in a ship’s path: hospitals were forced to adapt quickly and work with each other in ways that greatly changed in just one year how health care is provided.

They monitored the constantly changing safety updates and research — some 80,000 papers published in just one year — and quickly adopted new policies to protect staff and patients.

They scrambled to find testing supplies and protective gear. They monitored spread in the community to predict its impact. They created and staffed intensive care units. They developed systems to vaccinate thousands of people a week.

It was a steep learning curve, said Dave Dillon, spokesman for the Missouri Hospital Association.

“COVID-19 required hospitals to rethink everything,” Dillon said. “From supply chains to visitor policies, the pandemic required flexibility and innovation.”

Garza, the chief medical officer for SSM Health with experience in the military and fighting the H1N1 pandemic as a key figure in the Obama administration, routinely updated the public with live video and helped residents and government officials understand the importance of prevention efforts.

“Our command-center approach has been used for COVID, but today, it is used for just as much outside of COVID,” Ciaramita said. “Our ability as an organization … to make decisions instantaneously, whereas before it could take one month, two months or more. COVID has changed the way we look at all operations in general. I don’t think we’ll ever go back.”

Newfound agility is one of the biggest and lasting changes caused by the pandemic, said Dr. Clay Dunagan, chief clinical officer for BJC HealthCare. “It has raised awareness that big health care systems can move more nimbly than we may have thought.”

Telemedicine, which many providers had been slow to embrace, was suddenly the only option in getting people the care they needed. Providers and patients quickly saw the benefits.

Gone are the days of not calling doctors on weekends, nights or even over the lunch hour. Patients can fill out a digital assessment and be instantaneously referred to a virtual visit or urgent care clinic.

During a recent snow storm, Mercy was able to quickly switch 1,500 of its doctor appointments to virtual appointments. “That capability did not exist one year ago today,” Ciaramita said. “That team-based approach of, ‘How are we offering to take care of patients 24 hours a day, seven days a week?’ That will never go away.”

Other changes include a hyper-focus on infection control, and reduced waiting times to avoid lines and congregating, Mackin said.

“I think it translates to an even safer, better and more effective care for patients inside hospitals,” he said. “We are more efficient in a lot of areas today than we ever were.”

Financially, the hospital systems took a huge hit in the first wave of the pandemic when together they agreed to shut down elective surgeries — allowing them to get caught up on scarce protective gear and testing supplies. Little was known about the extent of spread, and watching hospitals in Italy and New York get overwhelmed and ration ventilators put everyone on edge.

At Garza’s first news conference on April 5, area hospitals had 468 COVID-19 patients. Two weeks later, that number had jumped to 757. Shelter-in-place orders in the St. Louis area kept the average number below 700, and the next month, hospitalizations declined to the lowest levels in the summer.

The pause on electives, however, led to layoffs within Mercy and furloughs across the board. Relief came in various federal emergency funding and stimulus packages, but Dillon says the qualifying rules are complex and variable.

“It has yet to be determined how this will play out,” he said. “Federal guidance on loans, grants and other payment mechanisms introduced early in the response to stabilize the system has shifted over the duration of the response.”

Hospitals were better prepared to respond to the second, larger wave of patients in the fall, when the average number of COVID-19 patients in hospitals hovered over 900 for weeks. Some elective surgeries were postponed, but overall, hospital leaders say they have caught up on procedures, returned to pre-COVID staffing levels and are getting back on solid financial ground.

Harder to measure was the emotional burden on providers as they dealt with initial uncertainty about their own safety, relentless weeks of caring for critically sick patients, enormous loss of life and the strain of being by bedsides instead of patients’ family members.

That burden can’t be emphasized enough, Dunagan said. People refusing to follow prevention measures added another layer of frustration, he added. “It was very hard to be drained from taking care of a population with a high risk of dying, and then to hear those efforts undermined by people who didn’t believe coronavirus was a serious threat.”

To fuel their efforts, health care providers focused on the success stories — the approximately 20,000 COVID-19 patients who recovered and left their hospitals — and support from the community.

“This year has been so different. It created unspeakable challenges,” Ciaramita said. “Yet the rewards and the appreciation from the community … I can’t stress enough of how much that has consistently recharged the batteries.”

Garza said he’s not sure what is next for the pandemic task force, but the members have talked about using their collective power to influence other health outcomes.

“We all recognize that this is a really good thing that we’ve pulled together, and we should use this kind of construct to identify other issues that we could work on together,” Garza said. “People want to continue this partnership once this pandemic is over, because we’ve seen how much we were able to pull together and focus on something that was good for the community.”

A year of the pandemic, and its impacts on hospitals, government, nursing homes and residents, and health departments

The research, led by Washington U., is believed to be the largest comprehensive study yet on long-term complications related to the virus.

Julie Akufuna cried with her fellow nurses. 'There was a lot of leaning on each other.'

Young pastor, tested by COVID-19, makes it home in time for Christmas

The deadly virus sickened family members, and nearly took his life. What the ordeal taught him.

A morning in DePaul Hospital’s intensive care unit as doctors and nurses scramble to save lives.

Running out of room: St. Louis hospitals forced to turn away patients from rural areas as COVID cases soar

Hospitalizations for COVID-19 are at a dizzying, record-breaking climb with no downturn in sight in Missouri.

Knowing the odds of waking up after requiring a ventilator were not good, Mallory Goepel was petrified she’d never see her family again.

They share details from a workday as COVID-19 hospitalizations hit a high point in the region.

While hospital officials are quickly responding to constant updates, they say they are also beginning to think about what they will need if large numbers of people get sick.

Doctor warns area could exceed capacity in hospitals over winter

"This is not a political issue ... this is a threat to public health," said Dr. Aamina Akhtar, chief medical officer at Mercy Hospital South a…

Do you qualify for a third stimulus payment? Use our calculator

Whether you qualify for a stimulus payment, and how much, depends on your income and number of dependents. Answer a few questions below to cal…

DePaul’s ICU nursing staff gathers for their daily morning huddle at 6:45 a.m. to debrief before starting their 12- to 14-hour shifts on Monday, Nov. 23, 2020. Photo by Laurie Skrivan, lskrivan@post-dispatch.com