Was blob on St. Louis weather radar a swarm of migrating butterflies?
0 comments
Share this
Subscribe for $5 for 5 months
1 of 2 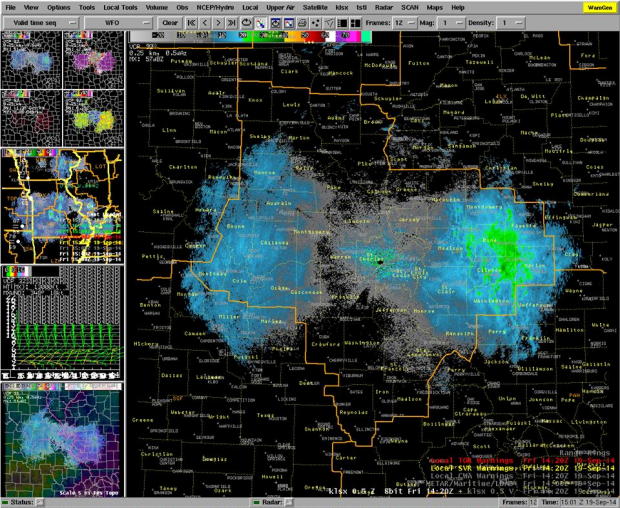 A puzzling radar image shows blobs near St. Louis on Friday, Sept. 19, 2014, when it was clear and dry. Meteorologists think it might show a monarch butterfly migration. The National Weather Service office in Weldon Spring is at the center of the image.

A monarch butterfly in a Post-Dispatch file photo

WELDON SPRING • The radar last Friday morning at the National Weather Service office was picking up something unusual.

The day was bright and clear. No bad weather to explain what forecasters were seeing. The strongest echoes on the radar detected targets that would be the intensity of moderately heavy rain, but it was dry outside.

“It was sort of like a blob,” meteorologist Jon Carney recalls. “Two distinct areas of radar echo. We couldn’t figure out what it was.”

And it stretched from about Columbia, Mo., to Salem, Ill., with the radar showing two gorgeous blue circles on either side of the St. Louis area.

What was it? the Friday crew asked.

It was definitely biological, they quickly concluded. Someone mentioned birds, but the group decided that didn’t fit. The blob they saw with the highly sensitive dual-polarization radar at the Weldon Spring office didn’t match other flocks of birds they’ve seen, Carney said.

They consulted migration maps. They talked with weather experts in other offices. And, after some quick online research, Carney, meteorologist Laura Kanofsky and others on staff that day settled on monarch butterflies. The timing was right for their migration to Mexico.

“That made sense,” Carney explained Tuesday. “We started looking at some of the tracking maps, and sure enough, it seemed like the logical deduction.”

Monarch numbers in Mexico last winter were just 10 percent of the 20-year average, bringing concern over the species. So any news about the butterflies was good news. The crew happily posted about the discovery on the St. Louis office’s Facebook page.

“NWS St. Louis wishes good luck and a safe journey to these amazing little creatures on their long journey south!” the message said. It was shared by the national office and was viewed by thousands of people. The forecasters were buoyed when a few readers said it made sense to them and that they had seen a few butterflies flitting about.

Mystery solved? Not so fast. No one asked the butterfly people.

One expert, Wendy Caldwell, doesn’t put much stock in the forecasters’ butterfly report. Caldwell is the program coordinator for the Monarch Joint Venture at the University of Minnesota.

“If there are enough monarchs migrating through to cover a 200-mile stretch of land at one time, that would be a great thing,” Caldwell said. “But without more evidence, I would be hesitant to believe it. It could certainly be living things. There are many birds that migrate and dragonflies. It isn’t necessarily monarchs.”

Elizabeth Howard, director of the Journey North project, is also skeptical. The project has been tracking migration of the monarch butterfly for 21 years. Howard said the project has 60,000 people who report sightings along the route.

Howard, of Norwich, Vt., saw the story from St. Louis and said the timing for migration is right. But for several reasons, Howard said, she doubts whether monarch butterflies accounted for the blob the meteorologists saw.

For one, the project’s spotters in Missouri and Illinois haven’t been reporting butterflies in large numbers, she said. The butterflies would need to stop and rest, and likely would be spotted, Howard said.

She also questioned the meteorologists’ theory that butterflies explained the strange shape of the radar image, with blobs to east and west and not much to north and south.

But Howard said monarchs don’t flap all that much when migrating. Instead, they soar on the wind.

“The wind is carrying them,” she said. “They are like an eagle. If they had to flap all the way to Mexico, they’d never get there.”

Tad Yankoski, an entomologist at the Butterfly House, was somewhat optimistic. He said monarchs let the wind do most of the work, but do flap some — perhaps enough to explain the radar signature.

He said the wind patterns recorded Friday were perfect for monarch butterflies, and the height off the ground, about 6,000 feet, made sense. But it’s hard to know.

“We may never know for sure,” he said. “A lot of what monarch butterflies do in their migration is still a mystery to people.”

Howard said she has many questions for the meteorologists and would like to talk with them to learn more. For example, she said, what was the temperature at the altitude where the blob was spotted? Howard said butterflies can’t fly if the temperature drops below 55 degrees.

Howard added, “I’m extremely skeptical. Somebody got out of their area of expertise.”

Carney and Kanofsky, the two meteorologists, still say the radar was so unusual that day that the monarch butterfly theory was the best way to explain it.

Once the storms move out, the high temperatures should drop 20 degrees: to about 65 on Friday.

Input, research could take a year.

Monarch butterflies: Why the decline?

The groups say Monsanto's Roundup is culprit in falling population.

A puzzling radar image shows blobs near St. Louis on Friday, Sept. 19, 2014, when it was clear and dry. Meteorologists think it might show a monarch butterfly migration. The National Weather Service office in Weldon Spring is at the center of the image.

A monarch butterfly in a Post-Dispatch file photo