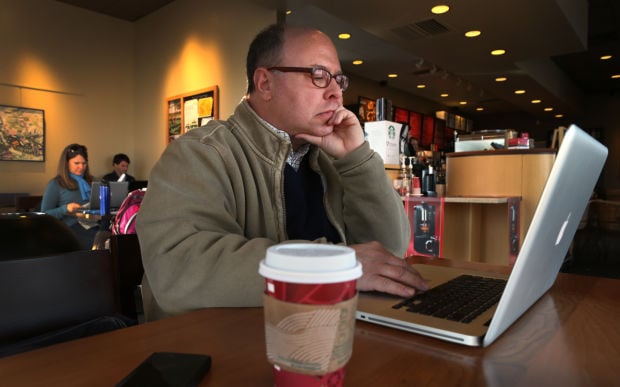 Dan Zimmerman, managing editor of TheTruthAboutGuns.com, works on the website in a Starbucks on Wednesday, Dec. 11, 2013. Photo by Robert Cohen, rcohen@post-dispatch.com 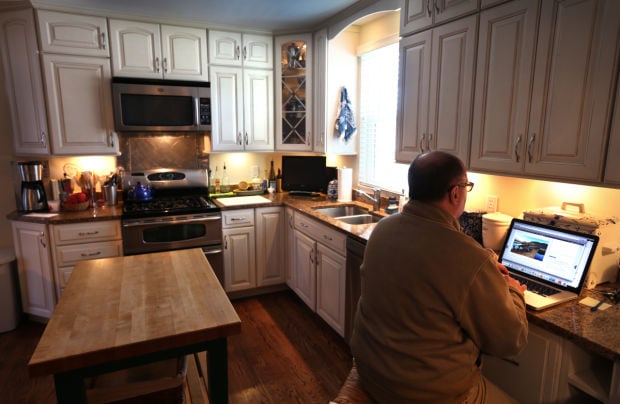 Dan Zimmerman, managing editor of TheTruthAboutGuns.com, works on the website in the kitchen of his Olivette home on Wednesday, Dec. 11, 2013. Photo by Robert Cohen, rcohen@post-dispatch.com 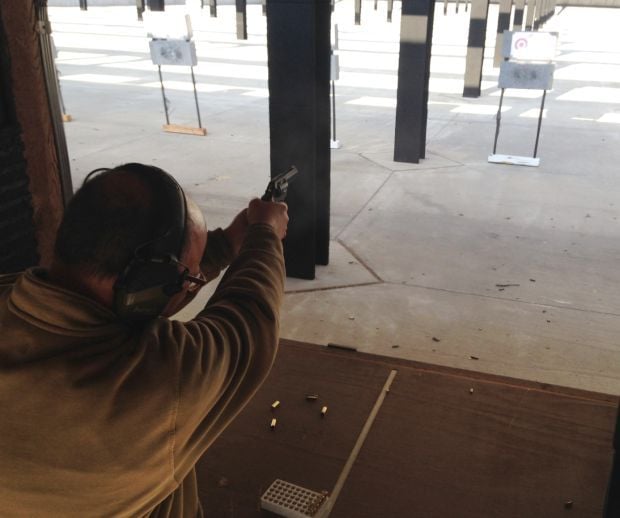 Dan Zimmerman of Olivette, managing editor of TheTruthAboutGuns.com, takes aim at a gun range run by the state conservation department in High Ridge on Dec. 4, 2013.

He looks like a guy who might work in accounts receivable, which is what this Olivette resident did for years. He is 53, balding, wearing tortoise shell glasses, carrying a little extra weight and dressed in the beige tones of business casual. He smiles easily. He is working on a laptop at a back table.

He also might be packing heat. Could be his .38 snubby. Maybe his Kahr 9 mm. He won’t say.

“I really don’t talk about that,” he says.

That’s surprising. Because Zimmerman loves to talk about guns. And he loves talking about gun rights, which he worries are under attack, especially in the one year since the massacre at Sandy Hook Elementary in Newtown, Conn., where a gunman killed 26 people, including 20 children. That only reinforced Zimmerman’s views.

“It was pretty much like every other mass shooting — it happened in a gun-free zone. I think it would’ve been different if he’d been in a place where someone else was armed,” he says. “I don’t know how you could argue otherwise.”

Until the last couple of years, Zimmerman had given little thought to gun rights. Now, he is managing editor and CEO of TheTruthAboutGuns.com, a popular blog that wields considerable influence in the gun-rights world.

Consider this: Last month, the site went after a longtime writer at Guns & Ammo magazine — considered the gun industry’s bible — for a column saying he was OK with mandatory firearms training for a concealed-carry permit. To many, that’s a reasonable position. But the blog stoked public outcry. The writer was fired. Guns & Ammo’s editor resigned. Zimmerman says the magazine should have known better than to publish that.

“It’s all incrementalism,” he says. “Eventually they’re going to get your guns, too.”

Zimmerman believes almost anyone should be able to carry any firearm, “even fully automatic.”

But here, in Starbucks, he faces a problem. The coffee chain once allowed customers to carry firearms in its stores, based on local laws. Then, in September, after another mass shooting, this one at the Washington Navy Yard, where 13 people died, Starbucks changed its mind. It asked customers to leave their guns at home.

Zimmerman didn’t grow up around guns. He was raised in Clayton. His parents didn’t own firearms. His friends didn’t hunt. The first time he shot a gun was in his teens. A friend let him plink off some rounds from a small rifle during a vacation in the Ozarks.

He didn’t touch a gun again for two decades. In his mid-30s, he shot clay targets in Vermont. He loved it. He came home and bought a shotgun. His wife supported his interest, but she never got into it. Their son did. Zimmerman took his son shooting. Zimmerman bought a handgun a few years later. He got his concealed-carry permit.

He was just another gun owner in a country with the world’s highest gun ownership rate. He kept his corporate day job. Then he joined a startup, which failed, and he was unemployed.

In early 2011, he stumbled on TheTruthAboutGuns.com. The blog had been started a year earlier by Robert Farago, a businessman in Providence, R.I., who had just sold another site, TheTruthAboutCars.com.

Zimmerman emailed him. They began corresponding. They hit it off. They were nearly the same age. They were both Jewish. They both had come to guns later in life from families that didn’t share their views. Farago thought Zimmerman was an amazing writer — funny and sarcastic. He asked him to start writing for the blog.

“Dan is proof that great bloggers are born, not made,” Farago says.

Zimmerman’s first post, in April 2011, worried about the potential for White House gun regulations. Back then, fear was being driven by the January 2011 shooting in Tucson, Ariz., when a gunman shot 19 people, including then-U.S. Rep. Gabrielle Giffords.

Zimmerman wrote more posts. He started editing. Farago gave him a salary and named him managing editor. It was a full-time job. Six months ago, Farago gave Zimmerman a new title — CEO — and a minority ownership stake in a company that had expanded from the blog to include the production of a firearms festival near Austin, Texas, which is expected to make its debut next November.

They also plan to pitch a reality series based on the blog. In one episode, filmed last year, Zimmerman hunted for the first time. He bagged a nine-point buck. He has the trophy picture on his iPhone. Now, sitting in Starbucks, he punches it up.

“I don’t think my mom has seen this photo,” Zimmerman says.

He knows not to discuss guns with his family. “Better to leave an uncomfortable topic alone than get into the whole thing,” he says.

But he remembers telling his mother he was going to work for Farago’s blog.

The blog had 5.6 million page views last month, according to Farago. Traffic has subsided a little after a massive spike following Newtown and a push for new federal gun regulations. The blog, supported by advertising, breaks even, Farago says.

On the blog’s “About Us” page, Zimmerman’s photo stands out.

He was, until recently, the only person not posing with a gun. Zimmerman instead posed with an Elvis impersonator and a showgirl.

The photo hints at something about Zimmerman’s role: While the posts and comments often strike a defensive, even angry tone, he tends to write in a teasing way, on topics such as when a school suspends a student for innocently making a gun with his fingers.

Still, he agrees with the blog’s worldview abhorring any gun regulation, no matter how small, and those who push for it. Zimmerman describes himself as “pretty close to a 2A absolutist” — online-speak for believing the Second Amendment right to bear arms should not be limited in any way.

“You would think we would be able to reach an accommodation at some point,” he says of people like him and those who want greater gun control. “But you can’t.”

Many of the tougher posts are written by Farago, who moved to Austin, Texas, earlier this year because, he says, he needed to flee the Northeast’s gun restrictions and his increasing notoriety there.

He has targeted one group in particular: Moms Demand Action For Gun Sense in America. The group is new. It was created the day after Newtown by a mother outside Indianapolis. It has spread across the country to push for gun-control legislation. On Saturday, the anniversary of the school shooting, Moms Demand Action plans to hold vigils, including one in St. Louis outside Central Reform Congregation at 11:30 a.m.

On the blog, Farago called the event “anti-gun agit-prop” from “our most formidable adversary.”

Her organization regularly clashes with them online and on the streets. A commenter on TheTruthAboutGuns.com once posted her home address. The post is still there. Last month, a Moms Demand Action meeting in Arlington, Texas, was met by a gun-rights group openly carrying rifles in the parking lot. In Texas, you can carry a long gun on your shoulder.

“They were trying to intimidate,” Watts says. “They are trying to normalize things that aren’t normal.”

Farago accused Moms Demand Action of blowing the incident out of proportion.

Zimmerman says he is unsure if people carrying guns on their shoulders helps the gun-rights cause. But he supports them.

“Especially in the last year,” he says, “gun owners have been the target of vitriol and accusations.”

Zimmerman is going shooting. He takes along a Post-Dispatch reporter. He pulls into the parking lot of a shooting range in High Ridge run by the state conservation department.

A nearby car boasts a “Don’t Tread On Me” bumper sticker. Another has an NRA logo. The bumper of Zimmerman’s car is bare. He opens the back and pulls out three shotguns and three handguns. One of them is a customized Ruger SP101 with a polished wood handle. Farago gave it to him as a gift. Zimmerman calls it his “barbecue gun,” as in, it’s dressy enough to show off.

All of the guns are bagged. The shotguns have trigger locks. Zimmerman wears ear guards and eyeglasses. He runs through a gun safety checklist.

He shoots flying clay targets first, then moves to the shooting range. The range is busy on this recent weekday afternoon. He is a good shot. Sitting on a long wood bench with other shooters as the paper targets are collected, he argues the merits of unrestricted access to guns. The conversation is loud enough to be heard over the muffling ear pieces. If other shooters notice, they don’t show it.

Zimmerman calls the second amendment “a check on the aggregation of power and subsequent abuse.” Guns mean he can protect himself and his family. “I’m sure I’ll never have to,” he says, “but I want the ability to if anything were to happen.” And, in his view, gun regulations stop only law-abiding people from getting firearms.

He looks at what happened a year ago in Newtown and is horrified, but reaches the conclusion that more guns, not fewer, is the remedy.

“I’m willing to risk the bad outcomes,” he says, “because they are vastly outweighed by the good.”

Your article on gun rights blogger Dan Zimmerman ("Why is a nice guy like Dan being boss of a very pro-gun website?" Dec. 13) was an ominous w…

Paper shows disdain for those who support Second Amendment

Regarding the headline “Why is a nice guy like Dan being boss of a very pro-gun website” (Dec. 13):

I read the article titled "Why is a nice guy like Dan being boss of a very pro-gun website?" (Dec. 13) and I was disturbed by more ways than y…

NRA's vision of polite society is rooted in fear

Why Adam Lanza went to Sandy Hook Elementary School and slaughtered more than two dozen children and educators before he killed himself may never be known.

The life-altering encounters  leave some shooters grappling with questions, and one carries doubts.

Shooting on Nov. 13 left off-duty officer with gunshot wound to his leg.

Dan Zimmerman, managing editor of TheTruthAboutGuns.com, works on the website in a Starbucks on Wednesday, Dec. 11, 2013. Photo by Robert Cohen, rcohen@post-dispatch.com

Dan Zimmerman, managing editor of TheTruthAboutGuns.com, works on the website in the kitchen of his Olivette home on Wednesday, Dec. 11, 2013. Photo by Robert Cohen, rcohen@post-dispatch.com

Dan Zimmerman of Olivette, managing editor of TheTruthAboutGuns.com, takes aim at a gun range run by the state conservation department in High Ridge on Dec. 4, 2013.