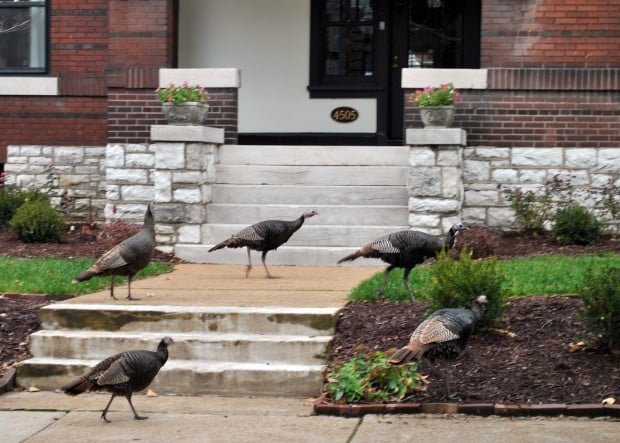 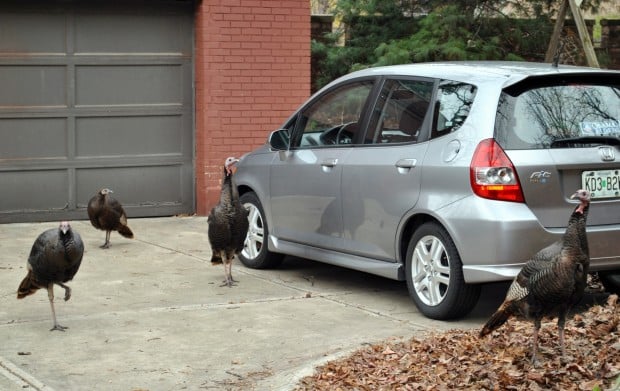 ST. LOUIS • Wild turkeys? Outside my house? Martin Schweig didn't believe his neighbor when she called him recently with the news. Just look, Martin, she insisted. Those are wild turkeys.

"I thought she was hallucinating," Schweig, 88, recalled.

He has lived for decades in the city's dense, urban Central West End. He's a retired photographer. He's an ardent animal lover. Strange is nothing new to him. He once kept eagles in cages in his backyard and even, briefly, a lion. He once caught a zoo peacock on the lam in his neighborhood. But wild turkeys, those were something he'd seen only in the Ozarks.

Schweig looked outside. He spotted five wild turkeys, big as toddlers, strutting on front lawns and walking by parked cars, as if it were the most natural setting for giant birds.

He's right. Wild turkeys are not usually found in cities. They range over forests and rural fields. They threatened to disappear entirely from the state in the 1960s, when a loss of habitat and increased hunting had whittled their number to 3,000. Now, there are about 500,000 wild turkeys, a healthy number, said the state conservation department. The birds today can be found in every Missouri county and parts of the Metro East. Apparently, even the city of St. Louis.

Other U.S. cities have reported wild turkeys in recent months, including a Detroit suburb and Minneapolis. On Staten Island, N.Y., the number of wild turkeys has reached the point where some residents call them a nuisance.

Wild turkeys are still curiosities in St. Louis. Schweig saw the birds in the 4500 block of Pershing Place a couple of weeks ago. A jogger saw them this week on Westminster Place near North Newstead Avenue. Several others reported seeing the turkeys on nearby residential blocks. Nicki Dwyer, who runs the blog Nicki's Central West End Chronicle, has been detailing the sightings.

"People have been very excited about it," Dwyer said.

Wild turkeys are distinct from domestic turkeys, with a more athletic build and darker-colored feather tips.

Male wild turkeys, known as gobblers or toms, have red and blue heads and a short spur on their lower legs. They can grow to 30 pounds.

Female turkeys, known as hens, are typically about half as big. The gobbling begins in earnest in March and April as toms woo the hens.

Wild turkeys are not a threat to people or pets, "although I suppose if you corner one, they do have those spurs," said Dan Zarlenga, a media specialist with the state conservation department, who noted that he recently saw two wild turkeys along Highway 94 in St. Charles County.

One possible source of the urban wild turkeys is Forest Park, just a few blocks — and a very busy Kingshighway — from Schweig's neighborhood. Mark Glenshaw, an amateur naturalist who spends many days looking for wildlife in the park, said he had seen owls, bald eagles, muskrats, minks, egrets and chipmunks there.

But it has been awhile since he's seen a wild turkey.

Turned out, as unlikely as it might seem, he was looking in the wrong place.

EDITOR'S NOTE: An earlier version of this story incorrectly reported the length of time since Mark Glenshaw saw a wild turkey in Forest Park.

$3.3 million bird-watching center is part of effort to promote nature tourism near the confluence.

The St. Louis area, being smack in the middle of the Mississippi Flyway, is a great place for bird-watching no matter where you are. That bein…

"It was extremely aggressive, viciously wild and screaming at me," trapper says.