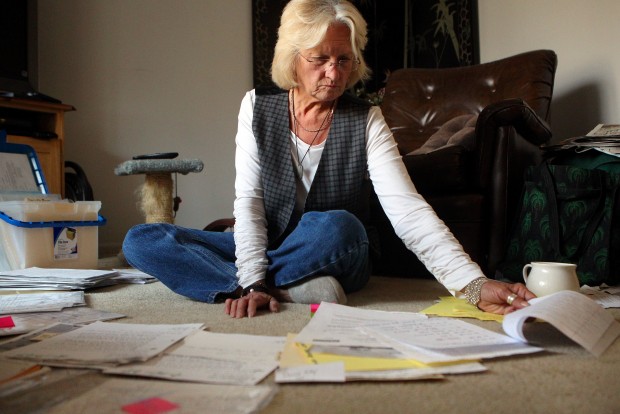 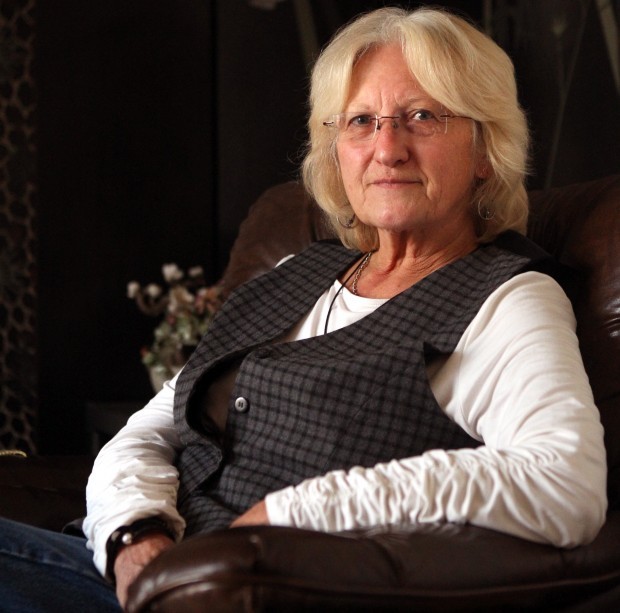 Karin Whorton, 65, thought herself an American citizen. But a trip to renew her Missouri driver's license began what has become a years-long odyssey for the daughter of an Austrian World War II war bride to prove it. She was brought to the United States by her mother when she was 16 months old. Photo by Christian Gooden, cgooden@post-dispatch.com 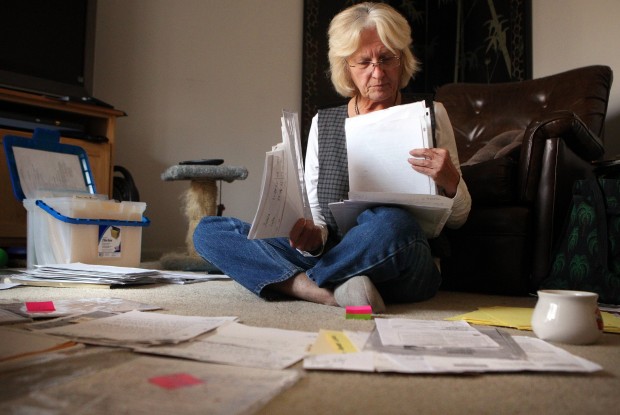 For most of her 65 years, Karin Whorton thought herself as American as apple pie.

She grew up in Blair, Neb., graduated from high school in Council Bluffs, Iowa, married, then moved to St. Louis in 1972. Seven years later, she divorced, went back to school and has since built airplanes. At one point, she said, she carried a secret government clearance to help work on a stealth fighter jet.

In December 2004, Whorton said, her employer, GKN Aerospace, notified her that to continue to work on government contracts, she needed to prove she was a U.S. citizen.

"I said, 'I am,'" said Whorton, who lives with her husband in Maryland Heights. "They said, 'You need to get some proof of that.' I had to have a piece of paper that said that."

Thus began what has become a years-long quest by Whorton to prove she is American.

Whorton arrived in the United States in April 1948, the 16-month-old child of a war bride married to an American who had served overseas and who raised Whorton as his daughter. Whorton's Austrian-born mother was naturalized in 1952 and her mother told Whorton that she had been as well.

After being approached by GKN, where she helps assemble the F-18 Super Hornet, Whorton provided the company with a copy of her Austrian birth certificate and her mother's naturalization papers.

That seemed sufficient until July 2005, when she said company officials told her she needed a U.S. government-issued proof of citizenship.

She applied for a passport but was denied. She said she spent more than a year calling the U.S. Citizenship and Immigration Services' toll-free telephone number trying to sort things out.

"There were no two people that gave me the same answer twice," she said. "It was insane."

In 2008, Whorton applied for certification of citizenship from Citizenship and Immigration Services.

That September, the agency notified her that no immigration files could be found for her or her mother and she would need to provide additional information, including the originals of her birth certificate and her mother's naturalization papers. Whorton said, to her knowledge, those documents do not exist.

In January 2010, Whorton went to the agency's office in the Robert A. Young federal building in downtown St. Louis determined to get things straightened out.

"It was the first time I met with anybody face to face," she said.

Whorton said an office worker gave her a list of documents she needed to submit and directed her to Sen. Claire McCaskill's office for help in obtaining them.

As months went by with no progress, Whorton again met with a local agency official, who she said suggested that her mother might have smuggled her into the country. The official asked for proof she wasn't in the U.S. illegally, she said.

"I thought they were being ridiculous," she said.

She hired a private investigator. Within 24 hours, the investigator located a Pan Am flight manifest and evidence of Whorton's lawful entry, she said. She took the information to the agency's St. Louis office where she said she was told her mother's file had been found, sent to the St. Louis office and returned, but would be requested again. She said she was told she would be notified when it arrived.

On a subsequent visit, Whorton recalled, officials told her they had found her birth father's file, which she was allowed to view.

About a year ago, Whorton went to renew her drivers license and was asked for proof of citizenship, she said. During her efforts to get that resolved, she learned from a Missouri Department of Revenue official in Jefferson City that her mother's immigration file was sitting in the local Citizenship and Immigration office. Whorton said local Citizenship and Immigration officials denied her request to see the file, even though, she pointed out, they had allowed her to look at her birth father's immigration file and even gave her photographs from it. At that point, she said they denied ever giving her access to her father's file or photographs. She's still not certain why.

She said immigration officials told her that her mother's file did not clear up her citizenship status and that they could provide no further assistance.

They told her she now needed to file for a right to work permit and a request for permanent resident status. To Whorton, it all seems absurd.

"I do not believe that after living my entire life in this country that I'm being treated like I just got off the boat," she said.

An agency spokesman said he could not discuss individual cases, but said cases involving the children of naturalized citizens can be "a highly complex issue."

Laws regarding such cases were simplified in 2001, according to the agency. If a child's parent becomes a U.S. citizen before the child turns 18, the child is automatically a U.S. citizen. But the law applies only to children born after Feb. 28, 1984.

"She's caught in a trap," said Crystal Williams, executive director of the American Immigration Lawyers Association in Washington. "She's got a problem where she's trying to prove she's a citizen and she can't.

"There's also no presumption in the law that because she's been here 60 years that she's a citizen. It's just a very fuzzy thing."

Whorton said her employer has been understanding about her efforts to document her citizenship.

A few months ago, Whorton said, she applied for Medicare with no problems.

Her biggest worry is whether things will go as smoothly with her Social Security, which she hopes to start drawing in another year. Just because one government agency recognizes her as a citizen doesn't mean another will.

Regardless, Whorton said there should be no doubting her Americanism.

She proudly points out that she loves fireworks and the Fourth of July. She married not just one veteran, but two.

But when it comes to dealing with the government bureaucracy, she's about had it. She's thinking about hiring an attorney.

"I'd rather give my money to a lawyer than the government," she said. "If that isn't American, I don't know what is."

Illegal immigrants in U.S. have put down roots

More than 60 percent of adult illegal immigrants in the U.S. have lived here for at least 10 years and nearly half have minor children, accord…

Fugitive since 1975 is given four more months in jail

He was involved in beating at hotel in Bridgeton in 1974.

Some of the records will be shown at a free public forum Tuesday at the new National Personnel Records Center in Spanish Lake.

When Rohan Coombs joined the U.S. Marine Corps, he never thought one day he would be locked up in an immigration detention center and facing deportation from the country he had vowed to defend.

Karin Whorton, 65, thought herself an American citizen. But a trip to renew her Missouri driver's license began what has become a years-long odyssey for the daughter of an Austrian World War II war bride to prove it. She was brought to the United States by her mother when she was 16 months old. Photo by Christian Gooden, cgooden@post-dispatch.com