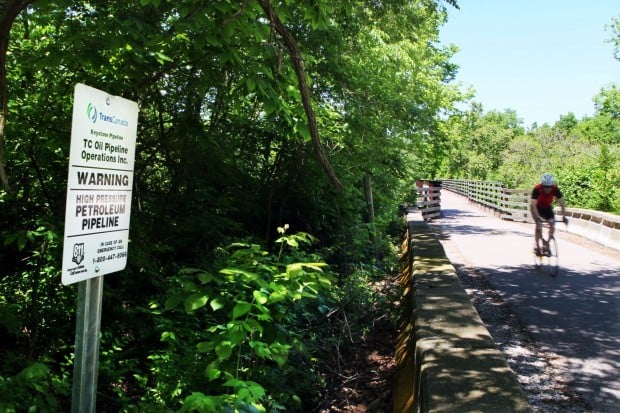 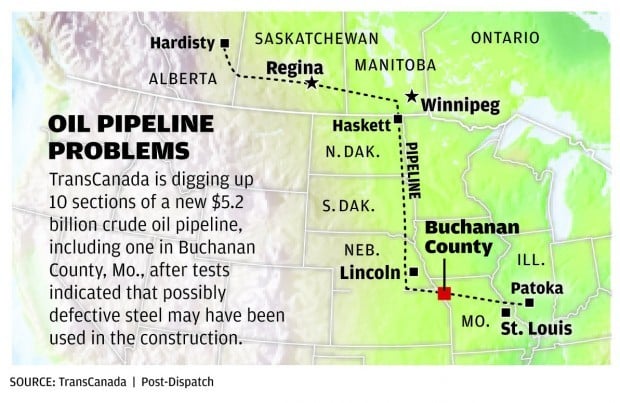 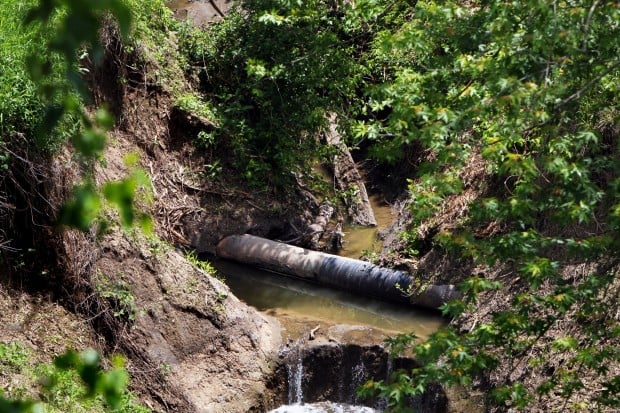 May 6, 2010--- This pipe runs through an area cleared for the Keystone pipeline in Edwardsville. The Keystone pipeline will carry crude oil from the Canadian tar sands in Alberta to the Wood River refinery in Roxana and on to Patoka, Illinois. The pipe is shot from the Madison County Transit Watershed Trail in Edwardsville, a sign on the trail identifies this area as carrying the pipe. Emily Rasinski erasinski@post-dispatch.com 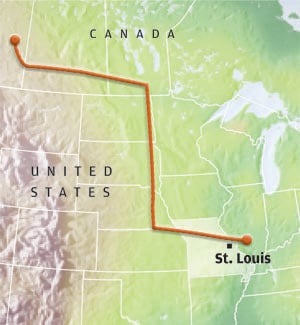 TransCanada is digging up 10 sections of a new, $5.2 billion crude oil pipeline, including one in Missouri, after government-ordered tests identified possibly defective steel may have been used in the construction.

Federal regulators mandated the excavations, forcing the company to inspect portions of line to determine whether any must be replaced and whether additional digs are needed.

The Keystone pipeline stretches 2,151 miles from Alberta's Athabasca tar sands to the ConocoPhillips' Wood River refinery in Roxana, then on to Patoka, Ill. One of the longest and most expensive pipelines ever built in North America, Keystone can carry about a half-million barrels a day, enough to supply about 2 percent of the country's daily demand. Oil began reaching the refinery in late June and will continue to flow during the work.

A TransCanada spokesman on Thursday repeated assurances that the pipeline is safe.

The government ordered the inspections after problems with substandard steel surfaced in several other projects. An investigation revealed that several pipelines built during a construction boom from 2007 to 2009 contained significant amounts of defective pipe that stretched under pressure. Investigators traced the problems to defective steel produced by several mills, but mostly by Welspun Power and Steel, a manufacturer based in India.

Almost half of the steel in the 30-inch Keystone pipeline came from Welspun and was manufactured about the same time the company provided defective steel on several other pipeline projects. As a result, the Pipeline and Hazardous Materials Safety Administration, the agency charged with oversight of the nation's 2.1 million miles of pipeline, ordered more tests, including on Keystone.

Those recently completed tests identified 47 anomalies where the Keystone pipeline may have expanded beyond agency-stipulated limits.

"Keystone must take appropriate actions to address the anomalies," agency spokesman Damon Hill said in a prepared statement. "PHMSA will evaluate how Keystone addresses the anomalies and take actions necessary to ensure the pipeline's safety is maintained."

The Missouri dig is taking place in the northwest corner of the state in Buchanan County. Presiding Commissioner Royal Turner said he was eager to see the results.

"It may prove out everything is fine, or they may be digging this whole thing up," Turner said. "But the fact they're looking at them and checking them is a good thing."

Cunha said none of the anomalies involved expansions of more than 1.5 percent, the amount at which the federal agency required the pipe be dug up. He said the 10 digs now under way were being done as a precaution.

"We've been cooperative in ensuring we're building a safe pipeline," Cunha said. "Now we're going back and checking it again. I think it shows the dedication and focus we have as a company to operate a safe pipeline."

Each dig (six are in South Dakota, three in Nebraska) exposes about 120 feet of pipe that the company will then measure and visually inspected under government supervision, Cunha said.It remained unclear whether any of the pipe will need to be replaced. The pipeline crosses 280 miles and 10 counties in Missouri and 60 miles and four counties in Illinois, and is buried 4 feet underground in most places. In Missouri, almost all the pipeline route is privately owned and, except in Troy and St. Charles, runs mostly through agricultural areas. The pipeline cuts diagonally through Lincoln County from the northwest, then burrows across northern St. Charles County before plunging 65 feet beneath the Mississippi River and surfacing in Hartford, just a short distance from Roxana. Its skirts Edwardsville on its way to Patoka.

TransCanada has repeatedly assured the pipeline's integrity. Cunha noted that officials from the Pipeline and Hazardous Materials Safety Administration conducted 55 audits during the pipeline's construction, on everything from fabrication to installation to testing, and found Keystone in compliance every time. He also has pointed out that the company's contracts with mills outlined specifications above industry standards, and that the company reviewed manufacturing processes and quality control tests conducted by the suppliers. In addition, the company said it performed its own quality assurance checks after manufacturing. Given all that, Cunha could offer no explanation for the anomalies.

Blackburn said he also was concerned that it took additional government-ordered tests to find problems in a newly built pipeline that otherwise would have gone undetected.

"Think if they ran this kind of … test in pipelines all over the country what they would find," he said.

A year ago, Keystone might have been forced to dig up even more of the line. Since then, the government has relaxed its safety standards for pipe strength. In April 2009, for example, the agency ordered Houston-based Boardwalk Pipeline Partners to replace more than 300 sections of a newly built 42-inch gas pipeline, about half of which had expanded by as little as 0.6 percent.

But then in October 2009, the pipeline agency issued new guidelines. From that point on, only pipe that expanded by at least 1.5 percent would need to be replaced. Companies were told they needed to notify the agency only of expansions of 1 percent or more.

TransCanada officials declined to provide any details about the 47 anomalies, including the percentage of any expansions. Nine anomalies were detected in Missouri, 12 in Kansas, 14 in Nebraska and 12 in South Dakota.

"I'd like to see what the actual anomalies are and if they're similar to the other pipelines,'' Blackburn said. "Just because they're not digging it up doesn't mean there's not a problem."

Meanwhile, last month, Plains Justice issued a report that questioned TransCanada's ability to respond to a major leak on the Keystone line. The report concluded that TransCanada lacked adequate amounts of prepositioned equipment to respond to spills, especially in rural areas, a charge the company denies.

"It's a bit like having the fire department show up to put out the ashes," Blackburn said of TransCanada emergency response plan. "Sure, they can come hours or days later, but they end up mopping up spills rather than preventing them from spreading in the first place."

A sampling of oil pipeline spills

While the pipeline is about to go online bringing Canadian crude oil to the Wood River refinery in Roxanna, the administration of President Ba…

About half the steel used in the new Keystone oil pipeline, which runs through the St. Louis area, comes from a foreign manufacturer that supp…

Roxana • A major oil pipeline between Canada and the U.S. seemed like a pretty good idea five years ago.

May 6, 2010--- This pipe runs through an area cleared for the Keystone pipeline in Edwardsville. The Keystone pipeline will carry crude oil from the Canadian tar sands in Alberta to the Wood River refinery in Roxana and on to Patoka, Illinois. The pipe is shot from the Madison County Transit Watershed Trail in Edwardsville, a sign on the trail identifies this area as carrying the pipe. Emily Rasinski erasinski@post-dispatch.com