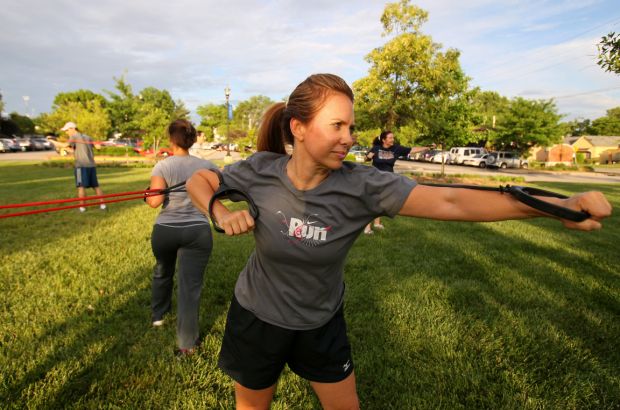 Kim White, of Richmond Heights, works out during an exercise class, Thursday, May 29, 2014 at The Heights community center in Richmond Heights. White, who battled breast cancer in 2009, has been attending the weekly exercise class nearly two years. Photo by Roberto Rodriguez, rrodriguez@post-dispatch.com 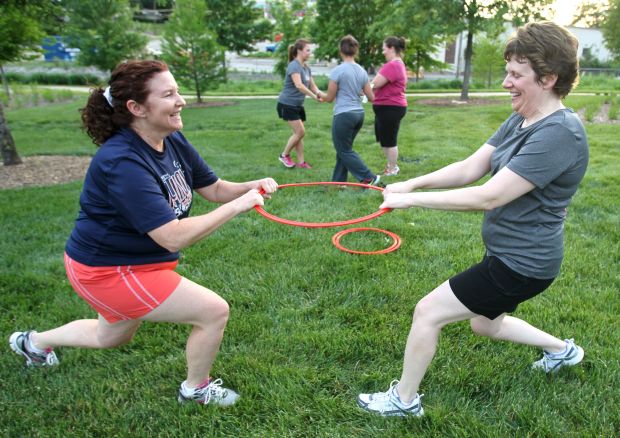 Mary Griser, of Fenton, left, and Tracy Wetteroff, of St Louis, who both battled breast cancer, work out during an exercise class, Thursday, May 29, 2014 at The Heights community center in Richmond Heights. The Siteman Cancer Center funds the weekly exercise class aimed at cancer patients. Photo by Roberto Rodriguez, rrodriguez@post-dispatch.com 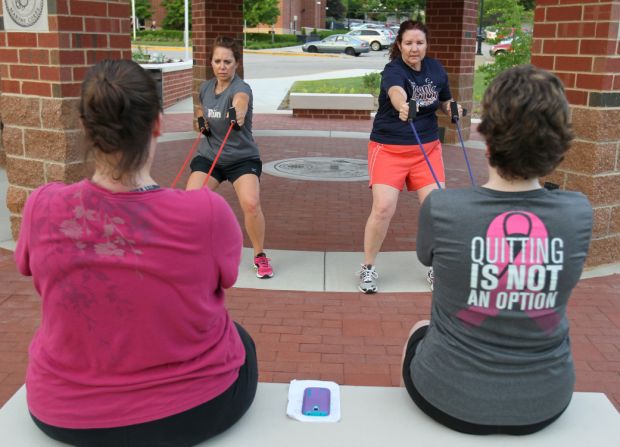 Kim White, of Richmond Heights, clockwise from top left, Mary Griser, of Fenton, Tracy Wetteroff and Cindy Dineen, both of St. Louis work out during an exercise class, Thursday, May 29, 2014 at The Heights community center in Richmond Heights. The Siteman Cancer Center funds the weekly exercise class aimed towards cancer patients. Photo by Roberto Rodriguez, rrodriguez@post-dispatch.com

Mary Griser used to exercise so she could eat Taco Bell whenever she wanted and look good in her blue jeans. That was before she was diagnosed with breast cancer at the age of 41.

“Instead of exercising so I can fit in my jeans, I now exercise because of my health crisis,” said Griser, now 49, of Fenton.

About 40,000 breast cancer survivors and supporters will run and walk in the 16th annual Komen St. Louis Race for the Cure on Saturday. The 5K race not only raises thousands of dollars for breast cancer programs and research, it promotes exercise — which science is linking to a range of physical and emotional benefits for cancer survivors, especially breast cancer.

Many studies have looked at how weight gain and obesity affect outcomes in cancer patients, but research on physical activity is relatively new.

Most studies on exercise and cancer have been published since 2009, and a recent compilation of those findings shows that while exercise is linked to decreases in deaths from some cancers, the strongest association is among breast cancer survivors.

“You can lower risk of dying from breast cancer, and you can lower your risk of it coming back,” said Dr. Stephanie Schnepp, a breast surgeon at St. Mary’s Health Center.

Exercise can be especially important for young breast cancer survivors, who are more likely to be diagnosed with aggressive types of tumors and have their cancer return after treatment.

Because of the importance, the Young Women’s Breast Cancer Program at Siteman Cancer Center nearly three years ago began offering a free weekly exercise class, open to any adult cancer survivor diagnosed at age 45 or younger, held at The Heights community center in Richmond Heights.

The program recognizes the barriers survivors face despite their strong motivation. Maintaining an exercise routine, or starting one, is challenging enough without feeling sick and tired from radiation or chemotherapy. Moves can be even more intimidating when limited or sore from surgeries. Competition and judgment are hard to escape.

Griser has been taking advantage of the free class at The Heights since its inception. On a recent Thursday night, she and about a dozen other cancer survivors were led through a kickboxing workout. After completing a challenging series of uppercuts, kicks and hooks in sync, Griser and two-time breast cancer survivor Tracy Wetteroff, 43, slapped hands in celebration.

Sometimes, Griser said, they are mad at their bodies for failing them despite their best efforts. They wonder: Why bother?

“All these women,” Griser said, “are struggling to love their bodies again enough.”

Strides are being made, but challenges remain in improving outcomes for younger women diagnosed with breast cancer.

Younger women are more likely to get triple-negative breast cancer, which lacks three hormone receptors that are targets for treatments. It tends to grow faster, come back early after treatment and spread.

Because they are younger, they have a longer time to worry about cancer returning. And they tend to be treated more aggressively with chemotherapy and radiation, which have their own troublesome side effects.

Early detection helps, but often young women or their physicians assume that when they feel a lump, it is a cyst or some other benign mass, Schnepp said. “They may not end up getting imaging studies or seeing a physician who specializes in breast problems as soon as older woman may …,” Schnepp said. “Younger women should get the same serious evaluation for the possibility of cancer when needed that older women do.”

Researchers aren’t sure why exercise is particularly beneficial after breast cancer. Schnepp said it may be because reducing the number of fat cells limits the body’s ability to make estrogen and fuel estrogen receptor cancers. Or that exercise helps improve healing and regeneration.

Schnepp refers her patients to Livestrong, a free 12-week program for survivors and their families that involves twice-weekly exercise and education classes at nearly a dozen YMCAs. The YMCA of Greater St. Louis and the Lance Armstrong Foundation brought the program to the area four years ago.

While exercise and weight loss together produce the best outcomes, benefits are still seen without tipping the scales, Schnepp stresses.

“I always try to emphasize that a lot with patients. I say don’t get discouraged because you are not losing the weight you want to lose,” she said. “It is still making a difference and is helpful for you physically and mentally.”

Jennifer Ivanovich, director of the Young Women’s Breast Cancer Program, comes every week she can at The Heights. She often runs around mid-class, giving everyone high-fives.

“I go because I’m selfish. I get inspiration from them,” Ivanovich said. She sees people come during their chemotherapy or who do as much as they can while sitting in a chair, and those who lose weight or are finally able to feel good while on a walk with their children.

Ivanovich started the young survivor program in 2001 after seeing four women with breast cancer who were younger than her in her clinic. At the time, she was 31.

She began by volunteering to create a journal of women’s stories. The program has grown to include support and education, research and now exercise thanks to a grant from the U.S. Centers for Disease Control and Prevention and a donation from the St. Louis Men’s Group Against Cancer.

Program members were asking for an exercise class. They were seeking the physical and mental benefits. Dealing with cancer can leave one feeling out of control, and exercising is a way to regain some of that power.

“Exercise helps us all from a psychological standpoint, and when it’s done in a community that understands why you are there and different from people on the other side of the gym, that can be incredibly supportive,” Ivanovich said.

Exercise can also be a welcome alternative to traditional support groups. “Some people may see a support group as a sitting around, holding hands, ‘Kumbayah’ sort of thing,” Ivanovich said. “You might not want to go to a support group, but you’ll go to a yoga class. It’s a normal thing that young people do.”

After twice getting breast cancer before the age of 40, Wetteroff, of South County, had a double mastectomy six years ago. She gained three dress sizes as she recovered. The class at The Heights has helped her get active again, lose 15 pounds, find her confidence and feel better about her body, she said. “It makes you feel more normal.”

And to people walking around the track above them or the basketball players whose stray balls roll into their circle, Wetteroff and the others look like any other exercise group with their yoga mats and hand weights.

But a quiet understanding brings them together when it’s difficult to come. After telling the class to jab the air like a punching bag, instructor Dawn Brown reminds them, “Remember to smile. It burns more calories!”

Survivorship Exercise Group -- free weekly exercise class held at 7 p.m. Thursdays at The Heights, 8001 Dale Avenue, for any adult diagnosed with cancer at age 45 or younger. To register, contact Kim Selig at 314-747-7156.

LIVESTRONG -- a 12-week wellness program for adult cancer survivors that meets twice a week at 11 area YMCAs. Survivors and their family receive a free three-month membership. Participating YMCAs can be found under the programs tab at ymcastlouis.org.

Breast cancer stories big on celebrities but too light on science

They share their stories in their own words of how they beat the disease.

Melissa Hamilton was 13 weeks pregnant with her second child when she was diagnosed with breast cancer last year. Sandra Burkel credits a ma…

Kim White, of Richmond Heights, works out during an exercise class, Thursday, May 29, 2014 at The Heights community center in Richmond Heights. White, who battled breast cancer in 2009, has been attending the weekly exercise class nearly two years. Photo by Roberto Rodriguez, rrodriguez@post-dispatch.com

Mary Griser, of Fenton, left, and Tracy Wetteroff, of St Louis, who both battled breast cancer, work out during an exercise class, Thursday, May 29, 2014 at The Heights community center in Richmond Heights. The Siteman Cancer Center funds the weekly exercise class aimed at cancer patients. Photo by Roberto Rodriguez, rrodriguez@post-dispatch.com

Kim White, of Richmond Heights, clockwise from top left, Mary Griser, of Fenton, Tracy Wetteroff and Cindy Dineen, both of St. Louis work out during an exercise class, Thursday, May 29, 2014 at The Heights community center in Richmond Heights. The Siteman Cancer Center funds the weekly exercise class aimed towards cancer patients. Photo by Roberto Rodriguez, rrodriguez@post-dispatch.com