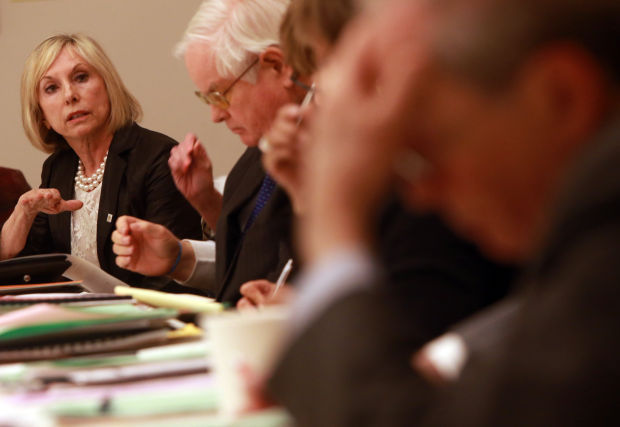 Pat Whitaker (left), a Zoo-Museum District board member, speaks during a board meeting on Monday, April 21, 2014. At issue was a potential conflict of interest because Arcturis, a company she founded, won a contract to design an addition to the St. Louis Science Center. Photo by Christian Gooden, cgooden@post-dispatch.com 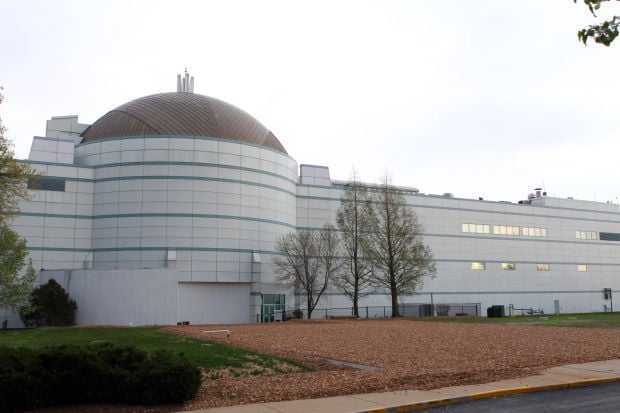 The west side ofthe St. Louis Science Center, photographed on Monday, April 21, 2014. An addition is planned for the site, where the Exploradome once stood. Photo by Christian Gooden, cgooden@post-dispatch.com 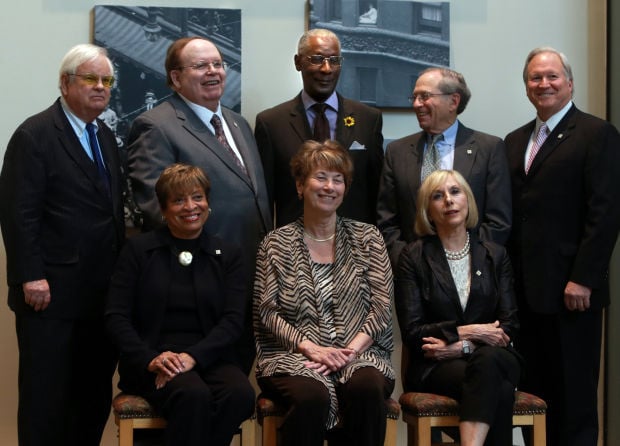 ST. LOUIS • Pat Whitaker, founder and chairman of local design firm Arcturis, quit the Zoo-Museum District board Tuesday, following revelations that an institution paid by the board had awarded her company a contract worth tens of thousands of dollars.

In her resignation letter, Whitaker defended her actions, saying she had asked for advice from the board’s attorney, “and followed that advice.”

“I resign with a heavy heart,” she wrote in the letter, “but I do so in hope that everyone can get back to the business at hand and continue to develop the ZMD into the premier national model that it has become.”

Whitaker publicly disclosed Monday that Arcturis had won a contract to design a $1.2 million to $2.5 million pavilion at the St. Louis Science Center, which receives $10 million a year in property tax dollars collected by the Zoo-Museum District.

Some Zoo-Museum District directors immediately denounced Whitaker’s dual role. At least two called on her to step down. Whitaker said Monday night she was not considering it.

But an aide to St. Louis County Executive Charlie Dooley said Tuesday morning that the situation was news to Dooley. Whitaker hadn’t told Dooley that she had bid on the project when he appointed her to the board in January, said spokeswoman Pat Washington. Dooley, Washington said, was “deeply disappointed.”

And by 3 p.m., Washington said Whitaker had submitted a letter of resignation.

Dooley called it “unfortunate” but “the best decision for everyone involved.”

“I’m sure it was a difficult personal decision,” Dooley said in a statement provided by Washington. “But I know Pat did not want to have the board be distracted from its work.

“And I appreciate her acting as quickly as she did,” Dooley continued.

Whitaker’s four-month tenure on the board followed a rocky period of conflicts of interest involving the St. Louis County Police Board.

A few days later, Post-Dispatch stories revealed that a company co-owned by police board chairman Gregory Sansone, a Dooley appointee, had secured a $3.7 million heating and air-conditioning contract at the county’s new crime lab.

By the end of August, Sansone had resigned, kicking off several rounds of nominations, rejections and more searches for new candidates.

In October, County Councilman Steve Stenger pledged to “clean house” and announced he would run against Dooley in the August Democratic primary.

At the same time, the Zoo-Museum District board was deeply and often bitterly divided. Board members Gloria Wessels, Charlie Valier and Jerry Glick fought fervently for more change at the History Museum, in the wake of a report that the museum had, years prior, bought a plot of land from former museum board member and city Mayor Freeman Bosley Jr.

When Glick’s term expired in December, Dooley declined to reappoint him. Dooley said Glick contributed to the “hyperbole and atmosphere” that prevented the Zoo-Museum District from doing its job.

On Jan. 7, he appointed Whitaker, noting her community service, position with Arcturis and graduation from the Harvard University School of Design.

Two days later, Whitaker acknowledged that her attendance at Harvard was a summer program — not a degree. Her résumé and application had been unclear, at best.

When the news broke Monday about Arcturis’ pending contract with the Science Center, Dooley said he was blindsided. He didn’t know about the Arcturis bid, he said at Tuesday night’s County Council meeting.

Whitaker said Arcturis bid on the contract last fall. She learned a month ago that the team, which included architect Gyo Obata and their consultants, was “shortlisted” for the job, to design an indoor-outdoor pavilion as part of a large new exhibit focused on farming and agriculture.

At that point, she said she consulted district counsel Mike Chivell, of Armstrong Teasdale, who said her company’s proposal with the Science Center was not, at that time, a conflict.

Science Center President and CEO Bert Vescolani said Tuesday that he wasn’t worried about the project, and gave no suggestion that Arcturis would lose the job.

Some Zoo-Museum District board members said Whitaker’s resignation was probably for the better.

“I felt she had to resign,” said former Florissant Mayor Robert Lowery. “For the best of all concerned.”

The board is plenty divided now, he said; it’ll be good to put this to rest.

Board chairwoman Thelma Cook declined to speculate. “I think she exercised her options,” Cook said. “We have one less member at this point. The board will move forward with the seven members it has, until another member is appointed.”

But Valier, who has been agitating for a more active board for months, hoped the incident would lead the directors to further examine their ethics policies, and, perhaps, beef them up.

“I believe the real issue here all along has been the (Zoo-Museum District),” he said. “The ZMD represents the taxpayers. If the taxpayers have no confidence in the ZMD’s ability to ferret out problems, and correct them, then the whole concept of a tax-supported district for these cultural institutions is nothing.”

Steve Giegerich of the Post-Dispatch contributed to this report.

Time for a refresher on officials' ethics

With reference to the articles "Picking up travel tab" and "Firm that won science center bid has board tie" (April 22), maybe some elected off…

No excuse for board members' questionable dealings

Regarding "Whitaker leaves museums board" (April 23):

The Science Center board agreed to hire Arcturis two days before Whitaker voted to send the center $10 million in tax dollars.

'I’m glad we’re finally doing something,' one board member says.

FOUL: Ethics dilemma for the ZMD

This is taxpayers' money and those who don't want to be good guardians should be removed, not put in charge.

Last week, I visited the Missouri History Museum with my grandchildren ages 3 and 1. I had previously been to their marvelous "250 in 250" exh…

Beverly Strohmeyer has guided the agency through some of the most challenging years in the council’s existence, one board member said.

One member says board is trying to "avoid another Pat Whitaker scenario."

After heated meetings, multiple code revisions and eight months, board risks adopting policy some feel is worse than current.

If the Zoo-Museum District board of directors wasn't responsible for managing more than $70 million of taxpayers' money, their actions would almost seem funny.

But, they are so they're not.

Firm that won Science Center bid has tie to board member

Pat Whitaker, founder of Arcturis, notified fellow board members that her company had been picked to design an exhibit on the Exploradome site.

Dooley lauds board appointee as Harvard grad, but she isn't

She listed Harvard on top of resumé, but says she actually has an associate’s degree from a school called the Tobé-Coburn School for Fashion Careers

Pat Whitaker (left), a Zoo-Museum District board member, speaks during a board meeting on Monday, April 21, 2014. At issue was a potential conflict of interest because Arcturis, a company she founded, won a contract to design an addition to the St. Louis Science Center. Photo by Christian Gooden, cgooden@post-dispatch.com

The west side ofthe St. Louis Science Center, photographed on Monday, April 21, 2014. An addition is planned for the site, where the Exploradome once stood. Photo by Christian Gooden, cgooden@post-dispatch.com