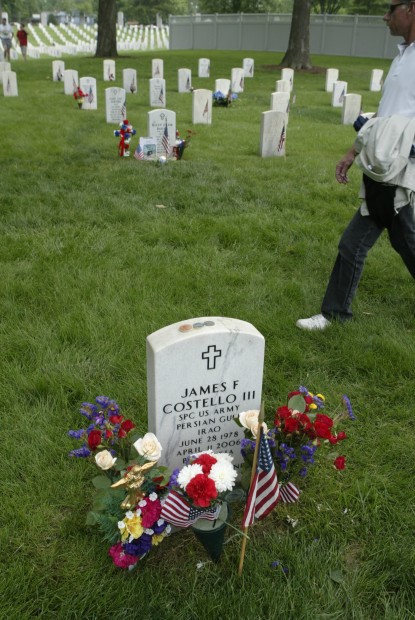 MAY 28, 2007 - The gravesite of James F. Costello, III at Jefferson Barracks National cemetery off Sherman Drive, South St. Louis County, who died in Iraq, on April 11, 2006. 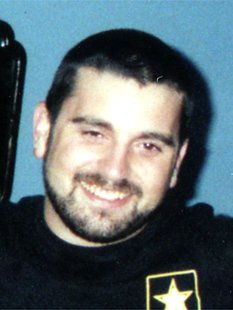 Pfc. Jamie Costello in an undated photo provided by family. He was killed in Iraq on April 11, 2006.

The latest troops to die in combat come here, to section N.

The section is small and sits on a sloping hill behind an administration building, beyond a fence. It is tucked in a corner, so close to the main entrance of Jefferson Barracks National Cemetery that it is easily overlooked, potentially lost among the 166,000 graves spread over 333 acres.

It was Memorial Day, and a grand ceremony was taking place about a quarter-mile away in another part of the cemetery. The annual event featured speeches, honor guards and a crowd of hundreds.

From section N, the one set aside for active-duty deaths, it was possible to hear only the faintest sounds of music.

"Too bad they don't have a microphone, a sound system, " Marie Costello said.

They sat in folding camping chairs next to a grave marker bearing the name "James F. Costello III, " their son. They called him Jamie. He was a 27-year-old Oakville native. An Army soldier. He died April 11, 2006, when an improvised explosive device detonated in Iraq.

Jim Costello wore his son's dog tags around his neck. He watched his wife place flowers at the graves of others killed in action.

"We're kind of a community, " Marie Costello said, clutching red and peach roses. "So I try to share the flowers."

They have gotten to know the other families who have lost sons and daughters in the ongoing wars. Jim Costello knows that the father of Riley E. Baker, a 23-year-old Marine sniper killed on June 22, 2006, in Iraq, likes to leave a bottle of Wild Turkey whiskey at his son's grave, located one row behind Jamie Costello. The two fathers sometimes share a swig.

Jefferson Barracks is both a quiet, respectful place and a bustling center. About 20 funerals take place at the cemetery every day, mostly for World War II and Korean War veterans who pass away in old age.

The cemetery does not keep a count on the number of Iraq and Afghanistan active-duty troops buried here. Officials estimated the number is fewer than a dozen. But the number is growing. Jim Costello could tell you that just from the frequent visits to his son's grave.

"Riley wasn't here yet. Nor was Russell, " Jim Costello said, twisting in his chair to count the graves added since his son's. "One, two, three. ... At least five new ones since we've been coming out to see Jamie."

And Ryan Garbs, 20, an Edwardsville man who was one of eight soldiers killed Feb. 18 in a helicopter crash in Afghanistan.

The latest arrival is Brandon L. Wallace, 27, a Jefferson County native who was killed April 14 in Iraq. His marker is just a few down from Jamie Costello's.

Jamie Costello grew up about three miles away in Oakville. He went to grade school just up the street. Father and son used to drive by the cemetery all the time.

Now it is the father who comes, sometimes with his wife and sometimes alone, to spend some time with his son, in section N.

MAY 28, 2007 - The gravesite of James F. Costello, III at Jefferson Barracks National cemetery off Sherman Drive, South St. Louis County, who died in Iraq, on April 11, 2006.

Pfc. Jamie Costello in an undated photo provided by family. He was killed in Iraq on April 11, 2006.