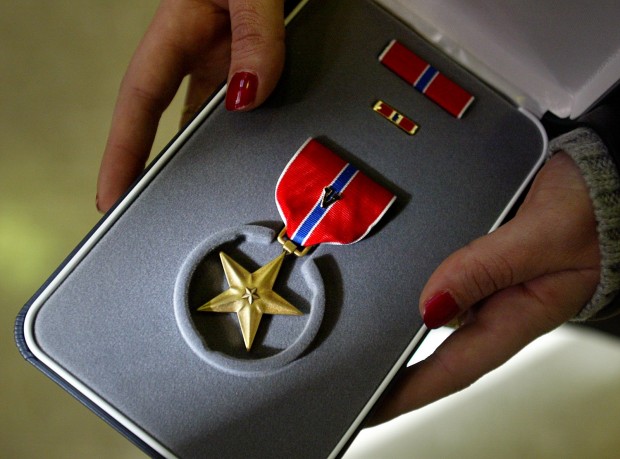 Mary Belchik of Alton, wife of Marine Cpl. Christopher Belchik, holds the brozen star posthumously awarded to her husband on Nov. 9, 2004. He was killed in Iraq's Anbar province on Aug. 22, 2004. Photo by Huy Richard Mach of the Post-Dispatch 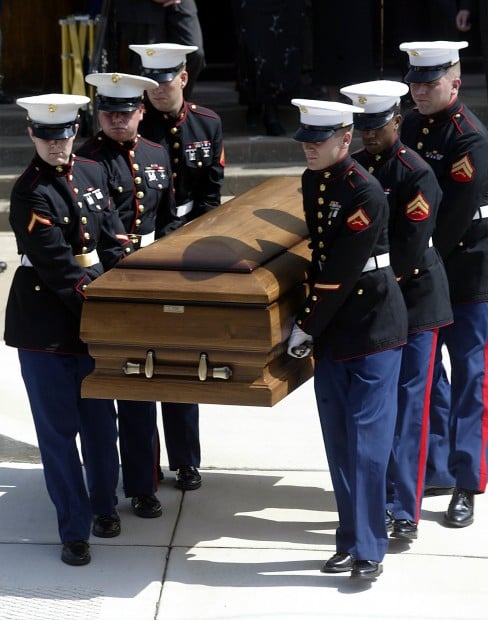 Marines carry the casket of Cpl. Christopher Belchik to the hearse after a funeral service at St. Peter and Paul Catholic Church in Alton on Aug. 28, 2004. Belchik was killed in Iraq on Aug. 22, 2004. Photo by Sam Leone of the Post-Dispatch 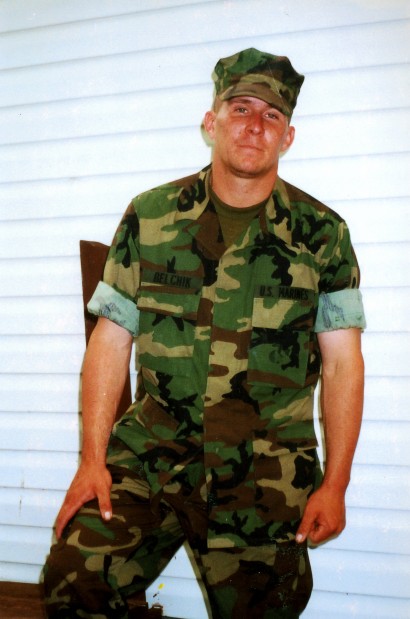 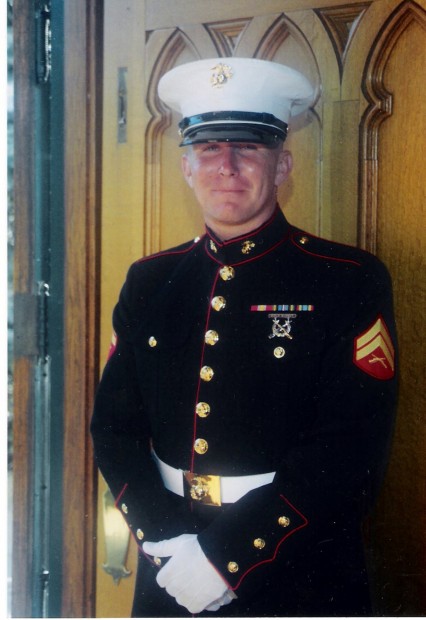 Cpl. Christopher Ward Belchik, who was killed in Iraq in August 2004.

"While conducting numerous combat operations, Corporal Christopher Belchik led his squad with intensity and fearlessness while engaging the enemy in intense combat at Fallujah and Al Mahmudiya, " Master Sgt. Pat Guinn read from a citation.

"On 26 April, with his platoon attacked from the rear by an enemy fire team attempting to ambush his patrol, his violent response halted the enemy attack, driving them away.

". . . Corporal Belchik gallantly gave his life for his country."

Lt. Col. Dave Taylor, the base commander, stepped forward. He placed the black box containing a Bronze Star with "V" for combat valor into the hands of Mary Belchik, 27, a bride and a war widow within a span of 14 months.

Christopher Belchik, 30, a native of the Alton-Godfrey area, was killed in Iraq's Anbar province on Aug. 22 by a mortar round. Earlier that day, he had saved the lives of Marines in his squad when he discovered mines planted near their position, according to the citation.

He had worked as a hod carrier for several years before meeting his wife. They married in June last year while Christopher was home on leave.

Christopher's family and friends streamed into the flag-draped hall on Tuesday to honor his memory.

They spoke in small groups, and hugged each other in heartbreak.

They gathered to look at the medal that Cristopher's mother, Lynn Lenker, was now holding.

Lenker, her body worn thin by multiple sclerosis, talked quietly about her boy.

"Ever since Chris was little, I had this sadness about him, this heavy heart, " she said. "I worried about him more than I did my other children. I didn't know why. Now I know why."

Christopher's father, Stephen Belchik, a strongly-built man, wore a Purple Heart medal on the lapel of his gray suit. The lapel pin was given to him by the Marine Corps to commemorate his son's death.

"We gave Chris a hard time about going into the Marines because we were a Navy family, " he said with the trace of a smile. "His dad, his uncles, all Navy."

Then his lips quivered.

"He'd have been home by now, " he said, turning his face.

Most of the crowd dispersed after an hour, leaving members of the immediate family to huddle with a few Marines from the base.

They talked together softly, their voices occasionally drowned out by the roar of jet planes.

Christopher's mother was introduced to Master Sgt. Guinn, a veteran of 29 years in the Marine Corps.

Guinn told Lenker that he had been her son's commander on board the Austin, an amphibious transport ship.

"He was a hooligan, wasn't he?" Lenker asked, warming to the burly Marine.

Christopher's sister, Julie Prats, 34, of Chicopee, Mass., laughed as she recalled her brother's passion for golf, and his comic timing.

"Someone would propose betting on a shot, " she said, "and Christopher would do that line from the movie 'Caddyshack': 'Gambling is illegal at Bushwood, sir, and I never slice.' "

Nearby, Brian Belchik, 36, told two Marines that he had considered naming his newborn son, born in September, after his brother.

"I couldn't name him Chris, because I just wasn't ready to start saying that name so soon, " he said. The Marines nodded in sympathy.

Christopher's mother stepped away from the group to get a fresh tissue.

A gold crucifix dangled from a chain around her neck, and she pressed it against her breast.

She said Chris had been tough, but never a bully.

"I'd get on him for fighting, and he'd say, 'Mom, I wasn't fighting for myself, I was sticking up for my friends, '" she said.

"He was a big, tough Marine. But not around me. With me, he was always my sensitive, little boy."

Mary Belchik of Alton, wife of Marine Cpl. Christopher Belchik, holds the brozen star posthumously awarded to her husband on Nov. 9, 2004. He was killed in Iraq's Anbar province on Aug. 22, 2004. Photo by Huy Richard Mach of the Post-Dispatch

Marines carry the casket of Cpl. Christopher Belchik to the hearse after a funeral service at St. Peter and Paul Catholic Church in Alton on Aug. 28, 2004. Belchik was killed in Iraq on Aug. 22, 2004. Photo by Sam Leone of the Post-Dispatch

Cpl. Christopher Ward Belchik, who was killed in Iraq in August 2004.