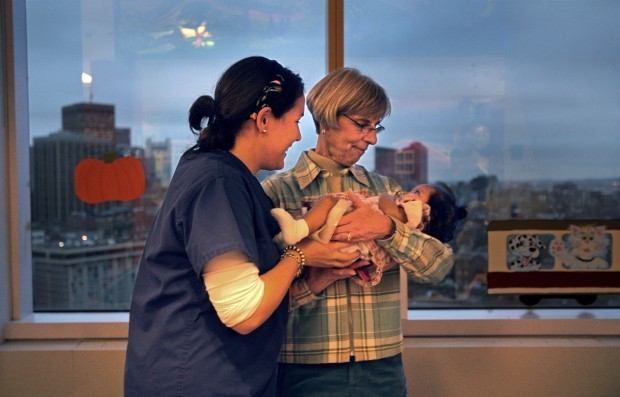 Maureen Walsh (right) of Overland Park, Kan., holds baby Mariam with nurse Katie Dinare at Massachusetts General Hospital in Boston last month. Walsh's son, before he was killed in Iraq, had worked to help bring Mariam to the U.S. for surgery. She had a rare birth defect: bladder exstrophy. (Michele McDonald | The Boston Globe) 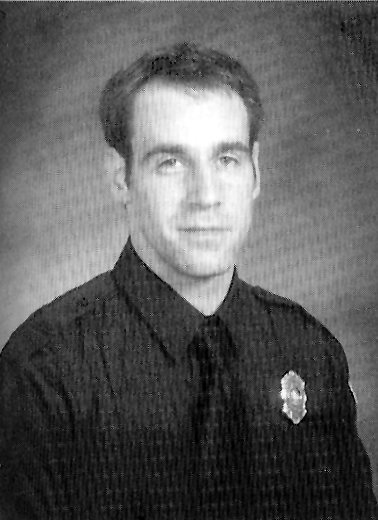 Capt. Sean Donovan had never had to write a letter like this before, a letter to a mother about a son who had died.

He was convinced that writing about Chris Walsh, a Navy medic killed Sept. 4 in Iraq, was going to be a terrible task. But tradition and duty made him put pen to paper to describe to Maureen Walsh the kind of person her son Chris was.

It was awful Chris had to die, Donovan wrote. But let me tell you, he continued, what he did to help someone else live.

Maureen Walsh received the letter Oct. 10, the day before her son, an emergency medical technician with the St. Louis Fire Department, would have turned 31.

Until that moment, she'd had no idea that her son had been tending to a sick baby he'd seen in Fallujah. That he'd made it a mission to help her. And that his efforts and those of others in his unit had gotten the baby girl to Boston for necessary surgery.

"It was like somebody had given me a gift, " said Maureen Walsh, of Overland Park, Kan.

It by no means erased the pain of losing a son. But it lessened it.

"It's something happy that came out of this, " she said.

Christopher G. Walsh, one of five children in his family, grew up in suburban Kansas City and moved to the St. Louis area after graduating from high school. A grandfather and an uncle had been firefighters and his father was a medic in Vietnam, but Maureen Walsh thinks it was Chris' desire to help people that led him to become an EMT.

"He couldn't stand to see anyone who was weaker or less fortunate be taken advantage of or hurt in any way, " his mother said.

He joined the city fire department in 2001 but came to think his skills would be better used in the military, so he signed up for the Navy Reserve.

He left for Iraq in March, assigned to a U.S. Marines weapons company.

In June, while on patrol in Fallujah in Anbar province, a bomb exploded in the road near the vehicle that carried Walsh and three Marines, Donovan said. The soldiers spotted the person they thought had triggered the explosion and took off in pursuit.

"They went through the neighborhood, " Donovan said, "and a lady came out holding this baby and calling to them for help: 'Baby sick.'

"The whole of everything that happened turned on the decision that they made right on the spot. They had to decide, 'Either we chase the triggerman or we help the baby.' ... They took care of the baby."

Just a few months old, her name was Mariam and she was terribly ill. Walsh snapped pictures of her with a digital camera and took them to Donovan, a physician.

The photos showed a rare birth defect, bladder exstrophy, in which the bladder develops outside the body. Walsh said he wanted to help her, and everyone from the battalion commander on down agreed, Donovan said.

As Walsh and others in the unit made regular secret nighttime visits to check on Mariam, others in the battalion made contact with willing doctors at Massachusetts General Hospital for Children. But there was still so much to arrange and, with the unit's rotation about to end, little time left.

Then, on Sept. 4, a bomb exploded under a Humvee carrying Walsh and three others about a mile from Mariam's home, according to a story in the Boston Globe. Walsh, Cpl. Jared Shoemaker of Tulsa, Okla., and Lance Cpl. Eric Valdepenas of Seekonk, Mass., were killed.

The deaths were a devastating blow, Donovan said. But rather than sparking any need for retribution, they prompted a redoubling of efforts to take care of Mariam, he said.

By early October, when Walsh was to have returned home, Mariam was on her way to Boston with her grandparents. After her surgery, Donovan, back at Camp Pendleton near San Diego, received a call from one of the doctors in Boston. It was a success, Dr. Rafael Pieretti reported.

"We just went nuts, " Donovan said of the unit. "The mix of sad and happy is just difficult to describe."

As she read the letter from Donovan - a letter that ended up being far easier to write than he had imagined - she knew she had to see that baby.

"They had described her as practically lifeless, and she wasn't that at all anymore, " she said.

Maureen Walsh (right) of Overland Park, Kan., holds baby Mariam with nurse Katie Dinare at Massachusetts General Hospital in Boston last month. Walsh's son, before he was killed in Iraq, had worked to help bring Mariam to the U.S. for surgery. She had a rare birth defect: bladder exstrophy. (Michele McDonald | The Boston Globe)