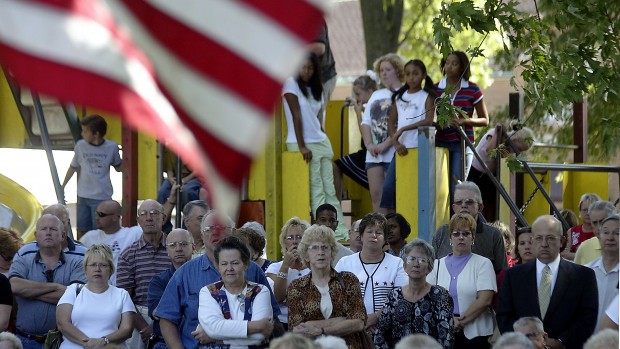 The memorial service for Marine Lance Cpl. Drew Uhles drew about 800 people from Du Quoin, Ill., to the town's park on Sept. 19, 2004. That day would have been Drew's 21st birthday. Photo by Sam Leone of the Post-Dispatch 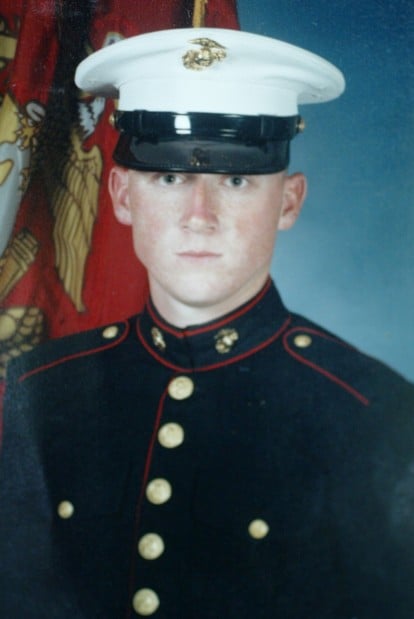 DU QUOIN, ILL. • The town gathered Sunday under the shade of oak trees, following a path of American flags that led to one flying at half-staff. Hundreds came to honor one of their own — a polite, quiet small-town boy killed last week by hostile gunfire in Iraq.

"We were all supposed to get together to play dominoes and eat pizza when he got back," his stepcousin Emily Brock, 24, said.

Uhles, a lance corporal in the Marines, was serving his second tour of duty in Iraq when he was killed in the Al Anbar province early Wednesday morning. His hometown held a public memorial and prayer service in Keyes City Park.

Friends hugged, many wiped away tears, while others stood stoically, holding their hands behind their backs. They comforted one another and offered prayers for the Uhles family.

"We are so sorry he had to give his life, yet we are so proud, so proud that he gave it so willingly," said the Rev. Bob Dickerson, one of the organizers of the event.

"This is a community thing," he said, describing the event.

When the mother of a solider stationed in South Korea read a piece titled "A Mother's Prayer," it hit home for many of the military families in the crowd. Irene Swallers' son served a year in Iraq with Uhles' brother. Swallers, 42, of Du Quoin, said the ceremony brought back a lot of memories of the year her son spent in the war. It also reminded her how lucky she was that her son arrived home safely.

"We didn't know how lucky we were," her husband, Joe Swallers, added.

Even those unconnected to the town found a connection to Uhles. A fellow Marine explained why he had driven 40 miles to honor a Marine he had never met.

Retired Sgt. Michael Oberline, of Anna, Ill., served two tours in Vietnam. He remembered visiting the Vietnam Memorial in Washington years later. Standing near the wall with the names of the fallen, a woman approached him and asked:

"Did you know any of them?"

He came Sunday dressed in full uniform with a card for the Uhles family. "I never knew Drew, but I knew him," he said.

Two of Drew Uhles' brothers and a cousin attended the event Sunday, and a representative for the family announced funeral arrangements.

Visitation will be from 4 to 9 p.m. Tuesday at Searby Funeral Home in Du Quoin. The funeral will be at 10:30 a.m. Wednesday at St. John's United Church of Christ. Burial will follow at Sunset Memorial Park in Du Quoin.

The memorial service for Marine Lance Cpl. Drew Uhles drew about 800 people from Du Quoin, Ill., to the town's park on Sept. 19, 2004. That day would have been Drew's 21st birthday. Photo by Sam Leone of the Post-Dispatch