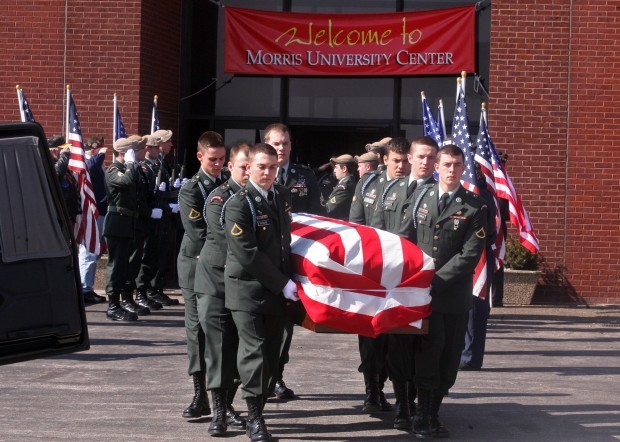 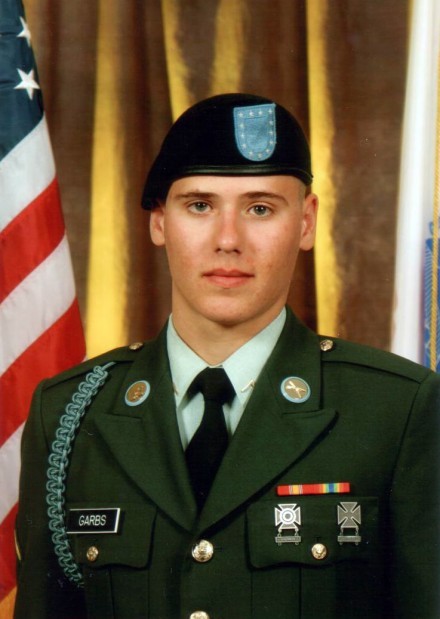 Before the funeral began for Army Spc. Ryan Garbs, photos of his life flashed across two giant screens.

Garbs would later trade those uniforms for the fatigues of an Army Ranger, the uniform he wore in the last picture on the screen, next to the words, "I am an American soldier." Moments later, his flag-draped casket was carried into the Meridian Ballroom of Southern Illinois University Edwardsville. Garbs' mother, Jill Garbs, is an associate professor at the university's Lovejoy Library.

More than 400 people gathered in the ballroom Tuesday to say goodbye to Garbs, a 2005 graduate of Edwardsville High School who went on to join the 75th Ranger Regiment at Fort Benning, Ga.

Garbs, 20, was one of eight soldiers killed Feb. 18 in a Chinook helicopter crash in southeastern Afghanistan. Fourteen others were injured in the crash, which was apparently caused by engine failure. Garbs, who had previously served in Iraq, was posthumously awarded the Bronze Star, the Meritorious Service Medal and the Good Conduct Medal.

Army Spc. Mike Kuhns, who was in Garbs' platoon, said he remembered when they met - he didn't think the mild-mannered Garbs would last six months among the "rowdy Rangers." Within a few weeks, Kuhns knew he was wrong. Garbs headed to the gym after days that left everyone else exhausted and proved that he deserved to be there, Kuhns said.

Getting there had been Garbs' dream since high school, said the Rev. Christopher Ritter, pastor of the New Bethel United Methodist Church in Glen Carbon, which the Garbs family attends.

In high school, Garbs chose an American flag emblem for his class ring and ran with a weight-filled backpack to train to become a Ranger, Ritter said. He was fiercely competitive, whether it was playing board games with his family or as a goalie on the soccer field, where he'd dive into a cloud of kicking feet to stop a score.

"Fear didn't seem to be a word in his vocabulary," Ritter said.

Garbs was tough, but tender - he was never embarrassed to kiss his mom, and his bulletin board was filled with pictures of his dog and cats.

As his funeral procession made its way to Jefferson Barracks National Cemetery, people lined Illinois Route 157 in Edwardsville to show their support. One woman stood outside a beauty salon, her hair covered in foils, waving a flag. Children in front of La Petite Academy waved too. A man stopped in traffic to let the procession pass got out of his pickup and stood with his hand over his heart.

Col. Paul LaCamera, commander of Garbs' regiment in Georgia, said he couldn't be specific about the mission that Garbs was on that ended his life, but he described Garbs as a hero who never let anyone down.