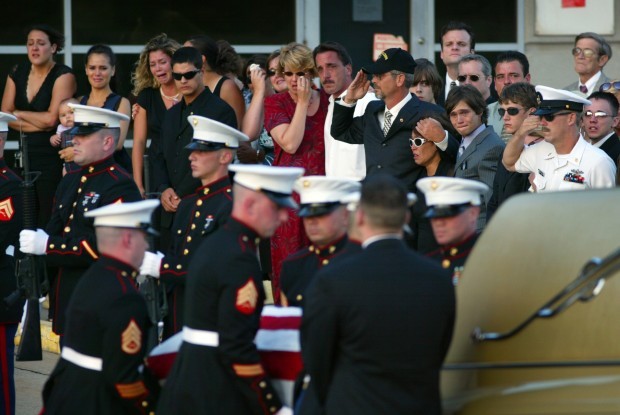 June 26, 2006 -- Family and friends of Christopher White look on as his casket is loaded by a Marine honor guard into a hearse Monday at Lambert Field. White, a 23-year-old Marine, was killed June 20 in Iraq. (David Carson | Post-Dispatch) 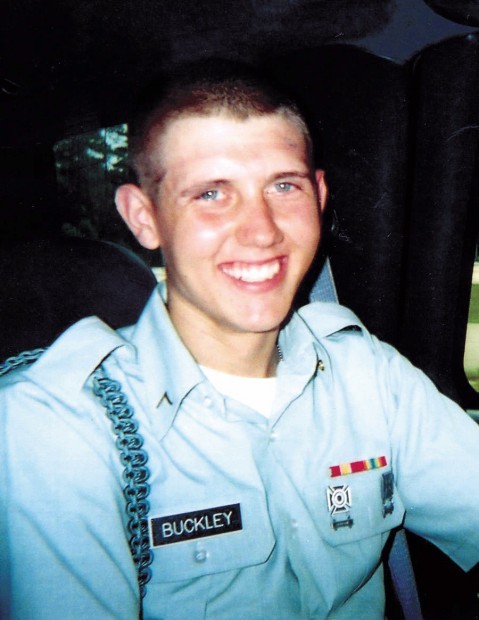 William White of Arnold saluted with his right hand and cradled his wife with his left as he watched his son's coffin pass.

Under the late evening shadow of a giant American flag, about 50 friends and family gathered Monday night at Lambert Field to honor the arrival of the body of Marine Pfc. Christopher White, 23.

White and Army Cpl. Ryan Buckley, 21, of the Hillsboro, Ill., area, are the latest servicemen with regional ties to be reported killed in Iraq.

"He was the type of guy who would make any father proud, " said Jerry Wells, 50, of Valles Mines, who grew up with Christopher White's father. "He was a damn good Marine. There don't come a much better man."

The Marine was killed June 20 in Anbar province in Iraq. White was a machine gunner on an armor-plated vehicle that was struck by an improvised explosive device (IED). Two other Marines also were killed.

He was born in North Carolina, but most of his family lives in the Arnold area. The family moved to Kentucky, and White grew up on a farm in Elizabethtown, Ky. His father had served in the Army and his uncle had served in the Navy.

In a brief ceremony at the airport, family and friends watched Marines load White's casket into a hearse. Relatives said White loved to play practical jokes and loved hunting and fishing. "He was quite the outdoorsman, " said Angie White, a cousin from Louisville, Ky.

White graduated from high school in Kentucky and joined the Marines in May 2005. He was deployed to Iraq in January and was scheduled to return home in August.

He is survived by his father, his mother, Galia White, and his brother, Michael White. A funeral service with military honors will be held at 10 a.m. today at Kutis Funeral Home, 5255 Lemay Ferry Road at Butler Hill Road. A visitation was planned Monday evening at the funeral home. A private interment will follow the funeral service.

Ryan Buckley decided to join the military on Sept. 11, 2001, when he was a junior at Hillsboro High School. He came home from school that day and said he wanted to protect his country from such attacks, said his mother, Sally Nation.

On Friday, Buckley, 21, was killed in Baghdad when an improvised explosive device exploded near his patrol. The army corporal was part of the 101st Airborne Division and was stationed at Fort Campbell, Ky.

Buckley's family on Monday grieved but took pride in his service.

He grew up in Hillsboro, which is about 65 miles northeast of St. Louis in Montgomery County. He had celebrated his one-year anniversary with his wife, Tina, who was raised in Litchfield, Ill., on June 18.

Buckley didn't talk about what he saw or did in Iraq, his mother said. "I think he was protecting me, " she said.

Those who knew him as a high school student had fond memories of him. "I don't know of anyone who didn't like Ryan, " said Mark DalPozzo, director of bands for Hillsboro High School. Buckley played French horn and was in the marching band.

In addition to his wife and mother, among the survivors are his father, Dennis Buckley of Hannibal, Mo.; a brother, a stepbrother, a stepsister and a stepfather.

Buckley's body arrived in Delaware late Sunday. His mother said there would be a funeral in Hillsboro; arrangements were pending on Monday.

June 26, 2006 -- Family and friends of Christopher White look on as his casket is loaded by a Marine honor guard into a hearse Monday at Lambert Field. White, a 23-year-old Marine, was killed June 20 in Iraq. (David Carson | Post-Dispatch)