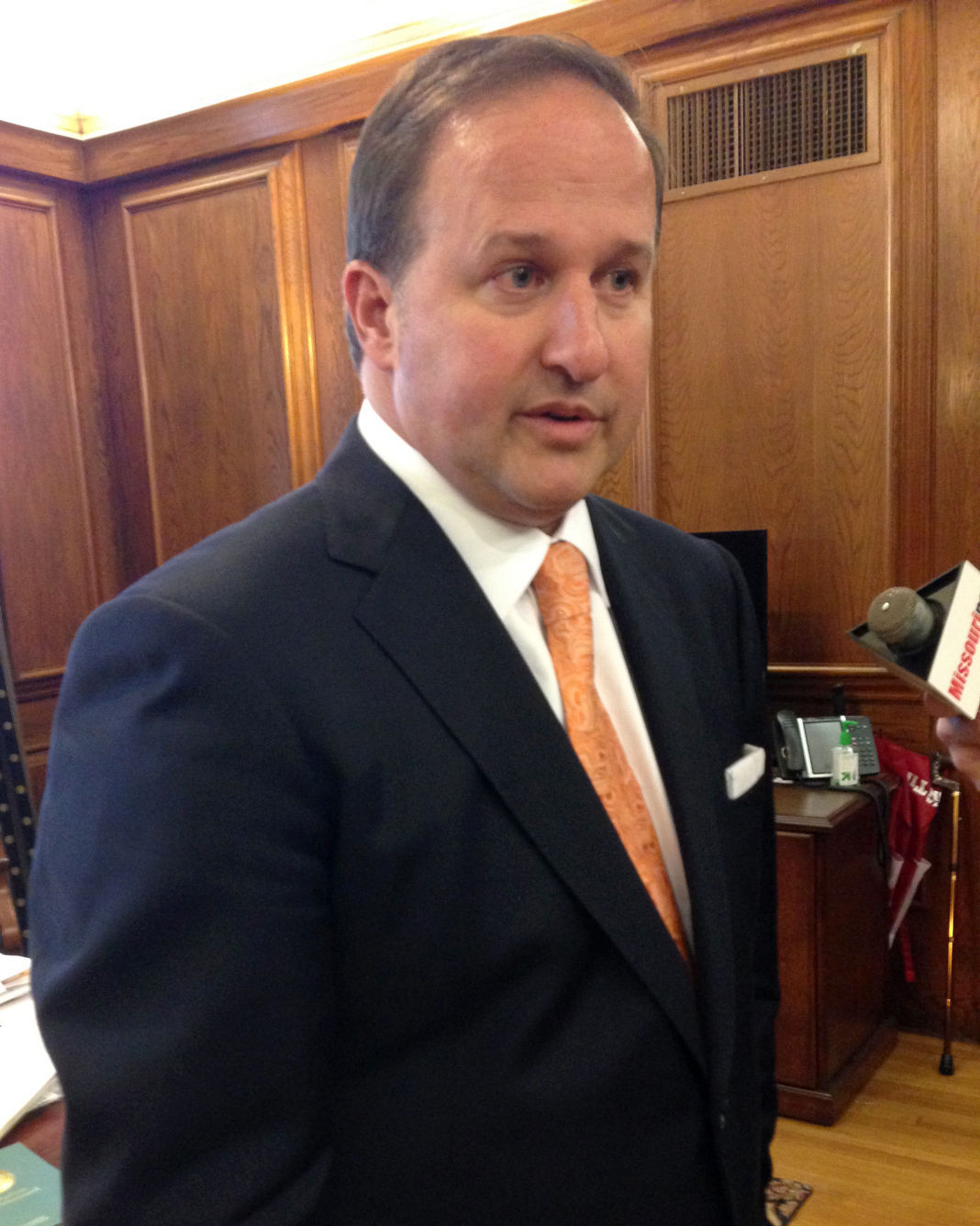 Missouri House Speaker John Diehl announces that he is resigning from the Legislature on Thursday, May 14, 2015. (AP Photo/David A. Lieb) 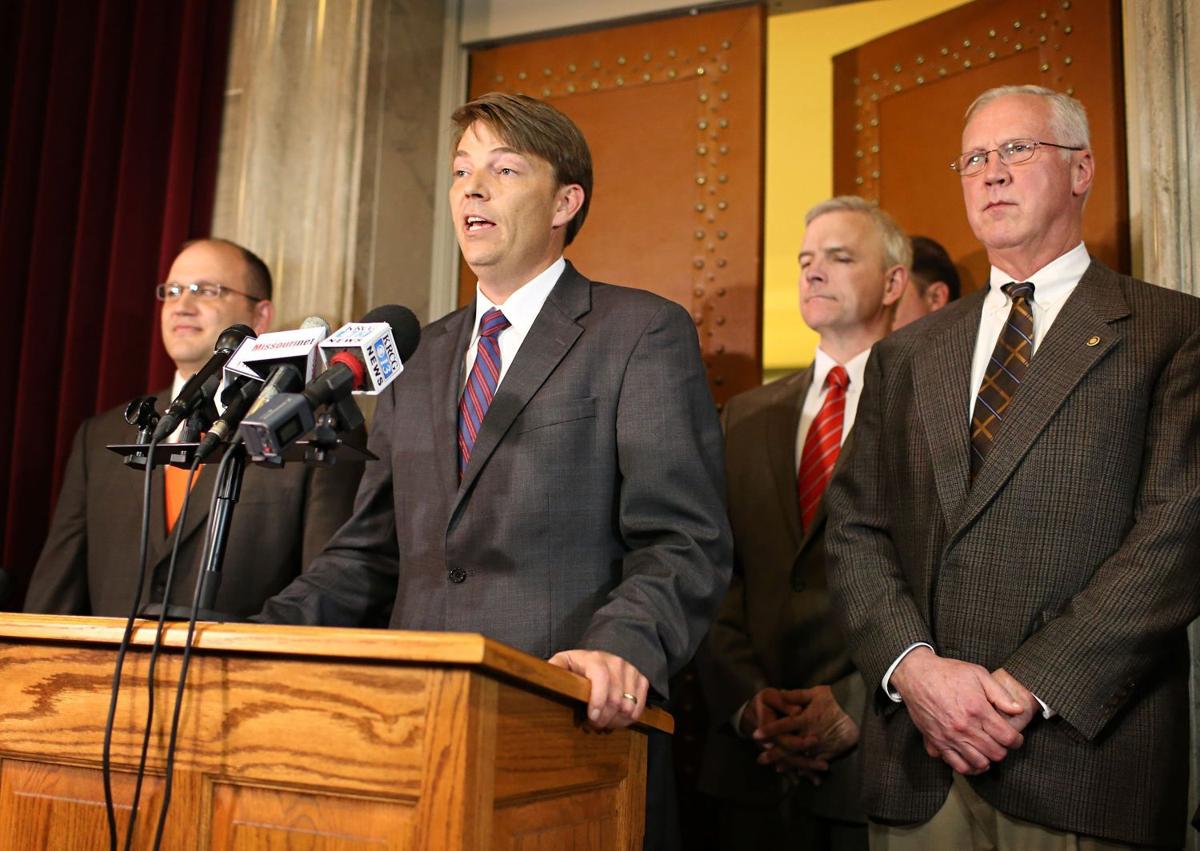 State Rep. Todd Richardson, R-Poplar Bluff, addresses the media during a press conference after he was named Missouri House Speaker at the statehouse in Jefferson City on Thursday, May 14, 2015. Earlier Thursday former Missouri House Speaker John Diehl resigned from both his leadership position and his legislative seat after he acknowledged sending sexually charged text messages to a Capitol intern. Photo By David Carson, dcarson@post-dispatch.com 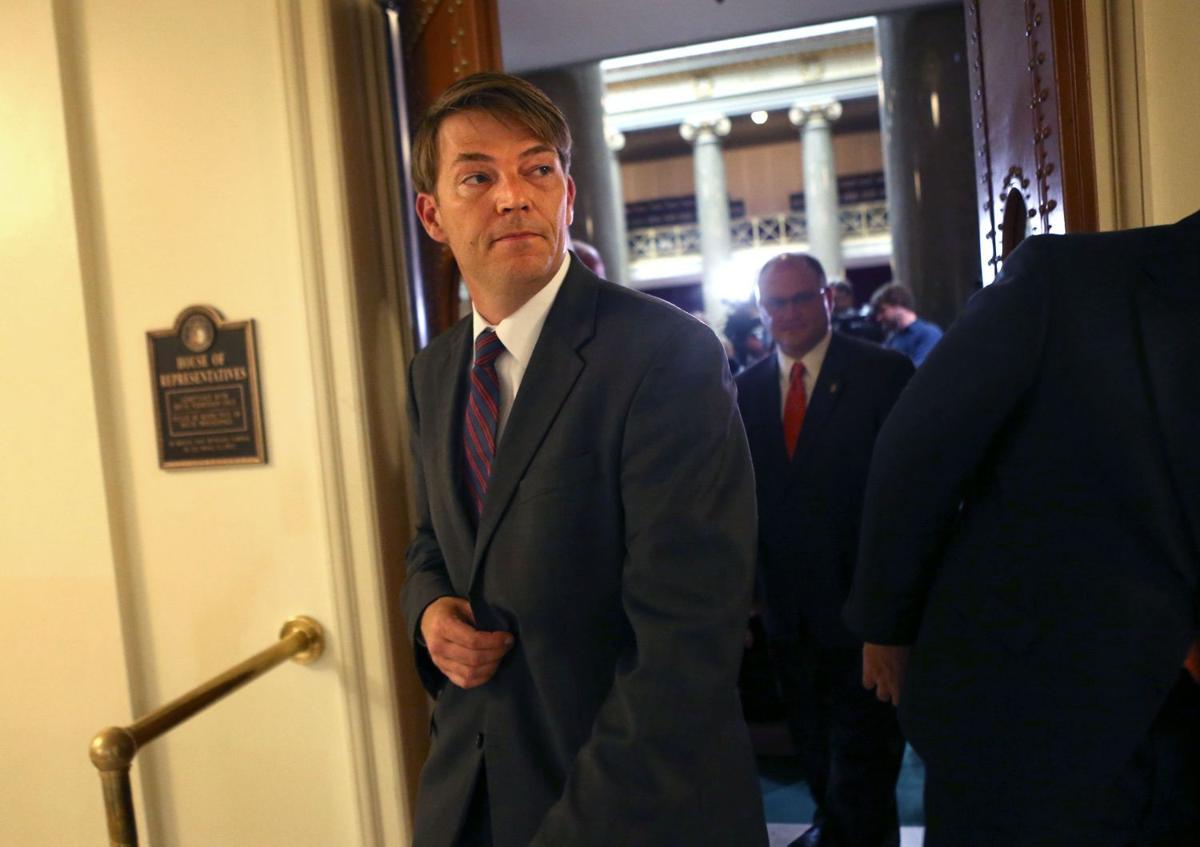 State Rep. Todd Richardson, R-Poplar Bluff, walks to his office after addressing the media after he was named Missouri House Speaker at the statehouse in Jefferson City on Thursday, May 14, 2015. Earlier Thursday former Missouri House Speaker John Diehl resigned from both his leadership position and his legislative seat after he acknowledged sending sexually charged text messages to a Capitol intern. Photo By David Carson, dcarson@post-dispatch.com

It all crumbled in about 28 hours.

Diehl, 49, announced Thursday that he was resigning both the speakership and his legislative seat, a day after the Kansas City Star’s website reported that he had exchanged sexually charged messages with a college freshman who worked as a legislative intern.

Calling the messages “a serious error in judgment,” Diehl, R-Town and Country, said in a statement that he was “willing to face the consequences” and leave public office.

House Republicans held a closed caucus Thursday evening to select a new speaker. They tapped House Majority Leader Todd Richardson, R-Poplar Bluff, who was already in the lineup hoping to succeed Diehl in 2017.

Richardson’s nomination will be put to a vote of the full House on Friday, but that’s just a formality because Republicans overwhelmingly control the chamber. Friday is the final day of the legislative session.

The intern involved in the texting, Katie Graham, 19, of Joplin, released a statement Thursday evening identifying herself, thanking her supporters and expressing hope that the internship program would survive.

“I want to thank everyone who has reached out to me during this difficult time,” Graham said. “Your support means a lot. This is extremely difficult for both families, and I hope everyone can begin the healing process. I strongly support the Missouri Capitol internship program, and hope it remains a positive experience for other students in the future.”

• Universities plan to use 'sexting' scandal as a teaching moment

Thursday’s dramatic events added to the gridlock that already had halted legislative business heading into the final day. Senate Democrats have entombed all remaining legislation in a filibuster. The Democrats are protesting a procedure that Senate Republicans used to pass a “right-to-work” law.

Stuck in the impasse: a bill renewing crucial health care provider taxes that will expire later this year. The taxes are used to draw matching payment from the federal government for the state’s Medicaid program.

On Thursday, the House did no business other than to convene and adjourn twice. Diehl announced his resignation about 1:40 p.m.

“For the good of my party, the caucus, and this state, I’m not going to further jeopardize what we have accomplished this year and what can be accomplished in the future,” he said.

Reports linking Diehl to the intern had been circulating in the Capitol for several weeks, since Missouri Southern State University in Joplin pulled its four interns from the Capitol because of unspecified issues.

On May 1, Diehl agreed to meet with the Post-Dispatch to talk about the allegations at the Clayton office of his political consultant, David Barklage. But despite a staff member’s promise that Diehl would speak for publication, he refused.

He broke his public silence only after The Kansas City Star posted a story Wednesday with sexually suggestive text messages the newspaper said were exchanged by the intern and Diehl.

The texts showed a “flirty rapport and suggest an intimacy” between the two, the newspaper reported. Shortly after that story went online, Diehl left the House dais.

After spending eight hours in his office conferring with colleagues, Diehl issued a statement Wednesday, saying he took “full responsibility” for the exchanges. He did not offer any detail. Diehl finally emerged from his office around 11 p.m. Wednesday but said little to reporters, who followed him down a Capitol stairwell peppering him with questions.

Republican lawmakers had publicly refrained from criticizing Diehl. As they filed out of a closed caucus on Thursday, most did not want to speak, pushing through the throng of reporters without making eye contact.

Rep. Kevin Engler, R-Farmington, however, said he thought Diehl “did the right thing” by resigning.

In a statement, Gov. Jay Nixon, a Democrat, said Diehl’s resignation was “an appropriate and necessary step.”

“Our thoughts go out to the families who have been affected by the speaker’s conduct,” Nixon said. “I look forward to working with the next speaker to restore the public trust and continue building a brighter future for our state.”

In his statement Thursday, Diehl again offered little detail, but repeated his apology.

Democrats had been gathering signatures on a petition to force a vote on whether Diehl should be the speaker. Earlier Thursday, freshman Rep. Lauren Arthur, D-Kansas City, said that Diehl’s problems were “a bigger issue than just a personal failing.”

“This is a person who’s in a position of power and engaged in an inappropriate relationship with a subordinate,” Arthur said. “She’s not here and he is. So I think it’s an abuse of the institution and not just a personal failure.”

But even if the allegations against Diehl are true, sexual harassment would be difficult to prove, St. Louis employment attorneys said on Thursday, judging from the information that has been made public.

There has to be some on-the-job consequence in order to bring a sexual harassment suit, several said — in the most extreme case, for instance, quitting or losing a job.

But it’s not even clear the intern was employed. Missouri Southern State University has previously said interns received 12-hour tuition scholarships and stipends for living expenses, as well as course credit. The House chief clerk said the House does not pay the interns.

The critical question, said attorney Jerome Dobson, is whether Diehl’s conduct was unwelcome. “From what I’ve reviewed, there’s no indication it was,” Dobson said. “In fact, it certainly appears there’s an element of welcomeness to it.”

The tone of the text messages, however, could be misleading, said attorney Mary Anne Sedey. “I’ve certainly seen situations where somebody plays along to hold onto a job, or to get a promotion,” she said.

It would also be difficult, said attorney Ken Chackes, for the intern to sue the university under federal discrimination laws. An attorney would have to prove the university knew Diehl was sending the texts, and didn’t act to stop him, had been warned he might, or was “otherwise deliberately indifferent to the student’s safety.”

Diehl, a real estate attorney, is leaving what many consider the second-most powerful job in state government. Republicans said he had been a strong leader who was adept at bringing people together.

Diehl had been chosen as speaker in January and was first elected to the House in 2008. He is married and has three children.

He served as majority leader before becoming speaker. In that role, he traveled around the state, raising millions of dollars to build the GOP majority. In the last five years, Republicans have picked up 30 House seats.

“He made a mistake, and has apologized,” Blunt said. “He made the right decision today.”

Known as a shrewd deal-maker, Diehl led the successful override of the governor’s veto of a congressional redistricting plan in 2011 and an income tax cut in 2014.

Before he resigned, Republicans stressed that the decision was up to him.

“I’m not going to condemn the guy,” said freshman Rep. Nick King, R-Liberty. “I’m a Christian. I believe we shouldn’t be throwing stones in glass houses.”

David Hunn and Alex Stuckey of the Post-Dispatch contributed to this report.

Outgoing House speaker said he hopes to be remembered for more than sexting episode.

A week of intensive legislative gridlock ends in flurry.

Legislative session leaves many frustrated, but GOP got some priorities through

Nixon stresses the positive in his assessment.

Sources say Reps. Jay Barnes of Jefferson City and Paul Curtman of Pacific changed the tone of the discussion.

Officials cite law for withholding intern info, even though it likely doesn't apply

The issue probably won't be resolved unless someone takes it to court.

First the House, now the Missouri Senate joins in to review intern policies

The Senate currently is dealing with its own intern problems.

Rep. Todd Richardson, 38, is an attorney serving his third term in the House. 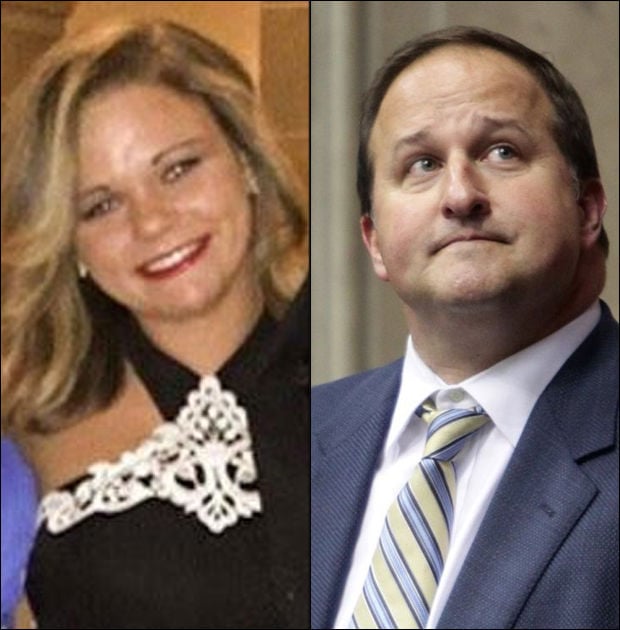 Missouri House Speaker John Diehl announces that he is resigning from the Legislature on Thursday, May 14, 2015. (AP Photo/David A. Lieb)

State Rep. Todd Richardson, R-Poplar Bluff, addresses the media during a press conference after he was named Missouri House Speaker at the statehouse in Jefferson City on Thursday, May 14, 2015. Earlier Thursday former Missouri House Speaker John Diehl resigned from both his leadership position and his legislative seat after he acknowledged sending sexually charged text messages to a Capitol intern. Photo By David Carson, dcarson@post-dispatch.com

State Rep. Todd Richardson, R-Poplar Bluff, walks to his office after addressing the media after he was named Missouri House Speaker at the statehouse in Jefferson City on Thursday, May 14, 2015. Earlier Thursday former Missouri House Speaker John Diehl resigned from both his leadership position and his legislative seat after he acknowledged sending sexually charged text messages to a Capitol intern. Photo By David Carson, dcarson@post-dispatch.com 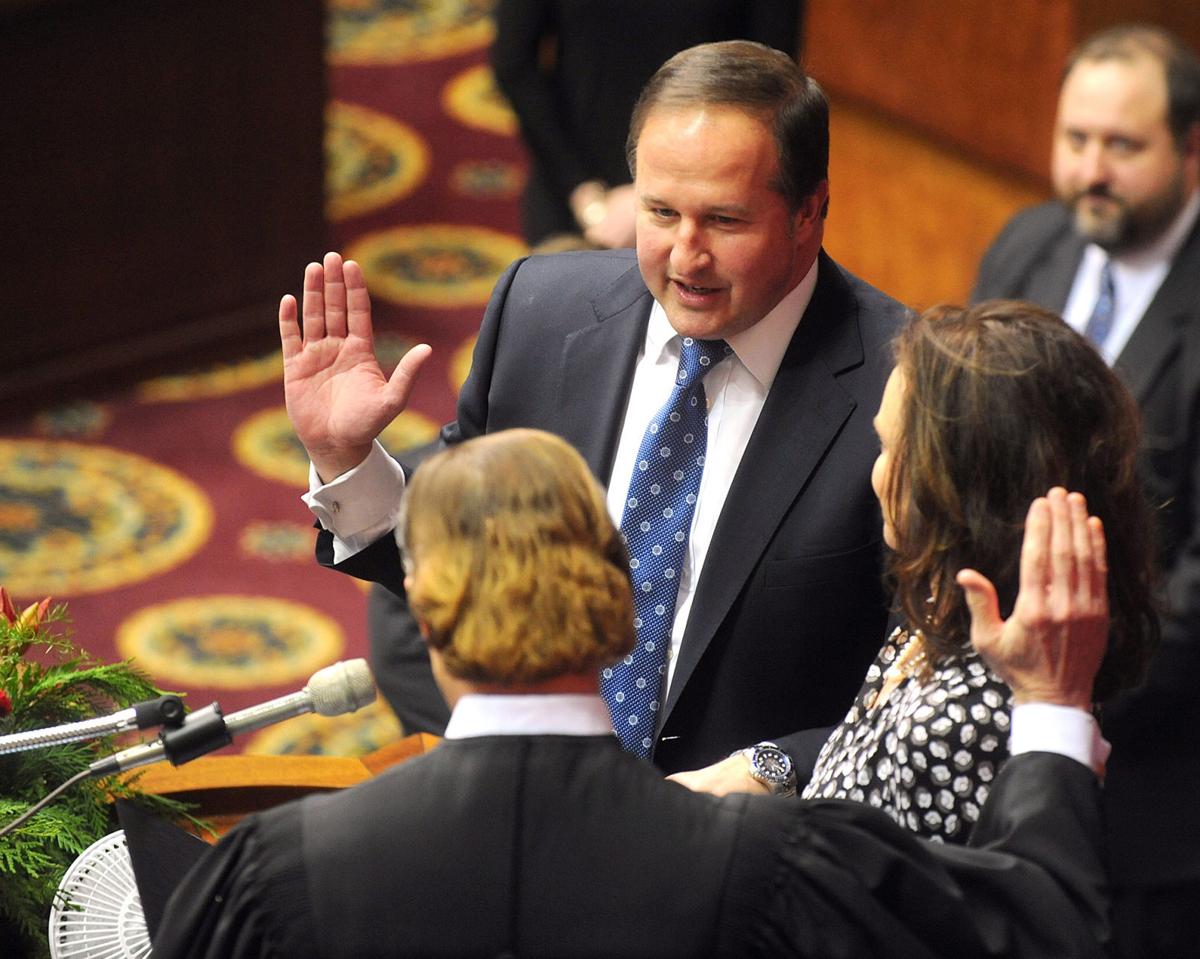 Rep. John Diehl is sworn in as the speaker pro tem of the Missouri House of Representatives during the opening of the Missouri legislature in Jefferson City on Jan. 7, 2015. (Don Shrubshell/The Columbia Daily Tribune via AP)